We all love Thanksgiving but what do we really know about it? By all accounts, people think and thought differently about the holiday through time. Today, we see it as a day of feasting, family, falling asleep to football. But here are a bunch of Thanksgiving facts you didn’t know.

The first Thanksgiving was celebrated in Plymouth, Massachusetts in 1621. Well, if that’s what you believe. Others say that Florida was the site for the first Thanksgiving. Almost 60 years before, a Spanish fleet came into Florida and planted a cross in the sandy beach in St. Augustine. They celebrated their arrival and gave thanks for God’s providence while sharing a festive meal with the native Timucuan people.

The first feast was quite different than what we indulge in today. Instead of a 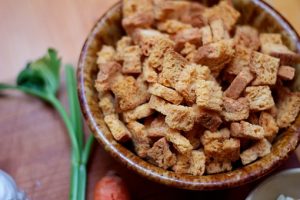 turkey, they would have had deer and lots of local seafood like mussels, lobster, and bass. They would have fruits from the harvest including pumpkins. But if you wanted mashed potatoes, you would have to wait. The starchy vegetable had only recently shipped back to Europe from South America.

The first Thanksgiving (if you believe it was at Plymouth Rock) was a three day celebration.

Thomas Jefferson refused to declare Thanksgiving as a holiday when he was president. Jefferson strongly believed in the separation of church and state and since Thanksgiving involved prayer he thought that making it a holiday would violate the First Amendment.

In 1939, Thanksgiving was celebrated on the third Thursday in November, not the fourth. What? Since its recognition years before, the holiday had been celebrated on the fourth Thursday of the month. It wasn’t until President Roosevelt “bumped up” the holiday to the third Thursday of the month to make way for, yup you guessed it, Black Friday. They switched it back in 1942 because Americans didn’t like the change.

It was a turkey mistake that inspired the first TV dinners. The year was 1953 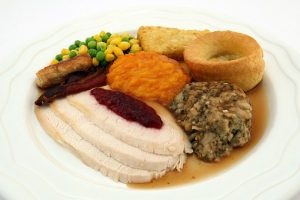 when a Swanson employee accidentally ordered 260 tons of Thanksgiving Turkeys. To get rid of them all a salesman named Gerry Thomas thought of an idea. He proposed that they fill 5,000 aluminum containers with turkey- and cornbread dressing, gravy, peas, and sweet potatoes. They sold for $.98 back then and they were a hit. Within one year, over 10 million of these dinners were sold.

Not everyone eats turkey on Thanksgiving. What? Why wouldn’t you? 12% of Americans are non Turkey dinner eaters. Are these Thanksgiving facts blowing your mind?

Your meal could be a whopping 200+ grams of fat. If you’re wondering, you should have this amount of fat over three to four days, and certainly not in one meal. And if you’re wondering about calories, it could be over 3,000 just for Thanksgiving dinner alone. That’s right, your eating almost an entire pound of fat. Yike.

dinner. A 2015 Harris poll resulted in Americans agreeing that extra stuffing, mashed potatoes, and pie beat out the holiday dinner itself.

Whether you eat turkey on Thanksgiving or wait on leftovers which most of us apparently prefer anyhow, Happy (almost) Thanksgiving!