Sharks are often considered ferocious man-eating apex predators of the sea. While their infamy is actually mostly unwarranted, stories and movies of shark attacks have cemented their reputation in our collective subconscious.

At least we can all breathe a sigh of relief with the fact that sharks are confined to the seas. On hard, dry land, we’re safe and sound, far beyond the reach of their gnashing jaws.

Yeah, about that… A team of researchers has recently discovered four new shark species in Australia that can walk on land.

Great, we have walking sharks now. Seems about on par with how 2020 is going.

In all seriousness, though, there’s no need to worry. The roughly three-feet-long creatures in the genus Hemiscyllium are a threat only if you’re a sea snail.

“At less than a meter long on average, walking sharks present no threat to people. But their ability to withstand low oxygen environments and walk on their fins gives them a remarkable edge over their prey of small crustaceans and molluscs,” the study’s lead author Dr. Christine Dudgeon from the University of Queensland said in a statement.

“These unique features are not shared with their closest relatives the bamboo sharks or more distant relatives in the carpet shark order including wobbegongs and whale sharks.”

It takes a bit of good faith to call what the sharks are doing “walking”, though. It’s really closer to a slow crawl along the ocean floor, aided by their fins. Just take a look.

Still, it’s a lot more than most sharks can do. And, like said, the sharks can shuffle about on dry land for a good long moment before they start choking. 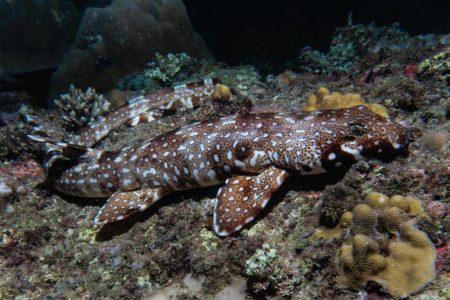 Turning Back the Molecular Clock

Scientists may have found the four  new species only recently, but they have known about walking sharks for ages. These new additions bring the total number of known walking shark species to nine.

Calling these four “new discoveries” is also relative. Science takes a long time – 12 years in the case of this study – and the researchers encountered two of the new species already in 2006.

But what really sets the walking sharks apart from their strictly swimming brethren is actually how young they are. Again, relatively.

“We set out to determine when these curious little critters evolved from their shark ancestors by using a technique called ‘dated molecular clock methodology’,” the study’s co-author Mark Erdmann from Conservation International says.

The research methodology involved using shark fin clippings – comparable to using toe nail clipping from people – to acquire genetic material. The scientists then compared mutations in each shark species to estimate when they branched away from their forebears into new species.

Sharks in general are the old crotchety boomers of the vertebrate animal world. They’ve been around for some 400 million years – predating even dinosaurs by 200 million years.

“Amazingly, we discovered that walking sharks evolved just 9 million years ago, making them the ‘youngest’ sharks on our planet,” says Erdmann.

Spawn of the ‘Island Disco’

This actually brings us to the main point of Dudgeon’s and Erdmann’s study. They wanted to figure exactly how the walking sharks diverged from their parent species and decided to start crawling.

“Speciation typically happens when individuals of a given species get separated from their main population — sometimes by walking or swimming or being carried away on a current to an isolated place,” explains Erdmann.

The nine known species of walking shark are found exclusively in a ring around Northern Australia, New Guinea and the satellite islands of Raja Ampat, Aru and Halmahera in Indonesia. Erdmann says that they usually spend their entire lives on the reef they hatched on, unable or unwilling to venture out across the deep seas.

In the scientists’ minds that begged a question – how could they then possibly have gotten separated from their kind?

Some of the previously discovered walking sharks likely became separate species through gradual expansion of their population range. Rising sea levels or new rivers may have been responsible for giving birth to a couple of the species.

The four new species are different, though. The researchers believe they hitched a ride on a floating island. Yes, on an island.

“We know that island fragments around Australia and Southeast Asia have been constantly spinning, splitting apart and smashing against each other — it’s basically an island disco,” Erdmann explains.

It’s common knowledge – at least to those studying such things – that 10 million years ago some island fragments traveled northwest from the coast of southwestern New Guinea. Eventually tectonic movement smushed the fragments together into what is now known as Halmahera Island.

“These islands potentially transported walking sharks to the Bird’s Head Seascape in Indonesia, where they likely radiated into the four species we can now find in West Papua,” says Erdmann.

The Search for the ‘Special Sauce’

The sharks seem to have adapted well to their unwitting move across the ocean. At least after they learned how to walk.

Erdmann says they’re tough little troopers, able to survive even in extremely hot environments. Unfortunately, the coral reefs they live on are not.

Our oceans are heating up due to climate change and the warmer waters are proving fatal to corals, says Erdmann. Together with the corals, many species that the walking sharks feed on are dying.

“Fortunately, many of the walking sharks are already at least partly protected by regional marine protected areas where human activity is restricted, preventing overfishing and keeping the waters healthy,” he says.

The researchers plan to continue their studies. Erdmann says there is plenty to learn about the resilience of the sharks in the face of changing environmental factors.

“Any time you have an animal or plant that can survive in these extreme conditions, there is typically something unique about their genes — a ‘special sauce’. Exploring the genetic basis behind these unique traits in walking sharks could give us invaluable knowledge as we try to adapt to the impacts of climate change,” he says.

That’s all well and good. But there’s one more important question at least this author would like the scientists to answer.

If these little sharks can relatively quickly learn how to crawl onto land… Do we need to worry about Great Whites doing the same?