Subway was the healthiest fast food restaurant for years in a row, and more recently has come under fire for using “fake” tuna, or better yet no tuna, in its tuna salad sub. Nonetheless, here are a bunch of Subway subs to help you get hungry for your next meal.

This sub is weak at best. What should be a delicious, moist piece of chicken comes up dry and flat. It doesn’t look or taste roasted. And apparently tuna isn’t the only meat under question, as the oven roasted chicken isn’t fully chicken, either. Subway’s “chicken” is made up of actual chicken DNA but otherwise is mostly soy. On the plus side, this sub is only as messy as you make it, so it could be a good on the go. But it’s not even all chicken, and it doesn’t taste oven roasted, so this sub only gets a 3/10. 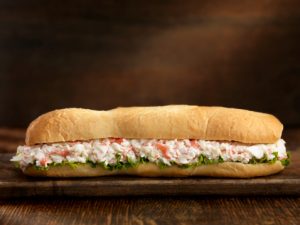 So the above mentioned tuna situation just happened within the last couple of weeks. The tuna ingredients came out as not being tuna. But this is my rating, and I love the tuna there, real or not. People call it soggy, messy, and smelly. The mayo in it makes it fluffy, the oregano on top after gives it extra flavor and on a toasted bread, yum. However there was a Subway employee who said this about the tuna: “Your Subway tuna sandwich is 90% mayonnaise. How did we prepare the tuna? Take one can of tuna the size of your fist and empty it into a vat. Take a big 2ltr bag of mayonnaise and splosh it in the vat. Mix it haphazardly for 2 minutes until it’s a semi-consistent mush. Cringe when customers ask for ‘just a little bit’ of light mayo on their tuna sandwich because they’re on a diet.” For some people there is no such thing as too much mayo, and in the case of this sandwich, I guess I am some people. Tuna gets a 8/10 from me.

This is a healthy option for sure because, you know, vegetables. But if you go on adding cheese or mayo or a different sauce or other condiments, it can quickly become not so healthy. But even as a veggie-loving person or vegetarian, this sandwich is really a let down. The writer Adam Rathbarth put it in “Vice,” “As a vegetarian sandwich, the Veggie Delite absolutely fails. It comprises only raw vegetables, nothing cooked, and there isn’t even a recommended sauce or topping to tie the flavors and textures together.” Vegetarians aren’t really catered to at Subway but a few stores did start selling Meatball Marinara with plant-based fake meat, which is a tasty choice if you can find it. The veggie delite though, only gets a 2/10 rating. 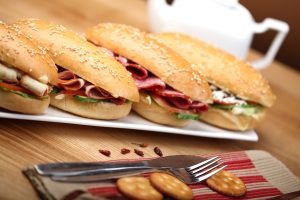 With ingredients like chicken, bacon, Monterey cheese, and veggies, this sub could be delicious. However, it isn’t delicious. It lacks flavor, is messy, and quickly becomes unhealthy if it has too much ranch on it, which is really the only thing that gives it any flavor at all. A low 3/10 rating for this one, too,  and a hearty don’t waste your time.

Pepperoni and Genoa salami come together on this sandwich and they don’t disappoint. Layer the Spicy Italian with banana peppers, one of the good oils, oregano, and toast it for an additional texture. YUM. This may not be considered the healthiest of options but if protein helps keep you full then there’s lots of that. It’s also full of flavor and texture. This sub is a solid 8/10 and highly recommended. 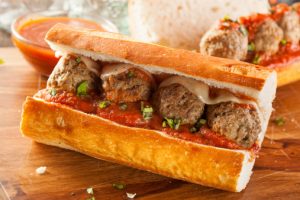 This is a popular one, the people love it. Meatballs with sauce, parmesan cheese, a sprinkle of oregano, and all on toasted bread, what more could you want? There is also the plant-based Beyond Meat Meatball Marinara that was introduced to select stores in September 2019. Both are delicious and either one will calm your Italian craving. This is a 9/10 sub for sure.