When I say they, I mean overwhemingly men, are acting out about wearing masks.

We all know the masks are a control thing. If it’s not medical grade, it’s just cloth over your face.

Anyhow, I digress. Men especially seem to think they can skirt the rule, or act a fool if they are asked to uphold it. On airplanes, in stores, or in this case, the local Dairy Queen.

A man in Canada was asked to wear a mask in a Dairy Queen restaurant. He got irritated when asked and urinated on the counter.

A video of the incident, which reportedly occurred on Saturday night on Vancouver Island, British Columbia, was posted to Facebook. You can hear him arguing with the employees in the video.

The man is heard shouting  “You do not have a brain” to the workers behind the counter. The worker asked the man to follow the rules, saying that he wouldn’t be served unless he wore a mask.

“What are the rules?” the man responded, before saying: “BC policy says you have to observe exemptions.”

The staff member replied: “Sorry, I don’t want to argue with you, we have customers standing behind you, we want to serve them.” 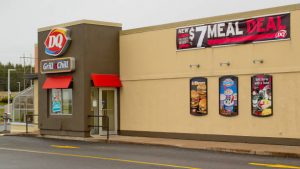 From here, the man swore, unzipped his pants and peed on the counter. Staff is heard screaming in horror as they watch the scene unfold.

“This is the first incident of this nature,” Royal Canadian Mounted Police Sgt Chris Manseau told CTV. He added: “I think people should just wear their masks and be safe and be polite.”

No arrest has been made but police are asking all of those who took video to share it with investigators. Really what is wrong with people though? Follow the rule, go through the drive-thru or eat somewhere else, simple.