Colombian drug lord Pablo Escobar was not a nice man. Although he did use his dirty money to build houses and community projects in poor areas of his country, he was also directly responsible for hundreds, if not thousands of murders.

Although Escobar has by now been dead for almost two decades, his legacy lives on. Some remnants of his Medellín drug cartel still exist, as do many of the buildings he had constructed.

But there is another thing Escobar left behind that continues to cause problems in Colombia. We’re not talking about drugs, guns, or anything so obviously malicious – we’re talking about hippos.

You see, Escobar had a penchant for exotic animals. And since he was one of the richest people in the world at the height of his power – bringing in an estimated $70 million per day – he could indulge in his love for strange creatures.

His private estate, known as Hacienda Nápoles, included an entire zoo filled with elephants, antelopes, exotic birds, ostriches – and hippos. When Escobar died in 1993, no one was left to look after the animals.

Most them were removed to other parts of the world or, unfortunately, put down. But not the hippos.

Officials at the time deemed them too aggressive and difficult to seize and move, so they were left to their own devices. The general assumption probably was that they would soon enough die off naturally.

Instead, the exact opposite happened. Now the hordes of hippos are threatening Colombia’s ecosystem. 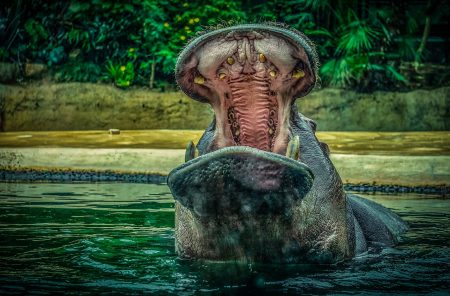 Scientists are warning that unless the cocaine hippos are sent to join their previous owner, according to New York Post. They say that the hippos are breeding at an uncontrolled speed and unless something is done, they’ll reach dangerous numbers in the next 20 years.

According to researchers and environmentalists, there are somewhere between 80 to 100 hippos roaming Colombia, all descended from Escobar’s four beasts. They have spread far and wide from Escobar’s old estate and are constantly claiming more ground along the Magdalena River, reported CNN.

They have no natural predators, and so the hippos are free to keep making babies, most of whom survive to adulthood. Experts speculate that there could soon be 1,500 hippos in Colombia.

“Right now, the authorities don’t consider the species to be a problem,” said Enrique Zerda Ordóñez, a biologist at Colombia’s National University.

“But in the future, when there are 400-500 hippos, it could represent a threat to the survival of other species that feed in the same areas.”

It’s not just animals the hippos could endanger, either. If they continue breeding uncontrollably, they could soon clash with human residents within their territories.

In case you didn’t know this beforehand, here’s an interesting nature fact for you. Hippos are notoriously violent psychos.

Their plump and docile appearance might fool you, but make no mistake. These beasts are out for blood – in fact, they’re the single deadliest large land mammal in the world.

In their native Africa, an estimated 500 people die every year from hippo attacks, said the BBC. In 2014, for example, an enraged hippo capsized a small boat, killing or drowning 13 people.

They’re a threat to more than just boats, too. The nearly three-ton beasts can charge surprisingly fast, and inside that rotund snout are massive sharp teeth.

Oh yeah, and they weight up to three tons. They don’t even need those teeth to kill you, they could just tackle you and sit down.

Running Out of Options

So what’s there to do about these giant beasts? Well, the options are at this point kind of limited, according to experts.

“Relocation might have been possible 30 years ago, when there were only four hippos,” said ecologist Nataly Castelblanco-Martínez.

Since the hippos are pretty much immovable objects, Castelblanco-Martínez ruefully suggests that they must be met with an unstoppable force. That would be a large-caliber bullet.

“Nobody likes the idea of shooting a hippo, but we have to accept that no other strategy is going to work,” she said.

Other options have also been suggested. David Echeverri Lopez head of forests and biodiversity at the CORNARE regional environmental agency, said that the authorities are trying to castrate and sterilize the hippos.

Unfortunately, this doesn’t seem like an effective option. It seems that the Colombian government doesn’t have the money or willingness to enact an effective sterilization program.

“Castration could … have been effective if officials had provided sufficient resources for the program early on, but a cull is now the only option,” Castelblanco-Martínez said.

Echeverri prefers sterilization, but he is not under the illusion that it will be a perfect solution. He said that it will be “practically impossible” to sterilize all the hippos and some will have to die.

“But there are some other animals that are located in certain areas, in lakes and places that allow for a birth control plan to be put in place, assuming that adequate resources are available,” Echeverri added.

Even after two decades, the legacy of Pablo Escobar’s drug empire is felt throughout Colombia. We’ll have to see if officials can control the hippos, or whether they will meet their end much in the same way as their old master – riddled with bullets.