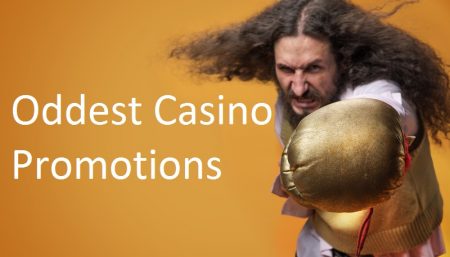 How far are you willing to go to make your products or your website become known? Well, for some casino websites, they are willing to go as far as they will have a crowd playing their games. Of course, traffic to a casino website can be obtained using diverse ways, but there are some odd ways that you won’t believe happen.

Promotions and marketing are all about tactics and knowing what your audience loves and offering it to them. There are some of the oddest casino marketing and promotion tactics that you should know. And, hey, don’t be surprised that they happened. Here are some of them: 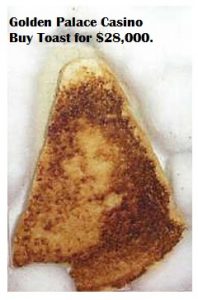 It is unbelievable how some Canadian online casinos do weird things to promote their brand and get the attention of the world. One of the weirdest marketing tactics that has ever been seen involved GoldenPalace.com and Diana Duyser.

This Canadian gambling site claims to be one of the best online casinos and of course, it came at the limelight of the globe when it auctioned a partially eaten sandwich cheese which had a resemblance crust of the Virgin Mary.

Diana Duyser claimed that she had made the cheese 10 years ago and when she had a bite on it, she saw Virgin Mary staring at her and the snack remained mold-free for 10 years. That’s funny.

You will be surprised to know that they auctioned the cheese for $28,000. I know you could be wondering what the cheese has to do with the gambling and casino industry. Well, the auction had nothing to do with their brand but it caught the attention of the globe which in turn made the casino site known. And guess what? It worked for GoldenPalace.com.

Tattooing of a Casino URL

Can you imagine having a tattoo of a casino website on your hand or back? Sounds weird. But surprisingly enough, GoldenPalace had to go a step further and showcase their zeal by tattooing the casino URL on the backs of the famous boxers.

That means whoever came to watch the game or just watching it through their television had to see the GoldenPalace URL. In 2004, the tactic was working pretty well on the back of Janet Jackson. Surprisingly enough, the site experienced a 380% (!) traffic increase in their site.

One of the online casino sites that have been known for auctioning some bizarre junk on the internet is the GoldenPalace.com. Besides the auction the Virgin Mary cheese they went ahead and purchased a dinner plate from the Titanic for $10,000, the outsized lemon for $29.99, toy army for $1,350, and frosted flake for $156 among others.

All these auctions and purchases were to lure the attention of the world to their site which indeed worked. Although some auctions had controversies despite the casino site’s willingness to pay for the money.

If you think the above tactics were so weird, wait and see the next oddest promotion and marketing strategies that have been used by some online casinos.

Winning a Trip to Space

Online casinos have tried to attract customers to their site but InterCasino went overboard to make their players fantasize about having a trip outside the earth. This online casino site was tired of giving the normal free spins and other offers and decided to go to space.

So in 2010, this site decides to give sparkle and a treat on any player that will get the most number of stars and be on the top of their leaderboard. By May 30th, 2010, there was a winner, player 66kgb666 was the top in their leaderboard.

Well, he received a reward of $50,000 but oddly enough, we are still waiting for his takeoff to space. Was it a prank or did they forget that the winner received a trip to space? Well, it is not clear what InterCasino is planning concerning the trip.

This perhaps could be the craziest and oddest promotion and marketing tactic that an online casino site has ever used. The casino that had this promo was Swank Poker. Instead of getting money and other offers that casinos offer, this online casino decided to give the players sex among other adult services.

Despite these crazy offers and even being featured in magazines, you will be surprised to know that players never turned up. There was extremely low traffic on their site which made the site run down and folded down completely. It is not clear whether any player won these offers.

Now hang on and read another weird offer after playing Bombshell Poker; you get a date with any of their models. Although this one is a bit moderate compared to the offer of Swank Poker.

So with Bombshell Poker, you were to play online as usual in their site. After playing, you were given the privilege to talk with one of the Bombshell models and if you could be lucky enough, you would have a date with them.

Well, although the offer was mind-boggling and emotion rising, it never gave any player a chance to date these models. The reason being, Bombshell Poker shut down before rewarding any gambler. Currently, it is just a blank site with nothing.

Winning a BMW Every Day

Come on! Who would not want to drive a brand new BMW? Can you imagine this was the haze in most gamblers and of course, they flocked into the online casino site to try their luck? Who knows, you could be that one lucky winner of this machine.

But if the deal is too good, you have to think twice. This promotion looked so good to be true and sure it was not true. It is one of the most deceptive promotions and marketing tactics that has ever been used in any online casino

This promo by the StarPartner Casino Group which involved Crazy Vegas Online Casino, Maple Casino, and Golden Riviera. All the three casinos publicized that you could win a brand new BMW. Unfortunately, they meant a BMW toy car. This angered a lot of players because they had already deposited their money. Now that’s just plain wrong.

To wrap up our list of the oddest online casino promotions and marketing tactics is the one from Reality TV Poker Tournament. Imagine for a moment winning a fully furnished mansion with a swimming pool. Of course, this is the dream of everyone. And yes, it was one of the dreams of many gamblers.

After Dominic Marrocco bought Tyson’s mansion in Las Vegas, this millionaire decided not to stay in the mansion. So he devised a kind of reality television show where many pokers and gamblers would gather and play. Only the top two players would be left for the final of this Poker Tournament.

The two players were to be on the table with Dom and Tyson. Well, the progress of this great tournament went silent, and we are still waiting for the two players to play the two millionaires and take the mansion. The waiting seems not to come to an end any time soon.

Of course, there could be other weird promotional and marketing strategies that online casinos have used to lure players into their sites, but the above are some of the most bizarre tactics. What other weird online casino promos have you heard?