It shouldn’t come as a surprise to anyone that beauty contestants often get some plastic surgery done. And why wouldn’t they — it’s not like the Miss Universe contest, for example, prohibits nips and tucks.

An incident in Saudi Arabia, however, shows that rules for animal beauty contests are much stricter. The country’s authorities have cracked down on artificially touched-up camels.

The organizers of the King Abdulaziz Camel Festival banned more than 40 camels for plastic surgery. Their owners had gone to extreme lengths to make their animals prettier.

The authorities found multiple cases where the owners had stretched out the camels’ lips and noses using Botox injections, rubber bands, and subdermal fillers. In addition, some owners had given the camels hormones to boost their musculature.

“The club is keen to halt all acts of tampering and deception in the beautification of camels,” the authorities said according to the Associated Press. 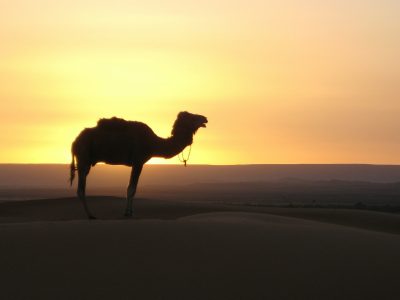 But why would someone resort to cosmetic surgery and Botox for a camel contest? The answer, of course, is money — and lots of it.

The King Abdulaziz Camel Festival, which started on December 1, has a prize pool of $66 million. The enormous sum of money is divided between winning camel owners who compete in 19 categories, with separate classes for all six primary colors in camels.

It’s not just Saudi camel owners who compete, either. Camel breeding is a multimillion-dollar global industry, and the contest draws in camels from multiple other Gulf countries, in addition to the U.S., Russia, and France.

The organizers estimate that nearly 33,000 camels will be involved in the event in one way or another. At least that means that the vast majority of the contestants didn’t try to cheat their way to victory.

In addition to being surgery-free, the competing camels must be registered with the Saudi Ministry of Environment, Water and Agriculture.

The King Abdulaziz Camel Festival is more than just a beauty contest, though. Over 40 days, many other events take place as well.

On top of the beauty contest, the festival will feature camel races, a camel market, a camel parade, and other forms of entertainment. The organizers expect more than 100,000 daily visitors at the event, which creates around 5,000 jobs annually.

This year’s festival takes place on a 7,900-acre plot some 62 miles northeast from the Saudi capital of Riyadh. The purpose of the event is to highlight and preserve the camel’s signification role in Saudi Arabia’s Bedouin tradition and heritage.

This isn’t the first time the festival organizers have busted camel breeders for altering their animals’ looks. A similar episode played out in 2018.

At that time, a total of 12 camels got kicked out for having plastic surgery done on them. In the most egregious case, authorities caught a veterinarian red-handed injecting Botox into a camel’s lips.

The veterinarian had also reduced the size of some camels’ ears. In the beauty contest, delicate ears are a winning feature.

Other important criteria are the shapes of the camel’s head, face, and neck. As such, it’s easy to see how unscrupulous owners might resort to plastic surgery.

“[Botox] makes the head more inflated, so when the camel comes, it’s like: ‘Oh, look at how big that head is. It has big lips, a big nose,’” Ali al-Mazrouei, a son of a camel breeder from the United Arab Emirates, told The National.

Ali Obaid, a camel owner and a guide at the beauty pageant, said cheaters are getting more and more creative each year.

“For example, they start to pull the lips of the camel, they pull it by hand like this every day to make it longer. Secondly, they use hormones to make it more muscular and Botox makes the head bigger and bigger. Everyone wants to be a winner,” he said.

Other methods of cheating include darkening the animal’s fur with oil.

Some owners who tamper with their camels aren’t even looking to win the beauty contest. They just want to artificially inflate the camels’ value.

“The people who are just in the camel competition to make it more valuable, they are cheating everyone. A fine should be applied,” said Al-Mazrouei.

In camel racing, whoever is using drugs is fined about $13,500 in Abu Dhabi. The fine is not yet applied for beauty camels,” he added.

There are some safeguards against cheating, however. The competing camels undergo a blood test and get their age measured by their teeth.

In addition, each camel must spend the night before the competition in their judging pens. Muslim owners must also swear on the Quran that they have not resorted to cheating.

Woe unto those who break their sacred oath.