The sun comes up during the day, and the moon – in one of its varying phases – replaces it at night. That’s just how things are and nothing will change that.

Or so you might think. But around a thousand years ago, something quite unusual happened.

There was no moon. Or if it was visible, it was dim and dark, a far cry from the usual shining light of the night sky.

We know this because records from people who witnessed it firsthand have been preserved to this day. For example, in May 1110, one English observer wrote:

“On the fifth night in the month of May appeared the Moon shining bright in the evening, and afterwards by little and little its light diminished, so that, as soon as night came, it was so completely extinguished withal, that neither light, nor orb, nor anything at all of it was seen.”

What particularly mystified the ancient scholar was the fact that apart from the moon, the sky on that particular night was otherwise perfectly normal.

“All the night was the firmament very clear, and the stars over all the heavens shining very bright,” he noted.

But wouldn’t this just be a regular lunar eclipse? It doesn’t seem so, as records – and modern science – show that during an eclipse, the light reflected by the moon is still somewhat visible.

In a nutshell, the moon just suddenly disappeared. It clearly came back afterwards, but the phenomenon has puzzled scholars and scientist throughout the ages. 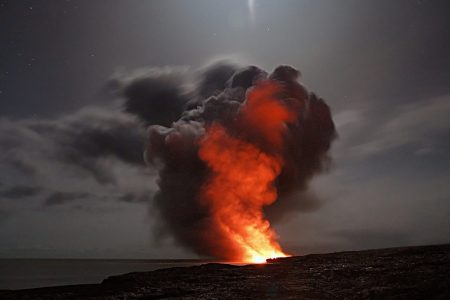 So far, there has been one generally accepted explanation for the moon suddenly going on vacation. According to scientists, the explanation was found in an Icelandic volcanic eruption.

In southern Iceland sits the volcano Hekla, also known by the lovely nickname of Gateway to Hell. In 1104, Hekla decided to live up to its name and erupted.

From the gates of hell spewed forth fire and brimstone, together with an enormous cloud of sulphuric gases. According to this theory, the sulphuric particles belched out by the mountain traveled up into the stratosphere.

Eventually, they floated back down to Earth, but not without darkening the skies for months, or even years. Scientists have dated ice cores – samples of glacial ice containing these sulphur particles – from Greenland and determined that their age correlated with the eruption of Hekla.

And thus, the mystery is solved. The moon disappeared because a cloud of volcanic material obscured it.

Or that’s what they thought. Recently, this theory has been debunked.

New research has shown that dating of the analyzed ice cores was off by seven years for the first millennium CE, and by up to four years after the year 1100.

“A prominent discovery arising from this revised ice-core dating is a major and hitherto unrecognized bipolar volcanic signal with sulfate deposition starting in late 1108 or early 1109 CE and persisting until early 1113 CE in the Greenland record,” the researchers say.

There’s a lot of incomprehensible scientific detail that goes into the ice core dating. But the bottom line is this — Hekla’s eruption could not have been the cause of the vanishing moon. The years just don’t line up.

So if Hekla didn’t hide the moon for sight, what caused it? An alien mothership hovering between the Earth and the moon.

Well, no, it’s nothing quite so wild. According to researchers, the most likely cause is still a volcanic eruption.

They say that, although they haven’t found any records of other atmospheric phenomena associated with volcanoes going boom.

“We note that no other evidence of volcanic dust veil, such as a dimming of the sun, red twilight glows and/or reddish solar haloes, could be found during our investigations for the years 1108–1110 CE,” they say.

Despite the lack of historical record, the sulphur deposits in the ice and all other evidence point at a volcano. But which volcano was it?

New research hints that we might have to travel East halfway across the world to find a culprit. While they can probably never be sure, scientist now believe Mount Asama, a volcano in Central Japan, belched forth the moon-obscuring cloud.

“There was a fire at the top of the volcano, a thick layer of ash in the governor’s garden, everywhere the fields and the rice fields are rendered unfit for cultivation. We never saw that in the country. It is a very strange and rare thing,” a Japanese statesman wrote in his diary at the time.

Other research methods, such as tree ring verification and further historic documentation, show that from 1109 to 1110, Japan faced a difficult time. The air grew cold and crops failed – all signs that point to a volcanic cloud blogging sunlight.

History also shows that starting 1109, crops started failing in Western Europe as well. The situation got so bad that a famine broke out.

Putting this all together indicates that a massive volcanic eruption – perhaps that in Japan – caused wild fluctuation in the climate. This eruption was also most likely behind the moon that vanished from England’s skies.

It seems everybody just forgot it ever happened and we’re just now finding out about it again.