It sounds like something that could’ve sprung from a cheesy Hollywood action comedy, like Kung Pow! Enter the Fist. But we assure you, Iron Crotch Kung Fu is a real and terrifying martial art.

There are many “iron” disciplines within the larger martial art of Kung Fu. There’s Iron Fist, Iron Head, Iron Throat, and many more. What they all have in common is that they train their namesake body part to withstand tremendous impacts and possess a truly awesome power. Keep in mind, though, this is not the first martial art a beginner should start with.

Practitioners of these arts are capable of seemingly inhuman feats of strength. They can punch through steel plates and crush piles of bricks to dust with nothing but their forehead.

Guess, then, which part of the body disciples of the Iron Crotch train? Well, suppose you don’t have to guess.

These martial art masters have honed their… Intimate areas into impenetrable bulwarks of might. And nowhere is that more apparent than in their most infamous exercise.

It involves a nearly seven-foot-long log weighing almost 90 pounds, and capped with a steel plate. The exercise involves lifting that log up into the air on a kind of a pulley and letting it smash down into your groin.

Did you wince? If you didn’t, you might be able to help the masters of the Iron Crotch with their dilemma.

The practice of Iron Crotch is suffering from a lack of willing new students. If something isn’t done, the martial arts discipline is in danger of disappearing completely. 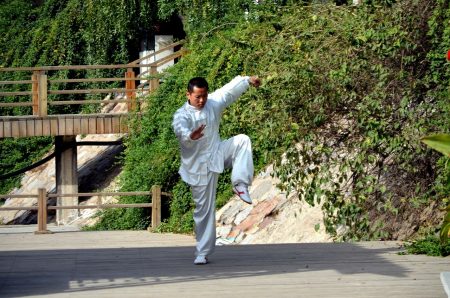 You might still think that this all has to be a joke. Who in their right mind would voluntarily get smashed in the ‘nads over and over again? How is that even possible?

But as outlandish it might seem, Iron Crotch is a thoroughly real martial art that has been practiced for hundreds of years. It is one branch of the larger Tongbeiquan Kung Fu tradition, which emphasizes engaging your opponents at the maximum distance.

Iron Crotch truly seems to render its practitioners immune to penile damage. Just watch this Twitter video from Global Times, which shows a man repeatedly hitting himself in the crotch with a brick, in addition to the aforementioned log exercise.

Wang Liutai is a 65-year-old master of the Iron Crotch discipline. The appropriately named head of the Juntun Martial Arts Academy has been practicing Iron Crotch for 50 years.

Wang has a wife and two children, in case you were wondering if his calling has impaired his reproductive health.

“When you practice Iron Crotch Kung Fu, as long as you push yourself, you will feel great afterwards,” Wang told Reuters.

Wang explained that the Iron Crotch practice consists of two parts. In addition to strengthening the bones and muscles of the groin, the Iron Crotch-ists use Qigong breathing techniques to focus their minds and bodies.

“If practicing [Iron Crotch] damaged this part of the body permanently, then over time no one would do it. With this, the more you practice, the stronger you become. Without such practice, who would dare practice Iron Crotch Kung Fu?”

He raises a good point. Clearly the techniques work.

But despite their attested safety – and even possible beneficial effects on male virility – the art of the Iron Crotch is close to extinction. The flow of new disciples has slowed to a mere trickle.

According to Wang’s fellow Iron Crotch Master Tang Xiaocheng, there were once 200 students training at the academy in Juntun, with 80 embracing the Iron Crotch. These days, they’re lucky to have more than 20 disciples, out of whom a mere five train their groins.

It might partially be because for generations, the Iron Crotch remained a closely held secret, reports Reuters. But we’re ready to bet that a big part of it is also the fact that you get hit in the dong over and over again.

In order for their discipline to survive, Wang and Tang have broken the ancient tradition of secrecy. They are now actively promoting Iron Crotch together with other masters from all over the world.

A large part of this promotion includes staging public stunts and demonstrations. And these aren’t just any kind of stunts.

According to Kung Fu Magazine, three Taiwanese Iron Crotch students demonstrated their penile strength by dragging a truck with 100 passengers aboard over the distance of three feet. That might not seem much, but they did it using nothing but their… Wangs.

Other stunts include getting hit and kicked in the sacks without the students showing any reaction. Other times, they have lifted hundreds of pounds with their male equipment.

A Dream of Preserving the Tradition

Luckily, the efforts of the penile martial artists have borne some fruit. Wang says that several new students have enrolled to learn the secrets of the Iron Crotch across China.

But like so many others, the Iron Crotch masters have had to embrace modernity and digital technology. Most of the students now learn through social media, prerecorded videos, and video conferences.

Still, beggars can’t be choosers. Wang and Tang are happy for each and every new student willing to unlock the true strength of his penis.

Their goal, after all, is not to become the biggest new fitness fad. They only want to ensure that the ancient traditions of the Iron Crotch are not forgotten.

“If there are more students to carry it forward and spread it to the whole country and the world, if they can carry this form of Kung Fu forward, then my dream will come true,” Wang said.