After two (or is it three) long years of the pandemic, traveling to places is finally back on the menu. Enthusiastic globetrotters are packing to airports to go visit friends and relatives or to just see something else than the same four walls.

But if you’re one of those hopeful travelers, here’s a pro-tip for you. Don’t check your bag. Seriously — there’s a high chance you’ll lose it.

Airlines and airports around the world are losing record numbers of bags. In some places, one out of every 10 bags goes missing.

“A significant number of people will not be reunited with their baggage — very likely more than at any time in history. The industry faces more challenges than in any of my 25 years in the sector,” Marc Casto, a travel agency executive at Flight Centre Travel Group, told The Guardian.

Not only do travelers not get their bags on time, but a lot of the time they simply vanish. Plenty of baggage seems to disappear off the face of the earth — possibly lost in endless piles of bags and suitcases that are spilling into airport corridors. 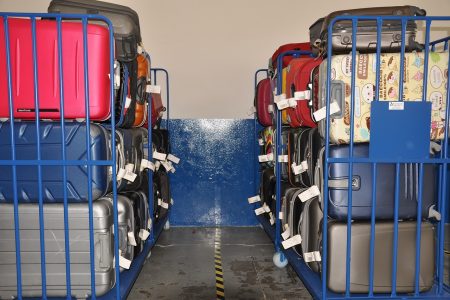 It’s bad enough to be stuck in a foreign country without your bag. But sometimes you had something valuable or precious in your bag that’s now potentially gone forever.

Deborah Sergeant was traveling from Mexico City to Lima, Peru, in February. But when she arrived, she learned that Copa Airlines had lost her bag.

“I waited three hours at the baggage carousel until the early hours of the morning for a member of airline staff to finally arrive and tell me that there was not even a record of my bag on the system,” said Sergeant.

Sergeant said she was traveling practically with her “whole life.” Thanks to the lost clothes and other items, she’s now down $1,500 that the airline refuses to compensate her for.

But YouTuber Connor Colquhoun took an even bigger financial hit. On a flight from Heathrow to Los Angeles in June, he lost two suitcases containing $50,000 worth of filming gear.

“Once we landed they wouldn’t tell us anything. We have tried to contact the airline multiple times nearly every single day and we haven’t heard anything. It’s impossible to talk to a real human being,” he said.

Some things are more valuable than money, though. American Donna O’Connor traveled to Ireland at the end of June to spread her late parents’ ashes on a family farm.

And then Air Canada lost the bag containing the ashes.

Luckily, this bag has been found. The problem is that Air Canada shipped it back to O’Connor’s home in Illinois — while she’s stuck in Dublin.

So, what on earth is going on at the airports? Why are they losing all these bags?

Well, the answer depends on who you ask. The airlines are, of course, pointing their fingers at the airports.

For example, the Emirates airline recently called London’s Heathrow airport “incompetent.” The airline is blaming the airport for not having enough people to handle baggage.

Naturally, the airports are firing back at the airlines. Heathrow accused airlines of not hiring enough ground staff to look after passengers, putting profits above caring for travelers.

In reality, airlines and airports probably share the blame. Both cut tens of thousands of people early on during the pandemic as people became unable to travel.

But now that people are starting to travel again, neither airlines nor airports have been willing to hire the same number of workers. After all, you have to pay them and that would cut into the profits that are finally coming in again.

As a result, what few baggage handlers they have are seriously overworked. Faced with mounting workloads and low pay, the workers do what they usually do in such a situation — they go on strike.

The numbers of lost bags are absolutely staggering. Claims for lost baggage are up 30% compared to pre-pandemic numbers.

Globally, eight in 1,000 bags will currently get lost during travel. But in some places, it’s much, much worse — Qantas Airlines in Australia is losing every tenth bag at the moment.

It’s no wonder the bags are getting lost, though. At Heathrow, with way too few people to handle bags, the airport has started simply dumping arrived bags in the corridors and claim areas.

Good luck finding your own suitcase in a room filled with possibly hundreds of others.

Some airlines have gotten creative in reuniting travelers with their bags. American Delta Airlines recently flew a plane loaded with nothing but 1,000 lost bags from the UK to Detroit.

If you’re lucky enough to get your bag, don’t expect it to be intact. Travelers around the world are reporting that when they finally get their possessions after several weeks, the bags are battered and broken.

So, what do travel experts suggest in this situation?

“I sincerely advise all travelers to avoid checking baggage if possible,” recommended Casto.