The Lincolns left Indiana in March of 1830 when the future president was 21 years old. They headed west for the 225-mile trip to their new farmstead near present-day Decatur, Illinois, where Abraham and his father built a new log cabin and a barn and Abraham split wooden rails to fence their land. In the summer of that year Lincoln made a political speech – likely his first such speech – when he stepped forward to reply to statements that had been made shortly before by two candidates for the county legislature. Lincoln cogently responded to each of the candidates’ arguments, leavening his remarks with humor that delighted the crowd.

A businessman named Denton Offutt hired Lincoln to pilot a raft and its agricultural cargo down the Mississippi River to New Orleans. The trip went smoothly, and the goods and the raft were sold, with Lincoln returning north by riverboat. Offutt was impressed by Lincoln’s maturity and effort, and he offered Lincoln a job as a clerk in a grocery store Offutt planned to open in New Salem, a new town being settled on the Sangamon River in Illinois. Towns were popping up along several rivers in Illinois because water travel was much easier than travel over the rough and rudimentary roads that turned to mud whenever it rained. Lincoln accepted the clerk position, and he spent the next six years of his life in New Salem, never returning to farming as a vocation.

Offutt liked his new clerk, and Lincoln enjoyed New Salem. Offutt’s store was stocked with seeds, tools, saddles, guns, and foodstuffs such as sugar, coffee, salt, eggs, and vegetables. Barrels of liquor could also be purchased in the store. Lincoln earned $15 a month as a clerk. He was permitted to sleep in the back of the store, and he would take his meals with nearby families. He voted for the first time in 1831 by stating out loud to the town’s election officials his preferences for the United States Congress and for local political offices. There was no secret ballot at the time.

Offutt also enjoyed boasting that Lincoln’s athletic skills, including Lincoln’s wrestling prowess, were better than those of anyone else in the county. A local tough named Jack Armstrong, the leader of a gang known as the Clary’s Grove Boys, was the champion wrestler in the area, and few men were willing to wrestle him. Offutt claimed that his new clerk, Abe Lincoln, would be up to the task of wrestling Armstrong. Lincoln had done some wrestling while growing up in Indiana. His long arms and legs had often given him an advantage over his opponents. Neither Armstrong nor Lincoln had any personal animus against the other, but at Offutt’s urging Lincoln challenged Armstrong to a match.

Lincoln and Armstrong wrestled one another in the fall of 1831. Armstrong was five years older than Lincoln, but he was also ten inches shorter than the future president. Armstrong was also known for setting wily traps for his wrestling opponents. The two locked limbs for quite some time as each tried to gain the advantage, but eventually Armstrong released his hold on Lincoln, who could then have claimed to have won the match. Instead, Lincoln shook hands with Armstrong and agreed to a draw.  Lincoln’s act of sportsmanship won him something more that day. He proved to himself that he had the strength and courage to succeed on the Illinois frontier, and his generous offer to Armstrong of a draw won him a new friend and the respect of the local community. 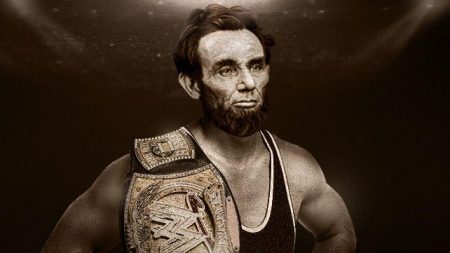 In 1832, at the age of 23, Lincoln made his first foray into politics. His friends encouraged him to run for the Illinois state legislature. Four candidates would be chosen throughout Sangamon County for the lower house of the state legislature. In his campaign statements, Lincoln emphasized the need for more internal improvements – for example, the improvement of roads and the increased use of rivers for transportation and commerce. In one campaign statement he noted that “[e]very man is said to have his peculiar ambition. Whether it be true or not, I can say for one that I have no other so great as that of being truly esteemed of my fellow men, by rendering myself worthy of their esteem. How far I shall succeed in gratifying this ambition, is yet to be developed.” Lincoln was open about his ambition, but he also realized that he had to earn the respect and admiration of others. Lincoln lost the election, coming in eighth among a field of thirteen candidates, but he was not too disheartened by his first foray into elective politics.

Having left family and farming behind when he took up residence in New Salem, Lincoln devoted more time to his self-education. He joined a debating society that met twice a month, where many of the important issues of the day were argued – e.g., whether slavery should be illegal, whether society has a duty to care for the poor, and whether public funds should be used for the construction of transportation projects. Lincoln was initially nervous in his presentations, but his enthusiasm and honesty were evident. All the while Lincoln continued his ongoing efforts at self-education, especially improvement of his English grammar. He would borrow books from local residents, sometimes walking many miles to ask for the loan of a book, which he then devoured, committing whole sections to memory. Each exposure to grammar texts helped Lincoln in his constant drive to improve his spoken and written words. As he became more confident with his speaking and writing, Lincoln became more selective and discerning about what he had read and heard. One of his New Salem friends commented: “His mind was full of terrible Enquiry – and was skeptical in a good sense.”

Denton Offutt’s grocery store failed during the spring of 1832, and Lincoln found himself out of work. He purchased a half partnership in another local grocery store, and he and another New Salem resident, William Berry, also a half partner, put all of their assets into their store in an attempt to compete with the most successful store in town. From the beginning, however, they were dogged with problems, some of their own making. Berry enjoyed whiskey, and he drank plenty of it from the store’s supply. Lincoln did not drink, but for his part he spent large amounts of time talking politics with the store’s customers when he should have been attending to the store’s finances. The store began to fail, relations between the two partners became increasingly strained, and nine months after the store opened Lincoln sold his half-partnership to Berry. Years later Lincoln would say of the joint venture that the “store winked out.”

In May of 1833 Lincoln received a presidential appointment, by President Andrew Jackson, as the postmaster of New Salem. Incoming mail from outside New Salem would arrive by “post riders.” This was before the use of envelopes and stamps. Letters were folded and sealed with wax, and postage was determined by the number of pages in the letter and by how far it had traveled. Lincoln would note the postage due in the upper right-hand corner, and the recipient – not the sender – of the letter paid the postage due.  The job paid about twenty-five to thirty dollars a year, but it had benefits that went beyond salary. The appointment made Lincoln a federal employee, and it increased his status in the New Salem community. Lincoln would usually make the postal deliveries himself, allowing him to get to know more of the people in New Salem and the countryside. In addition, the position was part-time, permitting Lincoln to augment his income with other work. Lincoln’s habit was to carry the mail in his hat as he made deliveries. (The habit carried over to Lincoln’s years in the presidency, when he sometimes carried important papers in his stovepipe hat.) The job also provided Lincoln with another benefit he took advantage of: he got to read the many different newspapers that were coming through the mail to New Salem.

Later in 1833 Lincoln found part-time employment as a surveyor, even though he knew little about the mechanics of the profession. He recalled years later that he “procured a compass and chain,” studied “Flint, and Gibson a little” (two surveying textbooks), and “went at it.” He learned how to set out the dimensions for roads and planned towns. The increasing migration of settlers to New Salem and nearby areas provided many opportunities for plying surveying as a trade. Over time, surveying became more economically attractive to Lincoln than his postmaster duties. As he put it, surveying “procured bread, and kept soul and body together.”

In 1834 Lincoln decided again to run for the Illinois legislature. Thirteen men were competing for the four positions available for Sangamon County in the state’s Ninth General Assembly. Since his elective office loss in 1832, Lincoln’s network of friends and supporters had increased significantly. His positions as storekeeper, postmaster, and surveyor had widened his sphere of personal acquaintances in the county. Another politician commented that “[e]veryone knew him, and he knew everyone.” His political skills had matured since the earlier loss, and his oratorical ability had also developed significantly. Lincoln styled his campaign to appeal to both the Democrats and the Whigs, the two competing parties. When the election concluded, Lincoln had finished second among the thirteen candidates. He trailed the candidate who finished first by just fourteen votes.