As a Wisconsin girl that has never been to Australia, I have never seen or been around koala bears, with the exception of the zoo. Koalas are cute and can only live in one place in the entire world, and that’s just a small part of what makes them so fascinating.

Currently, there are only 2,000 to 8,000 koalas in the wild. They are not considered endangered but the Australian koala population had dropped by 90% in less than ten years. The drop is due to destruction of the koalas natural habitat, the narrow crescent on the eastern coast of Australia.

In captivity, koalas show more lesbian tendencies than straight ones. Sexual encounters between koalas have involved up to five females and the incidences last twice as long as the heterosexual encounters.

Koalas only stay awake for 4 hours out of the day. They have tiny brains that 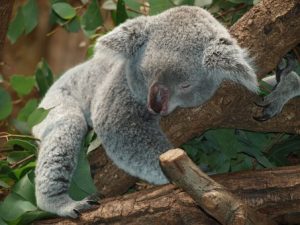 use a lot of energy and their diet of leaves doesn’t give them much extra energy for their days. They sleep for about 19 hours a day.

Koalas are called koala bears because they look like teddy bears.

Koalas have fingerprints that are nearly indistinguishable from human ones. One could easily be mistaken for another in a criminal investigation.

When koalas are born, they are still in the embryonic stage. They weigh only .5 grams when they are born and are only about 2 centimeters long. They are born blind and live in their mother’s pouch for 5 months. 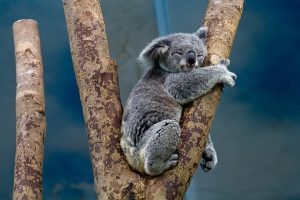 animals move further down the tree and press themselves against the trunks to wedge themselves as close as they can to the coolest spots.

Koalas are not bears, though many people think they are. In fact, they aren’t even related to bears. Even with the descriptive name ‘bear,’ the truth is koalas are Marsupial mammals. They are related to the kangaroo and wombat.

A high percentage of female koalas have chlamydia. 50%-90% of them, to be specific. Symptoms cause the koalas to have chest infections, conjunctivitis, and “wet-bottom.” This can be fatal for the koalas and cause sterility. They need antibiotics to treat them.

The koala is nicknamed native bear.

The word koala means ‘no drink’ or ‘no water’ in the native Aboriginal language. Aboriginal names for the koala are Kaola, Koalo, Koolewang, Koobor, Colah, Coola and Cullawine.

Koalas live for 12-16 years depending on if they are living in the wild or in captivity.

Koalas may look like comfy and cuddly teddy bears, but they have sharp teeth 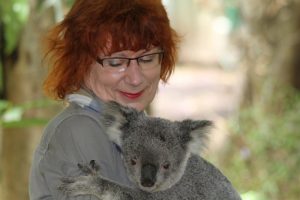 Koalas have extra thick fur that helps protect them from the environment. Their hair is especially thick on their neck and shoulders.

Koalas breed in the summer. Male koalas claim their territory by bellowing and grasping at the base of trees, while rubbing their chest against it. This marks the tree with the koalas scent. Females bellow during this time as well but they are not territorial.

Koalas can only live in one place in the world, Australia.

Koalas eat about 2.5 pounds of food a day, consisting entirely of Eucalyptus leaves. They eat so many of the leaves that they smell like them.