It's worth noting that roller coaster rankings vary. Parks continually try to outdo one another with the tallest, fastest, longest or steepest coasters. In other words, while these may be record-holders right now, they won't be for long.

1The Tallest Roller Coaster (Which Also Has the Biggest Drop) 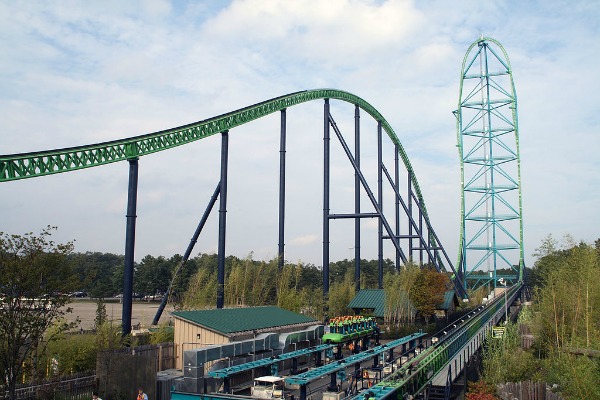 Jackson, New Jersey's Six Flags Great Adventure has quite an impressive coaster—the Kingda Ka ride is the tallest in the world, climbing to 456 feet, and also offers the largest drop, at 418 feet. If that's not enough, it's also the second fastest coaster in the world, and the fastest in the U.S., clocking in at 128 miles per hour.

It's not as easy to make wood coasters as tall as those made of steel, but there are still some impressive ones out there. The Colossos at Heide Park (in Soltau, Lower Saxony, Germany) is 197 feet tall and one of only four in the world prefabricated with lasers to achieve a higher degree of precision, which improved the strength of the coaster so it could break the height record. 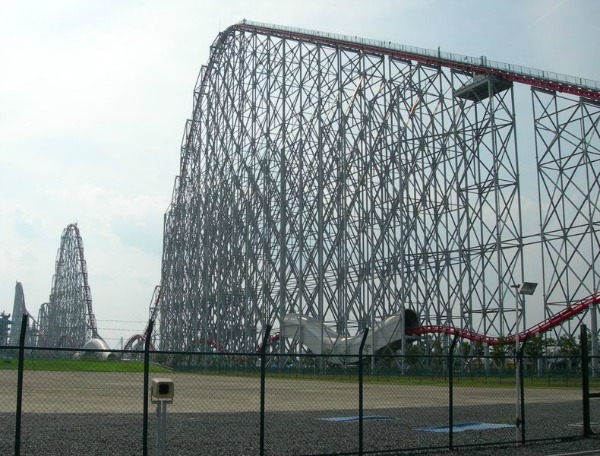 When Steel Dragon 2000 opened at Japan's Nagashima Spa Land, the park immediately gained records for having both tallest and longest coaster. Only three years later, it lost its tallest title, which now belongs to the Kingda Ka in New Jersey. Even so, it still holds the title for the longest roller coaster, stretching 8,133 feet in length. It is also the sixth fastest coaster in the world. 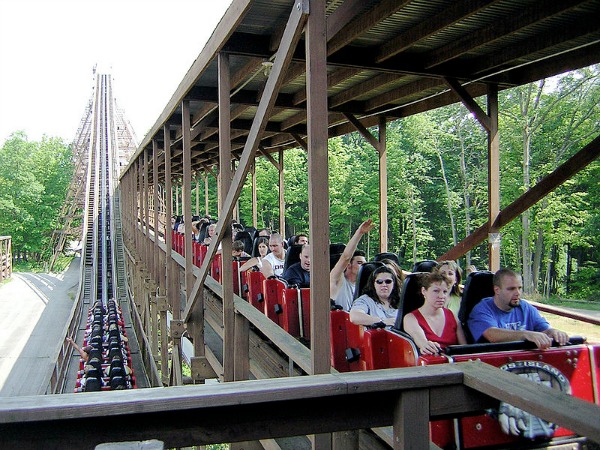 Cincinnati's Kings Island Beast stretches 7,359 feet long, making it the world's longest wooden roller coaster. It's held the title since it was constructed in 1979 and gives riders over four minutes of enjoyment, which is pretty lengthy for a roller coaster of any type.

5The Fastest Coaster on Earth 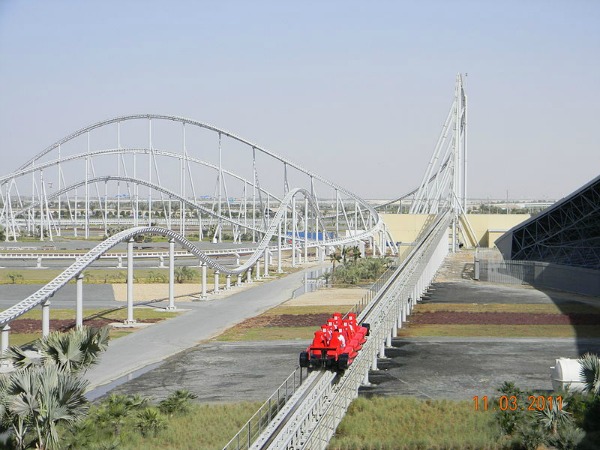 Dubai's Ferrari World Abu Dhabi lives up to its fast and furious reputation, with the Formula Rossa coaster topping out at an impressive 150 miles per hour. That impressive speed is reached through the use of a hydraulic launch system that goes from zero to 60 in only 2 seconds, with 150 mph hit in just 5 seconds— 1.7 g's of force build up to 4.8 throughout the duration of the ride. 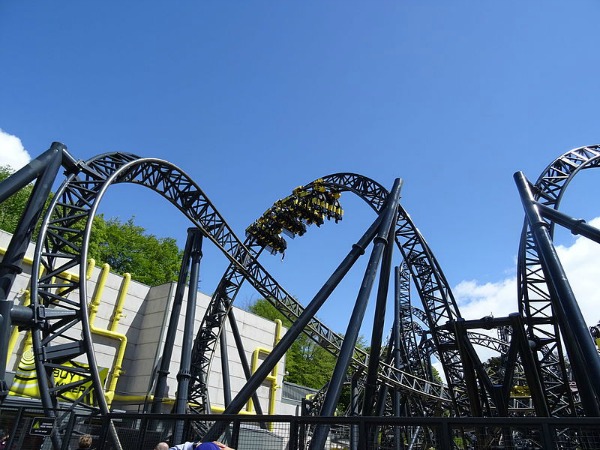 The Smiler at Alton Towers in Staffordshire, England holds the record for the most inversions, flipping riders upside down an impressive 14 times with loops, corkscrews, and rolls of all kinds.

Unfortunately, a dangerous collision occurred on the ride in June 2015, leaving five riders injured and the Smiler closed for the rest of the season. It opened with new safety precautions in 2016—so far the changes have kept riders safe. 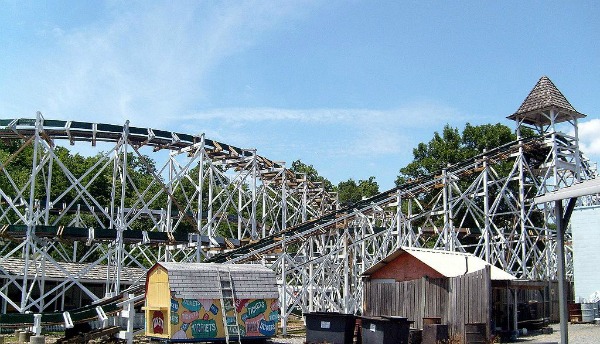 The oldest coaster still in use is the Leap-The-Dips in Lakemont Park in Altoona, Pennsylvania. The ride has been around since 1902. It was almost torn down in 1985 but got a last minute reprieve and was renovated and reopened in 1999. 115 years later, the ride is one of last two side-friction wooden coasters in the world and the last of its kind in North America. 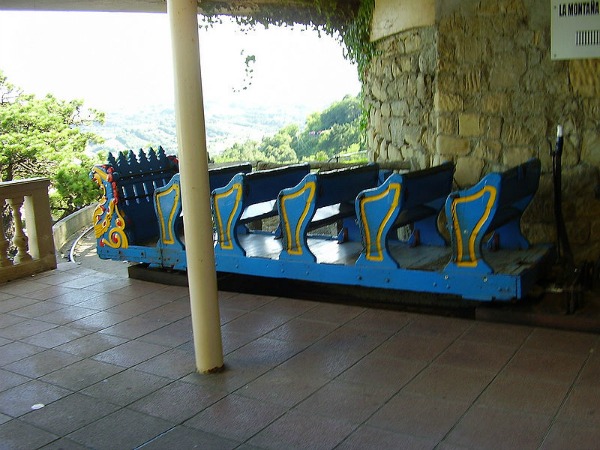 The oldest steel roller coaster still in operation is the Montana Suiza (Swiss Mountain) at the Parque de Atracciones Monte Igueldo in Spain. The coaster was opened in 1928, and it has remained in operation ever since.

9The Coaster With the Steepest Drop 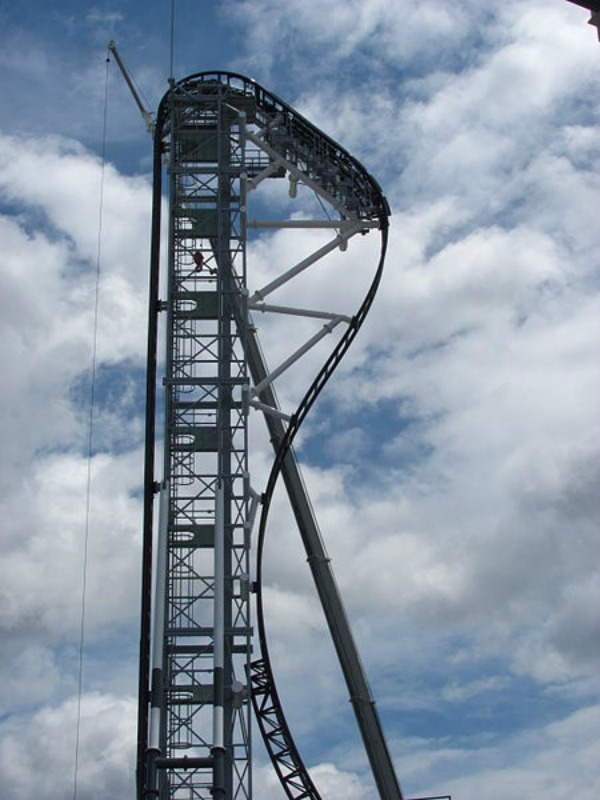 With a drop of 121 degrees, Japan's Takabisha at Fuji-Q Highland holds the record for the steepest drop in the world. Aside from the epic 141-foot drop, the ride also has seven inversions, reaches a top speed of 62 mph and hits riders with a whopping 4 g's of force.

As the name implies, a drop tower coaster takes riders to the top of a tall tower and then releases them into free fall. The tallest is the Zumanjaro: Drop of Doom at Six Flags Great Adventure in New Jersey. The ride lifts passengers 415 feet in the air and releases them to travel down at a top speed of 90 mph.

11The Coaster Designed to Kill Its Riders 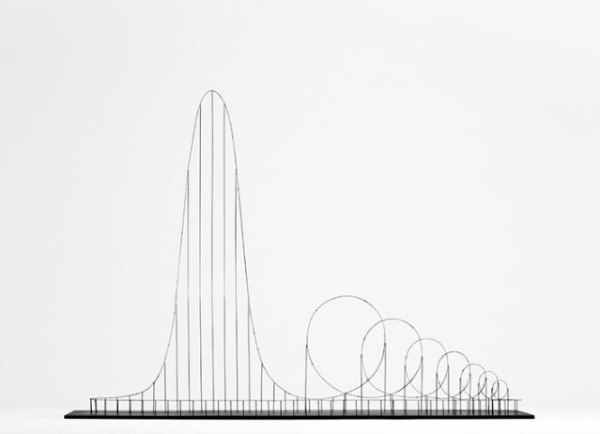 The Euthanasia Coaster is not a real ride, but the concept is still fascinating. It was designed by Ph.D. candidate Julijonas Urbonas in 2010. Urbonas believes that the euphoria from riding a roller coaster would be ideal for those ready to pass into the great beyond, whether for assisted suicides or legal executions. His design incorporates seven loops that build the speed up to a lethal ten g's. That level of force would kill riders by cutting off oxygen to the brain. Fun!