In January 2017, a dossier was released by Buzzfeed claiming the Russian government has been “cultivating, supporting and assisting” president-elect Donald Trump “for at least five years." Among the more salacious details of the 32 page document is “compromising” information that Trump engaged prostitutes in a hotel room monitored by Russian intelligence services. He allegedly had them urinate on each other in the presidential suite of the Moscow Ritz Carlton, in an act commonly referred to as "watersports" or "golden showers." (Both of which are currently trending on Twitter.)

BuzzFeed News stressed that the allegations are unverified and potentially unverifiable," and both Trump and the Russians claim the dossier is a fake. But the Internet does it what it does best, and many on social media channeled their inner 12-year-old.

Revenge is a dish best served—warm?

A transition of power no one ever saw coming.

A perfect example of "truthiness."

This was going on all over the world when the news broke.

"Live from The Situation Room..."

Part of the trilogy which also includes Goldeneye and Goldfinger.

And likely not one Julian Assange ever intended. 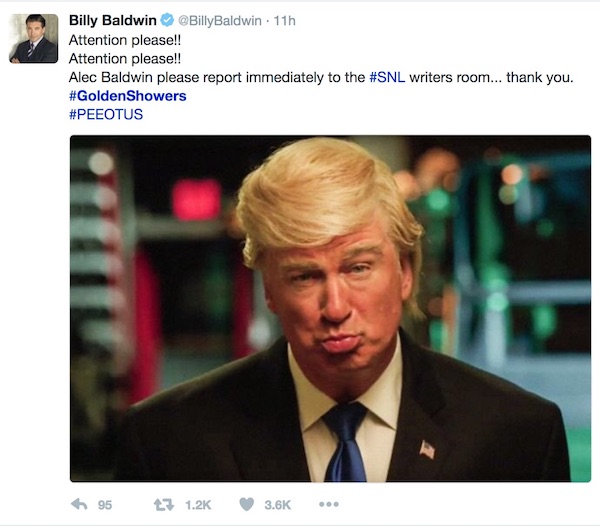 Saturday Night Live should be interesting this week!