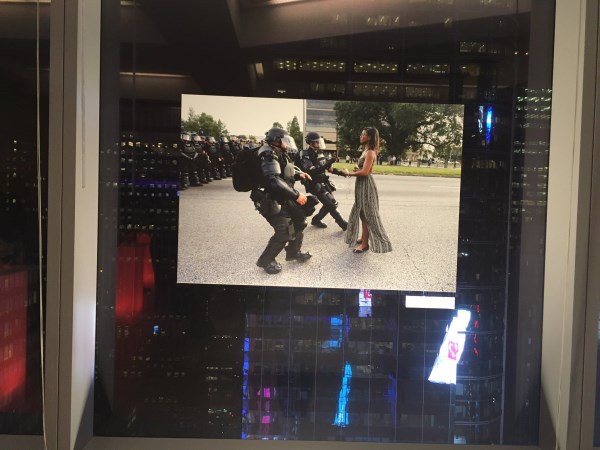 During a Black Lives Matter protest in Baton Rouge, demonstrator Ieshia Evans faces two police officers in riot gear as she's about to be arrested. She stands resolute in the middle of the road near the headquarters of the Baton Rouge police department. The contrast between her body language and those of the approaching police officers is made even more powerful by the flowing black-and-white dress she's wearing.

Photographer Jonathan Bachman knew he had a great shot, but didn't know it would be received as well as it has. The photo is now being hailed as legendary. “I knew it was a representation of what was happening in Baton Rouge at that moment,” he says. “But I really, honestly, never thought it was going to be something like this."

Evans, 35, a nurse and mother to a 5-year-old boy, was arrested at the protest and has since been released. She issued a statement saying she was safe and not yet ready to talk to the media. 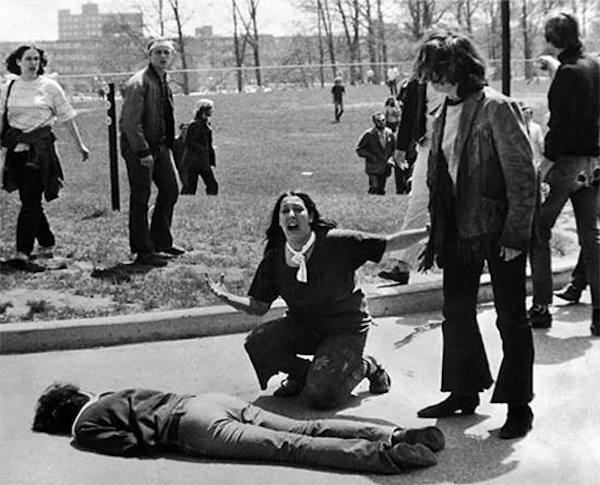 On May 4, 1970, 14-year-old Mary Ann Vecchio knelt screaming over the body of 20-year-old Jeffrey Miller, who was killed by the National Guard during a Kent State protest of the Cambodian Campaign. Photojournalism student John Paul Filo, 22, captured the image and was awarded the 1971 Pulitzer Prize for Spot News Photography.

Sometime in the early 1970s, an anonymous editor airbrushed the fence post above Vecchio's head out of Filo's photo. Since then, the altered image has circulated and has been reprinted in many magazines without knowledge of the original. 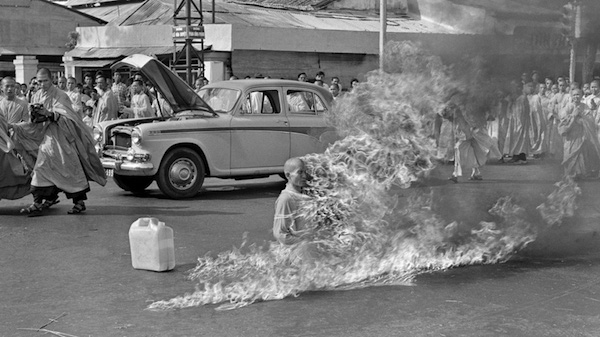 On June 10, 1963, AP journalist Malcolm Wilde Browne received a cryptic message from Saigon's Xa-Loi Buddhist pagoda that something important would happen at a memorial service being organized by the monks. The next morning, an elderly monk named Thich Quang Duc, clad in a brown robe and sandals, assumed the lotus position on a cushion in a blocked-off intersection. Aides drenched him with fuel, and the monk calmly lit a match and set himself ablaze. Browne was one of many journalists notified, but only he showed up. The photo of this shocking political protest against South Vietnam's U.S.-supported government appeared on front pages around the globe and sent shudders all the way to the White House, prompting President John F. Kennedy to order a re-evaluation of his administration's Vietnam policy.

The burning monk photo became one of the first iconic news photos of the Vietnam War. Of it, Kennedy said, “No news picture in history has generated so much emotion around the world as that one.” 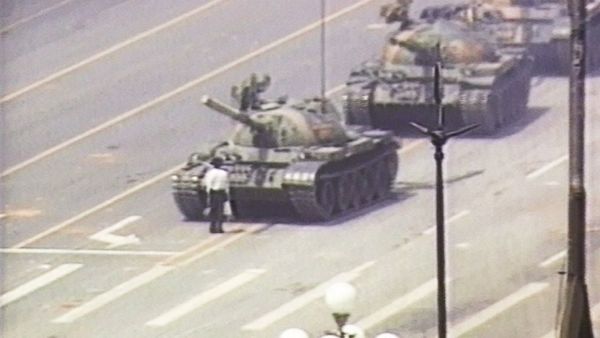 Photographer Jeff Widener was working for the Associated Press when he shot the iconic photo of "Tank Man" in 1989.

On June 4th of that year, a lone man with shopping bags in both hands stood tall in front of a column of oncoming tanks. A day earlier, troops had stormed through Beijing and into Tiananmen Square to crush the student-led political uprising by force.

The lead tank stopped and tried to dodge the defenseless man, who continued to block it at every turn. Finally, he shifted the bags to one hand, jumped onto the tank and appeared to talk to its driver.

Tank Man's fate and identity are unknown to this day, but Widener "always felt 'Tank Man' was like the unknown soldier. He will always symbolize freedom and democracy."

5The kiss during a Vancouver riot that captured the world's imagination 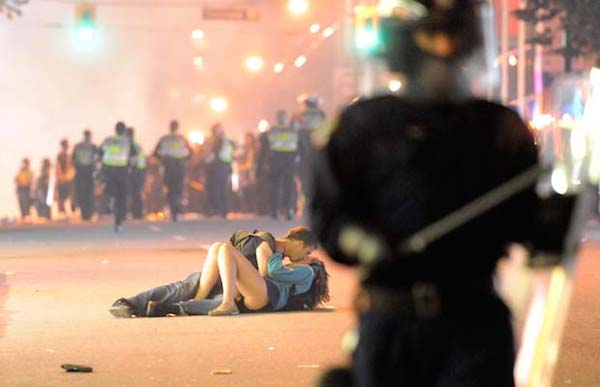 During the 2011 riots in Vancouver, a young couple was photographed sharing a tender moment as chaos raged around them.

Thousands of ice hockey fans took to the streets after the city's team lost the season-ending Stanley Cup Final. As chaos swirled around the couple, Alexandra Thomas was knocked to the ground by riot police before her boyfriend, Scott Jones, came to her aid. He gave her a kiss that won the heart of millions across the globe. (Jones later revealed that the intimate moment was not as romantic it looked, and said the kiss was an attempt to comfort Thomas when she became frantic.)

Jones and Thomas are still together today and are living in Australia. The iconic image of the romantic clinch was snapped by Getty photographer Richard Lam, who has given the pair a signed copy of the now-famous photograph, which is hanging up in their bedroom.

6The lone man who refused to salute Hitler

In the photo above, a Nazi stands with his arms crossed while everyone around him salutes Hitler as he passes. The man standing in silent protest is August Landmesser, and he was married to a Jewish woman.

In 1930, with Germany's economy in a shambles, Landmesser became a card-carrying Nazi in the hope that having the right connections would help land him a job. But this was not to be.

He fell in love with Irma Eckler. Their engagement got him expelled from the party, and their marriage application was denied. They had a baby girl, and the family made a failed attempt to flee to Denmark. August was arrested and charged for “dishonoring the race,” and briefly imprisoned. He acquitted for lack of evidence, but with a severe warning that punishment would follow if he dared repeat the offense. He did—and spent 30 months in a labor camp.

While he was gone, Irma was snatched up by the Gestapo and sent to various prisons and concentration camps, where she would eventually give birth to Irene, the couple's second child. She later died in the gas chambers at Bernburg. After his release from prison in 1941, Landmesser was drafted in a penal military unit and disappeared in Croatia in 1944. Both he and his wife were legally declared dead in 1949.

7The protest images a university tried to erase from the Internet 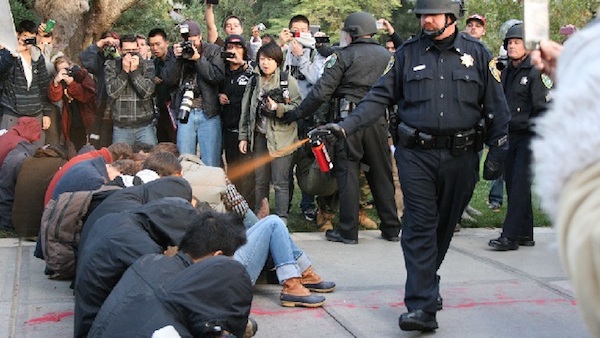 The above photo of Lieutenant John Pike—the now-infamous UC Davis police officer casually unloading a can of pepper spray on the bowed heads of seated student protesters—has traveled around the world since it was taken in 2011.

The image has been compared to those of 1960s civil rights protesters being fire-hosed in Alabama and, according to Megan Garber from the Nieman Journalism Lab, "captures a moment of violence and resistance in almost allegoric dimensions."

Brian Nguyen, a first-year student at UC Davis who worked for the school newspaper, shot the photo. After the controversial images of the protest had gone viral, the university paid a public relations firm at least $175,000 to help restore its reputation by scrubbing the photo from the web. Judging by how quickly it took us to find the original image (and all the corresponding memes), it didn't work!

8The photo that defined the counterculture movement of the 1960s

In 1967, photographer Bernie Boston took the above photo during an anti-Vietnam war protest in front of the Pentagon and knew instantly it was a great shot. His editors at the now-defunct Washington Star newspaper didn't agree and buried it inside the paper. Undeterred, Boston entered the photo in contests and, as he says, "it started winning everything and being recognized.”

18-year-old George Edgerly Harris III was the young protester who appears in the historic photograph. He would later reveal that he was gay. He took the stage name Hibiscus and co-founded the far-out, psychedelic theater group The Cockettes. Harris died in 1982, an early victim of the AIDS epidemic. 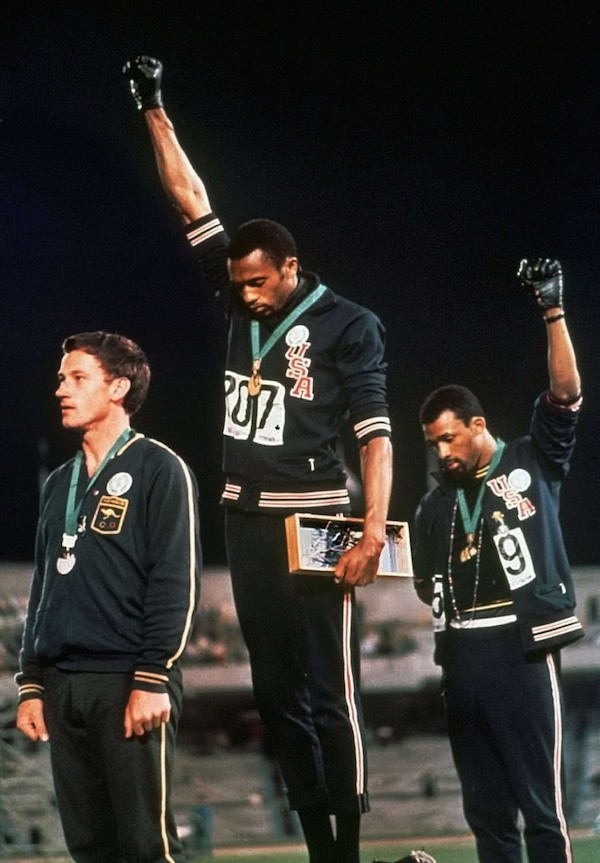 In 1968, inner-city riots and student protests rocked the U.S. as the war in Vietnam escalated. During the Mexico City Olympics, African-American sprinters Tommie Smith and John Carlos took to the podium after winning gold and bronze medals in the 200m. As the opening bars of The Star-Spangled Banner began, they raised a gloved fist in the air and bowed their heads, silencing the stadium and stunning television viewers around the world. Life magazine photographer John Dominis captured the image from about 20 feet away from the podium.

And what about the third man in the photo, Australian runner Peter Norman? He was a keen supporter of the U.S. civil rights struggle and wanted to add his support. He grabbed an Olympic Project for Human Rights badge and pinned it to his tracksuit, showing his backing for an organization despised by the International Olympic Committee.

In Australia, newspapers turned on Norman for supporting “Negro militants." He was passed over for the 1972 Olympics, despite being the country's top runner. He was not even invited to participate in the Sydney Olympics celebrations in 2000.

He remains a hero to many Americans, nonetheless. After he died of a heart attack in 2006, Smith and Carlos carried his coffin at the funeral. 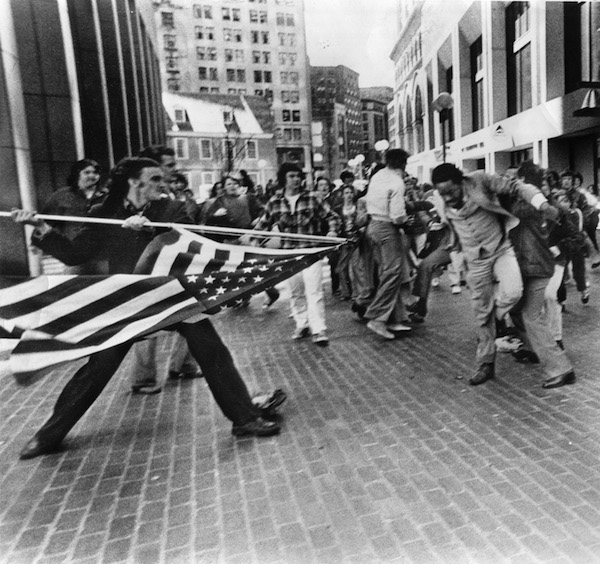 Photographer Stanley Forman arrived early for his shift at Boston's Herald American newspaper on April 5th, 1976, and headed out to an anti-busing demonstration at Boston City Hall that another journalist was already covering.

Desegregated school-busing in Massachusetts had taken place two years prior, but segregation protests were still raging. During one such demonstration, a black attorney named Theodore Landsmark was attacked by a group of white teenagers as he exited City Hall. One of the attackers, Joseph Rakes, 17, charged towards Landsmark using the American flag and its flagpole as a lance. (In reality, Rakes swung the flag. He missed Landsmark, who was being helped to his feet.)

The next day, the photo appeared on the front pages of prominent newspapers including the Washington Post, the Chicago Tribune, and the San Francisco Chronicle. Forman won a Pulitzer Prize for the image, which he submitted under his editor's suggested title, “The Soiling of Old Glory.”

Rakes was convicted of assault with a deadly weapon and sentenced to two years imprisonment and two years probation, but his sentence was later suspended. He said of the photo, "I saw the image and thought, 'Who is that lunatic with the flag?' Then I realized—it was me."