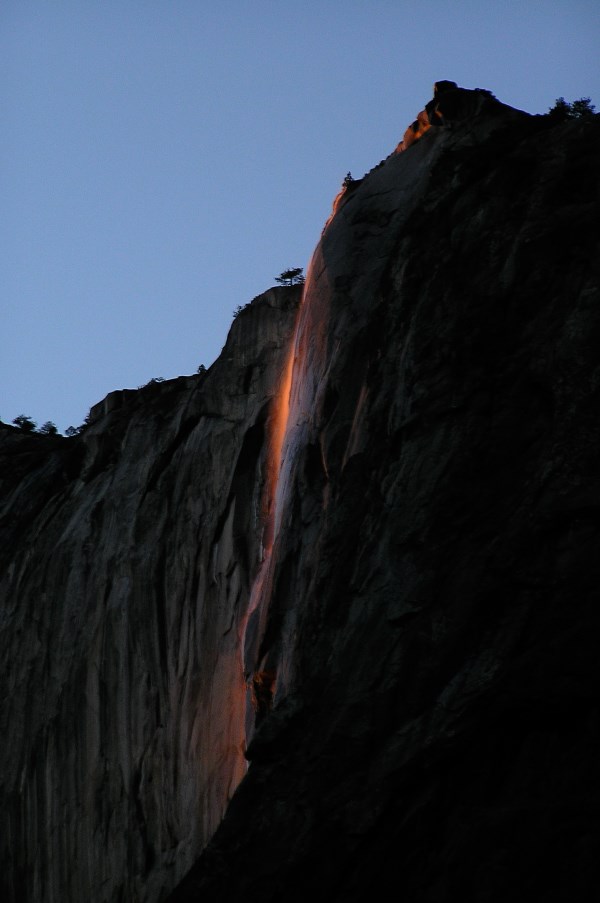 Horsetail Fall flows in winter and early spring from the El Capitan mountain in two distinct streams and drops some 1570 feet onto steep slabs spraying up in a mist before continuing down another 500 feet to the bottom of the mountain.

During the last two weeks of February, Horsetail changes hue and becomes a "fire fall." As day turns to night and last rays of sunlight disappear, they hit and reflect off the falls at the exact right angle creating a spectacular, if short-lived, effect which looks like a beautiful, flowing cascade of fluid fire. 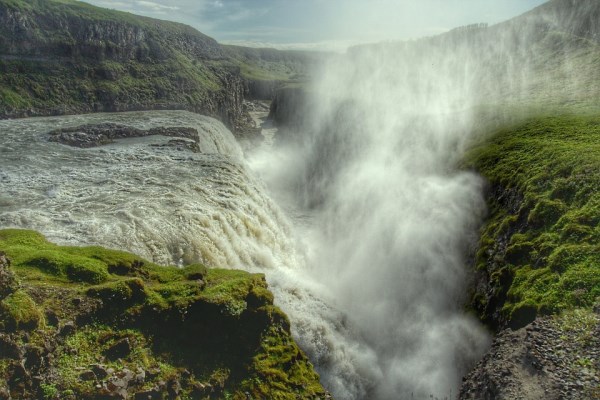 A fog waterfall cascaded from a cliff in Iceland was captured on camera in 2015 by Icelander Kjartan Gunnsteinsson.

The clip shows the fog running off the side of a precipice in Djupadal and falling gently into the Breidafjordur fjord below. The anomaly is thought to have been caused by a temperature inversion, when rising hot air acts as a seal and keeps the cold air trapped beneath it. 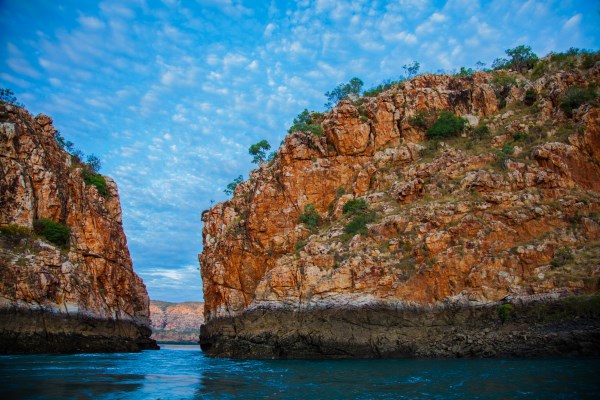 There are only two horizontal waterfalls in the world, and both of them are situated deep within Talbot Bay in the Buccaneer Archipelago of the Kimberley region of Western Australia. This natural wonder consists of a pair of gorges in the McLarty Range.

Significant amounts of water are pushed through these gorges by powerful tidal waves, producing spectacular temporary waterfalls up to five meters in height. The direction of the flow of the water changes as the tide changes. When the falling or rising tides occur, the water builds up in front of the gorges faster than it can flow through them. The massive tidal currents create a spectacular waterfall effect, as the water rushes through the gorges, down to the lower levels on the other side of the ridgelines.

Though it doesn't impress by size or flow, what sets the Big?r Waterfall apart is its peculiar shape and location — a moss covered extension of a cliff over a small river (Mini?). The waterfall is located exactly on the 45 parallel, halfway between the Equator and the North Pole, and is one of the most unique waterfalls in the world. 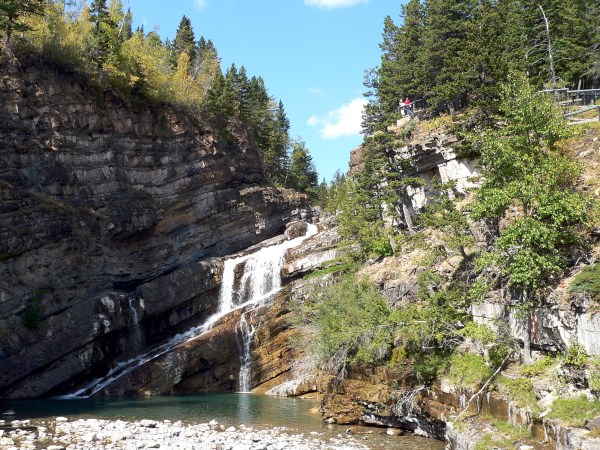 Cameron Falls is located in Alberta, Canada. If you find yourself in Waterton Lakes National Park in the month of June, you can see an extremely rare phenomenon occur when Cameron Falls turns pink.

In the springtime, torrential rains stir up a sediment called argillite. When the light gets reflected on this mineral, the water turns a beautiful pinkish-red. 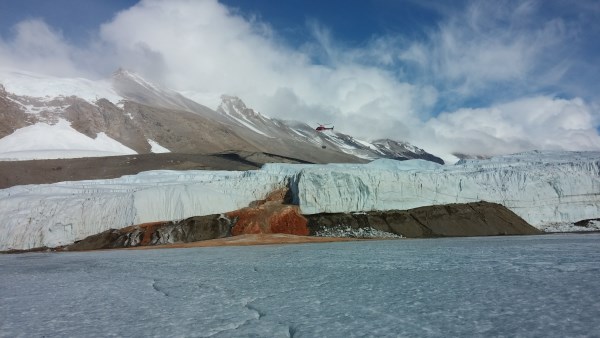 It's obviously not real blood that gives Blood Falls its name, but, instead, a five-million-year-old subterranean lake. When the glaciers that formed on top of the lake began to freeze, the water below became salty. Today, the salt content of the subglacial lake under Blood Falls is three times greater than seawater and is too salty to freeze. The lake is trapped beneath a quarter mile of ice and cut off from the atmosphere. It has never seen sunlight and is completely devoid of oxygen. It's also extremely rich in iron, When water from the subglacial lake seeps through a fissure in the glacier, the iron-rich water comes into contact with the air and rusts, depositing blood red stains on the ice as it falls. 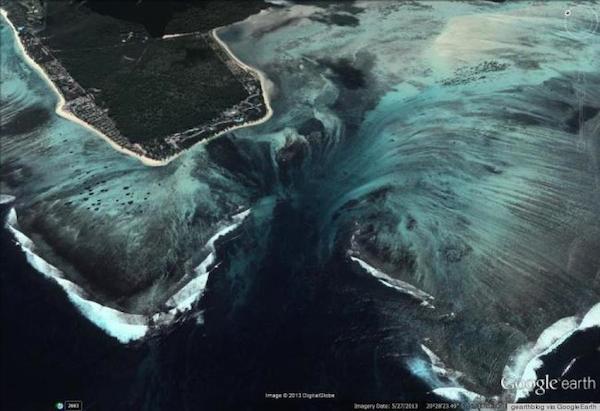 Okay, we know it's technically NOT a waterfall off the coast of the Republic of Mauritius—just an optical illusion that makes it look like there's an underwater waterfall within the ocean. As the sand and silt sink farther into the sea, from one coastal shelf to a much, much deeper one, it sure looks like one, though, doesn't it? 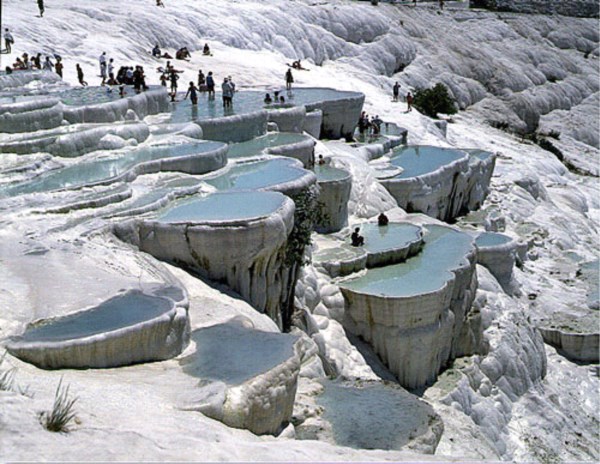 Pamukkale (which roughly translates to "cotton castle" in Turkish) is located in southwestern Turkey and has been a UNESCO World Heritage Site since the 1970s.

Its famous terraces are made of travertine: carbonate minerals, that have been left by the flowing water. The beautiful natural structure is 2,700 meters (8,860 ft) long, 600 m (1,970 ft) wide and 160 m (525 ft) high.
Pamukkale has been used as a natural bathing spot for centuries. Ancient Greeks and Romans discovered the curative properties of the warm mineral springs that are found there. The springs attracted droves of tourists to the place, not only to seek therapeutic comforts but also to see the magnificence of the hardened calcium bicarbonate cascading over the cliffs. 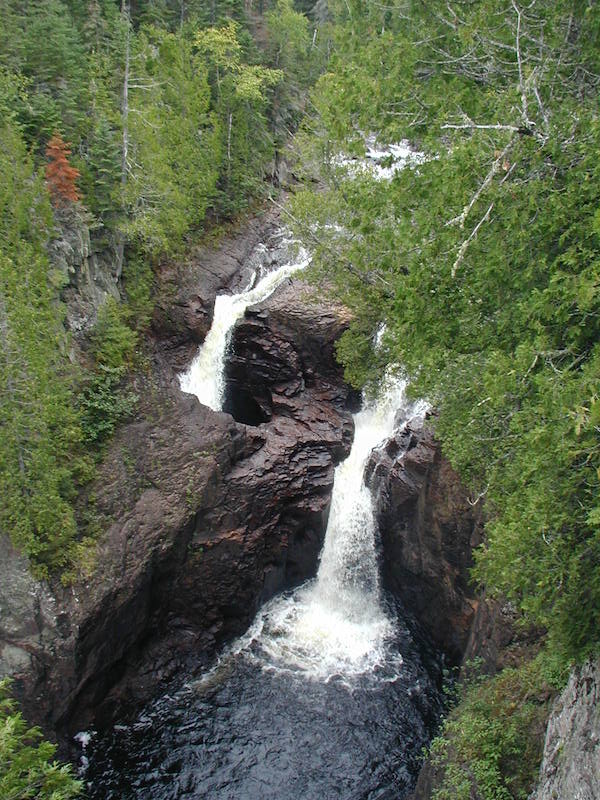 Devil's Kettle Falls is a geological anomaly. Located on Lake Superior's northern shore, where the Brule River forks in Judge C.R. Magney State Park in Grand Marais there's a double waterfall, but that's not the weird part. One side of the falls flows into a river, but the other side of the waterfall empties into—well, we just don't know. No one's been able to figure out where the water goes. Researchers have tossed items including ping pong balls and dye into the hole, but no one has ever found any sign of them anywhere else. 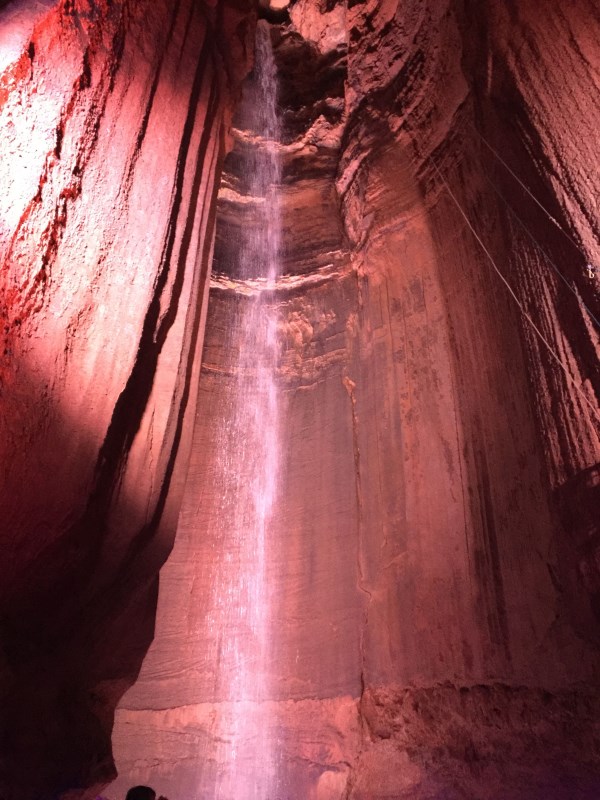 Ruby Falls is the deepest commercial limestone cave in the U.S. and also the most-visited underground waterfall in the country, with more than 400,000 visitors per year.

The 145-foot waterfall was named after Ruby Lambert, the wife of the man who discovered it. The water contains high levels of magnesium, which means if you drink enough of it, you might find yourself on the toilet for a few days. (Magnesium is a natural laxative).