The Langjokull ice cave, Iceland's newest tourist attraction, opened on June 1, 2015. With an area of about 950 km² (and most of it rising between 1200 and 1300 meters above sea level), the cave stretches 200-300 meters into solid glacier ice at 30 meters below the surface, making it the largest man-made ice structure in the world. Once inside, you can see ice that has taken hundreds of years to develop. As you walk further along the tunnel, the ice gets older, and the color changes from white to deep blue. 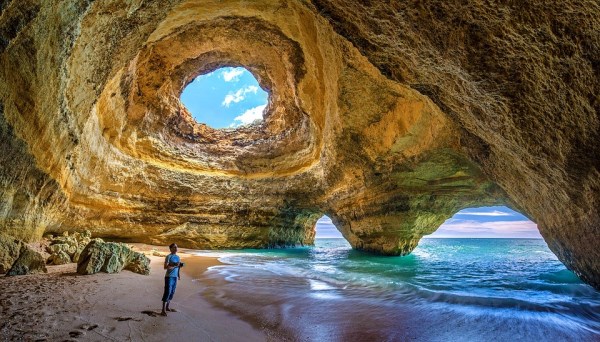 The Benagil Sea Cave is part of a system of caves that lines Portugal's southern coast in the Algarve region. This most iconic cave is located near the beach in the tiny town of Benagil.

The coastline runs for about 150 kilometers and is dotted with alternating beaches, cliffs, and caves, the latter of which bear interesting formations like skylights and often host picturesque variations of light throughout the day. 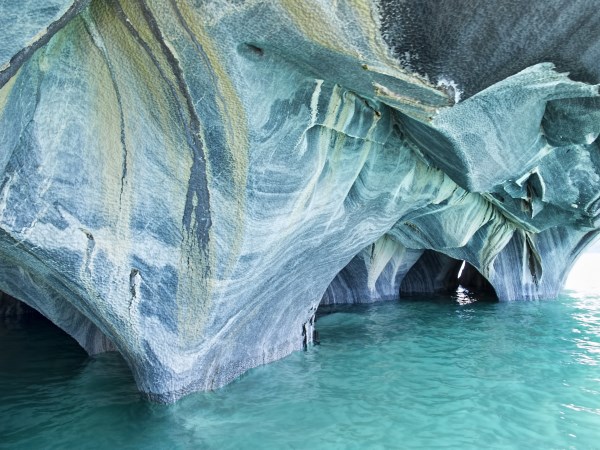 The Marble Caves are located on Lake General Carrera/Buenos Aires in Patagonia, Chile. The vibrant blue and gray cave chambers (some of which are submerged) all lay in the mesmerizing, turquoise waters of Carrera/B.A Lake. The caves are on the Chilean side of the lake, and the most famous are the Chapel (La Capilla), the Cathedral (El Catedral), and the Cave (La Cueva).

This unique geological formation features a group of caverns, tunnels, and pillars created in monoliths of marble and formed by waves over the last 6,000 years or so. You can visit them in a small boat or kayak, but only when the weather is nice, and the water is mostly still. 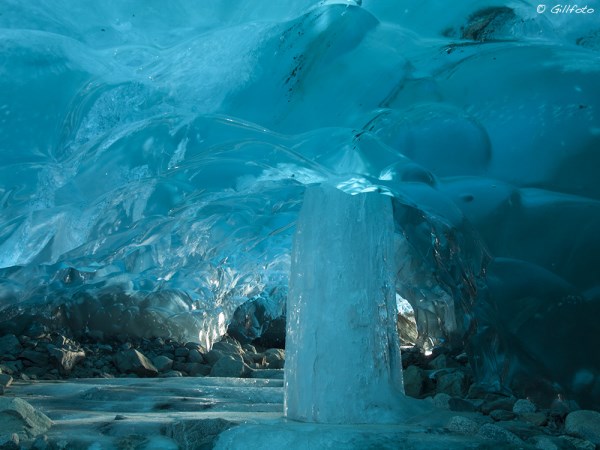 There are only a few places on Earth where can you experience every stage of the water cycle at once—there's magic in the Mendenhall Ice Caves, where water runs over rocks and under blue ceilings inside a partially hollow glacier.

The Ice Caves are inside the glacier and are accessible only by kayak and scaling the ice. 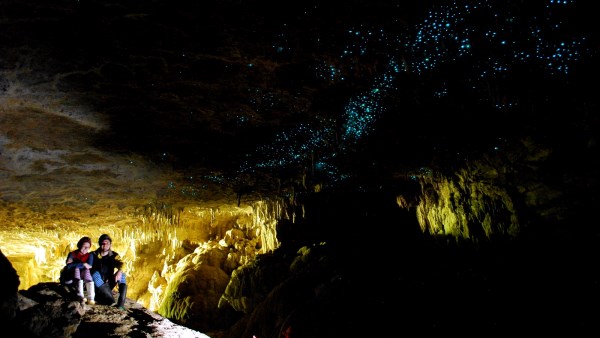 The Waitomo Glowworm Caves are located on the North Island of New Zealand. The area is known for its population of glowworms (Arachnocampa Luminosa) which are around the size of an average mosquito.

This cave is part of the Waitomo Cave system that includes the Ruakuri Cave and the Aranui Cave. At the entrance to the attraction, there's a modern visitors center where you can schedule an organized tour that include a boat ride under the glowworms.

Geological and volcanic activity have created around 300 known limestone caves in the Waitomo region over the last 30 million years. The limestone is composed of fossilized corals, seashells, fish skeletons, and many small marine organisms. Over the years, these fossilized rocks have been layered upon each other and compressed to create the limestone, which can be over 200 meters thick in some areas.

The caves formed when Earth's movement caused the hard limestone to bend and buckle under the ocean and rise above the sea floor. As the rock was exposed to air, it separated and created cracks and weaknesses that allowed water to flow through dissolving the limestone. Over millions of years, large caves were formed. 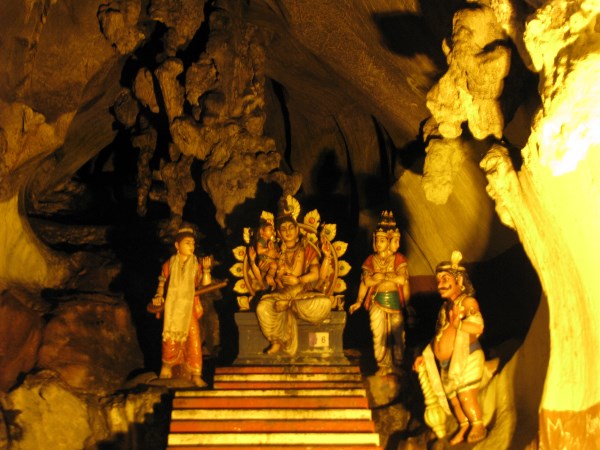 Batu Caves is a limestone hill that has a series of caves and cave temples in Gombak, Selangor, Malaysia. It takes its name from the Sungai Batu (Batu River) which flows past the hill. (Batu Caves is also the name of the nearby village.)

The cave is one of the most popular Hindu shrines outside India. Dedicated to Lord Murugan, Batu Caves is the focal point of the Hindu festival of Thaipusam in Malaysia.

The limestone forming Batu Caves is said to be around 400 million years old. Some of the cave entrances were used as shelters by the indigenous Temuan people (a tribe of Orang Asli). As early as 1860, Chinese settlers began excavating guano from the cave for fertilizing their vegetable patches.

Of the various cave temples that comprise the site, the largest and best known is the Temple Cave, so named because it houses several Hindu shrines beneath its high vaulted ceiling. Wooden steps up to the Temple Cave were built in 1920, but those have since been replaced by 272 concrete steps. 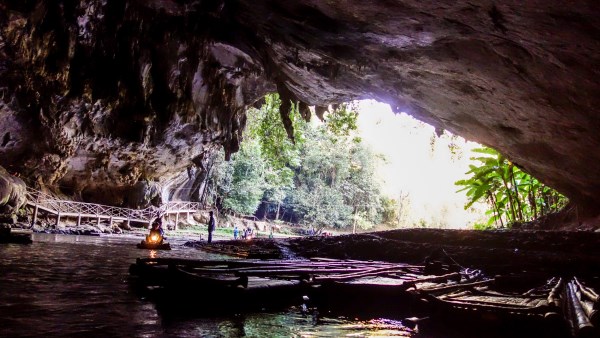 Tham Lod is one of Thailand's most impressive and easily accessible caves, for its size, its attractive limestone stalactite formations and an unusual coffin cave hidden within the main cave. Tham Lod is more than 1.5 kilometers long, which is still considerably smaller than some other caves in the area, but the main chamber is spectacular—it is 50 meters high from floor to ceiling.

The Lang river flows through more than a third of the cave, which gives you an opportunity to float through on bamboo rafts in the darkness, listening to and smelling the bats overhead. 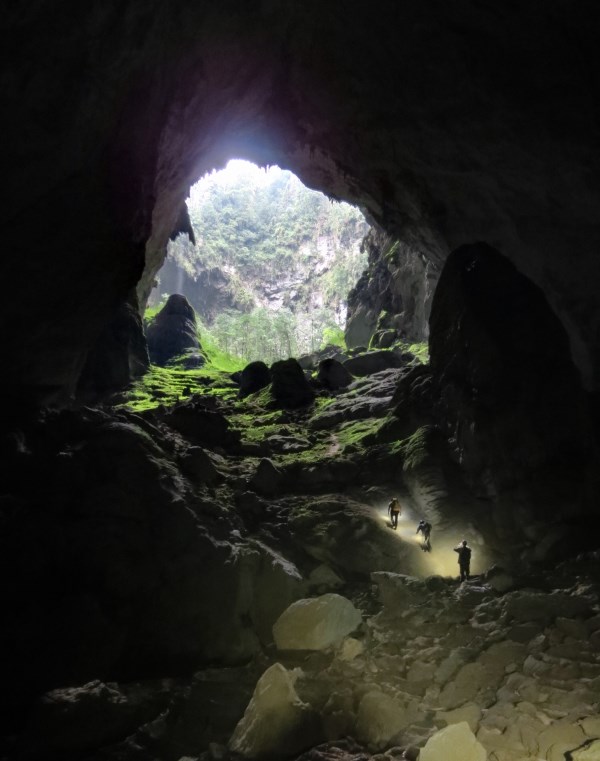 Son Doong is the world's largest cave and is located in Quang Binh province, Vietnam. It was created 2-5 million years ago by river water eroding the limestone underneath the mountain. In places where the limestone was weak, the ceiling collapsed and created huge skylights.

At more than 200m high, 150m wide and 5km long, the cave is so big it has its own river, jungle, and climate. However, the entrance is quite small. Mist from the cave, caused by the cooler air inside meeting the hot air outside, rises into the surrounding forest. Visitors must descend 80m down a steep wall with the use of harnesses and ropes. The huge temperature difference also creates moving clouds of mist, especially near the two karst windows, which gives the cave its magically surreal atmosphere. 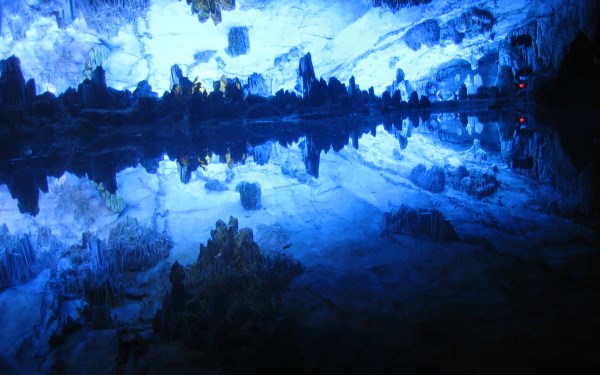 180-million-year-old Reed Flute Cave was discovered more than 1,000 years ago. Located five kilometers northwest of the city of Guilin, Reed Flute Cave—or the Nature Art Palace—is a bright and colorful cave marked in almost all travel itineraries. It got its name from the green reeds that grow at the entrance, from which people used to make flutes and whistles. Inside are a spectacular variety of stalactites, limestone pillars and rock formations formed from thousands of years of water erosion.

The interior of the cave is a veritable gallery of gorgeous, artificially lit geological formations. Visiting the cave takes about an hour, and each formation has a legend or a poetic name such as Crystal Palace, Dragon Pagoda, Virgin Forest, the Flower and Fruit Mountain. The Crystal Palace of the Dragon King is one of the largest rooms of the cave, which can support up to 1,000 people—it was used as a shelter against air raids during WWII.

The interior walls are engraved with almost 70 inscriptions that tell tales of travel and feature poems of the Tang Dynasty. A park with elegant pavilions was specially built around the cave, with lakes, bridges, plants and gardens. 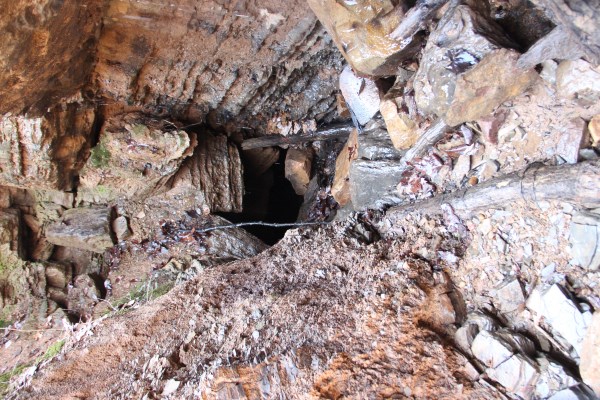 Ellison's Cave is a pit cave located in Walker County, on Pigeon Mountain in the Appalachian Plateaus of northwest Georgia. It is the 12th deepest cave in the US and features the deepest, unobstructed underground pitch in the country (the Fantastic Pit). The cave is over 12 miles long and extends 1063 feet vertically. During the Ordovician Period, tectonic subduction responsible for forming the Appalachians left some seismically active fault lines stretching from northern Alabama to eastern Tennessee. Continued orogeny created a large fault zone in the bedrock throughout the southern Appalachians and northern Georgia. This fracturing, along with the proliferation of gypsum and limestone, contributes to the exceptional depth of Ellison's.