In the early 20th century, novelty (programmatic) architecture was a popular and easy way to find businesses such as hotels or gas stations along heavily-traveled highways. However, with the advent of the Interstate Highway System, many local highways experienced a lessening in traffic, and these once-thriving businesses soon shut down. Without the support of tourists, many pieces of novelty architecture fell into disrepair and were demolished, or otherwise went past the point of restoration. The majority of the buildings featured here are still in existence and are all worth a visit! 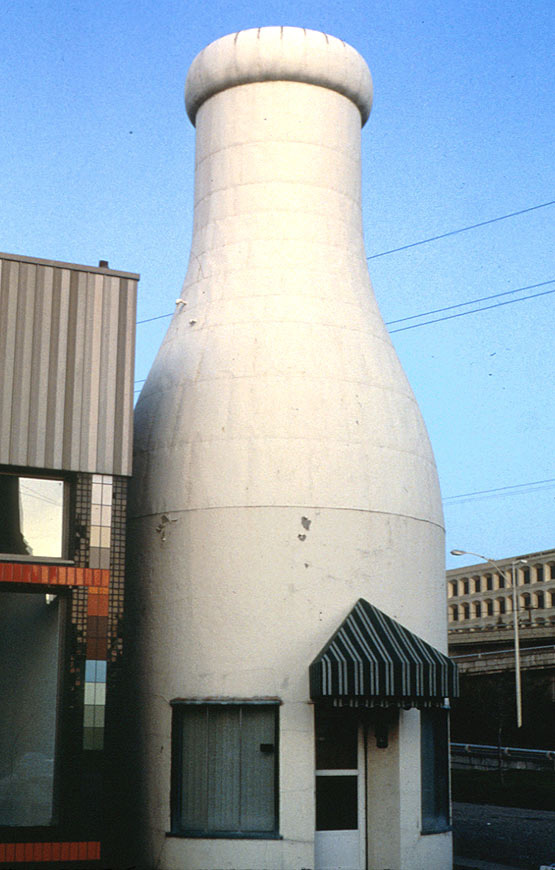 The Milk Bottle was the home of the Benewah Creamery Company. The owner initially planned to build six of these iconic outlets—at $3,700 each—but only completed the two stores that exist today. There wasn't a specified reason as to why plans for the other four bottles were scrapped, but the Depression-era economy (which had a profound impact on local farms and dairies) is likely to blame.

The Milk Bottle is listed on the National Registry of Historic Places and continues to be a favorite roadside attraction. Although the store on Garland was badly damaged in a fire in 2011, it has subsequently been restored, and the Benewah Milk Bottle is still in great shape after almost 80 years. 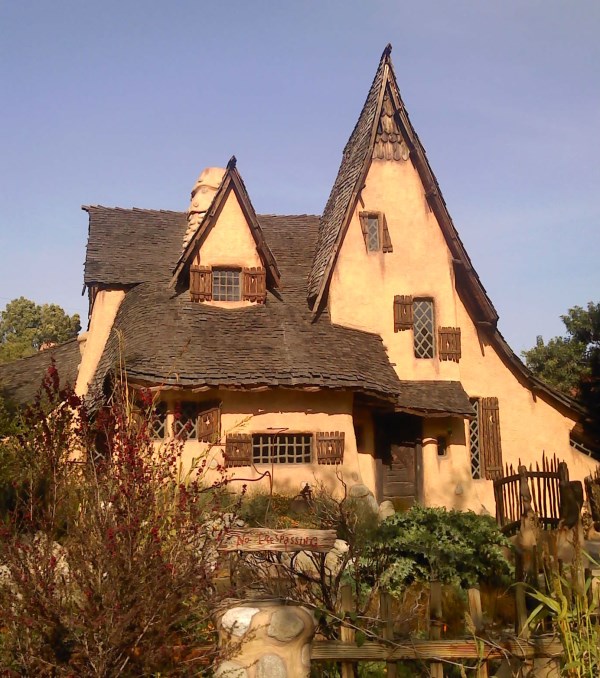 This strange storybook cottage that is located minutes away from Rodeo Drive was built in 1921 by Harry Oliver. Oliver, an Oscar-nominated art director, created the structure for the Willat silent film studio in Culver City. Despite its odd exterior, it was the site of studio offices and dressing rooms and was featured in several silent films until the industry gave way to talkies.

After Willat had closed, the cottage was set to be demolished. Sometime in the late '20s or early '30s (accounts vary), the house was relocated to Beverly Hills. It has remained a private residence ever since.

In 1997, the house went on the market for the first time in decades. It was represented by Michael Libow, a real estate agent who grew up in Beverly Hills and had "always loved the structure." During this time, Libow learned that prospective bidders had plans to purchase the property and tear down the building. To prevent this from happening, Libow ended up purchasing the $1.3M home for himself and has since worked with Hollywood art director Nelson Coates to restore the property. The house continues to be an attraction—between 3000 and 4000 kids visit every Halloween. 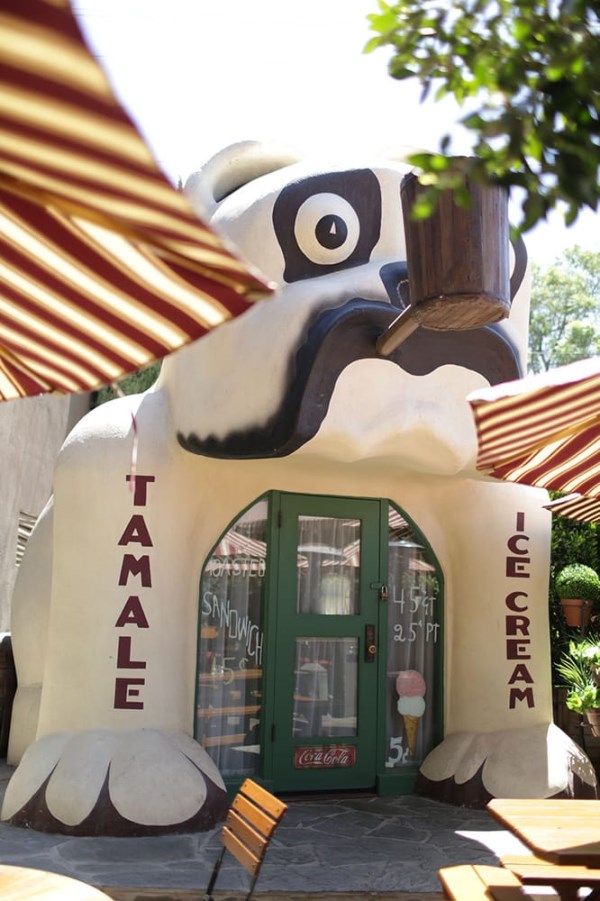 The iconic Bulldog Cafe was built in 1928 and operated for over three decades, luring road trippers in for some ice cream or tamales with its adorable dog design. This novelty restaurant appears in The Rocketeer movie (a small-scale version of the building was created for the film.)

Until late 2014, the Peterson Automotive Museum also had a small-scale replica of the Bulldog Cafe inside, but during a recent renovation, it was decided that the cafe would be demolished. Luckily, Petersen's version of the cafe was saved, and it is now sitting on the patio of the Idle Hour Cafe in North Hollywood (see item 5). 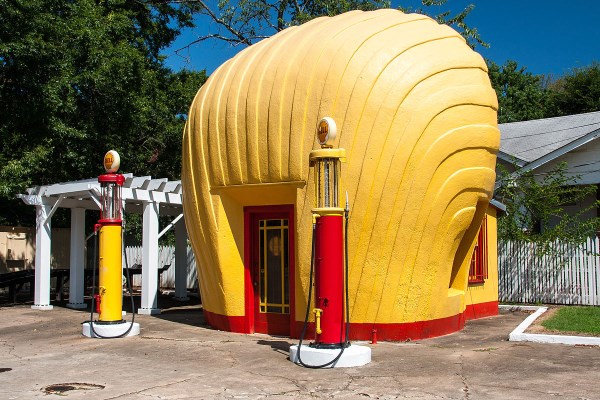 Winston-Salem's shell shaped service station is the last of its kind.

Eight of the unique stations were built in the late 1930s by the Quality Oil Company, a Winston-based marketer of Shell Oil. They were modeled on the brand logo of Royal Dutch-Shell Oil and constructed of concrete stucco over a bent wood and wire framework.

This station remained open until the '50s and housed a lawn mower repair business in the '70s and '80s. In 1976, it became the first individual station in America to be listed on the National Register of Historic Places.

After it had fallen into disrepair, Preservation North Carolina stepped in and restored the shell to its former glory. It is now used by the organization as a regional office and info center. 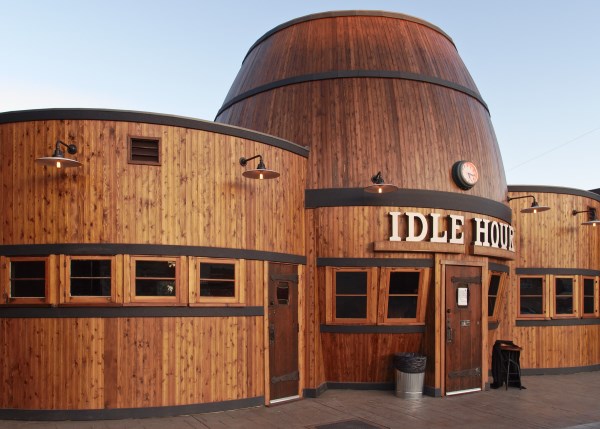 Decades ago, roads in Los Angeles were home to enormous hats, chili bowls, flower pots, owls, pigs, dogs, cameras, and airplanes. Today there are only a handful of these buildings left.

There were once several barrels around town, but the very last one, the Idle Hour Cafe in North Hollywood, had been empty and in disrepair since the 1980s. Amazingly, this pinnacle of novelty architecture has been beautifully restored and was reopened in early 2015.

The Idle Hour first opened in 1941. It was commissioned by a Universal Studios film tech, Michael D. Connolly. Connolly and his wife Irene lived in an apartment above the cafe until their divorce. When Connolly moved out, Irene took over. In 1971, she sold the building to Jose and Dolores Fernandez, who reopened the cafe as a flamenco dinner theater called La Caña. It closed in 1984. For a little over 25 years, the building sat vacant, until was landmarked by the city in 2010. It was purchased in 2011 and it's been lovingly rebuilt, restored and reimagined because very few original elements remained, and the structure was not up to code. 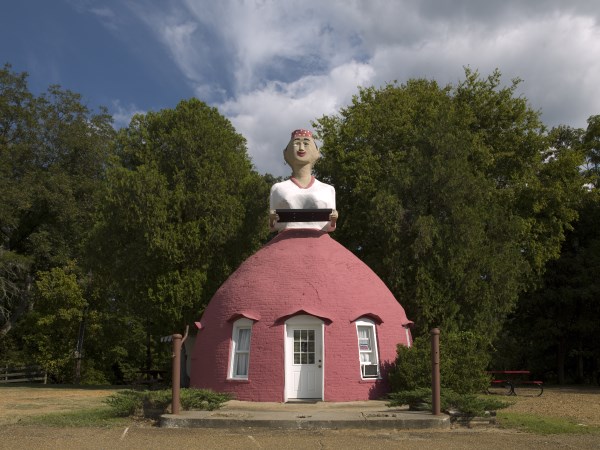 Mammy's was built by Henry Gaude in 1939. Gaude already had a gas station and wanted a roadhouse that would capitalize on the then-current craze for Gone With the Wind.

It's rumored that Mammy was originally designed as a white Southern belle, but Gaude transformed the big lady, making her African-American instead. (Black was considered better than white in the road-food visual shorthand of 1940s Natchez—it conveyed ideas of nurturing and nourishment.)

As the years passed, Mammy fell from grace. She was nearly bulldozed in 1979 but was saved at the 11th-hour by early roadside preservationists. Old photos of Mammy show that around this time her skin began to lighten with each subsequent repainting. She was purchased in 1994 by Doris Kemp, who introduced a menu of Mammy-cooked, Southern-style meals. Lorna Martin, Mammy's current owner, has wisely kept the menu unchanged and tourists still flock to this odd little corner of Natchez. 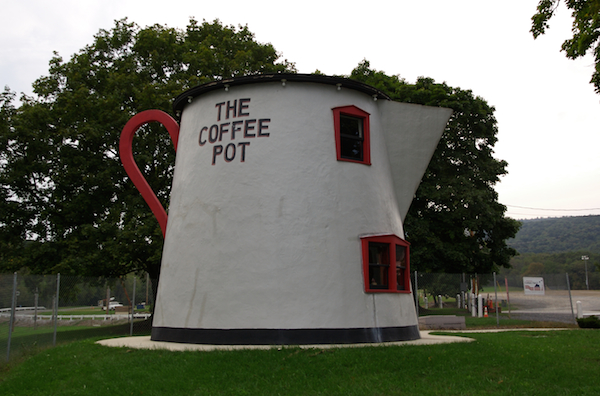 The Coffee Pot, also known as the Koontz Coffee Pot, was built in 1927 by David Berton Koontz to attract more customers to his service station. It was originally a small luncheonette connected to the Koontz Garage, right next to Lincoln Highway/U.S. Route 30 in Bedford, Pennsylvania.

The massive pot is made of brick and stands 18 feet tall and 22 feet wide. According to Roger Young of American Motorcyclist, in its prime, “the building was originally covered in sheet metal to more closely resemble its namesake kitchen appliance. (We wish we had seen that!) The two-story structure had a ground floor restaurant where Koontz served coffee, ice cream, and light lunches, and a small apartment above.”

The Coffee Pot caught fire on December 29, 1955, and went through a series of owners until it was finally closed in the 1980s and left vacant. It fell into disrepair over the next two decades and was about to be demolished. In 2003, The Bedford County Fair Association purchased the pot for $1, and the Lincoln Highway Heritage Corridor fully restored it and moved it across the street. Visitors may enter the building to view some of Bedford Fair's historical artifacts, which are kept on display inside. 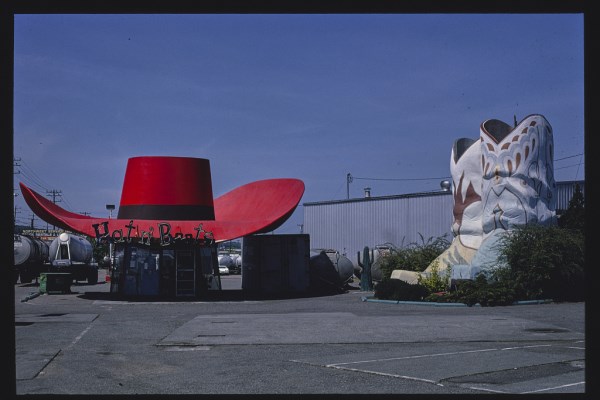 In 1955, Seattle developer Buford Seals intended the Hat ‘n' Boots filling station to be the centerpiece of a gigantic shopping center called Frontier Village off of Route 99. He was confident that people would flock to his mall if only he could find a way to attract their attention. He hired artist Lewis H. Nasmyth to design the enormous structure, and the two men built it themselves out of steel beams, plaster and chicken wire.

Seals spent $150,000 on the Hat ‘n' Boots. It was all the money he had, but he still managed to scrape together enough cash to build the (ordinary-looking) Frontier Village Supermarket. The mall never materialized, and the supermarket quickly went out of business, but the Hat ‘n' Boots remained a popular stop until the completion of Interstate 5.

After the Hat ‘n' Boots closed in 1988, it was moved to Georgetown's Oxbow Park in 2003. The landmark has since been restored to the delight of tourists and locals alike. 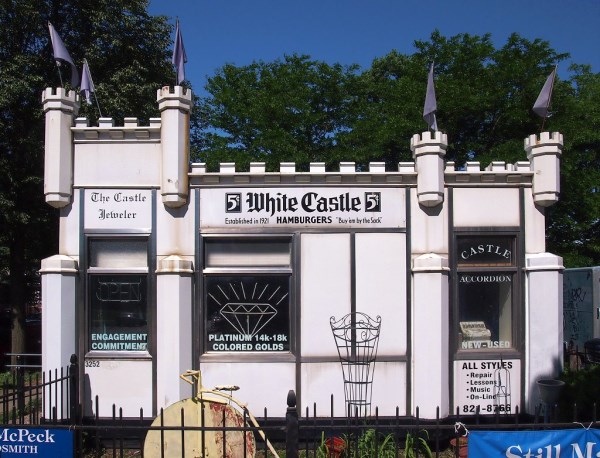 White Castle Building #8 is a former White Castle restaurant in Minneapolis. Built in 1963, the prefabricated porcelain and steel structure comes complete with buttresses and battlements. As a prefab, the restaurant could be moved from one site to another. Number 8 operated at three different locations in Minneapolis selling hamburgers for 5 cents. The building has since housed a contracting firm, an accordion shop and jewelry business, and an antique/vintage goods shop. It was listed on the National Register of Historic Places in 1986.

Usually, properties on the Register lose their designation if they are moved or significantly altered. The federal program recognized, however, that early White Castle restaurants were specifically made to be movable.

The Wigwam Motels (or Wigwam Villages) were series of distinctive landmarks that were mostly erected on historic U.S. Route 66 between Los Angeles and Chicago, the end points of the highway. They were patented by Frank A. Redford.

The motels were popular during the 1930s and 1940s. The chain originally had seven different locations—two in Kentucky and one each in Alabama, Florida, Arizona, Louisiana, and California.