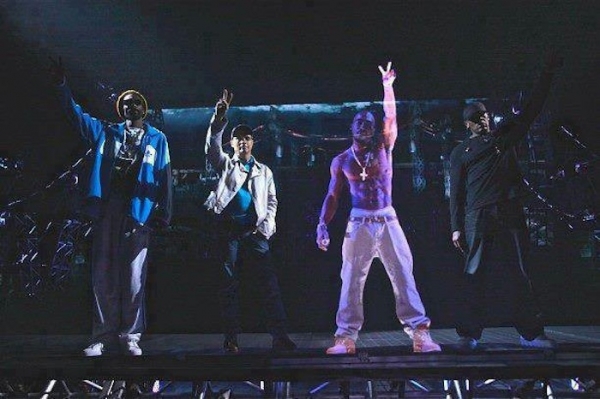 Tupac Shakur was killed in 1996 — three years before the first Coachella Valley Music & Arts Festival was held. But thanks to a trick of light, he was back onstage during the headlining set by Snoop Dogg and Dr. Dre on the last night of the festival in 2012.

Digital Domain Media Group, a company that has produced special effects for movies, used old theatrical technology with a 21st-century spin, and the help of a second company, AV Concepts.

Tupac walked on stage with the aid of a technique called "Pepper's Ghost," which dates back to the 16th century. The trick requires two rooms, a main room (in this case, a stage) and an adjacent hidden room. In the main room, there's an angled piece of glass that reflects an image from the hidden room so that it appears like it's actually there.

"It is amazing, no question about it," David Brady, the head of the Duke Imaging and Spectroscopy Program at Duke University, said. "The impressive thing here is how life-like and detailed and natural it seems, and that's just an outcome of advances in computer rendering [rather] than display."

In June 2015, rapper Ray J celebrated what would have been Tupac's 44th birthday by getting down with the late rapper's hologram at the Hologram USA showroom in Beverly Hills. Apparently, anyone can now hang with Tupac...for free. 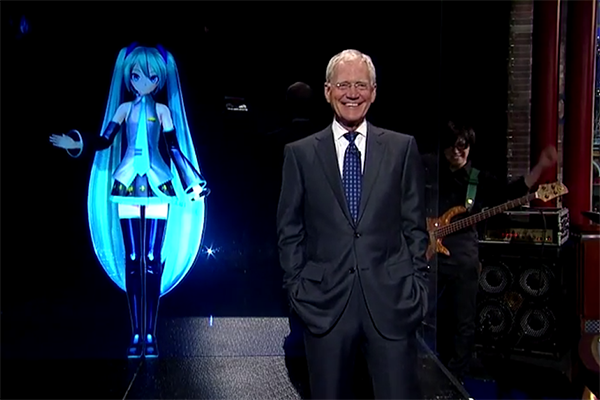 In October 2014, a Japanese hologram performed on The Late Show With David Letterman. Hatsune Miku is a “Vocaloid,” an animated character that “sings” with the help of a synthesizer and performs with a backing band made of real people. Developed by Crypton Future Media in Japan, she's not the only Vocaloid singer in existence, but she's the most popular. Miku is a hologram in name only— she's projected on stage using the same "Pepper's Ghost" optical illusion used to make the representation of Tupac at Coachella in 2012. In summer 2014, Miku opened for Lady Gaga's “artRave: The ARTPOP Ball Tour” tour during its first month.

Watch her sing "Sharing the World" on Letterman. below: 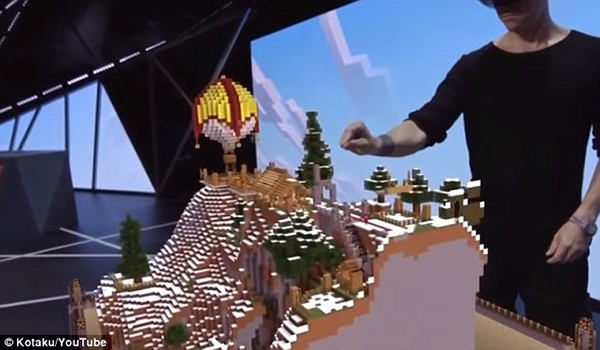 With Microsoft's new HoloLens headset, we get a glimpse of what Minecraft could look like in the future.

In a video from the annual E3 video game conference in June 2015, a person "plays" Minecraft by projecting the iconic, blocky world onto his living room floor and furniture. With just a flick of the finger, he places new bricks, explodes TNT, and carves out walls, leading to vast, expansive worlds.

It looks pretty cool, but remember—it's still very much in the demo stages. 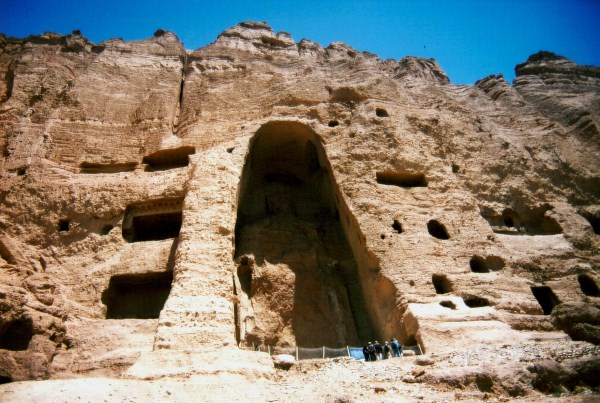 A Chinese couple used a 3D laser light show to restore one of two sacred Buddha statues that were destroyed by the Taliban after they were declared to be false idols.

The 1,500-year-old Buddhas of Bamiyan, which were once carved into a cliff face in Afghanistan, were blown up in 2001.

Zhang Xinyu and Liang Hong, a millionaire couple from Beijing, were so saddened by the destruction of the ancient relics that they took it upon themselves to resurrect the statues.

With 3D light projections, the couple recreated the 175-foot statue in the place it once stood. They gained permission from UNESCO, who has marked the Bamiyan Valley as a world heritage site. About 150 spectators witnessed the light show after sunset on June 6 and 7, 2015.

5The scientists who created a touchable hologram 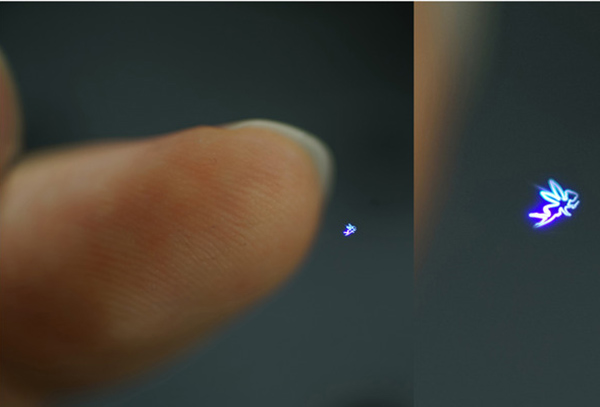 Researchers in Japan are paving the way for a phenomenon we've long dreamed about—interactive holograms.

Designers at the Digital Nature Group at Japan's University of Tsukuba were able to create 3D images by using scanners, mirrors, and high-speed, high-intensity lasers.

Firing lasers emitted by the femtosecond (that is, a quadrillionth of a second) produces safer results than those generated by the nanosecond. It is the first time this kind of imagery has been developed that isn't harmful to the human touch. Similar plasma-induced technology has never been able to yield such high-resolution images and tended to burn at the touch.

So, what does a hologram feel like? According to the powers that be, sandpaper. 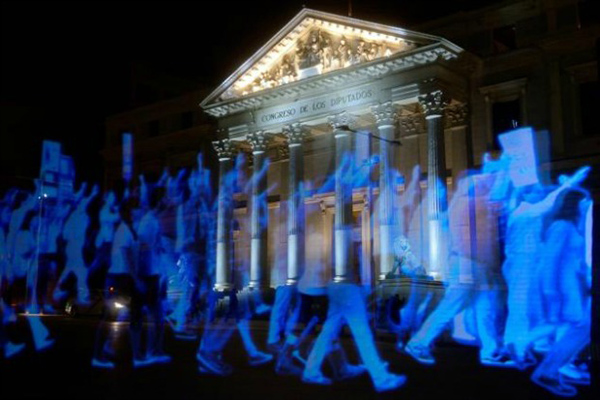 In April 2015, a protest group, No Somos Delito, pulled off an undeniably futuristic stunt in Spain—they sent hologram marchers parading past the lower house of the country's parliament.

Why? The protest was just the latest in the group's campaign against a series of “citizen security” bills, which received final passage in March 2015. The new laws criminalize gathering in protest in front of Parliament. The law also makes taking or distributing “unauthorized” photographs of police a crime punishable by a €30,000 fine. All in all, the laws would create 45 new infractions, mostly centered on cracking down on dissent.

A spokesman for the group drove the point home. He said, "Our protest with holograms is an irony. With the restrictions on our freedoms of association and peaceful assembly, the last option that will be left to us will be to protest through our holograms.”

7A Florida company lets you deliver your own eulogy via hologram 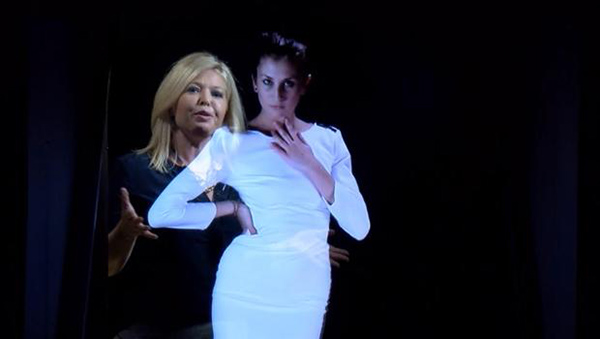 At one time, holograms were science fiction and then became a very expensive reality, requiring costly projectors and virtual smoke and mirrors. Not anymore. Carl Minardo, the president of AIM Holographics in West Palm Beach, Florida, believes that consumers will jump at the chance to send their 3D images into the future.

Mindardo's company uses a projection screen called a "holo-cue" that produces life-size 3D images. He says the technology could be used for product demonstrations and other business applications, but believes his biggest market will be with customers interested in recording messages to be projected at their funerals.

"It gives you an opportunity to talk to the people who are important in your life and let them know how much they meant to you," Mindardo said. 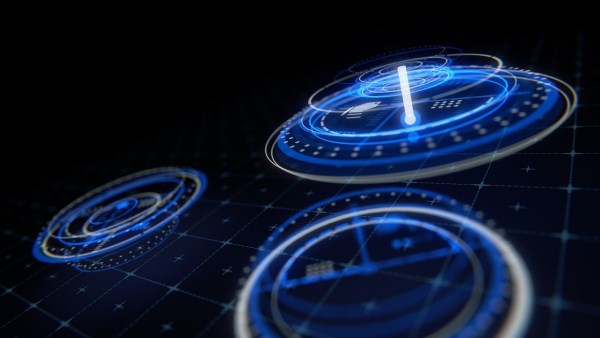 In 1997, physicist Juan Maldacena put forth a strange theory — we are living in a giant hologram, and everything we see around us is merely a projection of a two-dimensional surface. At the time, Maldacena was able to prove its existence in equations that only partially explain our universe. But now researchers in Austria have been able to show how this principle can also work in a more realistic model of our cosmos.

Like the security chip on your credit card, there is a two-dimensional surface that we can't see. This surface contains all the information needed to describe a three-dimensional object, which, in this case, is our universe. In essence, the principle claims that data containing a description of a 3D object could be hidden in a region of this flattened, "real" version of the universe.

Maldacena came to this conclusion when he discovered that mathematical descriptions of the universe actually require one fewer dimension than it seems. However, the principle has only been studied in exotic spaces with negative curvature. (Scientists came up with these spaces as way to combine describing gravity in a three-dimensional setting while predicting quantum particles in two spatial dimensions.)

The latest study by scientists at the Technology University of Vienna now suggests that the holographic principle holds in a flat space-time. To test the theory, scientists spent three years creating gravitational equations that do not require exotic spaces and, instead, live in a flat space.

The one key feature of quantum mechanics—quantum entanglement—had to appear in the most realistic model of our universe. The result? The team showed that this entanglement takes the same value in both a flat quantum gravity model and in a low dimension quantum field theory.

"This calculation affirms our assumption that the holographic principle can also be realized in flat spaces," said Max Riegler at the Technology University of Vienna. "It is evidence for the validity of this correspondence in our universe."

SourcePhoto
It should be noted that while all of the above are called holograms in popular culture, many are not true holographic imagery, but are instead optical illusions.