In 2014, after the World Cup, the modeling industry had a new "it" girl in soccer fan Axelle Despiegelaere. (I'm sure most of you will remember Larissa Riquelme, the Paraguayan fan from the previous World Cup.) The Belgian teenager was about to achieve stardom by becoming one of the faces of the World Cup and landed herself a modeling contract after being spotted in the crowd in Brazil.

After she had returned home, she set up a Facebook page that quickly attracted thousands of likes. A couple of days later, the 17-year-old announced she had signed with L'Oréal.

But her happiness was short-lived. L'Oréal announced the company was no longer working with the teenager, after she uploaded a photo of herself hunting, with the following caption: “Hunting is not a matter of life or death. It's much more important than that..this was about 1 year ago…ready to hunt Americans today haha.” 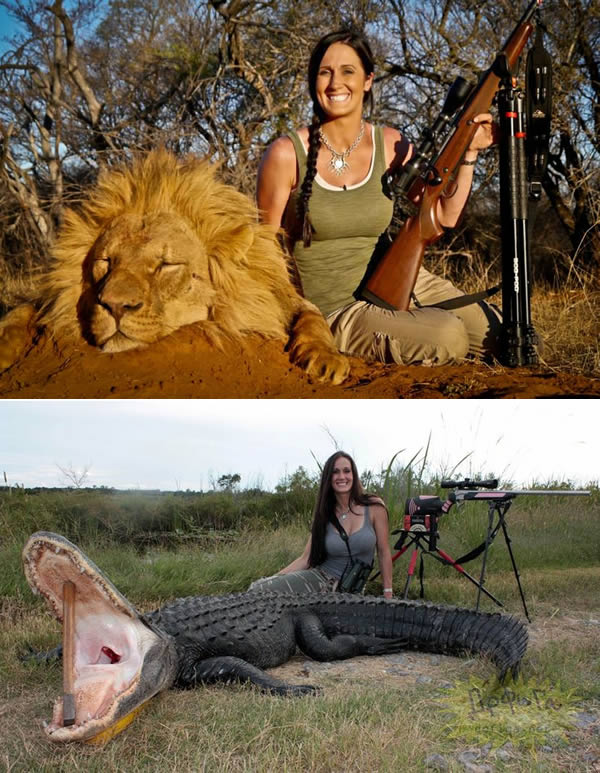 In 2013, Melissa Bachman, a TV presenter from Minnesota and an avid life-long hunter, posted a hunting photo on her Twitter feed. She wrote, “An incredible day hunting in South Africa! Stalked inside 60-yards on this beautiful male lion. What a hunt!"

After posting this, animal rights activists and the public freaked out. They immediately started harassing her. The harassment became so insane that she shut down her Twitter profile. A petition even popped up on Change.org asking the government of South Africa to ban her from the country.

This is not the first time a petition has been held against the notorious “huntress." National Geographic removed her as a contestant from their “Ultimate Survival Alaska” series in 2012.

Bachman's social media pages and website show an array of huge beasts that have died after coming into contact with her. The "Trophy Room" section of her website features a grinning Bachman with dead deer, antelope, alligators, turkeys, and hogs. 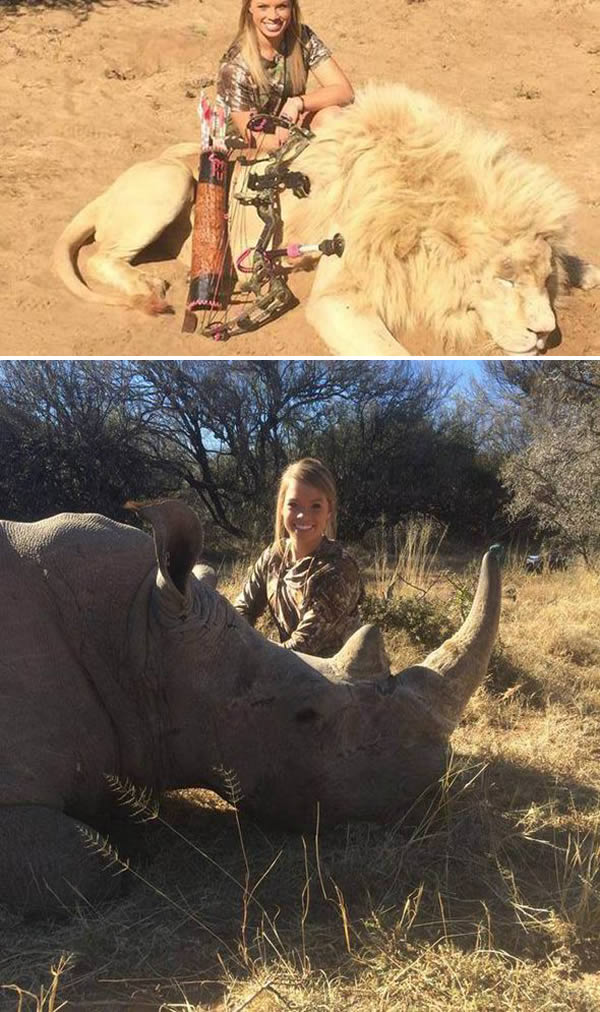 In 2014, a 19-year-old cheerleader sparked outrage by posting pictures of wild creatures she has hunted and killed in Africa while posing cheerfully next to them. Tens of thousands of people have signed a petition demanding that Facebook remove the photos taken by U.S. hunter Kendall Jones.

In one image, the Texas Tech University student poses next to the body of an antelope while sporting a beaming smile on her face. She shared the picture on her page, which has more than 250,000 "likes," along with the caption: "Another harvest for today. White Springbok, it's one of the four-color (sic) shades of this animal! And let me tell you it's one of my favorite (sic) kinds of meat so far!" Other pictures show her looking cheerful alongside lions, leopards and elephants she killed in the wild.

The photos have sparked outrage among animal rights activists with two separate petitions calling for removal the images. Just under 175,000 people signed a petition on AVAAZ.org while another on Change.org had over 9,000 signatures.

4The American dentist who butchered Africa's most famous lion, Cecil 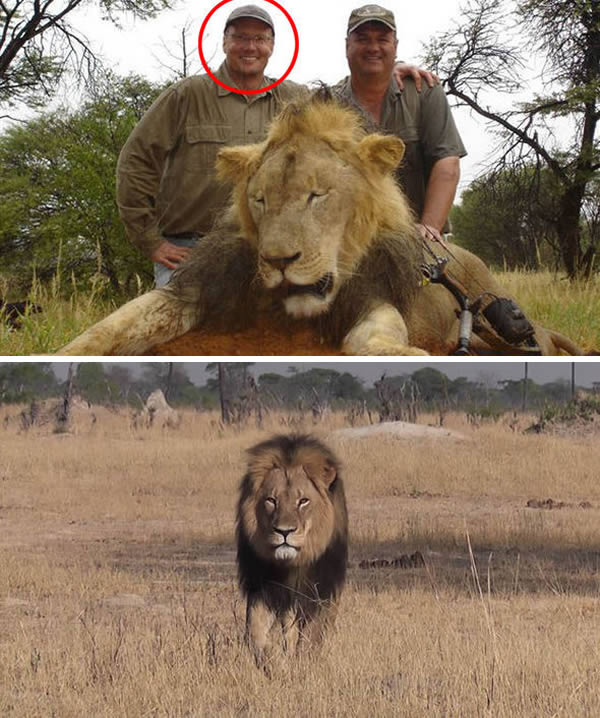 In July 2015, Cecil the lion was slaughtered by prolific animal killer Walter Palmer, who has bragged online about his twisted hunting exploits. The middle-aged dentist from Minnesota also posed for a series of "trophy" images with the bodies of the magnificent beasts he has killed.

Palmer shot the huge lion with a bow and arrow while hunting in Zimbabwe, mortally wounding him. Authorities believe that trackers who organized the American's hunt later found critically wounded Cecil and shot him dead with a rifle, before beheading and skinning him. They also tried to destroy his GPS tracking tag. The world-famous lion's corpse was then dumped in a secluded spot in a senselessly barbaric act which has shocked animal lovers across the planet.

In a statement, Palmer — who is now wanted by Zimbabwean police — maintained he believed the hunt he was on was legal. He said, "I had no idea that the lion I took was a known, local favorite, was collared and part of a study until the end of the hunt. I deeply regret that my pursuit of an activity I love and practice responsibly and legally resulted in the taking of this lion."

Cecil was one of the world's most recognizable felines because of his rare black mane. He was the star attraction for thousands of tourists who travel to the Hwange National Park in Zimbabwe every year. 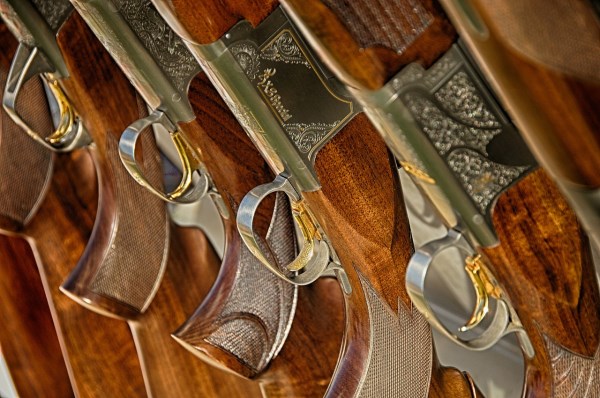 This picture of hunters posing next to a dead fox and her seven cubs sparked outrage after it was posted online in November 2014. In the photo, three men who were hunting near the village of Lysovice in the Czech Republic are seen smiling for the camera. The bodies of the mother fox and her seven cubs lie arranged in a line at their feet. The hunters posted the photo to a blog called Hunters Must Be Crazy.

The photo went viral after it was shared by the British-based charity One World Wildlife, with viewers branding the men as "evil" and "cruel." A spokesperson for the Czech Hunting Association said, "The red fox isn't a protected species, but I agree it isn't very humane to put pictures of hunted animals on social networks."

In 2014, a group of New Zealand rugby players were under fire for posting photos of themselves with dead animals after a hunting trip in South Africa. Crusaders Tom Taylor, George Whitelock, Sam Whitelock, Ben Funnell, and Tyler Bleyendaal are pictured with various dead animals. Once the pictures started to spread online, they were met with intense criticism.

The photos were originally posted on the Facebook page for the Landmark Foundation, an environmental organization that, as Director Dr. Bool Smuts notes, is “against the whole concept of trophy hunting. 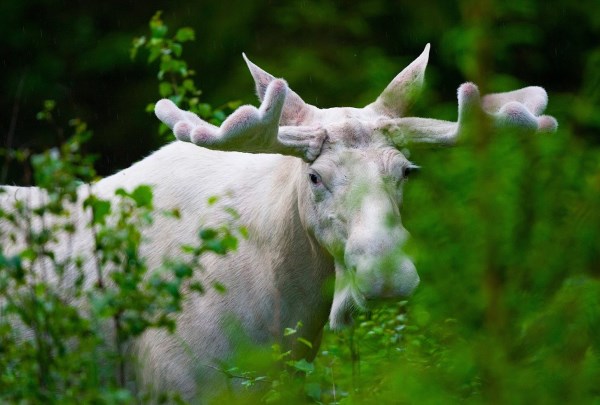 In 2013, three hunters were trying to make amends after they killed a rare albino moose considered sacred by the indigenous Mi'kmaq people. The hunters, who have not been named, shot the animal in the Cape Breton Highlands of Nova Scotia, Canada during a recent trip to the area. They claim they did not realize that their trophy would spark outrage among the Mi'kmaq, who believe albino creatures to be "spirit" animals.

Their calamitous error was spotted by Jim Hnatiuks when the trio brought the carcass of the dead animal into his hunting and taxidermy store in Lantz for it to be mounted. Hnatiuks insists the hunters were unaware of the implications of killing the rare Spirit Moose. They later returned the hide so the Mi'kmaq could perform a sacred ceremony. 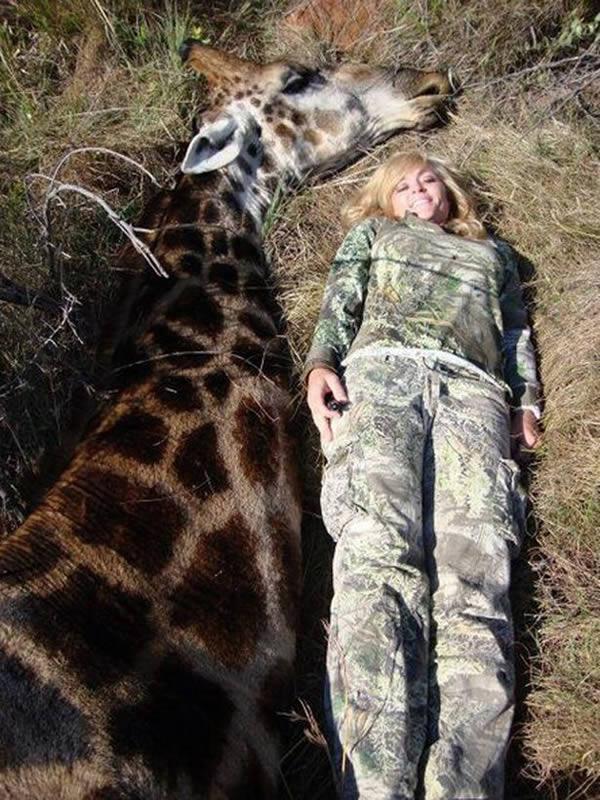 A self-styled hunting queen who posts pictures of herself next to animals she's killed has received death threats after posing for a picture while lying next to a dying giraffe.

Rebecca Francis has a website and blogs in which she details her passion for hunting across Africa and America. But animal rights campaigners lashed out after the picture above was shared on Twitter by comedian Ricky Gervais. The Office star wrote, "What must've happened to you in your life to make you want to kill a beautiful animal & then lie next to it smiling?"

Supporters backed the outrage with a series of brutal tweets aimed at the mother of eight. Francis, from Utah, also has a television series, Eye of the Hunter, and says, "We hunt elk and deer every year without fail, even through pregnancy, and nursing babies." 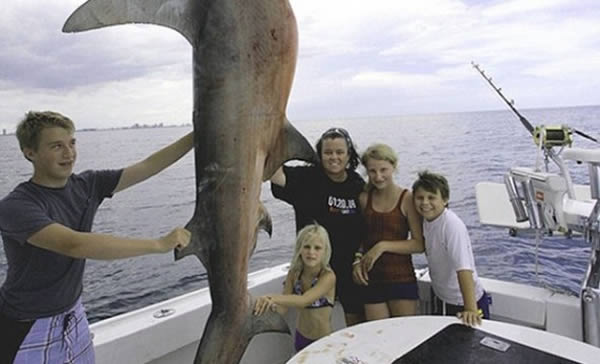 Sharks are in trouble. Approximately 73 million are killed each year, and as a top predator of the sea they are vital to the ocean ecosystem. While some celebrities, including Leonardo DiCaprio and January Jones, have joined conservationists in the fight for their survival, Rosie O'Donnell doesn't seem too worried.

In 2012, photos of O'Donnell posing with dead and bloody sharks hit the web and sparked outrage. According to The Sun Sentinel, Rosie and family went on several fishing expeditions with Mark “The Shark” Quartiano over the past few years off the coast of southern Florida. Quartiano recently posted a photo of O'Donnell and her kids with a dead hammerhead shark hanging on his boat. The response was quick and angry, with comments posted to O'Donnell's Facebook and Twitter accounts.

Conservation organizations have responded as well, among them the Australian Anti-Shark Finning Alliance, Planet Ocean Alliance, and Shark Savers. While they say that O'Donnell's fishing trips were legal, she is sending the wrong message. “Right now sharks are the most endangered animals around. This is basically an endorsement. It sends the message that it's an OK activity. And this is not an activity that we want celebrities endorsing,” said marine conservationist Erik Brush. 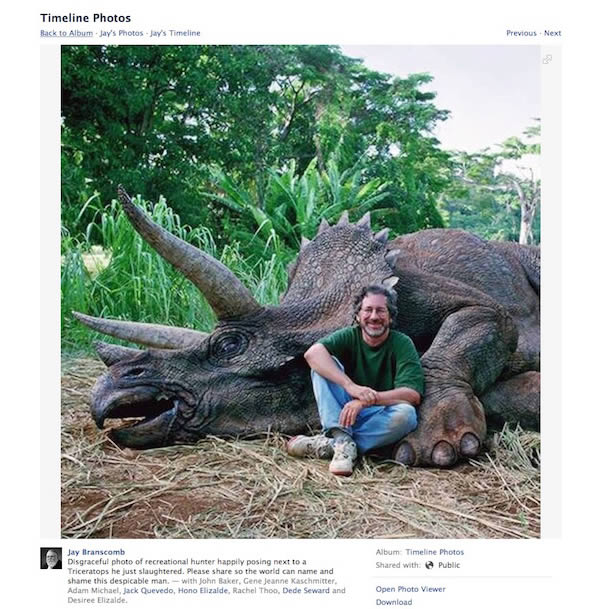 Even though protecting animals is a noble cause, some Facebook haters will complain about almost anything and occasionally make you lose all hope in humankind. We may be the most intelligent of all creatures, but just because our brains are the most developed of any mammal doesn't mean we all use them. Case in point is the hilarity surrounding the image above.

If you're a movie nerd, you probably already know that the above photograph is a BTS photo of noted director Steven Spielberg on the set of Jurassic Park with a Triceratops prop. Nothing out of the ordinary for a director to pose with, right?

Normally, no, but with the help of a sarcastic post from Internet humorist Jay Branscomb and the knee-jerk reactive nature of the Internet, it was a tragedy.

Branscomb posted the above photograph on his Facebook page with the facetious caption, “Disgraceful photo of recreational hunter happily posing next to a Triceratops he just slaughtered. Please share so the world can name and shame this despicable man.”

Presumably intending only to get a few laughs out of people, Branscomb got much more than he bargained for. Rather than laughing and picking up on the sarcasm in the post, certain individuals started ripping into this nameless man who was ruthless enough to hunt down such a beautiful creature.

We wish we were kidding, but we're not. Some people did indeed seem to think this was a real triceratops. Here's just one comment:

I think zoos are the best way to keep these innocent animals safe… a**holes like this piece of s*** are going into these beautiful animals HOME [sic] and killing them… it's no different than someone coming into your home and murdering you… that's what's so selfish about ppl that hunt they're uneducated and their way of thinking is wellll these animals are overpopulating and are going to die anyway… WELL HUMAN BEINGS are overpopulating and GUESS WHAT if we were to kill an innocent human being and used that as an excuse we'd be in prison… I think it's time to say the same about animal rights.