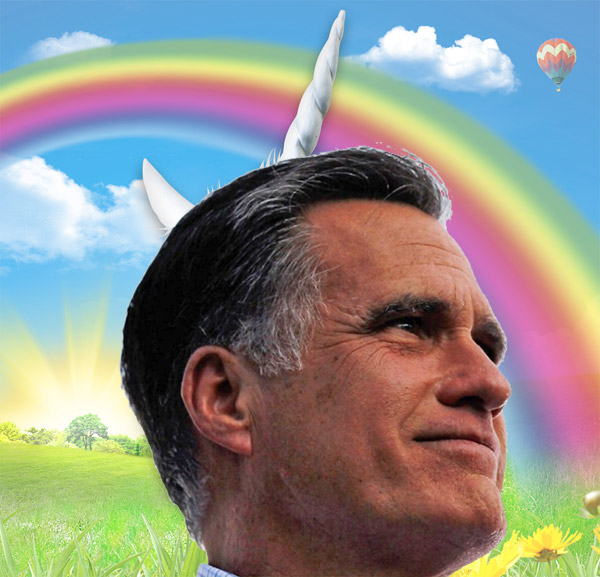 "Mitt Romney's DNA has never been compared with a unicorn's," political activist John Hlinko explained. "We can't rule out the fact that he is a unicorn."

Hlinko started the petition in 2012 as a lampoon of “birthers,” people who believe U.S. President Barack Obama was not born in the United States. "The theory (that Obama was born in Kenya) has been debunked time and time and time again. Logic is apparently useless with these people. We thought we'd take our argument to the same illogical extreme," said Hlinko.

Citing a need for increased “space superiority” and job creation, a petition was posted on the White House's website demanding that the United States government secure funds and resources to begin construction of a "Death Star" by 2016.

The "Death Star" is a fictional spacecraft and galactic superweapon from Star Wars. It is capable of destroying an entire planet with its powerful super laser.

While a proposal to increase the budget of NASA received just 3,964 votes, over 34,000 signed this petition, making it one of the most popular on the White House's website.

After a while, the petition received an official response from the Obama administration. Spokesman Paul Shawcross posted: "The Administration shares your desire for job creation and a strong national defense, but a Death Star isn't on the horizon. Here are a few reasons: 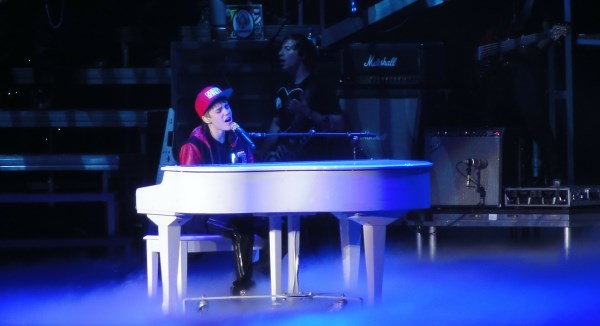 In 2014, deporting Justin Bieber became one of the most popular petitions in the history of President Obama's online petition program, tapping a depth of anger at the Canadian pop singer's destructive path and forcing the White House to answer.

The petition read: "We the people of the United States feel that we are wrongly represented in the world of pop culture. We would like to see the dangerous, reckless, destructive, and drug abusing Justin Bieber deported, and his green card revoked. He is not only threatening the safety of our people, but he is also a terrible influence on our nation's youth."

Since the Obama administration agreed to address to any petition that reaches 100,000 signatures, no matter how dumb, it had to respond. It did so with a simple "Sorry to disappoint, but we won't be commenting on this one." Then it changed the subject to Immigration Reform. 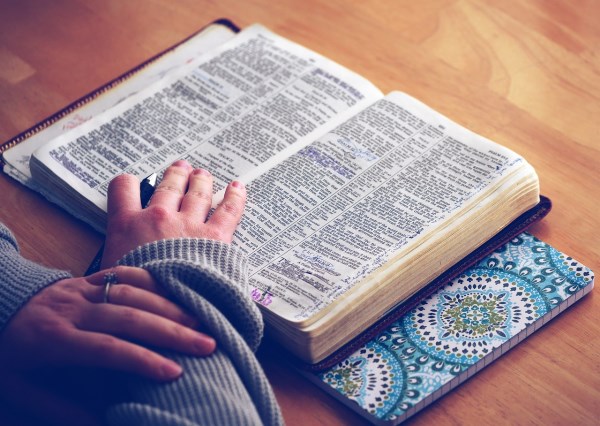 In an obvious parody of arguments in favor of banning video games, the petition posted on Change.org claims the Bible "encourages readers to murder women for entertainment" by "commit(ting) sexual violence against women, then abuse or kill them to proceed or get 'god' points." It calls on Australian retailers, including Target, to pull the Bible from their shelves. 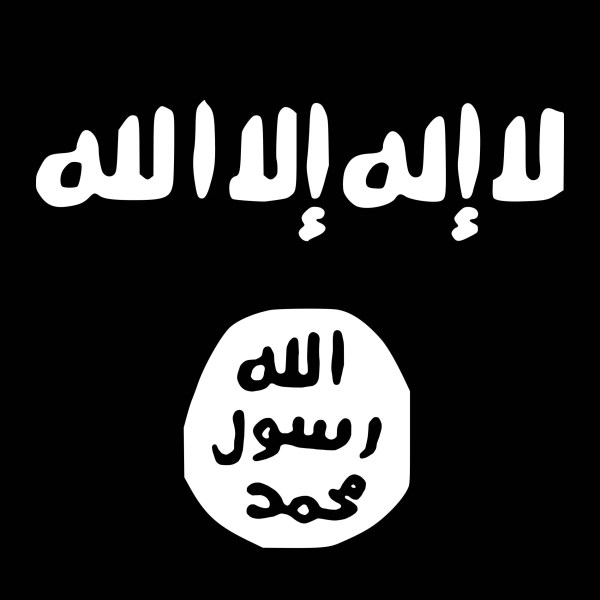 "If I change my name, the terrorists win," said Isis Martinez, a 38-year-old Miami resident, who started a petition in 2014 asking the media to stop using the acronym ISIS when referring to the Islamic State.

Named after her mother, Isis has grown frustrated by all the negative reactions her name has elicited. Adding to her frustration is the fact that the acronym isn't factually correct: it's actually ISIL (Islamic State of Iraq and Levant).

Martinez acknowledged the pain and suffering caused by the jihadist group, but said she doesn't think the media should be factually incorrect. “[People named Isis] are collateral damage, and it's unnecessary. All this could go away if they just went with ISIL,” she said.

We just hope there isn't anybody named "Isil." 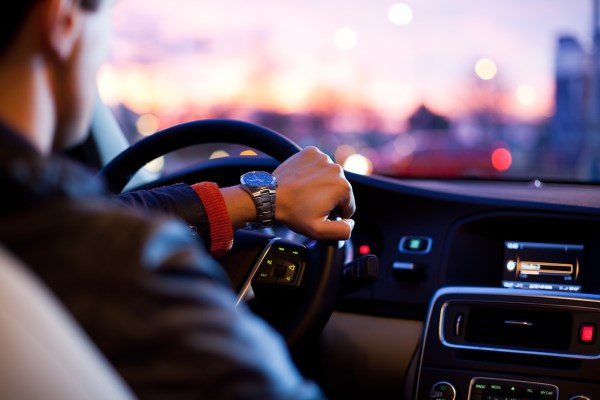 Can you check out girls and drive? Maybe you shouldn't. In 2013, a petition was posted on the White House's website that "If straight men (...) can be distracted by the mere sight of a woman's thigh, then it is a public safety hazard to allow them to operate vehicles."

There are plenty of billboards with sexually suggestive imagery of women, the petition explains, so they demand straight men be prohibited from driving.

The petition only received a bit over 12,000 signatures of the required 100,000 to guarantee a response from the White House, so we'll never know what Obama thinks of it.

742,568 signed a petiton to reunite Alaska to Russia 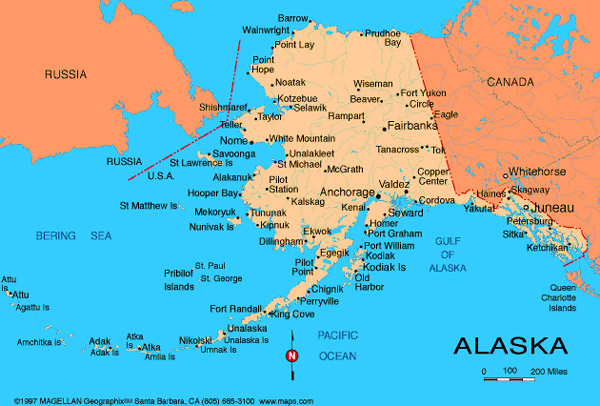 The U.S. purchased Alaska from Russia in 1867 for $7.2 million. Believe or not, there are people that are still unhappy about it.

A petition calling for the secession of Alaska from the United States and its reunification with Russia was posted on the White House's website. It cites the historic travels of Russian explorers to Alaska, as far back as the crossing of native Siberians across the Bering land bridge over 10 thousand years ago.

Since the petition didn't reach the 100,000, the White House was not forced to respond. However, a similar petition in 2012 calling for Texas to secede reached this goal, and the White House responded by saying "our states remain united." 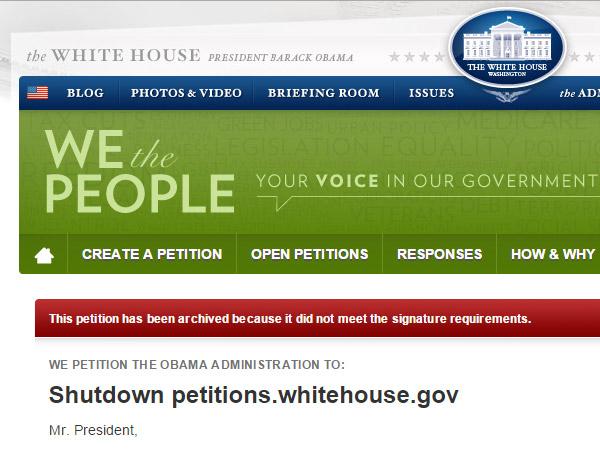 After all we've seen here, is the White House's petition website any good?

A petition was posted on the very website it is trying to kill, saying the site "is littering the internet and provides no real value with an apology to the people of the United States and the world."

The petition went on saying "this is not participation in the political process. This is a way for you to cherry pick a few popular issues and make a statement to get some quick press coverage."

Could there be anything more meta than that? The petition was archived because it did not meet the signature requirements.