Check out 10 incredible houses that all have a distinctly retro vibe. Here's hoping the new owners keep the vintage charm of these places intact.

1The cold war era house with a 15,000 square foot bomb shelter underneath 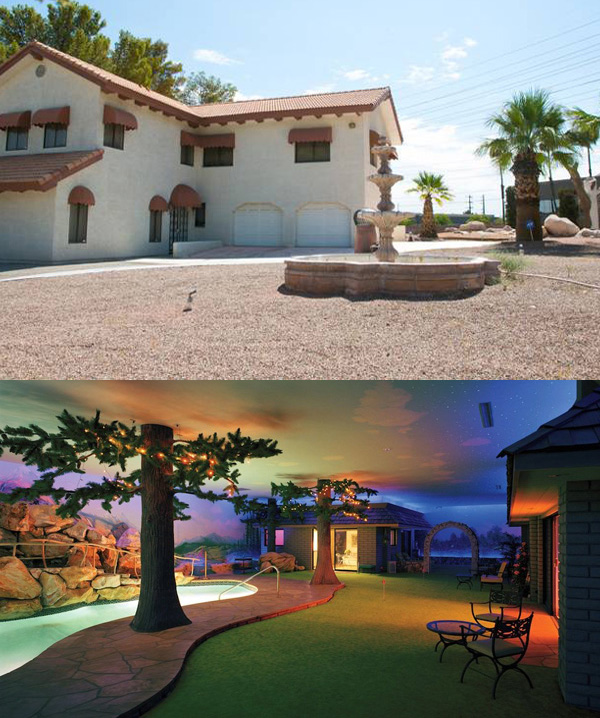 From the street, this house in Las Vegas looks like any other, except with a few extra ventilation and air conditioning units planted in the yard. However, if you look closer you'll see an entrance to an elevator camouflaged by clusters of rocks.

The elevator leads to a underground lair built by wealthy businessman Girard “Jerry” B. Henderson in 1978.

In 1964 at the height of the cold war, Jerry formed his company ”Underground World Homes." Convinced that humanity would one day be destroyed in a hail of nuclear bombs, he built a 15,000 square foot bomb shelter 26 feet underneath his Las Vegas home.

The bunker boasts several bedrooms, three bathrooms, two hot tubs, a swimming pool, a putting green and a dance floor. There is even artificial lighting that simulates the changing light over the course of a day, and murals of idealized landscapes.

Henderson died in 1983 and his wife followed in 1989. The property passed to a distant relative, then was lost to the bank due to foreclosure. It can be yours now for a mere $1.7 million, down from the 2001 price tag of $8 million.

2A home in Toronto boasts the same decor since the 1960s 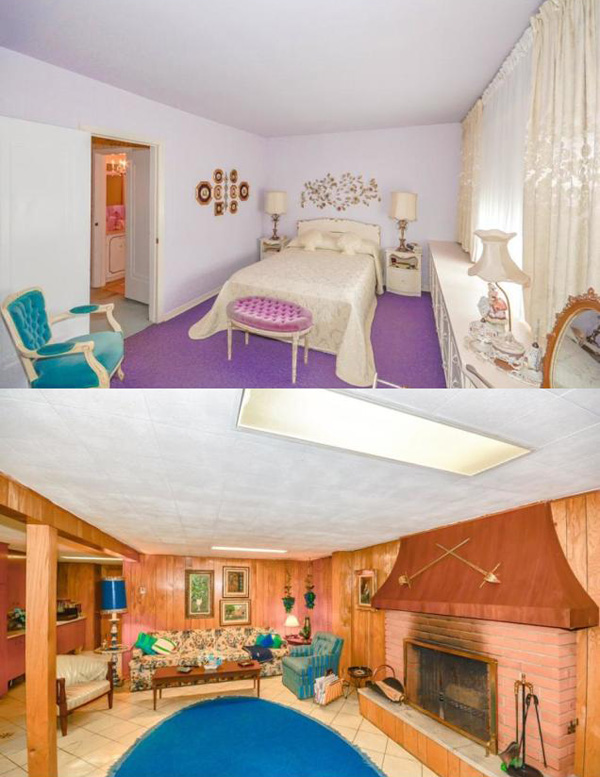 Check out this Mad Men-era house in Toronto.

According to HGTV Canada, the owner is a 96-year-old woman who has lived in the house since 1942 and is now moving into a retirement community. The house was last refurbished in 1965 and hasn't been touched since!

The retro home is currently on the market for $699,000 and all furnishings are included.

3The Middlsex house with an entirely purple interior 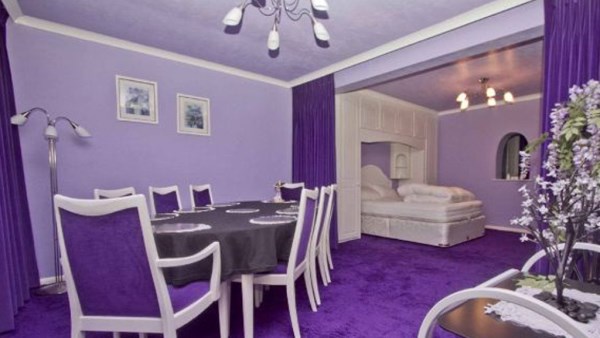 This house in Hillingdon, Middlesex is an '80s extravaganza of purple. Wall-to-wall carpets, walls and furniture are all violet-colored. Even the kitchen and bathrooms were not spared.

This garish house is on the market for £400,000 and – surprisingly – has quite a few interested buyers. 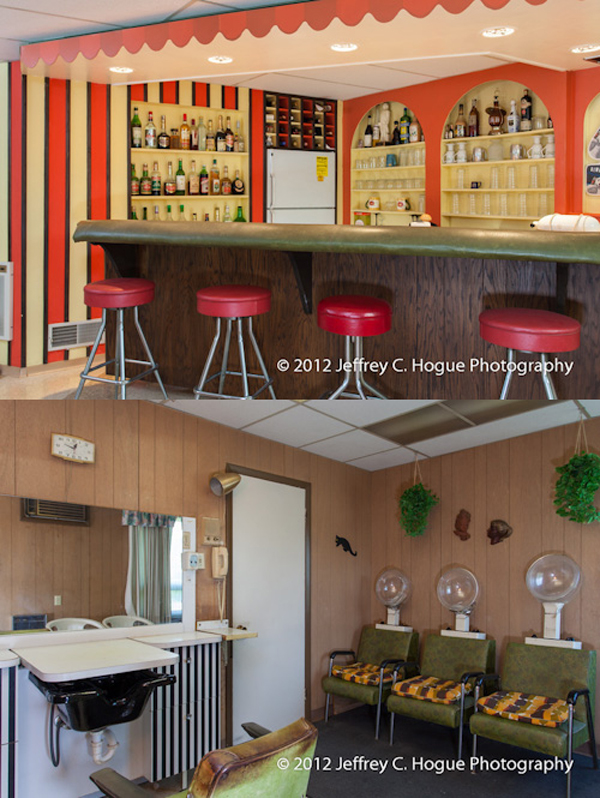 Check out this 1965 time capsule house in Reading, PA which comes with a professional beauty parlor in the basement, an orange, brown and yellow striped bar and a wallpapered kitchen ceiling. It sold in 2012.

According to realtor Jeffrey Hogue, houses like this — retro time capsules with style — usually find appreciative buyers who intended upon keeping the vintage character intact. 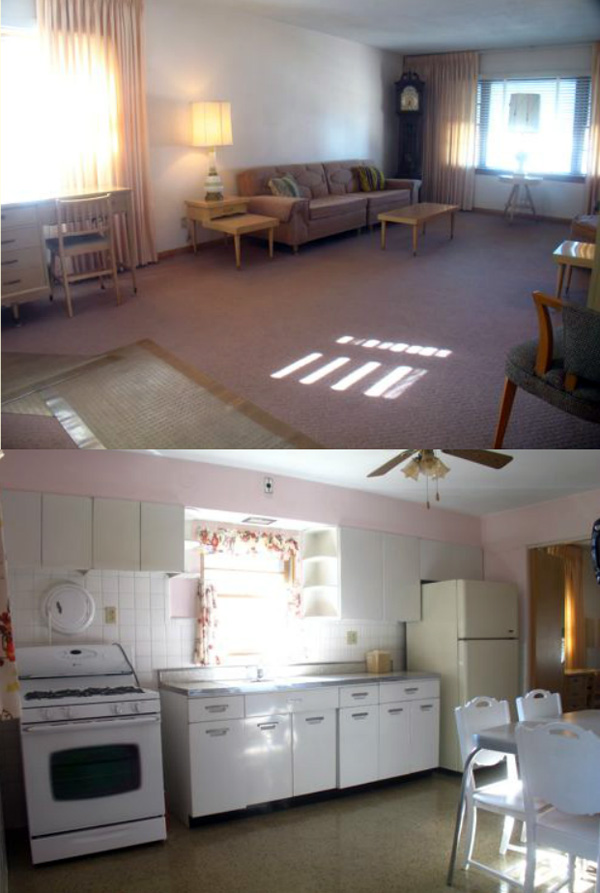 This fabulous '50s two-level bungalow in St. Louis, MO has never been lived in – at least on one level.

The owner of the home resided on the the lower level (basement), leaving the upper level completely frozen in time. The upper level kitchen was only ever used 28 times, over 28 Thankgivings. Everything is in great working order, the original wooden sash windows are in perfect shape, the tile is impeccable and the hardwoods are pristine (and hidden under the wool carpet).

The home was offered for $129,000 with the seller open to negotiating on the vintage furniture inside.

6A Parisian apartment left untouched since 1942 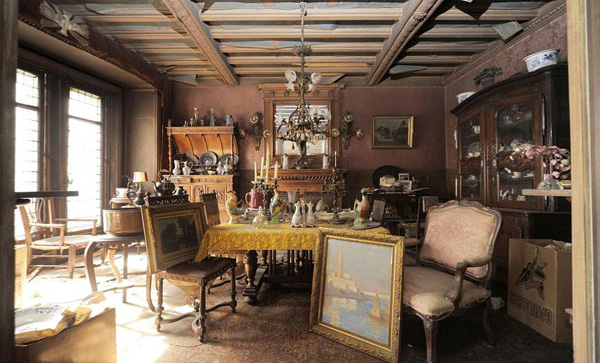 In 1942 at the age of 23, Madame de Florian fled Paris for the south of France as German troops drew near. She never returned, but paid rent on her apartment until her death at age 91.

In 2010, auctioneers opened the doors to the apartment which had been closed off to the outside world for 70 years and discovered the time capsule inside. Despite being covered in dust, the contents were perfectly preserved.

A painting by artist Giovanni Boldini of Madame de Florian's grandmother was sold at auction for €2.1 million. Otherwise, the apartment remains untouched (and undusted) to this day and is now owned by Mme de Florient's estate.

71962 Michigan time capsule features a bowling alley in the basement 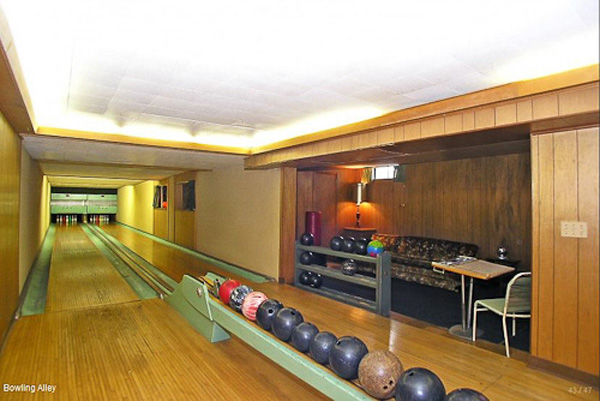 You heard right! The former owner loved to entertain and built the house around the basement room with components from a bowling alley in Lansing, MI that was going out of business.

The house doesn't appear to be altered in any other way – original bathrooms and kitchens (upstairs and down) are all as they were when the house was built. 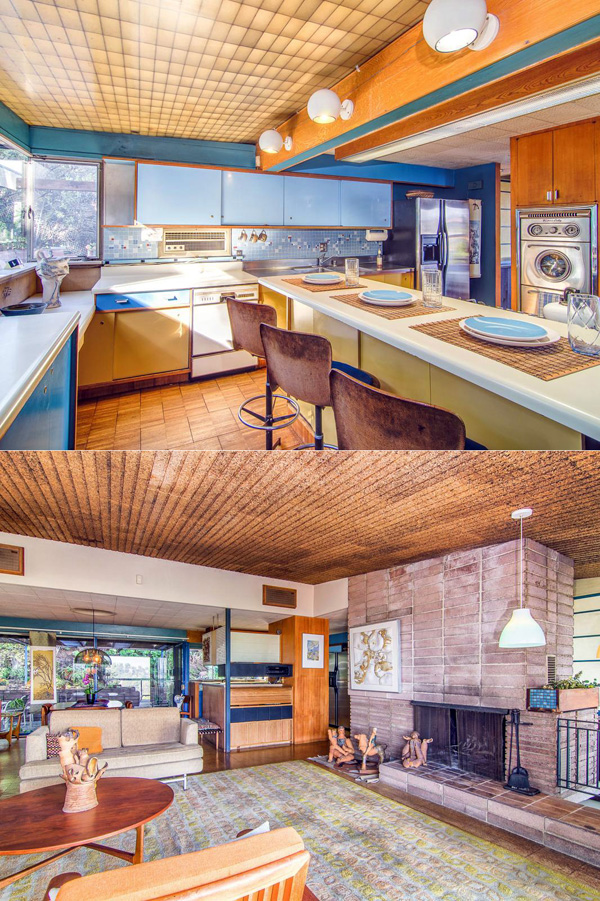 This time capsule home in Los Angeles belonged to Albert P. and Gloria Martin – a commercial architect and an artist – who built it in 1953. The couple lived here for 60 years and designed much of it themselves.

9The San Antonio home that is frozen in the 1970s

If you ever wanted to live like you were part of The Brady Bunch, this home in San Antonio can be yours for $355,000.

Lovingly decorated and maintained, the house has only had one owner since it was built in 1972 and even boasts a vintage rain lamp! 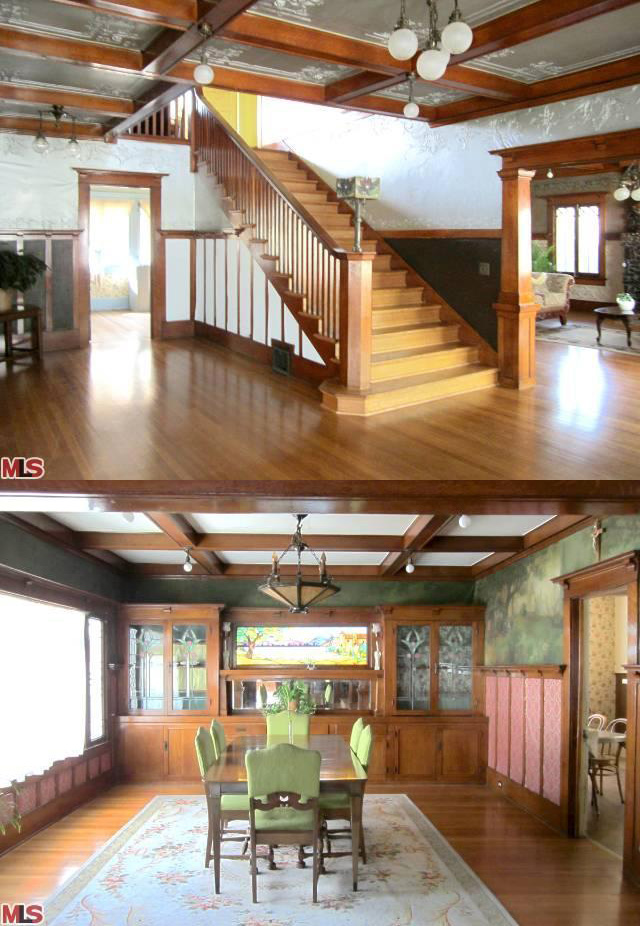 Considered a fixer upper, this rare and intact 1909 Arts & Crafts residence features original light fixtures, oak trim and paneling, beamed ceilings, stained & leaded glass, and murals throughout. It even comes with a turret!

The house was moved to its current site in the 1920s and its exterior was remodeled to the then-popular Mission Revival style. It sold for $700,000 in April 2013.