Weapons used by characters in cartoons and video games tend to look really cool, and diehard fans will do whatever it takes to get their hands on a replica version of their favorite on-screen weapon.

Now, thanks to the dedicated efforts of artists, craftsmen and the occasional weapon master, fans can bring home replicas of their favorite weapons, from cartoons like Thundercats and Adventure Time, and video games like Final Fantasy, The Legend of Zelda and Elder Scrolls: Skyrim. Here are fifteen examples of cartoon and video game weapons brought to life, many of which were forged by master blacksmith Tony Swatton of Man At Arms.

The massive Buster Sword is wielded by the star of Final Fantasy VII Cloud Strife, and it's so big that few thought you could wield such a behemoth with much accuracy in real life. However, replica weapon maker extraordinaire Tony Swatton, a.k.a Man At Arms, not only made a real steel Buster Sword, he started cutting things with it, wielding it like a total boss.

Tony is a big guy, but this sword is as tall as he is and so wide you could use it to part the Red Sea! This is the largest sword Tony and his crew have ever made, but that didn't stop them from taking turns chopping stuff up with this epic scale sword.

2This Shield Is So Shiny! - Legend Of Zelda Hylian Shield 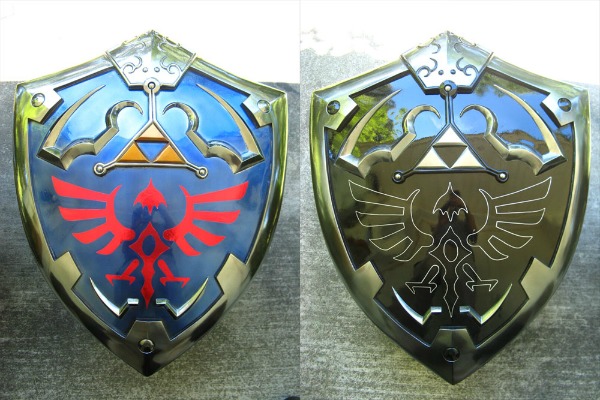 Video game franchises don't come much more classic than The Legend Of Zelda series, and as the graphics improved so did the look of Link's weapons and armor. The Hylian shield from the The Legend Of Zelda game Twilight Princess is described as being “a big, heavy shield like the ones used by knights." Even though this replica made by Aaron from Fiberglass Blades looks heavy, it only weighs five pounds. It was made out of foam filled resin, so it's light enough to carry around all day, yet stands up to a little mock swordplay.

Aaron used automotive paint to make it look like it's made out of steel, and by the look of it, any Link cosplayer would give all the gold in Hyrule to possess such a great looking shield! 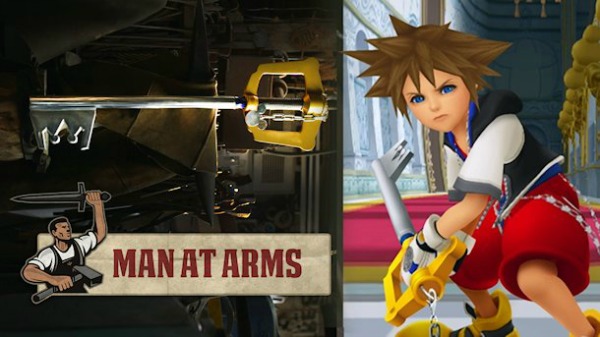 Disney cartoons and the Final Fantasy video game franchise collide in the Kingdom Hearts series, where Square Enix style characters meet dark and deadly versions of Mickey Mouse, Goofy and other popular Disney characters in a realm under attack by the Heartless.

The main character Sora wears Mickey Mouse style red shorts and cartoony shoes, and carries a very iconic blade shaped like a key. The Keyblade was brought to life by Man At Arms, and looks exactly like the original, but Tony gave it something that the Keyblade in the game doesn't have – sharp edges. Now, even though it looks like something out of a cartoon, it can chop through wood – and bad guys –  like a champ.

4Pretend To Open Doors To Another Dimension - Aperture Portal Gun 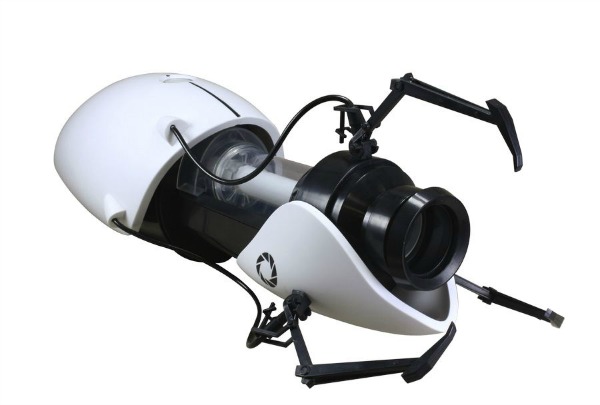 The Portal video game franchise bends the rules of time and space with spaced out gameplay that tasks the player with completing puzzles and overcoming obstacles by opening portals using the Aperture Science Handheld Portal Device, or a Portal Gun for short.

NECA made the dreams of Portal fans come true in 2012 by releasing an extremely high quality replica of the Portal Gun, complete with portal creating sound effect and LED light up detail, and this limited edition masterpiece is sure to go down in history as one of the finest video game replica weapons ever made. 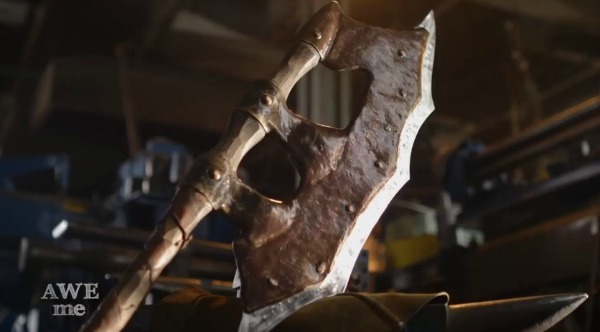 The Elder Scrolls: Skyrim is one of the most popular fantasy themed video games of all time, not only because of the amazing graphics and incredibly exciting gameplay, but also because of the dark fantasy setting which is full of orcs, dragons and giants, among the other creatures that go bump in the night.

Man At Arms decided to construct a brutish weapon big and badass enough to satisfy an Orc's crude sense of style – the Orcish Battleaxe. Tony paid attention to all the little details that make it look like it was made by an Orc, including the use of leather strips and a buffalo knuckle, but he also made sure to keep it functional, and it chops through bone and wood like nobody's business. 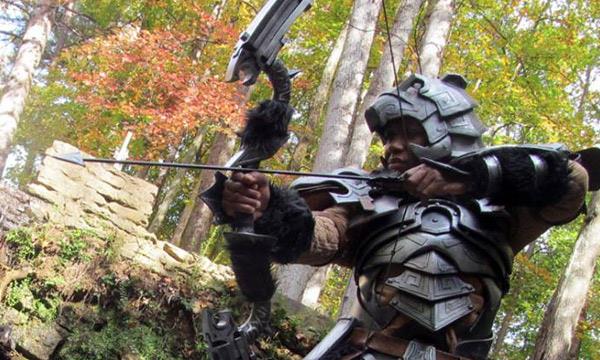 Gamers who play through The Elder Scrolls: Skyrim tend to walk one of two paths in terms of weaponry – blade or bow. Those who choose the bow know that they don't come much cooler looking, or more powerful, than the Nord Bow – a fierce tribal weapon capable of dealing heavy damage at long range.

While this replica created by Lee Camara from Fev Studios may not be quite as sturdy as a real bow, it can still take out a kneecap from twenty yards away and looks fit for use by a fierce Dragonborn in training.

7Thundercats Ho! - The Sword Of Omens 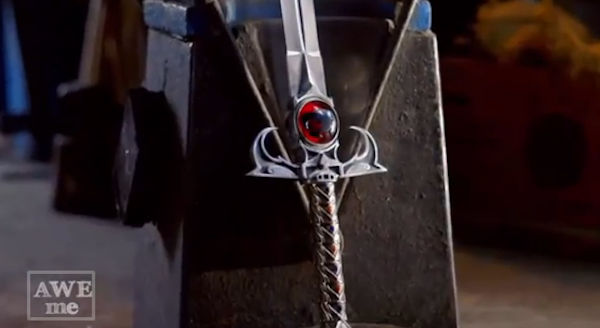 The Sword of Omens is one of the coolest looking swords in cartoon history, and even kids who didn't grow up in the 80s can appreciate the purr-fect style of this powerful weapon. It's one of the most requested sword builds, so Tony put his all into making this magnificent magic blade.

The Man At Arms version doesn't grow in size or feature a glowing emblem like the original, but it slices and dices with the greatest of ease thanks to Tony's master craftsmanship.

All the little details Tony added to the sword, from the cast metal grip to the superbly styled cross-guard and hand polished glass emblem, make his version look even cooler and deadlier than the cartoon original. 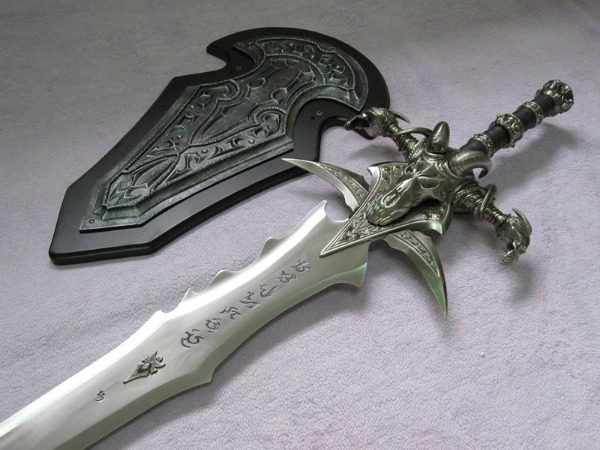 The massively multiplayer online game World of Warcraft has over 7 million players who are devoted to battling for their guild, and questing their way to glory.

Players have been asking for replica weapons and artifacts from the Warcraft universe for years, so Blizzard agreed to their demands and hired Epic Weapons to create a high quality replica of the Frostmourne Blade.

Using high quality cast metal details, a stainless steel blade and a microchip embedded in the hilt to prove its authenticity, the Frostmourne Blade is one piece of epic loot every gamer is dying to get their hands on.

9A Sword Worthy Of The God Of War - Kratos Blade

A blade befitting the God Of War Kratost must be fierce looking, sharp enough to cleave through stone and large enough to lop the limbs off of a wicked Titan. However, making a blade this stylish, all while ensuring that it's still very functional, calls for a master blacksmith like Man At Arms. With deadly precision he not only forged a blade which can be sharpened, he created a replica so close to the look of the original Kratos himself would have been proud to carry this blade. 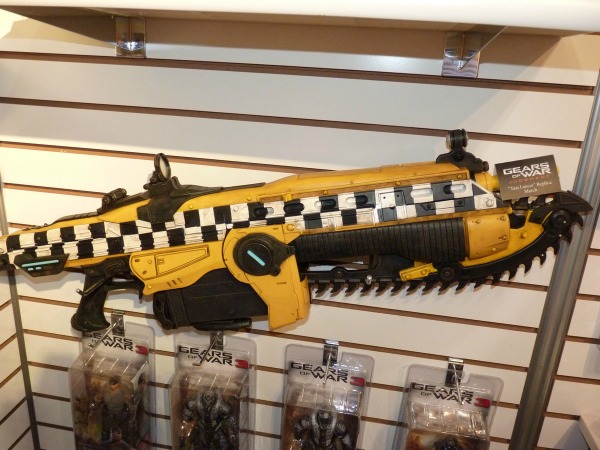 In the Gears of War video game franchise the enhanced warriors known as COGs battle the nasty alien Locust hordes using particularly awesome assault rifles called Lancers. The standard variety features a bayonet blade attached to the front, the souped up version features a chainsaw, and it always looks like more rifle than most people could handle carrying into battle, let alone fire at the enemy.

The amazing looking replicas built by NECA are made to be carried around, and they make any gamer or cosplayer look like a serious Locust slaying badass. So far NECA has released two versions of the Lancer– the Retro Lancer, with the bayonet up front available in pink, blue and gold, and the Chainsaw Lancer, which is available in regular gunmetal and yellow and black checkered taxi cab colors. They even feature a motorized chainsaw sound and vibration when you add batteries, completing the transformation from mere gamer to sci-fi super soldier.

An assassin's ideal weapon is easily concealed yet deadly enough to get the job done, and is preferably able to be concealed in a sleeve or pocket.

The Hidden Blade used with deadly accuracy by the main character in the Assassin's Creed video game franchise features a spring loaded blade concealed in a bracer, which can be popped out as needed for silent kills.

NECA had already released a plastic replica when Man At Arms decided to make the real life version, so Tony took the replica version and reverse engineered it to see how it worked, and came up with an understated yet totally functional version that's deadly cool in both form and function. Tony also made the Pirate's Cutlass featured in Assassin's Creed 4: Black Flag to go along with the Hidden Blade, just in case he needed to chop his way through a deck full of scallywags, and boy do they make a sharp looking set! 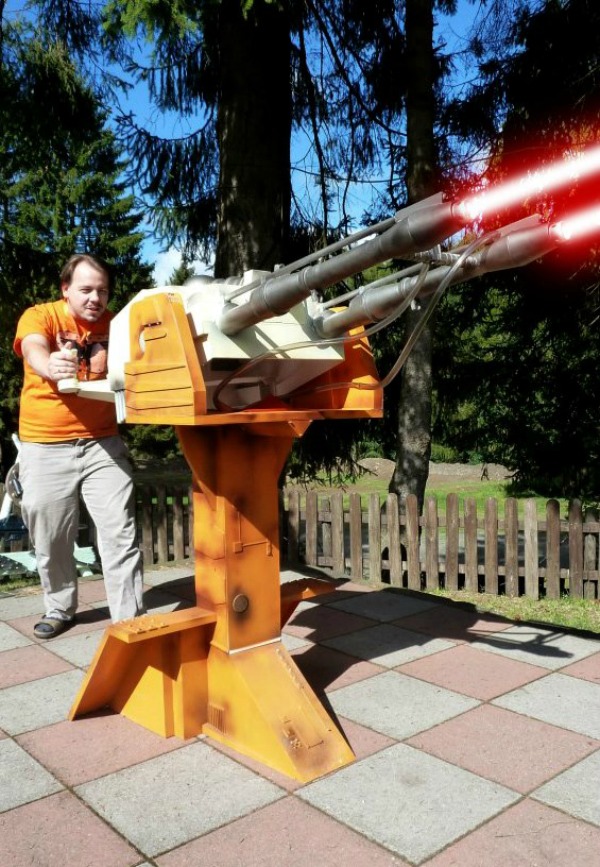 Craftsman DJ Force, a member of HeMan.Org, got tired of building normal sized weapons for his replica company Weapons Forge, so he decided to try his hand at building something massive. He built a life sized replica of the Castle Grayskull Cannon, which swivels up and down and features light up effects to sell the realism. He debuted this Cannon at Grayskull Con 2012, and every He-Man fan in attendance went crazy for this wicked looking cannon, hoping to commission one for their own castle.

Anime characters love to carry around oversized weapons too big for the average human to wield effectively, and Ichigo Kurosaki from the hit series BLEACH is no different. He carries an oversized Zangetsu sword that could easily cleave a person in half, a deadly and efficient weapon that helps him with his dark work as a Soul Reaper.

The Zangetsu sword is the second largest sword ever made by Tony Swatton, only slightly smaller than the Buster sword, and he tried to preserve certain Japanese sword making traditions while making this deceptively simple blade. Then Tony and his crew prove once again that no sword is too big for these weapon building warriors, as they chop through watermelons and pottery with ease.

The MA37 is used by Spartan supersoldiers to battle the Covenant, an alliance of alien races hell bent on the destruction of the human race, and even though this replica created by RPF member Lost Viking doesn't fire live ammo it looks intimidating and exactly like it does in Halo: Reach.

Lost Viking cleverly created this realistic replica out of plywood and poplar boards, using a blueprint he found online and woodworking tools like a router, scroll saw and drill press to construct the gun to exact specifications layer by layer. He then hand painted the whole thing, adding lots of weathered detail so it actually looks like it's been used in combat against alien hordes. The whole thing took him 3 months to build, a small price to pay for such a great looking replica.

15Get Mathematical! - Finn's Golden Sword Of Battle From Adventure Time

Adventure Time is one of the most popular cartoon shows on television today, in part because every episode features a new fantasy journey for Finn and his stretchy dog pal Jake to go on, and tons of colorful characters for them both to meet.

Finn's weapon of choice is a golden sword he calls Scarlet, and even though it's all chipped and banged up it makes a powerful impression on the bad guy when Finn starts swinging! The Man At Arms version of the Golden sword is tempered until it achieves that signature golden color, the guard and pommel are treated with a chemical that causes the steel to oxidize and turn black, and after a few chips and scratches are added Finn's Golden sword is ready to chop some monsters in two!