If you have a pet, then chances are you've talked to them more than once, probably like they were actually a person. But of course animals can't talk back – or can they? Here's a list of ten beasties, from huge elephants to small breed dogs, who might have something to say about that.

Koshik is an Asian elephant with a special talent; He can talk. Well, a little, because Koshik has a small but impressive vocabulary of Korean. Knowing only five words, "annyong" ("hello"), "anja" ("sit down"), "aniya" ("no"), "nuo" ("lie down") and "choah" ("good"), Koshik doesn't seem to understand what he's saying, but the ability to mimic the words at all is absolutely unprecedented. Koshik lives outside of Yongin in South Korea in the Everland Zoo. His trainers claim that he learned to imitate human words in 2004, and they attribute it to close contact with humans throughout his lifetime.

In 1984, around the age of 9, NOC said his first words. For a human, this might have been worrisome, since that's a little old to finally start talking, but NOC was a beluga whale. Captured as a juvenile in 1977, NOC learned to mimic the speech of his human handlers and companions fairly early in life. Although the mimicry suddenly stopped when he reached sexual maturity four years later, the fact that it happened at all is undeniably amazing.

Bought when he was one year old, Alex was an African Gray Parrot and the subject of a major scientific study spanning over thirty years. His owner, Irene Pepperberg, was an animal psychologist at the University of Arizona (and eventually elsewhere), who was studying language in relation to animals. In fact, Alex's name itself was an acronym for Pepperberg's “Animal Learning Experiment.” By the time of his death in 2007, Alex could recognize more than fifty objects, had a vocabulary of over 100 words, and was touted as having the intelligence of a four-year-old human. Before his death, his last words to Pepperberg were “You be good.”

Found by George and Alice Swallow in 1971, Hoover the seal was just a baby when he was taken in by his human parents. After earning his name by eating at the pace of a vacuum cleaner and outgrowing his tub, Hoover began to live in the pond outside his adoptive parents' home. Here, he learned how to speak and imitate voices, including a thick New England Accent. Eventually, he was moved to the New England Aquarium, where he entertained onlookers, crying, “Well hello there!” and “Get outta here!” until his death in 1985.

Not to be confused with Garfield the cat's brain-dead roommate, this canine named Odie was anything but stupid. Although his vocabulary only included three words, that was more than enough to capture the hearts and attention of the United States. He was featured on Late Night with David Letterman and The Oprah Winfrey Show, cheerfully bellowing out “I love you!” to his owner, Ruth.

An African Grey Parrot similar to Alex, N'kisi has a much more extensive vocabulary and understanding of the world around him. With a growing vocabulary of 950 words and the ability to use them in context, frequently in complete sentences, N'kisi is a stunning example of how little we really know about animals. N'kisi has been reported to have an understanding of verb forms, saying, “flied” when he hasn't been taught the past-tense of “fly,” and even inventing new terms to describe things that he hadn't been taught. In a story told by Jane Goodall, after seeing a photo of the acclaimed primatologist, N'kisi had the opportunity to meet her in person, whereupon he looked at her and asked, "Got a chimp?"

Although there was no scientific study involving Blackie, much less a thriving Internet fan community, he is nonetheless one of the most important talking animals in the world. Trained to say, “I love you” and “I want my mama,” Blackie made paid appearances on local TV and radio programs throughout the late 1970s. However, when the show eventually wound up on the street corner, like a guitarist looking to make it big in Nashville, the owners were notified that they would need to get a business license in order to keep up Blackie's street show. The resulting court case was both ridiculous and hilarious, touching on the issue of a cat's right to the freedom of speech—really—versus a person's right to profit from it.

Most Siberian Huskies have been known to “talk,” using long whining and warbling noises in place of the more familiar bark, but that's no reason to assume that they can actually hold a conversation—unless we're talking about Mishka, of course. Internet sensation Mishka the Talking Husky does just that, with a growing vocabulary, including such key phrases as “hello,” “I love you,” and “I'm hungry.” If your dog could talk, do you think he would say much more? 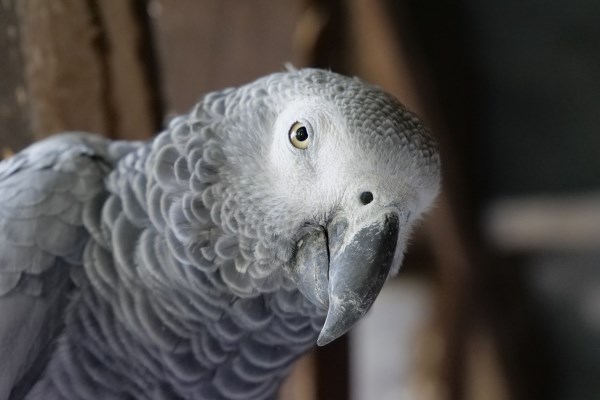 A permanent resident of the Knoxville Zoo in Tennessee, Einstein is eighteen years old and has a vocabulary of about 200 words, about 70 on cue, and a definite personality. When asked what she would do if given a peanut, her response is to bob her head and chirrup, “Oh my god! Oh my god!” over and over in excitement. An African Grey Parrot similar to Alex and N'Kisi, Einstein is the third in the set that proves this may be the most intelligent bird species on record.

Lucy Temerlin had a preference for gin, and would happily put on tea when her tutor came to visit. This would be perfectly normal except for the fact that Lucy was a chimp. Owned by the Institute for Primate Studies in Oklahoma and raised by Maurice Temerlin, a university professor and psychotherapist, Lucy Temerlin was a controversial experiment in blurring the lines between human and animal. Her story is documented in Temerlin's novel “Growing up Human: A Chimpanzee Daughter in a Psychotherapist's Family.” Brought up like a human, Temerlin and his wife taught Lucy to eat with silverware, sit at the dinner table, and even dress herself. To help her communicate, primatologist Roger Fouts taught her rudimentary sign language. She eventually learned more than 140 words, which she used regularly. Although she never spoke aloud, she was one of the first apes to use sign language with any air of fluency, and one of the few “speaking” animals who obviously understood what she was saying.