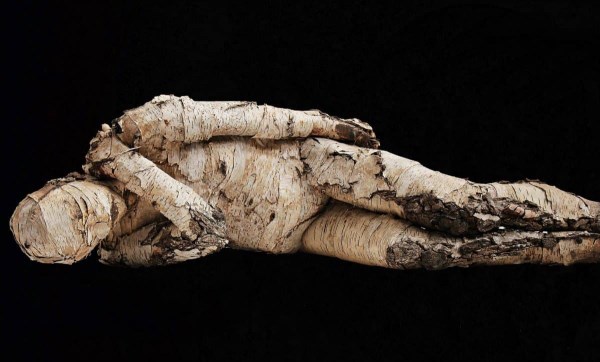 These incredible pictures show a 700-year-old mummy in excellent condition, which road workers discovered by chance in eastern China. The corpse of the high-ranking woman is believed to be from the Ming Dynasty, the ruling power in China between 1368 and 1644. It was stumbled upon by a construction team that was looking to expand a street.

The mummy, which was found in the city of Taizhou in the Jiangsu Province along with two other wooden tombs, offers a fascinating insight into life as it was back then. Discovered two meters below the road surface, the woman's features - from her head to her shoes - have retained their original condition and have hardly deteriorated.

When the discovery was made by the road workers in 2011, Chinese archaeologists from the nearby Museum of Taizhou were called in to excavate the area. They were surprised by the remarkably good condition of the woman's skin, hair, eyelashes, and face. It was as though she had only recently died. 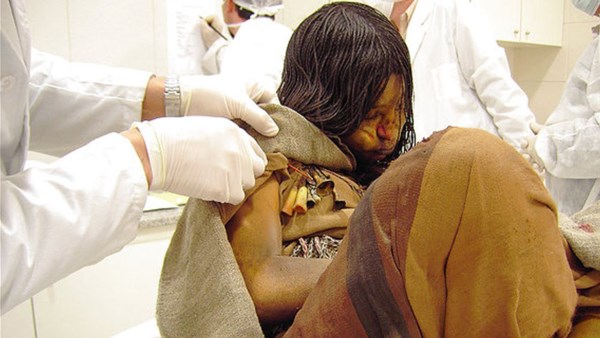 The maiden, the boy, and the girl of lightning were three Inca children entombed on a bleak and frigid mountaintop 500 years ago as a religious sacrifice. Unearthed in 1999 from the 22,000-foot summit of Mount Llullaillaco, a volcano near the Chilean border, their frozen bodies were among the best preserved mummies ever found, with internal organs intact, blood still present in the heart and lungs, and skin and facial features mostly unscathed. No special effort had been made to preserve them. The cold and the dry, thin air did all the work. They froze to death as they slept, and 500 years later they still looked like sleeping children, not mummies.

The children were sacrificed as part of a religious ritual known as Capacocha. They walked hundreds of miles to and from ceremonies in Cuzco and were then taken to the summit of Llullaillaco (yoo-yeye-YAH-co), given chicha (maize beer), and, once they were asleep, placed in underground niches where they froze to death. Only beautiful, healthy, physically perfect children were sacrificed, and it was an honor to be chosen. According to Incan beliefs, the children did not die, but joined their ancestors and watched over their villages from the mountaintops like angels. 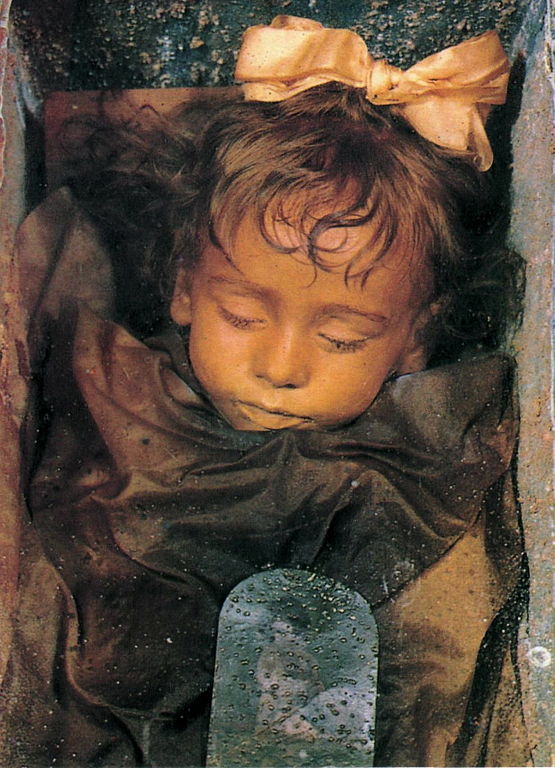 Rosalia Lombardo (1918 – 1920) was an Italian child who died of influenza. Rosalia's father, General Lombardo, was sorely grieved about her death, so he approached Alfredo Salafia, a noted embalmer, to preserve her. Her body was one of the last corpses to be admitted to the Capuchin Catacombs of Palermo in Sicily.

Thanks to Salafia's embalming techniques, the body was well-preserved. X-rays of the body show that all the organs are remarkably intact. Rosalia Lombardo's body is kept in a small chapel at the end of the catacomb's tour and is encased in a glass covered coffin located on a marble pedestal. 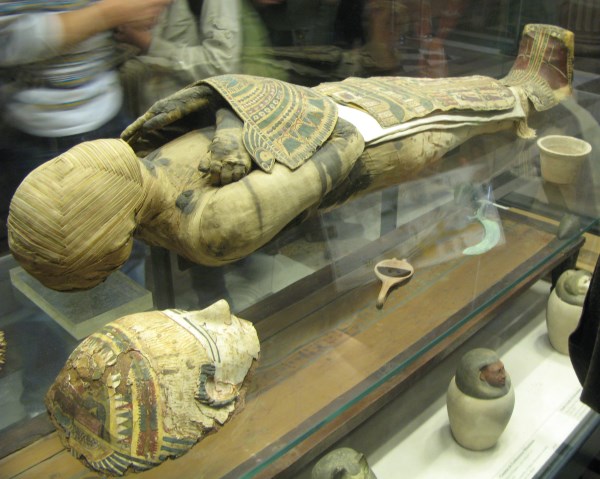 In 2012, a brain-removal tool used by ancient Egyptian embalmers was discovered lodged in the skull of a female mummy that dates back around 2,400 years.

Removal of the brain was an Egyptian mummification procedure that became popular around 3,500 years ago and remained in use during later periods. Identifying the ancient tools which embalmers used for brain removal is difficult, and researchers note that this is only the second time that such a tool has been reported within a mummy's skull.

Located between the left parietal bone and the back of the skull, which had been filled with resin, the object was discovered in 2008 through a series of CT scans. Researchers then inserted an endoscope (a thin tube often used for noninvasive medical procedures) into the mummy to get a closer look and ultimately detach it from the resin.

5Strange Mummy Found by a 10-Year-Old 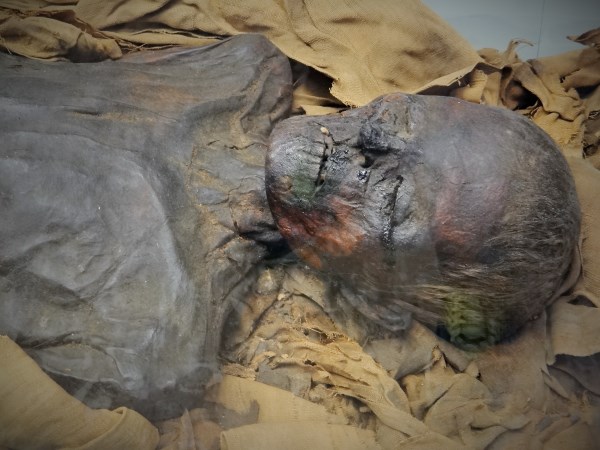 A German boy discovered what appeared to be a bandaged Egyptian mummy inside an old wooden chest in his grandmother's attic.

Experts were investigating whether the "mummy" was a genuine, ancient Egyptian relic, a replica, or something entirely different. It was inside a sarcophagus complete with a death mask, a canopic jar – used by ancient Egyptians to store removed organs – and other artifacts. The ten-year-old, Alexander, made the mystery discovery while searching around his grandmother's flat in Diepholz, Germany.

Alexander's father, Lutz Wolfgang Kettler, a dentist, recalled that his own father had acquired a chest while travelling in north Africa in the 1950s and had it shipped back to Germany. The senior Mr. Kettler had apparently never spoken about the chest or its contents. "Mummy unwrapping parties" were popular among certain elements of German high society in the 1950s, he said. 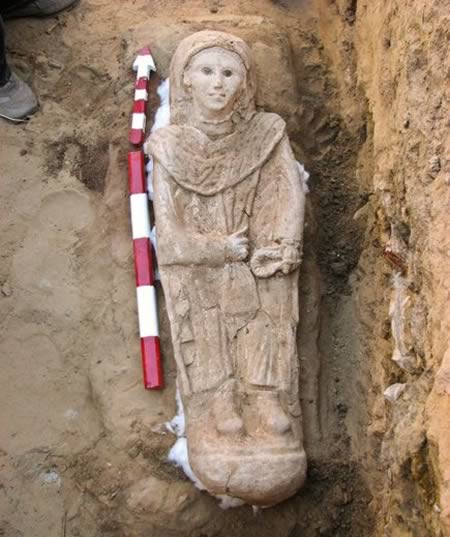 "Dressed" in Roman robes, a 2,000-year-old coffin stares back from a rare Egyptian grave in the Bahariya Oasis, about 225 miles (362 kilometers) southwest of Cairo. On April 12, 2010, Egyptian officials announced that the unopened plaster sarcophagus, believed to contain a mummy, is among the ancient treasures uncovered at a newfound cemetery.

The site contains at least 14 tombs from the era when ancient Rome controlled Egypt from 30 B.C. to A.D. 395. Jewelry, funerary masks, and pottery were also found, though the sand-covered tombs have been damaged by humidity and seeping groundwater. Measuring just 3.2 feet (97 centimeters) long and carved with the finery of an influential woman, the sarcophagus remains something of a mystery.

"When I saw it for the first time, I thought it was a dwarf. ... ," said Mahmoud Affifi, director of Cairo and Giza antiquities for Egypt's Supreme Council of Antiquities. "Maybe she was a small girl, but [even] now we don't know," he said. 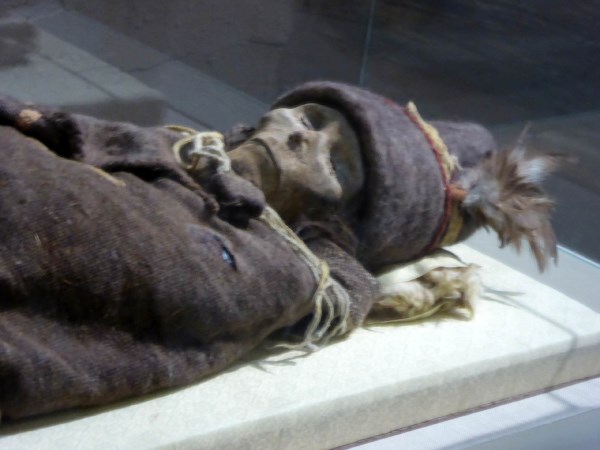 An amazing discovery of 2,000 year old mummies in the Tarim basin of Western China occurred in the early 90s. However, more amazing than the discovery itself was the astonishing fact that the mummies were blond-haired and long-nosed. In 1993, college professor Victor Mayer collected DNA from the mummies and his tests verified that the bodies were all of European genetic stock. Ancient Chinese texts from as early as the first millennium BC do mention groups of far-east dwelling Caucasian people referred to as the Bai, Yeuzhi, and Tocharians. None, though, fully reveal how or why these people ended up there. 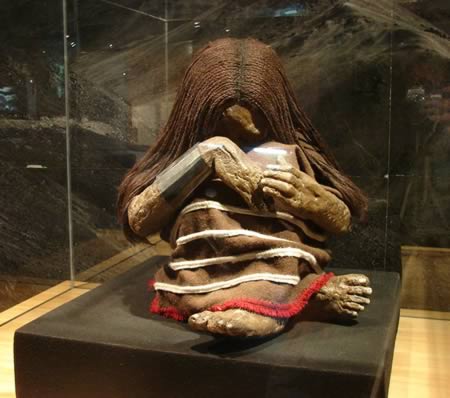 The Plomo Mummy, or La Momia del Cerro El Plomo in Spanish, is the well preserved remains of an Incan child found on Cerro El Plomo in 1954. It was the first frozen mummy discovery from an Incan high-altitude human sacrifice. The mummy is curated by the National Museum of Natural History in Santiago, Chile, while a replica of the mummy is on public display. 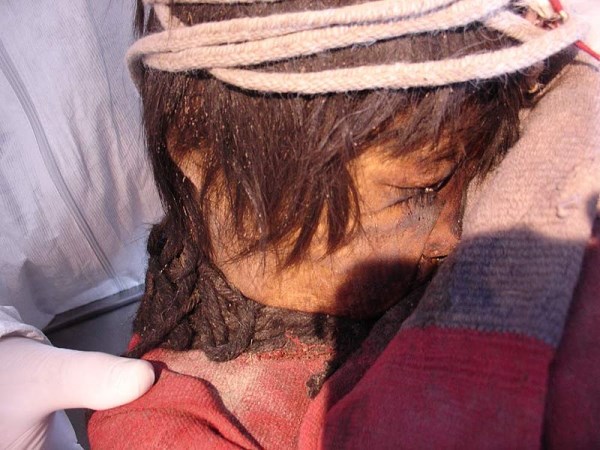 Archaeologists believe that many Incan mummies, including those of children, were human sacrifices to the mountain god Apus.