1Mona Lisa: A Real Hidden Code in Her Eyes

Intrigue is usually focused on her enigmatic smile. However, when viewed under a microscope, historians in Italy have discovered that by magnifying the eyes of the "Mona Lisa" tiny numbers and letters can be seen.

Experts say the barely distinguishable letters and numbers represent something of a real-life Da Vinci Code: in the right eye appear to be the letters LV which could well stand for his name, Leonardo Da Vinci, while in the left eye there are also symbols but they are not as defined. Of course, it's very difficult to make them out clearly but they appear to be the letters CE, or it could be the letter B. In the arch of the bridge in the background the number 72 can be seen, or it could be an L and the number 2. Also, the number 149, with a fourth number erased, appears behind the picture, which suggests that Da Vinci painted it when he was in Milan in the 1490s.

You have to remember that the ­picture is almost 500 years old, so it is not as sharp and clear as when it was originally painted.

2The Last Supper: A Mathematical & Astrological Puzzle, Plus a Secret Musical Score

"The Last Supper" has also been the target of much speculation, usually centered around supposed hidden messages or hints found within the painting.

Slavisa Pesci, an information technologist, created an interesting visual effect by overlaying a semitransparent, mirrored version of the painting on top of the original. The result is that two figures that look like Templar knights appear at both ends of the table, while someone who is possibly holding an infant stands to Jesus' left.

Giovanni Maria Pala, an Italian musician, has also indicated that the positions of hands and loaves of bread can be interpreted as notes on a musical staff, and if read from right to left, as was characteristic of Leonardo's writing, they form a musical composition.

Sabrina Sforza Galitzia, a Vatican researcher, claimed to have deciphered the "mathematical and astrological" puzzle in Leonardo's "The Last Supper." She said that he foresaw the end of the world in a "universal flood" which would begin on March 21, 4006 and end on November 1 that same year. She believed that this would mark "a new start for humanity."

3The Creation of Adam: The Floating Brain Divinity 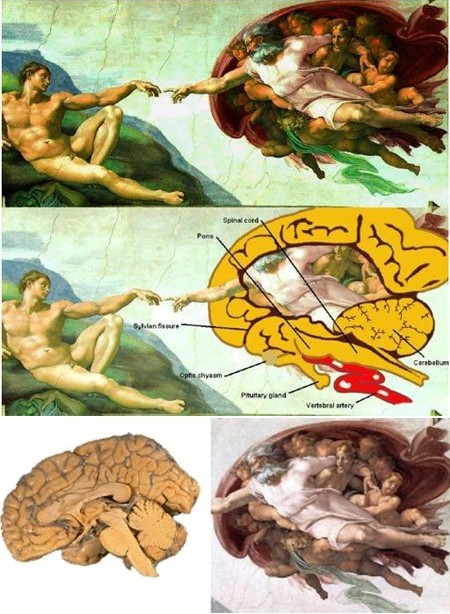 Michelangelo's "The Creation of Adam" has endured not only as the most famous of the Sistine Chapel panels, but also as one of the single most iconic images of humanity.

Michelangelo is recognized as one of the greatest painters and sculptors from the Italian Renaissance. What is not so widely known is that he was an avid student of anatomy who, at the age of 17, began dissecting corpses from the church graveyard.

Now, a pair of American experts in neuroanatomy believe that Michelangelo did leave some anatomical illustrations behind in one of his most famous works - the Sistine Chapel.

While some might dismiss this as a coincidence, experts suggest that it would be harder to explain that this was not Michelangelo's intention. Even complex components within the brain, such as the cerebellum, optic chiasm, and pituitary gland can all be found in the picture. As for that sassy green sash running down the pons/spinal column/dude who is holding God up, it follows the path of the vertebral artery perfectly.

4Sistine Chapel: Another Human Brain Seen From Below 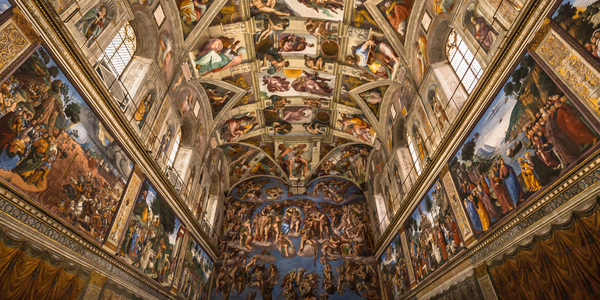 Similar to the masterpiece "The Creation of Adam," experts argue that the Sistine Chapel panels feature another figure of God with a hidden code.

They noticed that God's throat and chest had anatomical irregularities, which were not present in any other figure in the fresco. Also, while the figures are illuminated diagonally from the lower left, God's neck is illuminated straight-on. They concluded that what looks like clumsiness must have been deliberate work by the genius.

By superimposing God's odd-looking neck on the photograph of a human brain seen from below, they showed how the two matched precisely.
They added that a strange roll of fabric that extends up the center of God's robe could represent the human spinal cord.

The lumpy neck in the God figure (A) of the panel matches a photograph of the human brain when seen from below (B) while (C) shows the various parts of the brain apparently hidden in the painting.

Nevertheless, Michelangelo also depicted other anatomical features elsewhere in the ceiling according to scholars, notably the kidney, which was familiar to Michelangelo and was of special interest to him as he suffered from kidney stones.

5The Madonna with Saint Giovannino: Sightings Of UFOs

In addition to getting our attention with the rock hard Baby Jesus abs, Domenico Ghirlandaio's "Madonna with Saint Giovannino" also features an interesting little blob hovering in the sky over Mary's left shoulder.

Above Mary's left shoulder we observe a disk-shaped object that appears to be shining. It is an object which the artist depicted in huge detail, making sure it would stand out in his work of art. To the right of the painting we can see a man who is holding his right arm above his eyes, signifying that this object was extremely bright, while in the upper left hand corner we can see an object that looks like the sun. 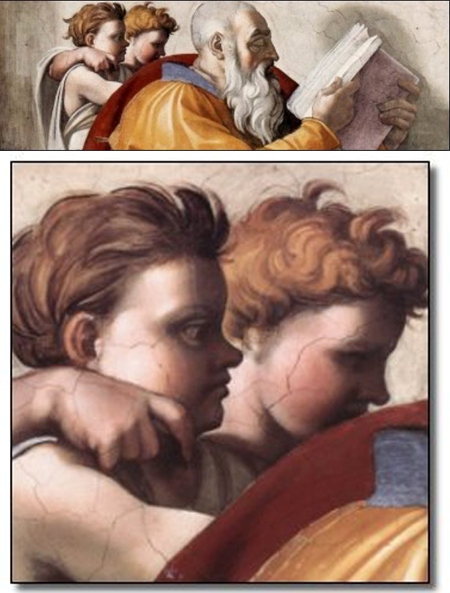 The tension between Julius II and Michelangelo is well documented. Historians note that Michelangelo portrayed the pope in effigy as the prophet Zechariah, and that one of the Angels located behind him makes an extremely obscene gesture.

What that adorable little baby is doing with his finger is called "the fig" and its meaning is not nearly as sweet. By sticking his thumb in between his index and middle fingers, he's making an old world gesture that basically means "f*ck you."

Scanning through the arrangement of figures on the vast 14,000 square foot ceiling of the Sistine Chapel, authors have found shapes that correspond to Hebrew letters.

For example, the figures of David and Goliath form the shape of the letter gimel, which symbolizes "strength" in the mystical Kabbalah tradition.

The authors believe that Michelangelo picked up his knowledge of Judaism while at the court of Lorenzo de Medici in Florence, and the entire Sistine Chapel, which they say is built to the same proportions as the Holy Temple in Jerusalem, is a "lost mystical message of universal love" which was intended to be decoded. 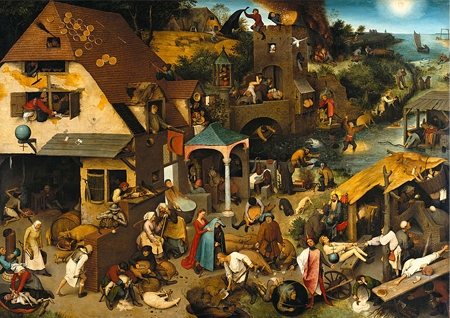 "Netherlandish Proverbs" is a 1559 oil-on-oak-panel painting by Pieter Bruegel the Elder that depicts a land populated by literal renditions of Dutch proverbs of the day.

There are approximately 112 identifiable idioms in the scene. Some are still in use today, such as "swimming against the tide," "the big fish eats the little fish," "banging one's head against a brick wall," and "armed to the teeth."

Other proverbs indicate human stupidity. Some of the figures seem to represent more than one figure of speech, such as the man shearing a sheep left of center at the bottom of the painting. He is sitting next to a man shearing a pig, which represents the expression "one shears sheep and one shears pigs," meaning that one has the advantage over the other, but it may also represent the advice "shear them but don't skin them," meaning make the most of your assets.

9The Supper at Emmaus: A Code Of Silence Recognition For Christians 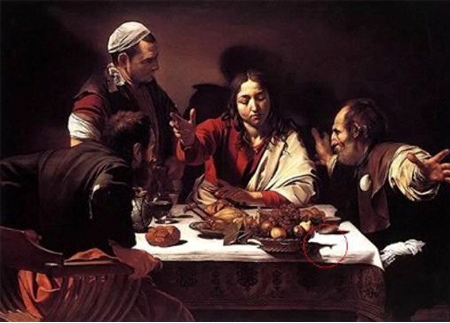 "The Supper at Emmaus" is a painting by the Italian Baroque master Caravaggio.
The painting depicts the moment when the resurrected but incognito Jesus reveals himself to two of his disciples in the town of Emmaus, only to vanish from their sight.

The painting is unusual for the life-sized figures and the dark, blank background. The table features a basket of food which teeters perilously over the edge. There is also an astounding shadow which seems like the figure of a fish, which may indicate a code of silence recognition for Christians. 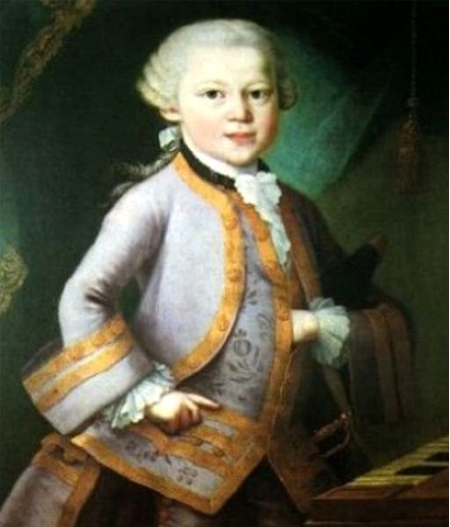 Of course, works of art are not spared the subject of Freemasonry. Portraits of people who hide a hand may indicate a dedication to the cause or a level of hierarchy. Portraits such as this anonymous one of Mozart (possibly from Antonio Lorenzoni) may be examples.