In late 2003, Did Bélizaire, then 36, attempted suicide to finally break a painful and costly addiction to gambling that began when he was seduced by illegal slot machines at age 17.

On the morning of Sept. 20, 2003, Bélizaire called his then-girlfriend on his cellular phone, asked for her blessing, then ended the call without telling her what he was about to do - take a suicide leap from the Jacques Cartier Bridge, a steel truss cantilever bridge crossing the Saint Lawrence River from Montreal Island to the south shore at Longueuil, Quebec, Canada.

Once submerged in the deep waters, however, his survival instinct took over and he was fished from the river.

Bélizaire had been burning through $20,000 or more annually on VLTs, and squeezing cash to play by concocting sob stories to defraud his mother, among others. He also borrowed $1,000 from loan sharks - but with a $50 daily interest charge, that mushroomed to "between $7,000 and $8,000." Seven hours before he tried to kill himself, Bélizaire stole $500 from the petty cash at the Hôtel Place d'Armes, where he worked, figuring he'd make it grow and replace it by morning.

Bélizaire survived, but the attempt cost him the use of his legs. Now he's paraplegic and feels nothing from the chest down. Nonetheless, this misfortune did not get him down, and now he devotes his efforts to tell his story, mostly to young people, sounding the alarm against compulsive gambling.

In the fall of 2005, three days prior to her daughter's 2nd birthday, Angela jumped off the Humber Bridge, holding onto her daughter all the way down. The little girl was taken to the Hull Royal Infirmary where she was found to be hypothermic, but five days later was able to go home. Angela Schumann spent almost two months in the hospital for treatment of lower body fractures.

In 2006, Angela was sentenced to 18 months in prison after admitting attempted murder. 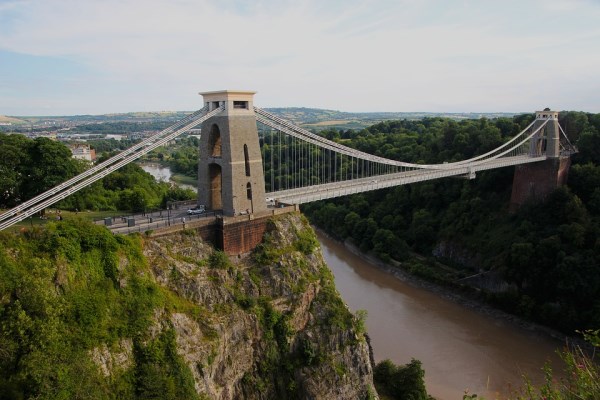 On Friday, May 8, 1885, a young man who was a porter on the Great Western Railway was determined to break off his engagement with Sarah Ann Henley, and thus wrote a letter to the young woman announcing his intention. This preyed on the girl's mind, and in a state of despair she rushed to end her life by a fearful leap from the Suspension Bridge.

Ms. Henley had climbed over the railings and onto the parapet of the Clifton Suspension Bridge, a fall of almost 75 meters (246 ft), and before anyone could reach her she had thrown herself off. However, it was there where the miracle showed up. A billowing effect created by an updraft of air beneath her crinoline skirt slowed the pace of her fall, misdirecting her away from the water and instead toward the muddy banks of the Bristol side of the Avon River.

After her landing in the thick mud of low-tide, two passers-by rushed to her assistance. They found her in a state of severe shock, but alive, and escorted her to the refreshment rooms of the nearby railway station, where she was attended to by a doctor and a detective. Despite being conscious and able to answer questions, the doctor's recommendation insisted that she be escorted to the Bristol Infirmary urgently.

The detective sought the assistance of a local cabman, who refused on the grounds that transporting her covered in filth would make his cab dirty. Despite an offer of payment and stressing that she would die if she wasn't treated urgently, he stubbornly refused.

Finally, with no other option, a stretcher was sought from the local Clifton Police Station, which carried her on a journey of more than an hour to the hospital in Bristol, wherein she was treated for severe shock and internal injuries.

While in the hospital slowly recovering, the story of her misfortune and survival quickly spread and numerous proposals of marriage and fame were offered.

In 2000, at the age of 12, Kevin Hines' battle with bipolar disorder became so intense that he finally decided to end his life by jumping from San Francisco's Golden Gate Bridge.

After his first class at school, Hines took a bus to the Golden Gate Bridge. Despite having been crying for 40 minutes in this place, no one approached him to ask what was wrong. A few minutes later, a tourist approached him and asked whether he could take her photo. Immediately, Hines thought that was clear proof that no one cared, so he took the picture and then jumped.

Instantly, he realized that he had made a mistake and thought to himself, “God save me.” As he was falling Hines came up with a plan to save his life, and threw his head back and tried to hit feet first. Hines was hurtled 40 feet underwater, but miraculously survived.

Hines endured arduous physical rehabilitation after his near-death experience. He now lives by a strict schedule, and has found a combination of drugs and therapy that allows him to regulate his manic highs and depressions. Currently, Hines works with several mental health groups and suicide prevention hotlines.

In June 1995, a 15-year-old teenager named Martin Hinchcliffe jumped off a cliff-top after a disagreement with his girlfriend.

After having a fight with his girlfriend, because she apparently wanted to break off the relationship, Hinchcliffe decided to end his life by jumping from Beachy Head.

Beachy Head is a chalk headland in Southern England, rising 162 meters (531 ft.) above sea level. Its height has also made it one of the most notorious suicide spots in the world.

Once he realized what was actually happening, he devoted his efforts to survive, and the only way he found was by sucking pebbles to stay hydrated. Sucking porous stones to quench his thirst was a trick he had learned from his father while collecting fossils on the beach.

Hinchcliffe was caught between the rocks for three days before he was found by rescuers with only a broken leg.

Hanns Jones' life was in shambles. The love of his life had kicked him out, his work as an inventor stirred little interest, and a lifelong search for his father had turned up empty.

Jones was born in Mineral Wells, Texas, and was reared alone by his mother. He never knew his father, and hit dead-ends when he tried to look for him. During his teenage years Jones went out on his own, served in the Army Reserve, and began working odd jobs to give him time to work on his inventions. One of them was Sock Locker, a device that keeps socks together in the wash.

At 36 years old, Jones was financially devastated and had just broken up with the girlfriend who had given birth to one of his children.

Alone and hopeless, he drove to the center span of the Sunshine Skyway Bridge and jumped 200 feet into the choppy waters of Tampa Bay. As he got closer to the bottom he had the feeling this was a bad idea, and the image of his 18-month-old son, Braner, flashed before him. Suddenly, life was precious. Jones wanted to live.

Jones slammed into the water feet first and lost consciousness. The impact stripped the clothes from his body. When he came to, he felt his hand move. Despite broken ribs on both sides, a broken neck, a burst spleen, and a collapsed lung, he swam nearly half the length of a football field and clung to a bridge piling until rescuers arrived.

During his two-week hospital stay, a woman who finds missing people read about Jones' bridge jump. In just six days, she found his father.

7The woman who jumped off the bridge after a failed relationship

In 1995, a 29-year-old woman named Connie Mercure was preparing to jump over 230 feet into the Lower New York Bay.

Mercure was distraught over a relationship that ended before the holidays, a situation which led her to make a terrible decision; she would jump off from the midpoint of the bridge, which connects Staten Island and Brooklyn.

Police closed the bridge's upper deck to traffic, and negotiators tried to talk her out of jumping. She asked to speak with her parents in Michigan and also her former boyfriend.

As police tried to reach the boyfriend on a cellular phone, Mercure appeared poised to jump and Officer Keith Claire lunged and grabbed her jacket, but she pulled free and plunged into New York Bay.

However, to everyone's amazement, she survived! She was hospitalized in critical condition with a broken leg and pelvis, internal injuries, and hypothermia.

8The young man who jumped off the bridge after severe depression

Just before 11 p.m. on May 28, 1979, a 22-year-old young man named John Dittmann stood precariously outside the east rail of the Aurora Bridge; he looked down and saw only darkness and certain death. Then, he jumped.

Dittmann always felt suicidal, blaming it on his daily regimen of gulping tranquilizers to treat mental illness and drinking alcohol to offset the pills. He hated his life, and for three weeks he stared at the bridge before making the fateful decision to end his life.

It took only a fraction of a second for Dittmann to decide that he wanted to live. However, it was too late. He fell downward at a rate of 33 feet per second. He quickly reached a “terminal velocity” of 70 miles per hour. Dittmann threw his arms backward, and managed to straighten his body out so he did not hit the water in a belly flop. He managed to extend his feet and point his toes to enter the water cleanly. It saved his life. Dittmann sank several feet into the water, then rose back to the surface. He managed to swim to shore with only a fractured back and bruised lungs.

"It was just a lot of fear, being out there in midair and going down real fast. I was really scared. I thought about what the other option was. It was clear-cut I wanted to live real bad," said Dittmann.