What happens when we die? Is there an afterlife? Thousands of stories from people who were clinically dead, but then came back to life, share similarities: a warm white light, a tunnel, and dead friends or family welcoming them. Check out some of the most amazing near-death experiences on record. 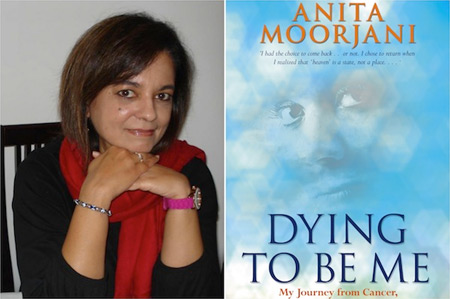 Anita Moorjani, an ethnic Indian woman from Hong Kong, had end stage cancer (Hodgkin's Lymphoma) and was being cared for at home, but on the morning of February 2, 2006 she did not wake up. She had fallen into a coma. Doctors said she would not make it beyond the next 36 hours since her organs were no longer functioning and her body had started to swell up, creating open skin lesions. In spite of this, Anita saw and heard the conversations between her husband and the doctors that were taking place outside her room about 40 feet away down a hallway. She also saw her brother on a plane, having heard the news that she was dying, coming to see her. Both things were later confirmed.

Then she claims to have "crossed over to another dimension, where I was engulfed in a total feeling of love. I also experienced extreme clarity of why I had the cancer, why I had come into this life in the first place, what role everyone in my family played in my life in the grand scheme of things, and generally how life works. I realized what a gift life was, and that I was surrounded by loving spiritual beings, who were always around me even when I did not know it. I found out that my purpose now would be to live ‘heaven on earth' using this new understanding, and also to share this knowledge with other people."

In her now famous book, "Dying to be me", Anita explains how she "had the choice of whether to come back into life, or go towards death. I became aware that if I chose life, my body would heal very quickly. I then started to understand how illnesses start on an energetic level before they become physical. I became aware that everything going on in our lives was dependent on this energy around us, created by us. Nothing was real – we created our surroundings, our conditions, etc. depending where this “energy” was at. If I chose life, the results would show that my organs were functioning normally. If I chose death, the results would show organ failure as the cause of death, due to cancer. I was able to change the outcome of the tests by my choice. I made my choice, and as I started to wake up (in a very confused state, as I could not at that time tell which side of the veil I was on), the doctors came rushing into the room with big smiles on their faces saying to my family 'Good news – we got the results and her organs are functioning – we can't believe it!'. After that, I began to recover rapidly."

Doctors were quite surprised and, once Anita became stable, they started tracking down the lymph nodes they saw when she entered the hospital. Tests had shown swollen lymph nodes and tumors the size of lemons extending from the base of her skull all the way to her lower abdomen, but doctors found none. They did a bone marrow biopsy, again to find the cancer activity so they could adjust the chemotherapy according to the disease, but there wasn't any in the bone marrow. Because they were unable to understand what was going on, they made her undergo test after test, all of which Anita passed easily. She then had a full body scan, and because they could not find anything, they made the radiologist repeat it again.

"Because of my experience, I am now sharing with everyone I know that miracles are possible in your life every day. After what I have seen, I realize that absolutely anything is possible, and that we did not come here to suffer. Life is supposed to be great, and we are very, very loved. The way I look at life has changed dramatically, and I am so glad to have been given a second chance to experience 'heaven on earth.'"

2A neurosurgeon's NDE, trying to prove consciousness is independent from the brain 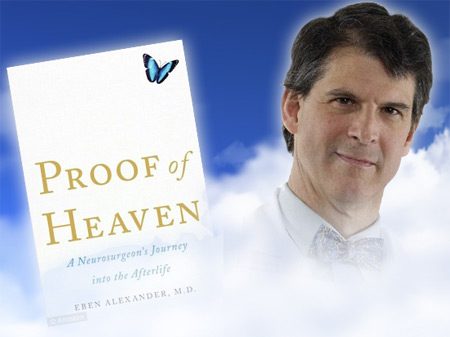 Eben Alexander, a neurosurgeon from Duke University, is the famous author of The New York Times best-selling autobiographical book "Proof of Heaven: A Neurosurgeon's Journey into the Afterlife" (2012), in which he asserts that his out of body and near death experience (NDE) while in a meningitis-induced coma in 2008 proves that consciousness is independent of the brain, that death is an illusion, and that an eternity of perfect splendor awaits us beyond the grave — complete with angels, clouds, and departed relatives, but also including butterflies and beautiful girls in peasant dress.

According to him, the current understanding of the mind “now lies broken at our feet ”— for “What happened to me destroyed it, and I intend to spend the rest of my life investigating the true nature of consciousness and making the fact that we are more, much more, than our physical brains as clear as I can, both to my fellow scientists and to people at large.” Alexander's book was excerpted in a Newsweek magazine cover story in October 2012.

According to his critics, "his NDE occurred not during his coma, but as he was surfacing from the coma and his cortex was returning to full function. It is curious that he does not allow this obvious and natural explanation, but instead insists on a supernatural one." The author responded that "only isolated pockets of deep cortical neurons were still sputtering, but no broad networks capable of generating anything like what we call 'consciousness' were."

390 Minutes in Heaven, the story of Reverend Don Piper 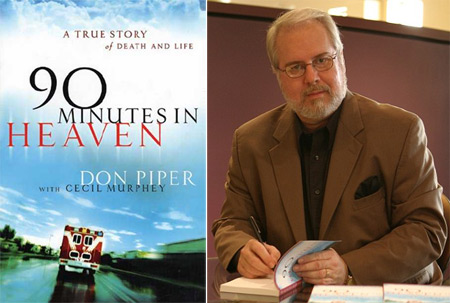 In 1989, Reverend Don Piper of Pasadena, California was travelling in a car when it was crushed by an 18-wheeler in a head-on crash. Paramedics declared him dead. He was without a pulse, he says, for 90 minutes before he came back to life after a passer-by began to pray and sing hymns over his body. "The steering wheel impaled me in the chest and then the car's roof collapsed on my head so there's just no way you could survive this accident," he said.

However, he says that the experience he had before rejoining the living could not be explained as anything other than life after death. He says he remembers music that was "beyond spectacular'" and aromas that he'd never smelled before. His grandfather was there to greet him alongside several others who had died before him. They all stood in front of a magnificent gate with lights that were "pulsating with life," he said. "You know, if I was having a dream about it, this wouldn't be in it," he said. "Some of these people who met me at the gates, I haven't thought of in decades."

Mr. Piper, who endured dozens of surgeries to fix his bones, had to learn to walk again. He wrote about the trauma in The New York Times best-seller 90 Minutes in Heaven: A True Story of Death and Life. He believes he was sent back to spread the message that "heaven is a real place." 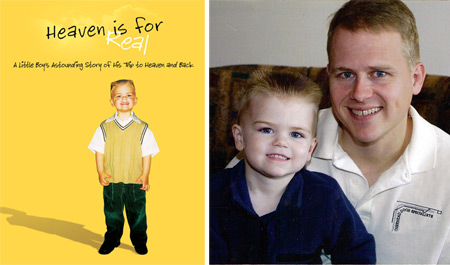 The New York Times best-selling Christian book "Heaven is for Real" (2010) is a father's account of his son Colton's trip to heaven and back. After discovering that Colton's appendix had ruptured, he was rushed to the hospital. Unconscious, the boy alleges to have met Jesus, God, his great-grandfather, whom he had never met, and his older sister, who was lost in a miscarriage but nobody had told him about.

Colton also made other extra-biblical claims that he personally met Jesus riding a rainbow-colored horse and sat in Jesus' lap, all while the angels sang songs to him. He also says that he saw the Virgin Mary kneeling before the throne of God and, at other times, standing beside Jesus.

5Elizabeth Taylor's NDE and her encounter with her dead ex-husband 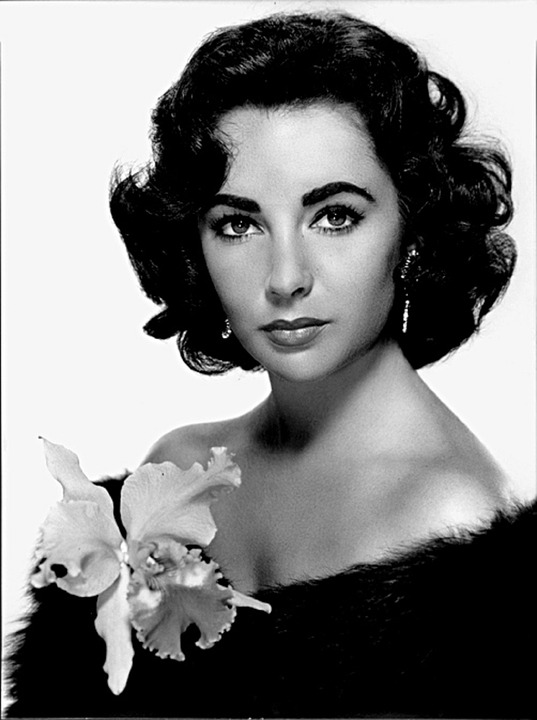 Interviewed by Larry King on CNN's Larry King Live and also by ABC News, famous actress Elizabeth Taylor spoke about her experience of dying on the operating table while undergoing surgery, and of passing through a tunnel towards a brilliant white light. Taylor said that while she was clinically dead, she had encountered the spirit of Michael Todd, one of her former husbands, whom she referred to as her great love. She had wanted to stay with Todd, she said, but he had told her that she had work and life ahead of her, and he "pushed me back to my life." Following her resuscitation, the eleven-person medical team, including doctors, nurses, etc., witnessed Taylor's testimonial of this event.

"I was pronounced dead once and actually saw the light. I find it very hard to talk about, actually, because it sounds so corny. It happened in the late '50s, and I saw Mike (Todd, Taylor's third husband, who was killed in a plane crash in 1958). When I came to, there were about 11 people in the room. I'd been gone for about five minutes - they had given me up for dead and put my death notice on the wall. I shared this with the people that were in the room next to me. Then after that I told another group of friends, and I thought, ‘Wow, this sounds really screwy. I think I'd better keep quiet about this.'" 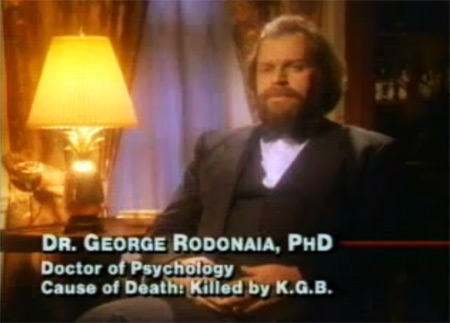 Pronounced dead immediately after he was hit by a car in 1976 while trying to leave the URSS, Rodonaia was left for three days in the morgue. He did not "return to life" until a doctor began to make an incision in his abdomen as part of an autopsy procedure. Prior to his NDE he worked as a neuropathologist. He was also an avowed atheist. However, after the experience he devoted himself exclusively to the study of spirituality, taking a second doctorate in the psychology of religion. He then became an ordained priest in the Eastern Orthodox Church. He served as a pastor at the St. Paul United Methodist Church in Baytown, Texas.

At this point, Rev. George Rodonaia held an M.D. and a Ph.D. in neuropathology and a Ph.D. in the psychology of religion. He delivered a keynote address to the United Nations on the "Emerging Global Spirituality." Before emigrating to the United States from the Soviet Union in 1989, he worked as a research psychiatrist at the University of Moscow. Dr. Rodonaia's experience, in his own words, can be read in Phillip Berman's book, The Journey Home. He died in 2004.

7Oldest NDE on record: written by Plato in 380 BC 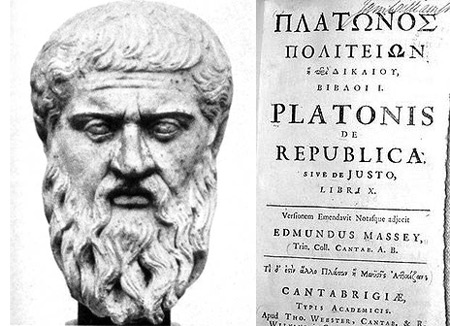 The oldest surviving explicit report of a NDE in Western literature comes from the famed Greek philosopher Plato who, in the year 380 BC, described such an event in the tenth book of his legendary work entitled Republic. Although it's called the "Myth of Er", the word "myth" in this case means "word, speech, account," rather than the modern meaning. The story begins as a man named Er dies in battle. Ten days later, when the bodies of those who died in the battle are collected, Er's body has not decomposed. Two days later he revives on his funeral-pyre and tells others of his journey into the afterlife, including an account of reincarnation and the celestial spheres of the astral plane. The tale introduces the idea that moral people are rewarded and immoral people are punished after death. The story includes an account of the cosmos and the afterlife that greatly influenced religious, philosophical, and scientific thought for many centuries.