Meet some of the coolest variations of foosball tables, men's favorite table game. 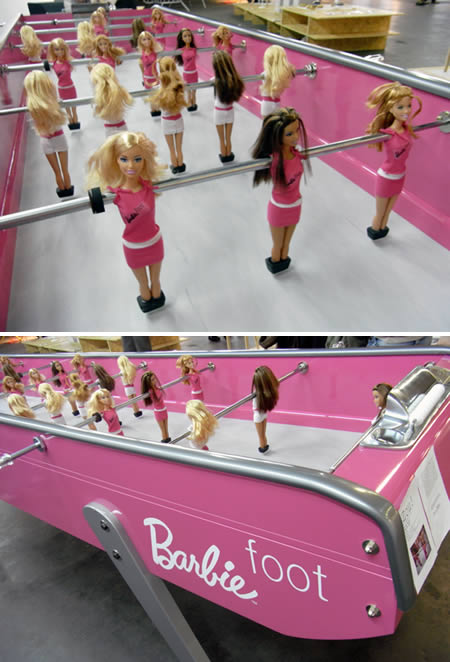 Trying to get your girlfriend to play foosball? This Barbie-themed foosball table might just do the trick. Created by French designer Chloe Ruchon and presented at the DMY Design Festival 2009, in Berlin, Barbiefoot combines Barbie dolls and table-football. You could say Ruchon managed to create something that men and women might actually enjoy doing together. 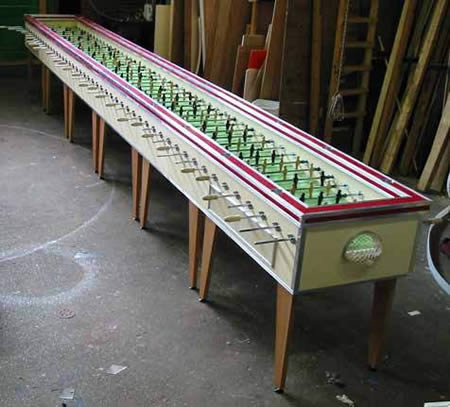 Here's the largest football-table game in the world. In fact, Table Football XXL is so huge, two entire soccer teams — 22 players — could face off with it, settling their challenges without ever setting foot on a real field. This monster was built by Amsterdam brewer Amstel, a stunt that coincided with the European Champions League Finals. If you wanted to buy this one, you'd need six flight cases just to ship it to you. 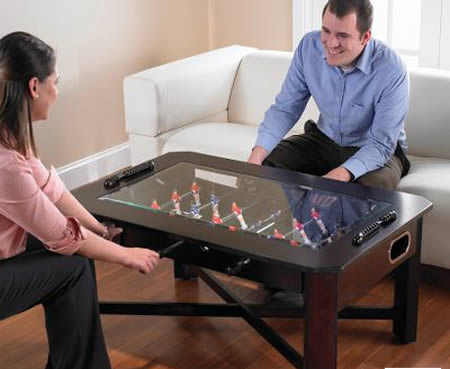 This is a coffee table with a built-in foosball game. Made from solid poplar, the table stands 20" high, allowing you to sit comfortably or kneel while grasping your team's three hand-carved, solid wood control rod handles. 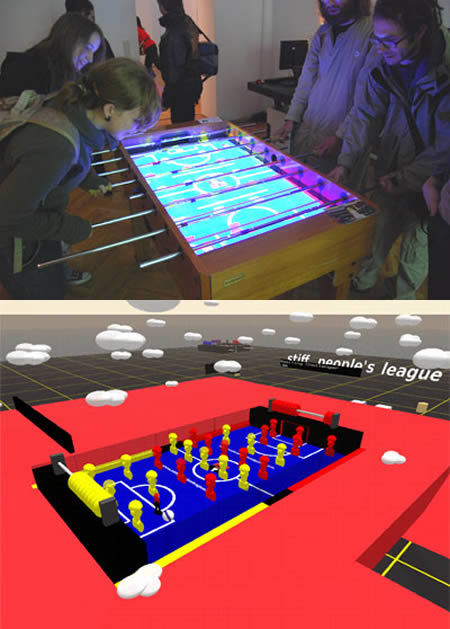 It's a mixed-reality foosball, or table soccer game, which combines players from the virtual world Second Life with players from the real world. The game will feel quite different to a player, depending on which world she comes from: to virtual players, it's a life-size soccer stadium where they run around kicking the ball. To real-world players, it's a foosball table where the goal isn't to hit the ball: it's to create obstacles for the opposing team's avatars, and to knock those avatars out of the way. 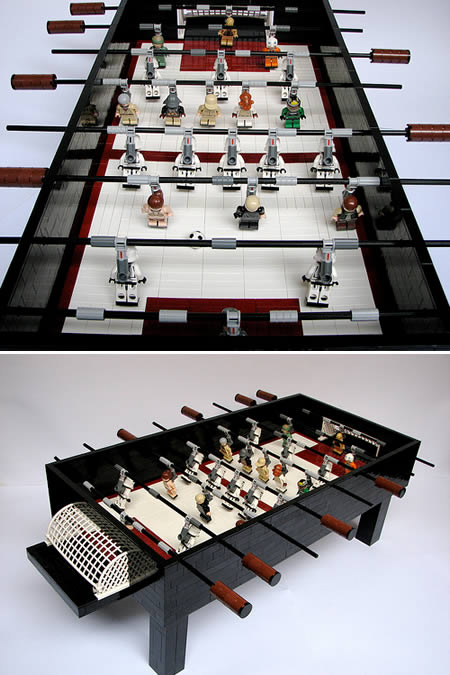 Now how cool is that – a Lego Star Wars Foosball Table which sees all of the foosmen being replaced by Lego Star Wars mini-figs? The entire table is one fantasy piece of Lego land. 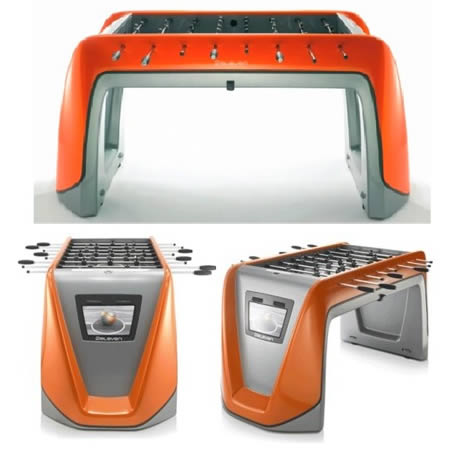 This new rig from 2eleven will no doubt attract its fair share of attention nonetheless and, unlike some of those other units, it's actually pre-built. While there doesn't seem to be a complete breakdown of all its intricacies, the table does come equipped with some LED score displays, a pair of LCD displays apparently intended to display advertisements, an automatic ball lift mechanism and, yes, cup holders.

7The Foosball Table of Kings 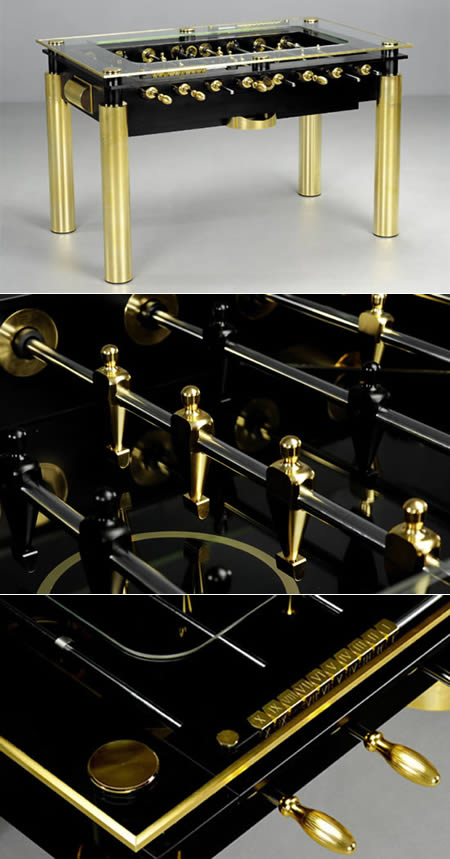 Commonly the foosball table is made up of wood and common metals much unlike ‘the Rolls Royce' of all foosball tables. The Foosball Table of Kings -Lux Gold is some of the world's most expensive foosball tables. Considered as an ultimate luxury toy worth approximately $29,724. The metal in the table is stainless steel that can be gilded in different colors including the most popular color being gold. This luxurious toy is coveted by all foosball lovers. 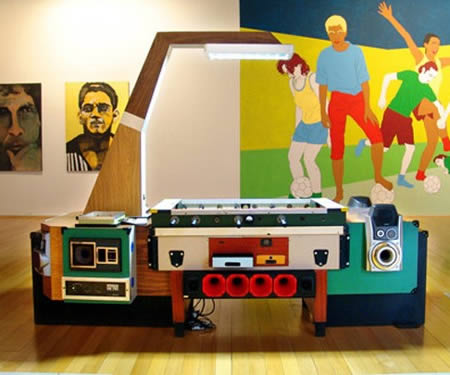 Highly modified foosball tables are a dime a dozen, but this contraption could easily be mistaken for some sort of Martian gaming machine at first glance. Dreamed up and crafted by designer Chelpa Ferro, this Tota Treme Terra looks to be a vanilla foosball table with an artsy overhead light and a hodgepodge of speakers wrapped all around. Word on the street has it that the machine belts out sound effects based on the action up above, but sadly, the actual details about this potential ninth wonder of the world are being left to our imaginations. 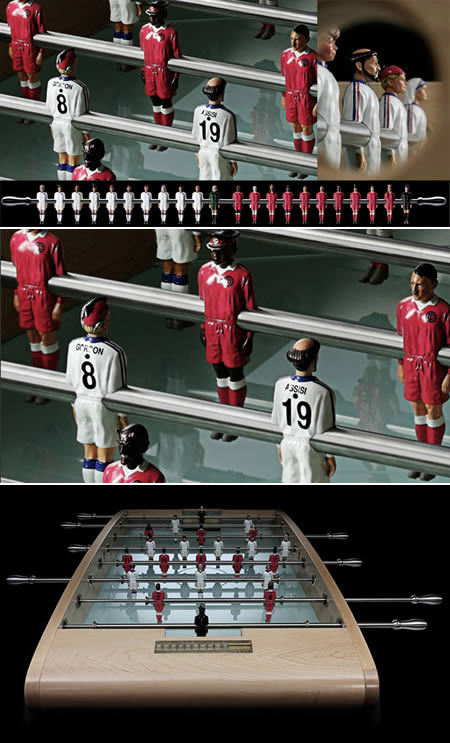 When it becomes good versus evil, which side of the foosball table are you on? On the team of Evil XI we have: Pot, Lucifer, Caligula, Ripper (as in Jack), Impaler (as in Vlad the), Hitler, Macbeth (as in Lady), Hyde, Klebb (as in Rosa), Amin, Catcher (as in the Child). Playing for Good XI we have: Claus (as in Santa), More (as in Sir Thomas), Moore (as in Bobby), Gordon (as in Flash), Robin (as in Christopher), God, Assisi, Jekyll, Poppins, Teresa, M.K. Gandhi. This is a limited edition “opus football table” by Eleven Forty for the super exclusive 20LTD. Only 20 were made, and it retails for 14,500 pounds. 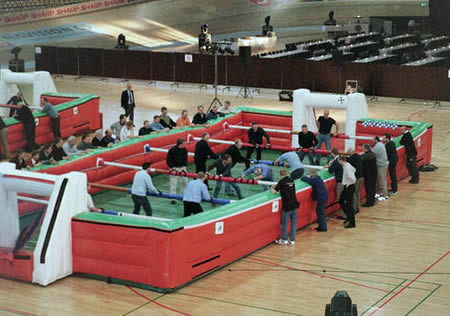 The Human Table Football is a giant inflatable version of the popular pub table football game and is hilarious fun! Human players are attached by Velcro to plastic poles, which slide from side to side across a giant pitch with inflatable sides.