The loss of a beloved pet is a tough pill to swallow. Believe us, we at Oddee have collectively said our goodbyes to all too many of them.

Still, most people will eventually make their peace with it. We’ll bury our friends, feel bad for a while, but eventually, time moves on.

But it wasn’t so for one woman from Cedar Falls, Iowa. The retiree, who wants to remain anonymous, lost her precious Mr. Tufts some time ago.

Mr. Tufts was a cat with semi-long, black fur and coppery eyes. He had a small white patch on his throat, tufts on his ears and between his toes, and a glorious, fuzzy tail that was to die for.

And die Mr. Tuft did. The loss left his owner devastated and mourning.

“I had never had such a wonderful creature. It was harder losing him than any other cat I’ve ever had,” she told The Courier.

But if you were to visit this retired cat lady’s home, you’d think she’d gotten over Mr. Tufts. She has a new cat.

Mr. Tufts, Jr., is a cat with semi-long, black fur and coppery eyes. He has a small white patch on his throat, tufts on his ears and between his toes, and a glorious, fuzzy tail that is to die for.

Seem familiar? It probably does, because Mr. Tufts Jr. is a clone. 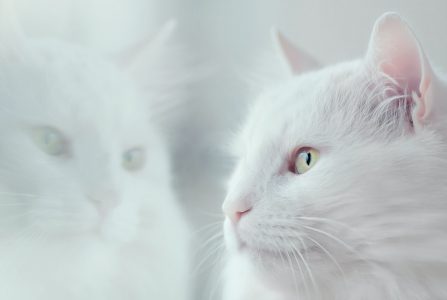 So maybe our cat lady didn’t quite move on. Instead of getting just any new cat, she decided to have Mr. Tufts immortalized through advanced biological science.

While the original Mr. Tufts was still alive and kicking, she brought him to the clinic of Dr. Kevin Christman at the Cedar Valley Veterinary Center. Dr. Christman extracted living tissue samples from the cat to preserve its genetic blueprint.

“We had to sedate him and take a little skin, fat, and hair – tiny pieces of tissue, like taking a biopsy sample,” Christman explained.

He had never in his 10-year career taken part in cloning an animal. The prospect seemed exciting, so he decided to offer his assistance.

“Obviously, I’m science-minded, so it was very interesting and kind of cool. He was an awesome cat, so what better cat than Mr. Tufts?” asked Christman.

So, the recipe to making another Mr. Tufts was safely secured. But neither the cat lady, nor Dr. Christman, could clone him themselves.

For that, they needed an expert.

Defying Death… At a Price

They found that expert in Cedar Park, Texas. Lots of cedars going on with this cloning business.

ViaGen Pets is a pet cloning and genetic preservation company. They have extensive experience in cloning animals. The firm’s helped preserve the endangered Przewalski’s horse through cloning, for example.

Christman and the cat lady contacted ViaGen after Mr. Tufts had passed, asking about the possibility of cloning him. The company said that they could definitely do it, but it would cost the cat’s owner dearly.

Sounds like a deal with the devil, but no eternal souls were exchanged in this transaction. Only cold, hard cash. A total of $35,000 worth of it.

Apparently, no price was too high for our cat owner, since she coughed up the money. Christman sent the extracted genetic material over to ViaGen, and their experts got to work.

Melain Rodriguez, ViaGen’s client services manager, said they replaced the nucleus of a female cat’s egg with one of the frozen cells from Mr. Tufts. Then, they joined the egg and cell together and transferred the whole shebang to surrogate cat mother.

After a normal feline pregnancy and birth, Mr. Tufts Jr. entered the world.

Same, but Different, but Still the Same

Despite his artificial origins, Mr. Tufts Jr. is no different from any other cat. Rodriguez explained that the copycat is a genetic twin of the original Mr. Tufts.

ViaGen does no genetic modification on the animals it works on. Mr. Tufts Jr. is identical to his progenitor in looks, temperament, and intelligence, said Rodriguez.

She did say, though, that it was good that his owner had Christman extract the cat’s essence before he passed.

“It’s much better to have samples from living cells. We recommend pet owners let their vets know that they’re interested in cloning or want to clone their pet, so they can be proactive about getting a tissue sample, such as when the pet is under anesthesia for a dental cleaning or spay-neuter, to be prepared for when that time comes,” Rodriguez said.

Although Mr. Tufts Jr. is supposed to be identical to the original cat in every way, his owner has noticed one difference. The clone is much healthier.

“The original Mr. Tufts had been found on a forest trail and had a very bad respiratory illness,” she said. The clone has not developed this condition, probably due to never having been a stray.

Guilt, but Is It Warranted?

She does, however, feel kind of bad on putting all that money into an essentially selfish endeavor. She could afford it, sure, but the cat lady still felt she needed to make amends somehow.

To begin with, she adopted Mr. Tufts Jr.’s surrogate mother. The young kitty gets to live with his mama and an eerily familiar-looking picture of his dad.

She has also donated money to the Cedar Valley Veterinary Center, is paying for her great-niece’s college education, and has pledged another $35,000 to Habitat for Humanity.

She’s clearly not hurting for money, and it seems to be going to good causes. Whether she needed to go those lengths, though, is up to your own judgement.

But who wouldn’t want their dear pet back from the dead? And cloning seems a safer option than finding your nearest Pet Sematary.