And this is what happened.

Nathan Drew Morgan, 29, was with a female companion at Lake Keowee in South Carolina on Tuesday March 15th.

An elderly couple on a nearby pontoon noticed that Morgan and the woman with him were in distress in the water after falling off the jet ski sans life jackets. The jet ski continued around the lake so the boaters drove over to rescue the two, and this is when it got weird.

Morgan became agitated, and started to assault the couple, according to a statement made by officers. Information gathered by investigators suggested he wanted to get back on his jet ski.

“After a second encounter, the man on the pontoon shot the man fearing for his and his wife’s life while being assaulted,” according to the Oconee County Sheriff’s Office. “The man who was shot died on the pontoon.” 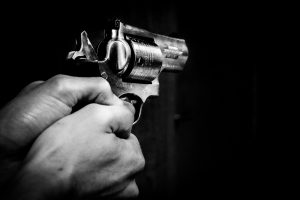 Police arrived on the scene just past 2:15 p.m. that day after being told that a shooting had occurred. A later autopsy report revealed that Morgan had died from a single gunshot wound to the chest.

Investigators concealed the identities of those involved while the investigation was on going and made sure that everyone was cooperating with the police. A court ruling recently called the case an act of self-defense, and therefore the shooter won’t face any charges.

A police report published last Friday stated, “Investigators met the 10th Circuit Solicitor’s Office yesterday to present the evidence and information obtained in the case. Based upon evidence that was presented, 10th Circuit Solicitor David Wagner has determined that the shooting was in self-defense and no charges will be filed. According to Investigators, all parties have been notified of the decision not to file charges in the case. The Oconee County Sheriff’s Office is asking for continued prayer for the family of Nathan Drew Morgan, who is the deceased as a result of the shooting.”

Friends called Morgan hardheaded and said that he would argue with anyone about anything, but of course they wouldn’t have wanted him any other way. RIP Morgan