It’s winter across the United States, and this year especially, even the south is feeling it. Florida experienced especially low temps, and it wasn’t good for the iguanas.

South Florida residents were warned with the possibility of falling iguanas, due to the cold. The National Weather Service warned people that the unseasonably cold temperatures could cause the rigid reptiles to fall out of the sky, or more realistically, out of the trees.

The motionless creatures were seen in the middle of sidewalks and backyards. Iguanas become “cold”and sluggish once the temperature drops below 50F and are susceptible to actually freezing once temperatures drop around 40F.

It’s because of this cool down that they so easily fall out of the trees they’ve been living in. Although they appear lifeless, they are not dead. 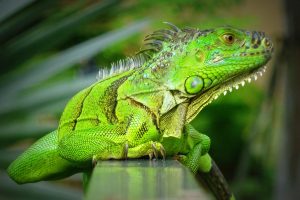 Florida residents shared videos and Twitter saw the real deal when it came to these cold creatures. One Twitter user even captured the resurrection of an iguana as it “came back to life.”

An iguana was covered in sunlight and after being warmed slowly crawled back to life after being temporarily frozen. Did you know that iguanas are not even Florida natives?

It’s hard to believe, because they are everywhere in the state, but it’s true. Iguanas are actually an invasive species and are a nuisance when they are not frozen.

Not only do they poop and leave their droppings on decks and inside swimming pools, but they can also cause infrastructure issues due to digging small burrows into sidewalks and foundations. Wildlife conservationists recommend people don’t touch or attempt to warm the iguanas. According to them, iguanas may come back to life due to your efforts, but then feel threatened if a person is close.