If you were to visit Jeanne Pouchain, she would probably treat you with all due hospitality. The 58-year-old, from the town of Saint-Joseph near Lyon in central France, might show you her extremely fluffy cat and serve you tea, a glass of wine, or whatever the French traditionally serve their guests.

But above all, you would have no doubts that Pouchain is very much alive. That seems like a strange point to make, but her story just goes to show how you shouldn’t take even something so obvious for granted.

You see, according to the French authorities, Pouchain is dead, deceased, an ex-cat owner. Based on official records, she is no more.

That is, of course, not actually the case but good luck convincing the French state of the fact. Pouchain has been trying to get herself relisted among since 2017, to no avail.

“I have no identity papers, no health insurance, I cannot prove to the banks that I am alive… I’m nothing,” she told The Guardian.

Indeed, life as one of the living dead is even worse than what zombie movies would have you believe. Anything that requires official identification is no longer on option for you.

Pouchain can’t have a functional credit card – not that she’d need one since all her bank accounts have been closed due to her supposed demise. She doesn’t have a driver’s license, a passport, nothing.

As far as authorities are concerned, Pouchain no longer exists. 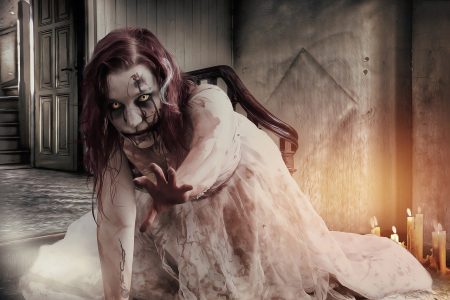 Her bizarre zombie status got its start more than a decade ago. Back then, Pouchain was a private business owner managing her own company.

In 2004, she had to let one of her employees go, reportedly due to her business losing a major contract. Perhaps there was something fishy going on, as that same year an industrial tribunal ordered her firm to pay the fired employee $17,000 in damages.

In any case, that was the judges’ decision. However, as the penalty was imposed on Pouchain’s company, not her person, the court ended up not enforcing the ruling when Pouchain didn’t pay sum.

Five years later, in 2009, the ex-employee sued Pouchain again. This time, though, the case got thrown out of court.

After that, though, is when the story starts getting in weird. In 2016, a French appeals court ordered Pouchain’s son and husband to pay the outstanding damages bill.

That was because the court had become convinced that she was dead. According to Folkspaper, the ex-employee told the industrial tribunal that her ex-employer had not answered her letters and had supposedly past on.

In November 2017, Pouchain’s name was struck from all official records. She was now officially dead, and so her nightmare began.

Naturally, Pouchain hasn’t taken such an outlandish court decision sitting down – or laying in a coffin. After all, the judges ruled her to be dead without any due process or investigation.

“I went to see a lawyer who told me it would be quickly resolved as I had been to my doctor who certified that I was very much still alive,” Pouchain told The Guardian.

But as it usually goes with bureaucracy, resurrecting Pouchain wasn’t as easy as she and her lawyer thought. As a court of law had declared dead, a simple doctor’s not didn’t have the authority to bring her back to life.

Sylvain Cormier, Pouchain’s lawyer, is just as flabbergasted as she is that nobody thought to check whether or not his client was still alive.

“It’s a crazy story. I couldn’t believe it. I never thought that a judge would declare someone dead without a certificate,” Courmier said.

“But the plaintiff claimed Mrs. Pouchain was dead, without providing any proof and everyone believed her. Nobody checked,” he added.

Just this week, Pouchain and her lawyer attempted to bring her back from the grave. They accused the ex-employee of fabricating Pouchain’s death in order to get the outstanding damages compensation from her heirs.

The ex-employee’s lawyer, on the other hand, argued that Pouchains had faked her own death so she wouldn’t have to pay. If that is true – and we’re not saying it is – Pouchain clearly didn’t think such a ploy would backfire this badly.

“t’s time someone said ‘stop’. If I don’t fight nobody is going to fight for me,” Pouchain lamented.

“My husband’s grandmother is 102. She has lived through many things, including the war, but she says she’s never suffered anything as hard as what I’ve been through,” she added.

Being mistakenly removed from the ranks of the living sounds unbelievable, but it’s actually much more common than you might think. In the U.S., for example, more than 12,000 people are wrongly declared dead every year, according to the Smithsonian Magazine.

The U.S. Social Security Administration (SSA) has maintained the Death Master File since 1980. Since then, more than half a million Americans have found out in the middle of an ordinary day that they’ve supposedly passed on.

Unlike in Pouchain’s case, most of these mistakes have no malicious previous employees behind them. The most common cause seems to be a simple typo when a dead person’s social security number is entered into the Death File.

Imagine that. One small typing error and your entire life is gone, at least from the official record.

Who knows, it could even happen to you. When was the last time you checked whether you’re still alive?