On the surface, Yurii Tolochko seems like every woman’s dream man. The bodybuilder and actor from Kazakhstan is pretty much the definition of “beefcake” – a sculpted body of bulging muscles, a chiseled jawline, and a handsome face to boot.

Unfortunately for you, ladies (and gents who might’ve liked what they read), this Central Asian Adonis is spoken for. Should you still want to send him a love letter, though, you can trust that his wife Margo won’t get mad.

In fact, she won’t be doing much about it all. That’s because Tolochko is married to a silicone sex doll.

Talk about an unconventional marriage. But hey, if it makes him happy, who are we to judge?

Unfortunately, there seems to be some trouble in paradise. Tolochko was recently caught publically cheating on Margo.

Apparently, Margo had some kind of an accident just before Christmas and she, to quote her husband, “broke.” And what do you do when you get injured?

That’s right, you go to a hospital. Or in Margo’s case, whatever repair shop maintains sex dolls.

“She is broken. Now she is being repaired. She’s in another city,” Tolochko said on Instagram. “When she recovers, it will be a gift for both of us.”

As the famous song goes, though, waiting is the hardest part, and it got to be too much for Tolochko. And so he posted a video of himself on Instagram sensually caressing some indescribable silvery object.

Just a word of warning, there’s a lot of scantily-clad male skin in that video. But if you watch it to the end, you’ll find out Tolochko’s new lover is some kind of a mask-type… Thing.

Whatever floats his boat, we suppose. 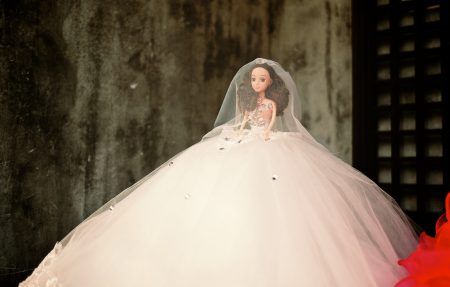 Tolochko’s followers on Instagram weren’t quite so understanding, though. Some of them really like Margo and didn’t appreciate Yurii finding a “new passion,” as he put it.

“Hey… Are you cheating on your wife?!” one follower asked. Tolochko seemed to accept that he couldn’t talk his way out of this and meekly admitted it.

“Somehow I don’t think your wife would have much to say about it all anyway,” another commenter quipped.

Others, seeing how Tolochko had seemingly started swinging with another lifeless object, questioned whether he was feeling quite alright.

“So I’m super open minded but I must confess that I felt worried about his mental health,” yet another user commented.

“Anyhow, f*** haters, as long as he doesn’t hurt anyone he can do whatever he wants and he deserves respect,” they added in the same message, though.

The video wasn’t the only occasion Tolochko was caught on camera with his silver sweetheart, though. In another post (which we won’t link to) he poses wearing the mask, a similarly colored strap around his body, and nothing else.

“My love is so great that I can’t sleep because I think of you. If I say you’re my friend, it’s a lie. You’re more than just a friend,” he said in the post.

Whether he’s referring to the silver mask or Margo is anyone’s guess.

Despite the bizarre nature of his marriage and his fresh lover, Tolochko – who identifies as pansexual – seems to be serious about Margo. He says he and the sex doll share a “deeply emotional relationship”.

And they should, considering that they’ve been together for nearly two years. Tolochko originally met Margo in a nightclub sometime in early 2019 when he saved from another man who was reportedly abusing her.

We’re not even going to speculate how that series of events went down. In any case, the two hit it off, despite their occasional “quarrels”.

Margo – with Tolochko’s assistance, we assume – even created her own Instagram account, chronicling their relationship. Again, it gets a bit too risqué for comfort, so we’re not linking to it.

However, the online publicity brought with it some undesirable consequences.

“When I presented her photo to the world, there was a lot of criticism and she began to develop a complex,” Tolochko said according to LadBible.

Look, just don’t ask us to explain any of this, okay?

Anyhow, Margo seemed happy with the operation. So much so that when Tolochko popped the question to her in December 2019, she said “yes.”

We’re sure she did.

The marriage didn’t start off easy, though. They originally scheduled the wedding for March 2020, but then the coronavirus struck.

Like so many flesh-and-blood couples, the two had to postpone the ceremony. They set a new date for later in the year, but the wedding had to be pushed back again after Tolochko got attacked by a thug at a transgender rally at the end of October.

But finally, on November 28, 2020, it happened. Tolochko and Margo the Sex Doll tied the knot, and their marital bliss could finally begin.

And it lasted for a whole month and a half. Talk about a whirlwind marriage.