What happens if you scare a small lizard? It’ll likely drop its tail to distract the supposed predator and run off.

But as we all know, it doesn’t really hurt the lizard. Before too long, the reptile will have grown a brand new tail. It might look a bit funkier than the original, but it works just the same.

There seems to be some kind of a natural limit on the reptilian regenerative ability, though. After a certain size point, they will not be able to regrow their tails or limbs. It’s probably something to do with the immense amount of energy needed for the process.

Or that’s what they thought. It turns out that reptiles as big as alligators are able to regrow their severed tails.

A new study carried out by a research team from the Arizona State University (ASU) has found out that young alligators are able to regenerate their tails. And not just into a small nub either – the new tail can grow up to 18% of the juvenile animal’s total body length, or three-quarters of a foot.

The discovery means that alligators are now the largest animals known to regrow severed limbs. Not only that, it could have interesting implications for medicinal science. 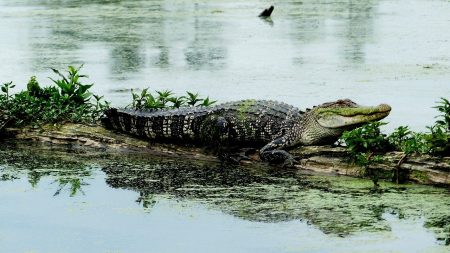 The science team’s research efforts kicked off in 2017. And it all began with a postal package.

Biologist Kenro Kusumi studies reptilian regeneration at the ASU, reported National Geographic. In October 2017, he received in the mail a sample of a tail unlike anything he’d seen before.

It was an alligator tail with some curious deformities. It was discolored, with a forked tip and abnormally small scales.

To Kusumi’s expert eyes, it had all the signs of a reptile tail that had regenerated from a severed stump. But this was an alligator tail. They couldn’t regrow their limbs, could they?

With a slew of questions swarming in his mind, Kusumi whipped up a research team and set out to look for answers.

“We were excited. We knew we had something really cool here,” the study’s co-author and fellow biologist Jeanne Wilson-Rawls.

In addition to the original sample, the team managed to acquire three other alligator tails showing similar deformities. They examined the tails through x-rays and magnetic resonance imaging, but they also got down and dirty and dissected some of them.

Their results showed that we had been wrong with our assumptions about reptile regeneration. The researchers found that alligators fall somewhere between mammals and lizards with their regenerative ability.

“What makes the alligator interesting, apart from its size, is that the regrown tail exhibits signs of both regeneration and wound healing within the same structure,” said Cindy Xu, an ASU PhD graduate. 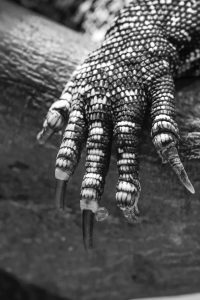 “Regrowth of cartilage, blood vessels, nerves and scales were consistent with previous studies of lizard tail regeneration from our lab and others,” she added.

But what the alligator hadn’t regrown were skeletal muscles. These muscles attach to the skeleton and make it possible for us to move our limbs.

The lack of this muscle is interesting to the researchers, considering how important their tails are to alligators. The tail helps the animal maintain balance and propel itself through water.

Xu theorizes that the alligators don’t grow these muscles because – as we mentioned earlier – it would consume incredibly amounts of energy.

“The regrowth of tissue is very energetically expensive. If you’re putting all of your energy into regrowing a structure perfectly, you’re deviating energy away from other more essential processes such as developmental growth,” she said.

This might also be why alligators seem to stop regenerating their tails when they mature. It will help a young, still developing ‘gator avoid predators, but for an adult would simply be too expensive energy-wise.

A case in point, an alligator by the name of Mr. Stubs got a prosthetic 3D printed tail in 2013.

But does that really mean it’s impossible for adult ‘gators to regenerate a tail? Although the researchers have no samples or recorded cases of adult alligators regrowing limbs, they don’t say that it couldn’t happen.

“Our collaborators have not seen a full-grown adult with a big regrown tail, but it doesn’t mean that they’re not out there,” Kusumi said.

But there’s something about alligators’ regenerative abilities that could be quite interesting to us humans. Namely, it might open up new medical possibilities.

All animals – including mammals and, yes, humans – are capable of limited regeneration. That’s what we call wound healing.

We can regrow skin and skeletal muscle, even some organs, but that’s where it stops. No mammal (that we know of) can grow new bones or regenerate lost limbs.

But the researchers are now asking whether it really has to be so. If animals as large as alligators can regenerate limbs, why couldn’t we?

“We know that humans – who are incapable of regenerating – have the same cells and pathways being used to regenerate in these other animals. If this very large, long-limbed animal has this ability, can we take advantage of this to help people who have lost limbs or burn victims who need skin regeneration?” mused Wilson-Rawls.

It will require a lot more research, but maybe we could learn from the ‘gators. And perhaps in the future, losing a limb won’t necessary be such a big deal anymore.