It’s hard to imagine a world without the piano. It has been an instrument of musical expression for centuries, and its rich history is filled with interesting stories. The first person who tried to make the piano was Bartolomeo Cristofori in 1698. The sound that comes out of it is made by hitting strings with hammers when you press keys on the keyboard. These are called “notes” or “keys” because they play notes when you hit them. 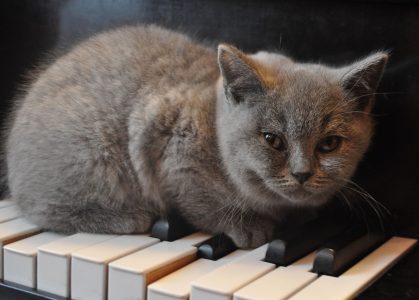 Notes can be played together, one after another, or all at once depending on what you want to do musically—all these things are determined by how fast your hands move over the keys!  One thing that makes pianos unique is that they can play notes at different volumes. Here are interesting things to note about this musical instrument.

The Piano Used To Be Called A Pianoforte

The word “piano” is a shortened form of the instrument’s full name, pianoforte. The original name was a combination of Italian words meaning “soft” and “loud,” which is fitting because those two words describe how this instrument works—hitting the keys on it makes it produce loud notes or soft ones.

When you hit a key on the piano, this is what happens:

– A small cloth called a “hammer” inside the instrument hits another string made of wire wrapped around metal tubes. The metal helps make these notes sound bright and crisp!

– When you release your finger from the key, it makes a small piece of wood called a “lever” move back and forth. This helps the hammer go back to its normal resting place, so it can hit the wire string again when you press another key.

Most Grand Pianos Have Over 200 Strings

The more strings a piano has, the larger and louder than it can be. The largest grand piano in the world has more strings than an ordinary one! Why is that? Because they need to produce more sound for bigger spaces like concert halls.

A normal piano has 88 keys (which is what we refer to as “keys” or “notes”). They are split into groups called “octaves.” Each octave has 12 notes and each note is named after a letter name which is seen when a new piano sheet music is downloaded. The first octave begins with the note A.

Other pieces of furniture using strings that sound like pianos are harpsichords and clavichords. A harpsichord has strings on both sides of the piano keyboard, and it’s played with a quill instead of fingers. A clavichord is like an electric guitar—you hit buttons on either side of one string to make it go off.

Pianos Used To Have Ivory Keys

Ivory was used to make the keys on pianos for a while because it was easy to shape into different shapes. However, ivory is very expensive and rare, so sometimes animals had to die in order for people to have enough of this material. As you can imagine, animal rights activists weren’t too happy about this. Ivory keys eventually became too expensive for manufacturers to make, so people started using plastic instead.

That is the material most white keys are made out of today. Some piano designers actually like having ivory keys. The invention of plastic, and the discovery of how to make it look like ivory (by mixing two chemicals together) saved animals from this fate.

Pianos get worn out over time. The high strain of playing this instrument every day can make keys stiff and even break strings. Depreciation is the word used to describe how much an item like a piano loses its value (because it’s not worth as much anymore) with each passing year. After enough years, pianos become irreparable, and they often end up in landfills.

However, most pianos are designed to last about 100 years. A piano’s parts can be replaced (strings with strings, etc.) but it still won’t be worth as much if you tried selling it second-hand. This is because of things like the wood getting worn out by the many times it gets pressed, and other parts breaking down because of regular use.

It’s Not a String Instrument, It’s a Percussion Instrument

The idea that the piano is a string instrument goes back to how it used to be built—with strings on both sides of its keys. However, pianos no longer have all their strings exposed, and it’s not because of market demand. You could say that pianos are actually a kind of percussion instrument, like a drum. The individual notes are hit by hammers on the inside and then resonate with metal tubes and other parts to produce a sound that comes from the vibration created.

The word “percussion” is a term used to describe instruments that make noise because of things hitting other things. Percussion instruments don’t have to be the type of objects you hit with a drumstick, even though a piano can also be played by hitting it with a hand or a stick, which is called “poking” the instrument. In fact, if you didn’t know already, pianos are very similar to some percussion instruments. Instruments like xylophones and drums are based on pianos.

Pianos are complicated instruments! The basic parts include the keyboard, legs, frame, and case. There is also a pedal system that rubs two small wheels together to add new notes when you press down on the keys. The hammers inside the piano can be different sizes depending on where they strike certain strings with their little “nails.” The strings can also be set up to produce different pitches with “screws” that tighten the high ones and loosen the lower ones. There are so many parts in a piano, yet buying one is still an investment—you buy it once but use it daily!

Pianos are a very complicated instrument. They have over 12,000 different parts that come together in order to produce the sound of this beautiful instrument. But pianos don’t just make music for us on their own—we need to play them first! The more you know about the piano, the better equipped you will be when it comes time to buy one for your home or business establishment. We hope our article has helped with informing readers about some interesting facts they may not have known before reading today’s post.