Most airplane hangars are merely practical facilities which serve to house various aircraft. Unless you have a special interest in aviation, you probably don’t think much about them. 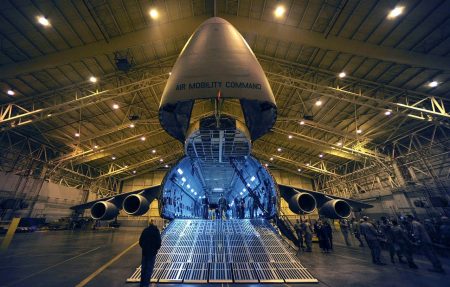 However, some airplane hangars are so unique that even those who generally aren’t interested in the topic enjoy learning about them. Consider the following examples!

Not all hangars are immediately recognizable as being storage spaces for aircraft. There are various hangars that are difficult to spot if you’re not looking for them. Some of them may even be intentionally disguised for military purposes.

That’s one explanation some have for the hidden airplane hangars in Switzerland. In some parts of the country, hangars are essentially hidden inside of mountains, with fake rocks, shrubbery, or stone facades hiding them. The roads near them can be converted into makeshift runways when pilots need to take off or land. Additionally, sections of Swiss highways can become runways when necessary.

Most pilots wealthy enough to own their planes tend to keep them in hangars owned by others. However, some of these hangars are designed to look like personal homes. Some even are homes!

For example, in Peyton, Colorado, you can find a Mediterranean inspired villa on a 2.5 acre lot featuring an adjacent hangar that the home’s owner can reach without ever actually going outside.

Silverwing, in Sandpark, Idaho, is similar. Residents of this development have easy access to a nearby airpark and can even store small planes in their own garages. Even James Bond would be jealous.

Most airplane hangars are relatively large structures. They have to be in order to store planes, after all.

However, Hangar One, in Mountain View, California, is particularly massive. Covering eight acres, it’s among the largest freestanding structures in the world. Its size is due to the fact that it originally served as a naval airship hangar. Now it belongs to NASA’s Ames Research Center.

Goodyear Airdock is a similar structure. When it was first completed in 1929, it was the largest structure in the world without interior supports. As the name implies, it was built as a hangar for Goodyear zeppelins. Along with its size, it’s well-known for its unique shape, which some have compared to a silkworm’s cocoon cut in half.

Hangar 7, in Salzburg, Austria, was built by the founder of Red Bull as a hangar for the Flying Bulls, a fleet of unique aircraft owned by devoted pilots. It earns a spot on this list thanks to its interesting glass-centric design, as well as the fact that it may be one of the few hangars in the world with its own attached restaurant where various high end chefs serve up meals throughout the year.

This famous hangar is now a cruise ship terminal. However, when it was first built, it served as a hangar for the Spruce Goose, Howard Hughes’ famously massive aircraft. As such, the hangar itself must also be extremely large, making it an iconic structure that remains the subject of much attention to this day.

Those are just a few examples! They highlight a point many forget: an airplane hangar’s main purpose may be aircraft storage, but that doesn’t mean it can’t be an interesting structure on its own. These noteworthy examples are proof.