You might think decapitating goats as part of a religious ritual is something that only happens in horror movies. If that’s true, then Georgia has been ripped from Earth and dropped into a Hollywood gorefest.

Locals living by the Chattahoochee River, which runs through Georgia, made a gruesome discovery on August 27. On top of the usual varieties of aquatic life, a new kind of animal appeared in the river — headless goats.

And we’re not talking about just one or two goats. People noticed a herd of around 30 decapitated goat corpses floating down the stream.

Jason Uhlselth from the environmental group Chattahoochee Riverkeeper told Channel 2 Action News that the goats were found near the I-20 bridge crossing the river.

“On Friday [August 27] we were out here and saw 30 of them floating down the river,” Uhlselth said.

One local even managed to catch the dumping of the goats on video. According to Uhlselth, the video shows the splashes as the corpses plummet into the river.

This isn’t the first time people have discovered headless goats in the Chattahoochee, either. Over the years, more than 200 decapitated goat carcasses have ended up in the water.

“Over the past couple of years, I’ve seen a couple hundred, but never more than 20 to 30 at one given time like we’ve started to see here lately.”

He added that the local who shot the video of the goats being dumped can often hear it happening — even in broad daylight. 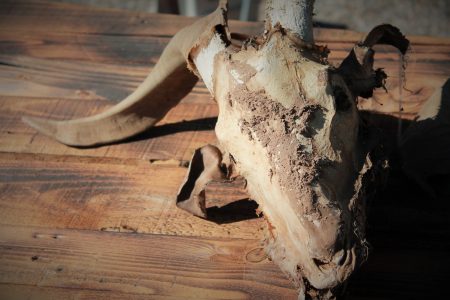 The Headless He-Goat of Victory

So what exactly is going on in Georgia? Has a Satanic, goat-sacrificing cult taken root in the state?

Well, not quite. That said, the main suspect is an unconventional religious group.

Although there are no official police investigations ongoing (at least yet), most people are pointing their fingers at a local community practicing Santeria. It’s a syncretic religion that arose in Cuba in the late 19th century, mixing elements from Roman Catholicism, spiritism, and the West African Yoruba religion.

Santeria is a ritualistically oriented religion, meaning that the proper execution of rituals is more important to its practitioners than faith in one rigid dogma. And one of the Santeria rituals is animal sacrifice.

The Santeria faithful don’t try to hide their sacrificial practices. And why would they — in their eyes, it’s all part of their perfectly valid religion.

Priest Akinton Shingods Anjoula told Channel 2 Action News that the sacrifice of a male goat is done to celebrate victory, whatever that may be. A female goat, on the other hand, can be sacrificed on behalf of someone wishing for children.

A History of Sacrifice

This recent spate of goat sacrifice isn’t the only time the Santerians have caused public hubbub with their sacrificial practices. In 2019, reports started surfacing of them leaving decapitated chickens, goat heads, and coconuts by railroad tracks in the Atlanta Metro area.

A retired train conductor said that he’d seen thousands of instances of animal parts laying by the tracks. That’s despite the fact that under Georgia law, doing so it’s a crime.

“In sacrifice, we can use rooster, hen, pigeon, goat, snail, [any] kind of animal,” Ajale said. Although the variety of Santeria he follows doesn’t leave animal corpses on railroad tracks, he knew why it is done.

According to Ajale, the ritual gets rid of evil spirits. The spirits are bound to the sacrificed animal and the passing train blows them away.

Although leaving stuff on train tracks is a crime, Santerians’ sacrificial practices aren’t. In 1993, the U.S. Supreme Court upheld a Santeria church’s right to animal sacrifice in Florida under their religious freedoms.

But legal as the goat sacrifice in Georgia might be, dumping the carcasses into the Chattahoochee might be a different matter, said Uhlselth. The Santeria practitioners might be running afoul of environmental protection laws.

“This is drinking water for five million people, and we all have to do our part to take care of it,” Uhlselth said.

In all fairness, he’s not talking only about the goats. Locals are dumping everything from plastic bags to TVs into the waterway.

There’s also the question of where are the hundreds of goats coming from. At the moment, nobody knows of any large-scale sacrificial goat farms.

“These goats have to be coming from somewhere, but we haven’t been able to determine who’s buying the goats, who’s providing the goats or actually how they are making their way here in the river,” said Uhlselth.

For the time being, if you live in Georgia and feel like going for a swim in the river… You might want to check for headless goats before you hop in.