The holidays are fast approaching and some people are happily dreaming of a white Christmas. Who doesn’t love making a snowman?

The holidays are some of the most exciting and joyful times of the year, yet you would be surprised by how many people make it scary! Just take a look at some of the disturbing ways people showcase their weird holiday spirit with the oddest of snow people.

Take a look at some of the most disturbing snowmen and snow displays we found:

Seeing this at the side of the road can be quite disturbing. It looks like this snowman is hungry for little children, devouring a child that is almost its size. Clearly this snowman has the appetite.

Imagine seeing this one at night. Seems more Nightmare on Elm Street than Merry Christmas. 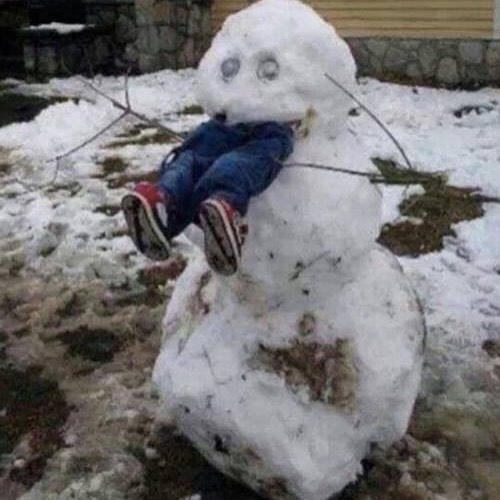 Dead people rising up from the grave is pretty scary and not a scene most people would think of creating when it snows. You don’t hear a lot of kids shout “Hooray, it’s snowing! Let’s got to the cemetery!”

Yet here it is, amazing artistic quality, interesting use of snow, yet very disturbing to look at. 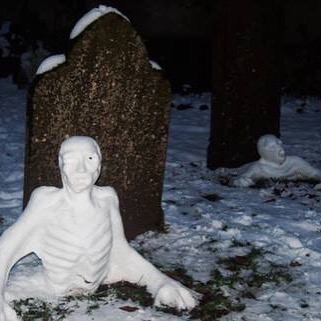 Whoever made this snowman has a sick sense of humor. This “impaled’, bleeding snowman is as disturbing as anything I have ever seen.

Kudos for creativity-making use of an electrical post this way. 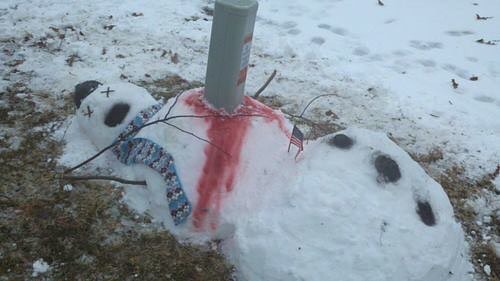 At first glance, you would absolutely get goosebumps looking at this snowman. Especially at night, when goblins and other creepy mythical creatures might linger around your neighborhood.

The details on this snow-creature are amazing. Whoever made this one is talented, though maybe a little disturbed! 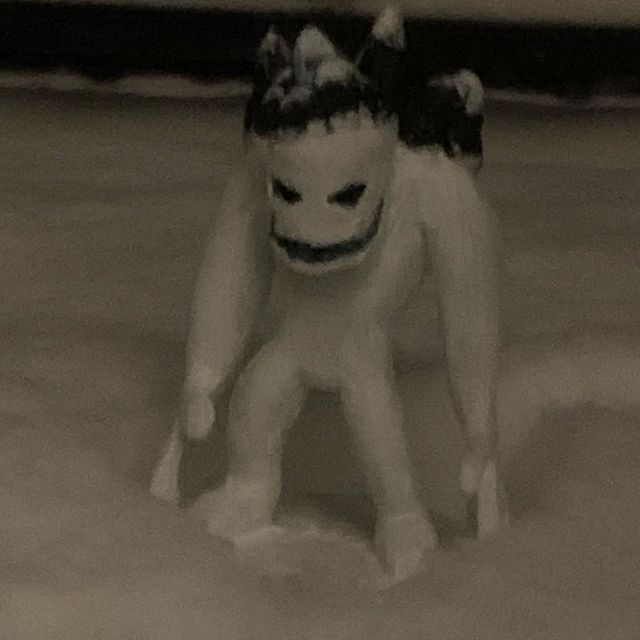 It seems like this snowman has been exposed to radiation, turning it into a mutated monster with glowing green eyes.

What is more disturbing, perhaps, is the rat skeleton friend this monster is hanging with. Where did that come from? 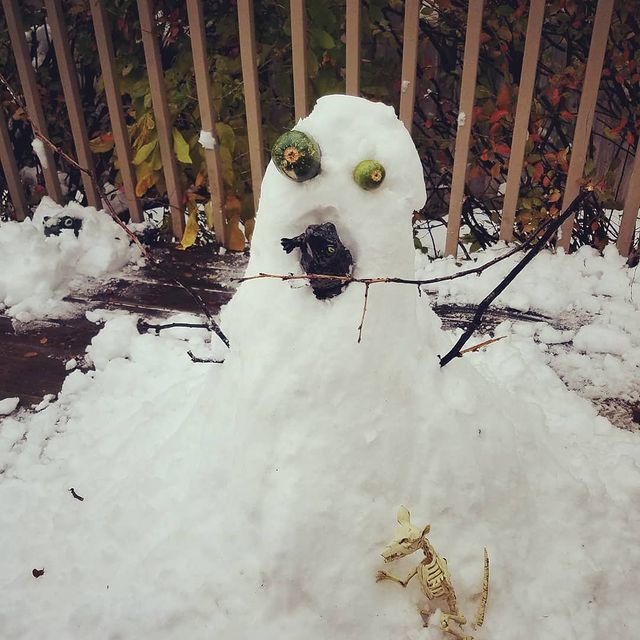 One of the most lovable characters from the Disney movie “frozen” is sweet, funny Olaf. Here, however, someone turned him into an evil snowman. It is very disturbing to see him without that classic smile on his face.

The kids should steer clear of this one. We just hope that the power of Elsa can bring back the good old goofy, smiley, and lovable Olaf. 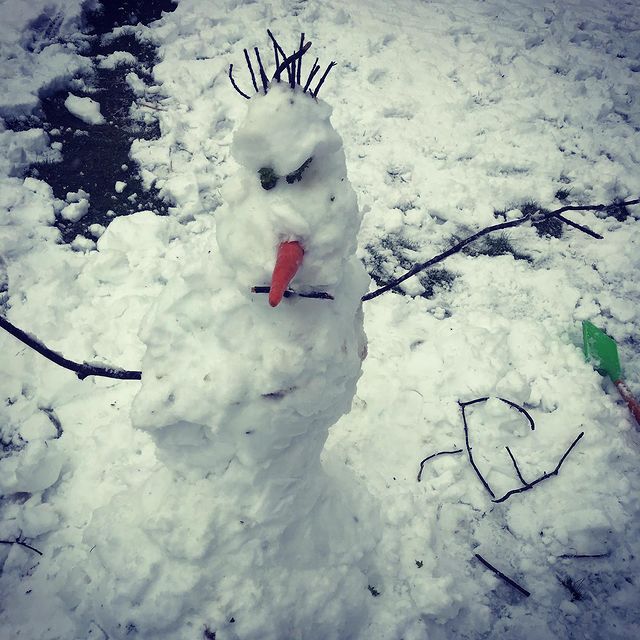 I can’t even imagine encountering this terrifyingly large snow dog. Imagine that you went hiking in the woods, and saw this? He looks enormous, like he could squash anyone who walked by! 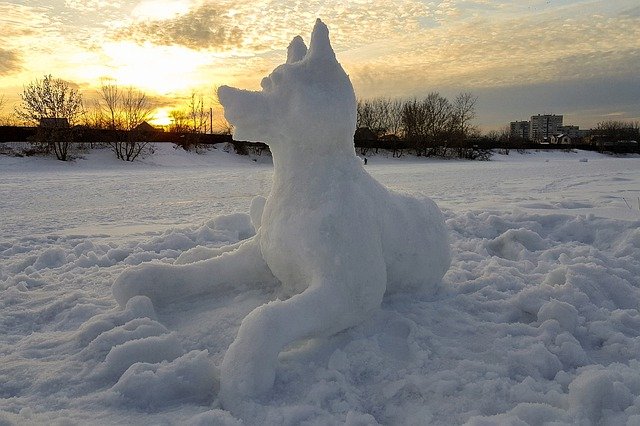 At first glance you might see this one as a chill snowman. But the more time you spend looking at it, the more chance you’ll get mesmerized by his creepy featureless face. (Which, even though it has no features appears to be mocking me.)

And what is he looking at? Is he staring directly into the sun? Disturbing and stupid. 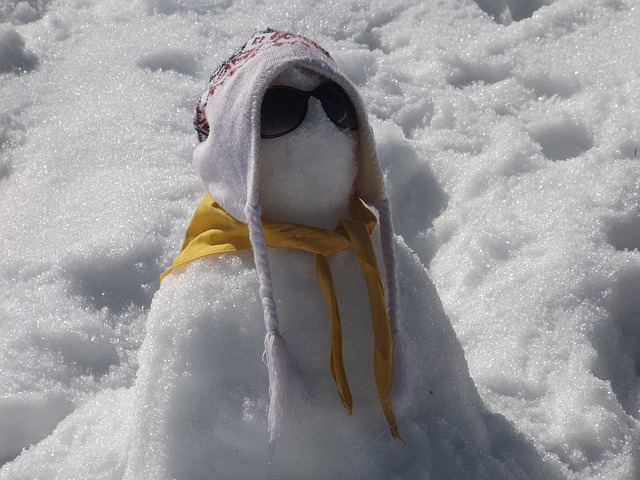 This is the abomination. He is most disturbing and looks like he hates everyone – Oscar the Grouch of snowmen.

This snow creature is clearly spreading misery instead of joy this holiday season. 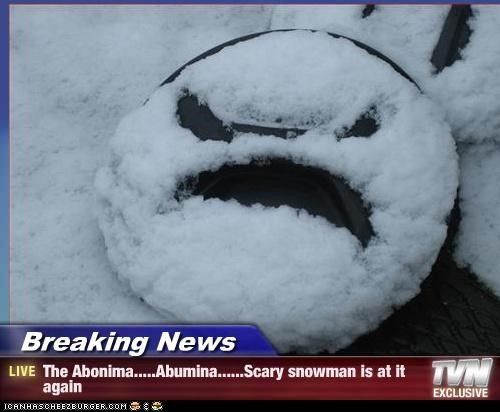 This family is one motley crew of snow people. It is hard to tell if they have been attacked, are on the run, or just a plain mess. Between the purple hair, the single eyes and the carrot noses on the ground, this makes for one disturbing snow family. 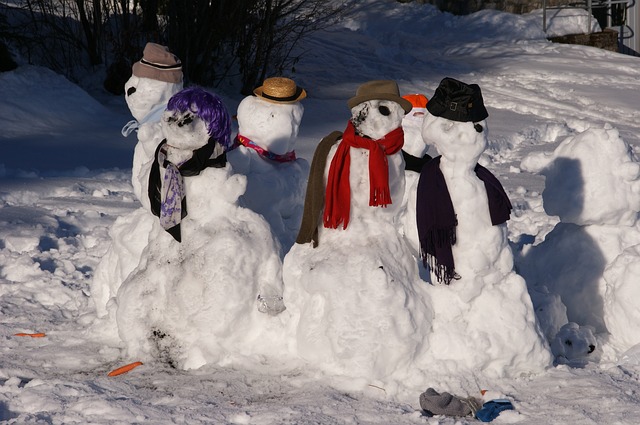 Run for your life! These snow people are getting attacked by zombies. The looks on their faces, the open mouths-you can almost hear the screams.

The blood really takes it over the top as does the snowman who has lost his entire lower half. 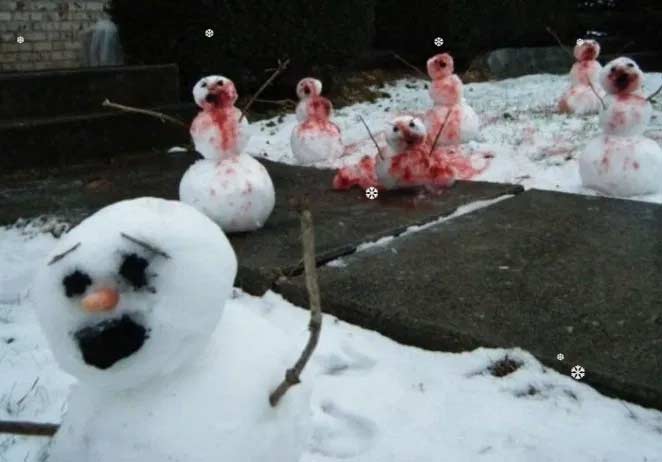 I can’t imagine who thought of this disgusting scene of a snowman spurting blood into the eye of another. 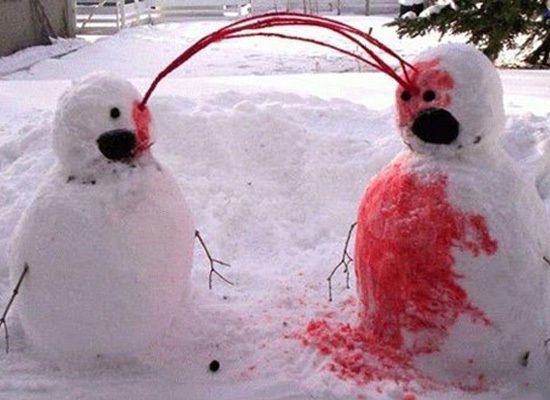 These creatures remind me of the movie “Aliens.” Do you remember the scene where the creatures pop out of someone’s stomach?
I assume the weirdo who made these snow monsters was a fan.

What makes it worst is there are two of them. Making the trouble into double! 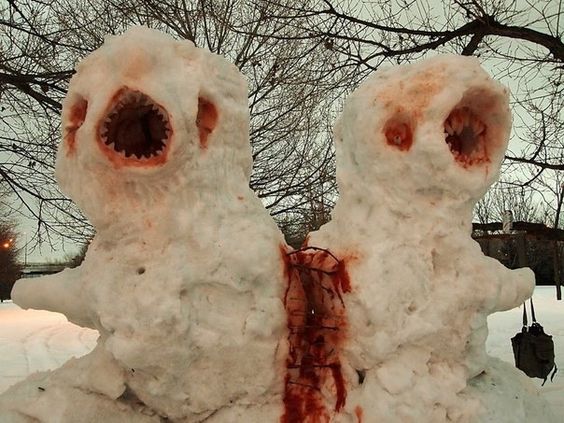 Clowns are creepy enough on their own! Who knew a snow clown would be even creepier?

I hope you will still have happy holidays after looking at this one! 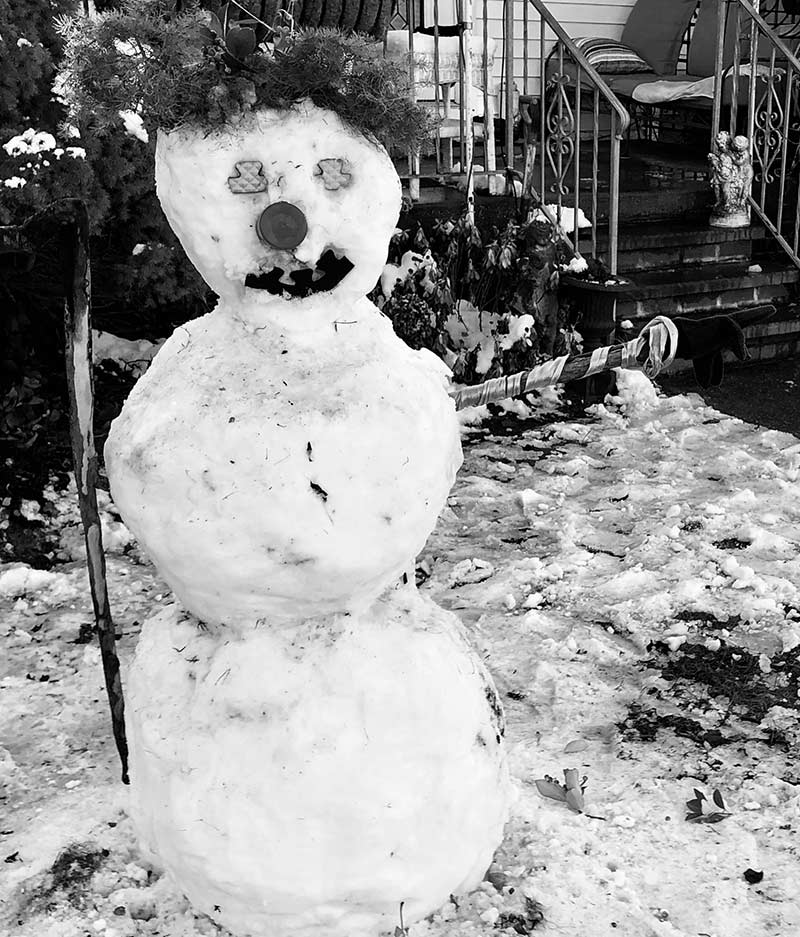 If this was real it would be a horror. This poor snowman has been caught by a village of small ones, tied up and tortured!

Someone very disturbed took the cute and innocent idea of building a snowman to an entirely too-creepy level. 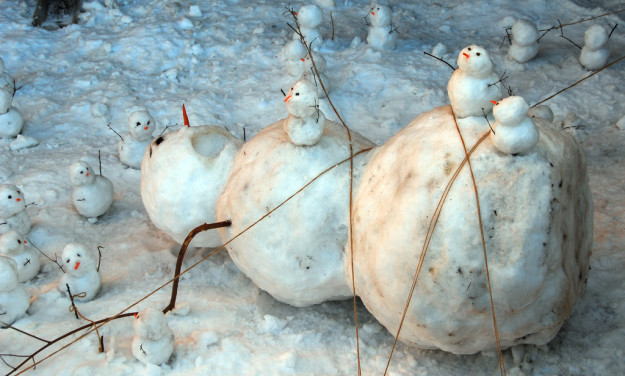 Imagine this horror happening in real life! How gross and sad. These poor snow people on the side of the road watching as their loved one is run over and decapitated!

I hope whoever made this grisly scene wasn’t recreating a memory! 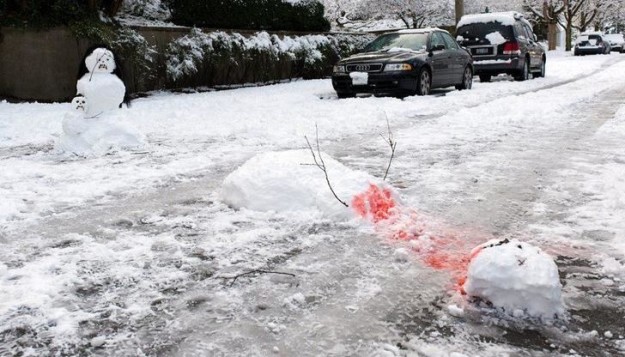 This guy looks like he had been through a lot. Maybe he has taken a long drive just to arrive out in the middle of nowhere.

He does resemble a hit man who might kill you out there. Hope he brought a shovel. 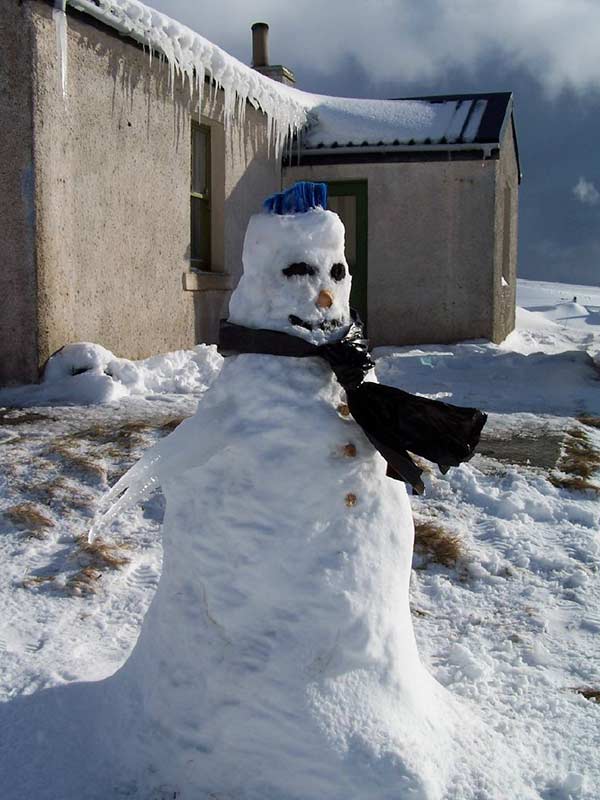 This snowman is being eaten by others. The look on his face is of pure agony while the little ones delight in their meal!

Ew. This one might be the most disturbing yet. I would not want to meet the person who created this. 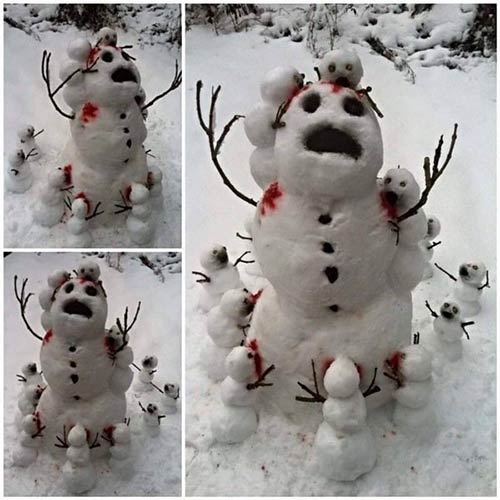 Looks like this little guy right here just went on a killing spree. Just one look at his face and you can see that he is thirsty for blood.

The blood trail at his back just shows means he just feasted on something (or someone). He looks pretty eager to get more blood. 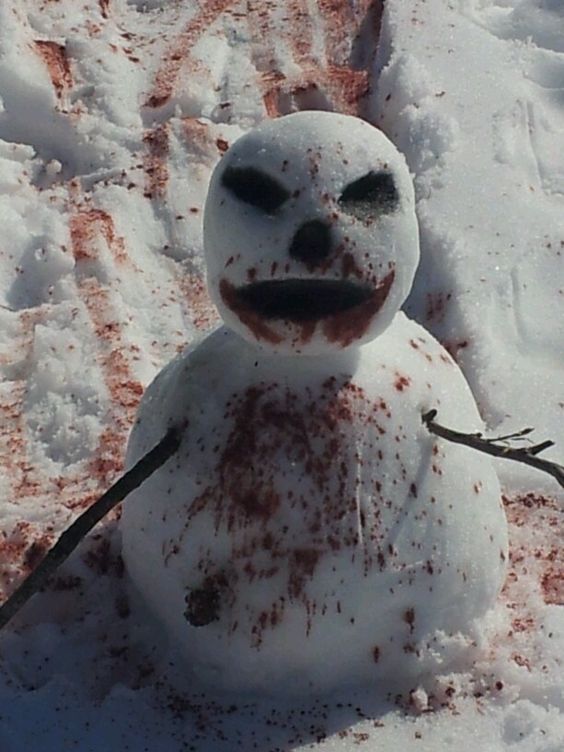 In the middle of nowhere with glowing eyes, these snow ghosts would scare anyone.

They look like they are on the move, perhaps invading a town of innocent victims or a farmer and his family! 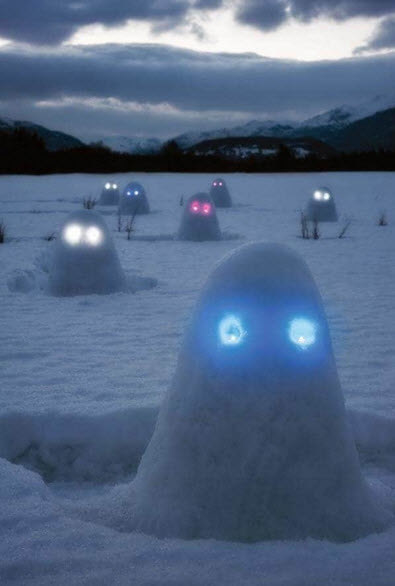 These are the most disturbing snowman we have seen. It takes a lot of creativity, talent and weirdness to create such odd winter scenes!