We’ve never seen an elephant rampage and, frankly, we don’t want to. It doesn’t sound like a good time for anyone involved.

Unfortunately for the residents of Yunnan Province in Southwestern China, they’ve had to deal with one for a couple of months now. A herd of 15 wild Asian elephants has blazed a 500-mile trail of destruction through the province.

A 16-member elephant herd left their home in Xishuangbanna National Nature Reserve in southern Yunnan on April 16. Two older elephants soon decided they weren’t up for a road trip and returned home, but the others pressed on.

One of the traveling elephants had a calf on the way, bringing the number of prowling pachyderms to 15. It sounds like the elephants are on a fun little journey, but they’re not too careful about where and how they travel.

Over their two months on the run, the elephants have destroyed 138 acres of crops and caused more than $1 million in total damages. Luckily, they haven’t hurt any people. 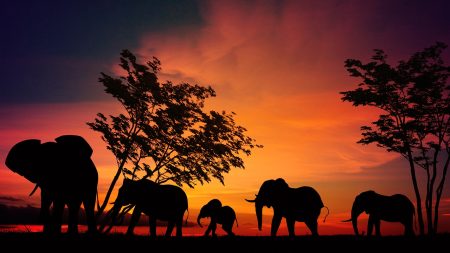 Locals have been trying to guide the elephants away from residential areas by blocking roads and enticing them with food. However, that has only worked only on the animals’ terms – most of the time they just ignore the people.

Their travels have taken them through several major cities. In late May, they arrived in Yuxi, a Yunnan city with more than two million residents.

Over their six-hour stay in the city, the elephants got up to some mischief. They broke into barns and ate out of dumpsters before discovering and demolishing some farmland.

A local tire shop keeper, surnamed Jia, witnessed the elephants as they entered the city’s outskirts. He first spotted them through his store’s window.

“It was around 10 p.m. and I was still in my shop. I heard some noise on the street, and I looked out – wow, elephants!” Jia reminisced.

Despite being slightly scared of the huge animals, Jia went out on to the street to take a closer look. You don’t often see wild elephants roaming through the city, after all.

“I was so curious. The nearest elephant was only a few [yards] away from me,” said Jia.

However, both local and national governments have told people to do the exact opposite of what Jia did. They’ve warned people to stay away from the animals and not to “closely watch, tease, hurt or maliciously drive them away.”

“[Asian elephants] may attack humans out of defensive instinct when frightened,” warned the government of Eshan county, where Yuxi is located.

Experts are not certain on why the elephants decided to leave Xishuangbanna. They don’t usually start traveling north at this time of year, since food is scarcer in Yunnan’s northern mountains and woods.

Zhang Li, a professor of ecology at Beijing Normal University, think that the elephants could be looking for a new home. Their rainforest habitat is shrinking, and they could’ve felt it’s time to find greener pastures.

“Another possibility is that this elephant herd lost their way during a march because of the shortage in experience of its leader,” Chen Mingyong, a professor at Yunnan University School of Ecology and Environmental Science, said.

Whatever the reason for their migration, the Chinese authorities would love it if they returned home. The government has set up a task force of 360 first responders, 76 cars, and nine airborne drones to monitor the elephants.

So far, however, the task force has been unable to stop the elephants. Their march continues, and they’re getting dangerously close to Yunnan’s provincial capital, Kunming.

It’s understandable that the government wants to stop them before they get to Kunming. After all, the COP15 United Nations Biodiversity Conference is supposed to take place there in October.

Some users on the Chinese Weibo social media service have quipped that the elephants are clearly on their way to attend the conference. And if their rainforest home indeed is shrinking, they have a good reason to do so.

“Welcome to the ‘elephant delegation!’ Have a nice trip and be friendly to us humans,” one jokester wrote.