Getting Stung By Bees 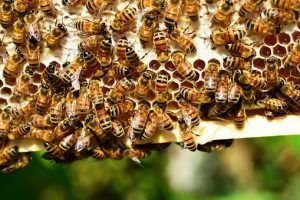 Now this is a hard no for most people. Some are deathly allergic to bee stings. But one thing is for certain, most hate to get stung by a bee. Even without an allergic reaction, lots swell up, itch, and generally hurt like Hell. But, like anything else, some people are addicted to it. Yup, addicted to giving themselves bee stings. A woman in her 50s gets bees to sting her in her elbows, hips, ankles, fingers, forehead, and nose. “The most I’ve ever given myself is between 15 and 20 on my left hip,” she admitted. She’s been doing this for 10 years in hopes that it would ease her arthritis pain. But since starting, she’s gotten used to the pain and it “got easier every time.” Ok, but does it even help your arthritis?

Want to tell your strange story? Tell us about it and it could be featured on Oddee. You can remain fully anonymous.
Submit Story
prev
Page 5 of 7
next