It’s a sign of the times, seeing this banner calling out tenants on not paying their rent, or is it? The landlord of this story is owed over $17,000 in back rent, and after a $100 increase after nine years, feels justified in calling attention to the situation.

The bold banner hangs above the first floor at 175th Street in Springfield Gardens reads, “MY TENANTS ON THE FIRST FLOOR ARE NOT PAYING RENT.”

Cavin and Jean Thompson, the landlords at this location, posted the banner which is visible from the Belt Parkway, hoping to shame their tenants into paying their back rent, including the increase. A video was featured on TikTok garnering more than 14,000 likes and support from viewers with comments like, “Not paying your bills is ghetto.” 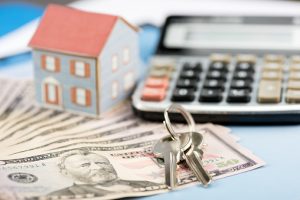 The process to evict Marie and Eugene Lamour and their daughter Kathia began at Queens Housing Court last month, but there are nearly 200,000 eviction cases pending in the city already. And after the pandemic protections and the states crazy backlog of evictions, the landlords decided to publicly call them out instead.

“The signs are very embarrassing and shameful for them,” said the Thompsons’ son, Calvin Jr. “That’s the only voice we have at this stage: freedom of speech.”

The signs are getting the point across, Kathia Lamour tried to cut one down.

“When she calls Uber, she won’t do it in front of the house anymore,” Calvin Jr. said. “She runs to the end of the block, so they don’t see them. It’s uncomfortable that we have to hang these up, but we’re $20,000 uncomfortable, so I think a sign is very minor.”

Problems started after the Thompsons attempted to raise the rent back in July. After nine years, the rent was raised $100.00 per month, from $1800.00 to 1900.00. The Lamour’s were not interested in paying the rent increase and when they offered to pay their original $1800.00 rate, the Thompsons refused to take it, so the Lamour’s stopped paying at all.

Currently on unpaid medical leave from her job since the summer, Kathia says “It’s like all of the sudden, we’re bad tenants. They were bamboozling me into an increase. They went ballistic on me because I wouldn’t give it to them.”

“I don’t think a $100 increase for almost a decade of living is unreasonable,” Calvin Jr. said. “There are plenty of landlords in our situation because of COVID. A lot of eviction cases are backlogged. She knows this and is going to ride this out.”

Both families reside in the same building, separated only by floorboards. The sign is a form of harassment, according to the Lamour’s lawyer, and will only hurt the case she says.