Heavy metal is no stranger to the macabre. Horror, the occult, blood, gore, mutilated corpses, and hell and all its minions are mainstays in both the lyrics and imagery of practically every hard rocking band.

Usually the onslaught of terror stays in the realm of fantasy. Most heavy metal groups use fake props to create their gruesome image.

But then there are some who engage in more extreme antics. One of them is Tampa, Florida-based guitarist called Prince Midnight, who constructed a custom guitar out of some unusual parts.

Namely, the body of his new guitar consists of his late uncle’s actual ribcage, spine, and pelvis.

And the guitar isn’t just some stage prop, either – it actually works. Just watch this video of Mr. Midnight playing a cover of black metal group Darkthrone’s song “Transilvanian Hunger” on his new axe. 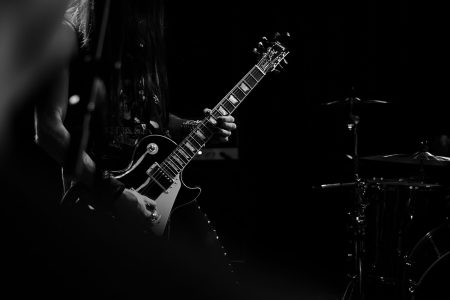 It might seem strange – maybe even disrespectful – to build an instrument out of what used to be a human being. But Midnight’s Filip Skelecaster – a nod to both his uncle’s name and the famous Fender Telecaster guitar – is actually a loving tribute.

You see, Uncle Filip was himself a serious headbanger in his lifetime. He was the one who introduced the Greek-native Midnight to rock music in the ‘90s and sparked his lifelong love of metal.

Unfortunately, Filip died in a motorcycle accident in 1996. He continued the unfortunate rock ’n’ roll tradition of dying young – Filip was only 28.

Filip had requested for his mortal remains to be donated to a local college. For 20 years, his skeleton instructed future medical professionals in human anatomy.

But eventually the school no longer needed Filip’s skeleton. And that’s where the problems began.

“He ended up in a cemetery my family had to pay rent on. Like, literally in a wooden box,” Midnight told Huffington Post.

The family could ill afford to pay for a burial spot for Filip. However, Orthodox Christianity – the majority religion in Greece – frowns upon cremation, so the family didn’t want to dispose of Filip’s remains that way.

That’s when Midnight took matters into his own hands. Aided by a local funeral home, Midnight had his uncle’s skeleton shipped over to the U.S.

However, to the shock of his family, Midnight didn’t want to pay for an American grave site.

“So, I got the box of bones from Greece and didn’t know what to do at first. Bury them? Cremate them? Put them in the attic?” he told MetalSucks.

None of the options seemed particularly appealing to Midnight. He also thought that his uncle wouldn’t have wanted to fade from history in a traditional manner, either.

And so, he decided to immortalize Uncle Filip in a manner that he too would’ve found satisfactory. Thus began Midnight’s quest to turn the skeleton into a guitar.

“I did a lot of research and no one has ever made a guitar out of a skeleton. So, I did it,” he said.

Midnight’s guitar-playing friends warned him that a bone guitar probably wouldn’t sound particularly good. But he was undeterred – it was the thought that mattered.

Midnight contacted a Tampa guitar shop called Dean Guitars who initially agreed to the project. However, at some point the thought of working on human remains started creeping them out, and they ended up declining to do the work.

It seemed that if he wanted to get things done right, Midnight would have to do it himself. He welded a metal rod to Filip’s spine and attached a neck from an old Telecaster.

He added strings, pickups, volume knobs, and electronics to his uncle’s spinal column. The cord jack juts out from the hip bone.

‘Work of the Devil’

Finally, Midnight was holding a working Skelecaster. But the ghoulish guitar isn’t without its own quirks.

“You have to strum inside the rib cage, so there are no sweeping chords like Pete Townshend of The Who. You can only strum as wide as the ribs will allow. There’s a certain unexplainable quality to it,” Midnight told Guitar World.

In addition to some difficulties playing the guitar, Midnight also had to deal with backlash from his family. His mother in particular wasn’t initially happy with his stunt.

“At first, she said it was sacrilegious and the work of the devil ? you know how moms are,” Midnight recalled. “But I asked her: ‘Uncle Filip was the biggest metalhead out of anybody. Where would he rather be? In the ground or shredding?’”

“She said, ‘shredding.’ Anyways, now Uncle Filip can shred for all eternity. That’s how he would want it.”

Now, wherever he goes, Midnight is sure that his uncle is smiling at him.

“I believe part of my uncle Filip is still there, literally and figuratively. Just a warm presence, maybe enjoying his next life as a totally metal guitar,” Midnight mused.

Rock on, Uncle Filip. Rock on.