We live on a planet where water is in abundance and covers more area than land masses. The sheer vastness of our oceans has inspired thousands of myths and legends from cultures all over the world. Though we live in an age aided by technology, we haven’t really been able to fully explore the world that exists underwater.

Until now, deep-sea expeditions have only been able to cover a fraction of the ocean. Out of the little area that humans have explored, there have been many incredible and unbelievable discoveries.

From wreckages that teach lost history to astonishing living organisms, everything explorers have found so far has been mind-blowing. Here are some of the most incredible things discovered in our oceans. 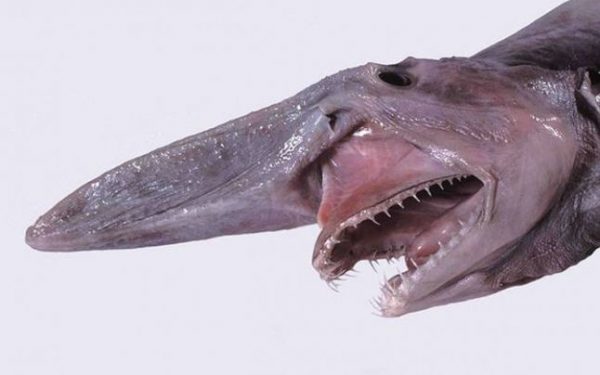 The Goblin shark is by far the most distinct species in its family due to its appearance.

At first glance, it looks like an alien straight out of a science fiction movie. Its snout resembles the shape of a well-forged blade ready to cut anything its path and its jaw houses nearly 35-53 upper teeth rows and 31 to 62 lower teeth rows. When it attacks, the jaws thrust out of its face to catch its prey. The size of the adults can vary between 3-4 meters long, and they weigh about 200 kilograms.

Unlike other sharks, the Goblin shark moves slowly and therefore attacks only unaware prey. Since it's found more at depths ranging from 1300-1370 meters, it has little use for eyes and uses the sand to locate its prey. Though it is not considered to be dangerous, the mere sight of it can give you nightmares. It is also a living fossil of sorts as its ancestry trace back to the Cretaceous period.

Most of its current features strongly point to the primitive characteristics. 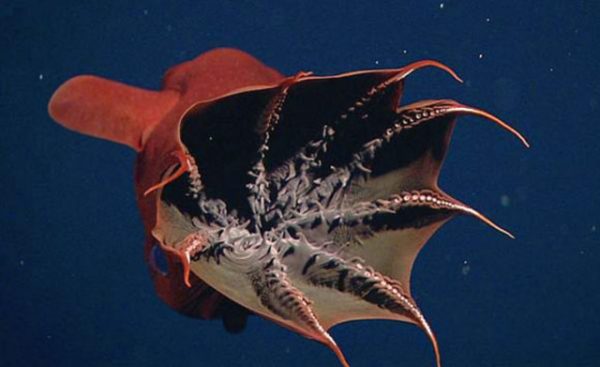 A vampire squid is something you would expect to see in a B-grade horror movie, but underwater explorations have successfully found this horrible deep sea creature alive and well under our oceans.

Despite its name, this squid is small in size. The adult grows to only about 6 inches in length but don’t let the size fool you. It belongs to an ancient species and is the only remaining member of the Vampyromorphida family. It even has light-producing organs which allow it to light itself on and off whenever it wants. Its eight arms are lined with fleshy spines and suction cups.

Since it’s a deep-sea creature, the feeding and reproductive habits of this species are not fully known, but it is believed to feed on small fishes and invertebrates. 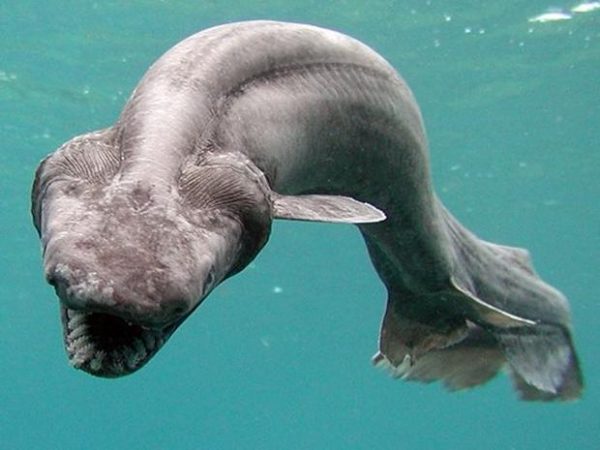 When you think of a shark, a certain image comes to mind fairly easily because it is so iconic. But what if all our perceptions of this prehistoric animal are shattered?

The Frilled shark looks more of a deep sea serpent than a fish due to its unmistakable physical characteristics. There are so many fascinating aspects to this creature such as the way it moves under water. Unlike traditional sharks, this one hovers in the water and is believed to strike its prey like a snake.

Until now, no one has been able to record it feeding so the assumption made by scientists is based more on the way its body is designed. It is typically seen at depths of 390-4200 feet under the oceans and they can grow to a maximum of 6.4 feet. While that size may seem small, do not mistake it to be a docile creature. 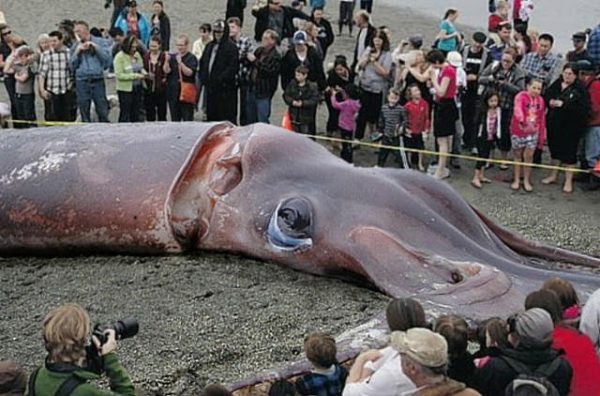 It’s impossible to discuss the world deep under our oceans without mentioning a sea monster. The Giant Squid is one of the largest creatures to be discovered living deep underwater. One look at this amazing creature and you’ll know why people feared the Kraken.

The biggest one found so far reached nearly 59 feet in length and weighed about a ton. The Blue Whale might be a lot bigger but there’s something intrinsically more frightening about a 60-foot creature with eight arms than a docile and beautiful 100-foot long whale.

The Giant Squid has massive eyes that allow them to see other creatures better in the deepest depths of the ocean. Experts believe species might even feed on small whales. 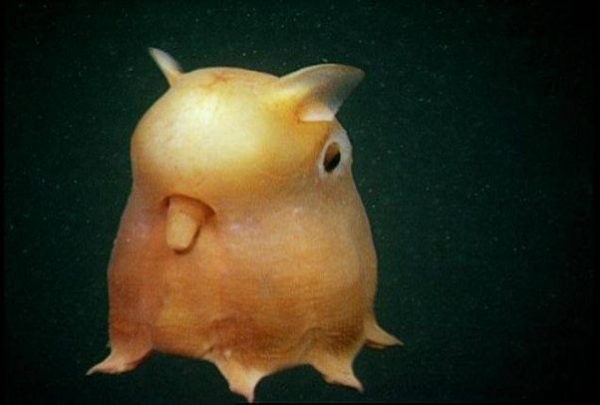 Unlike others in the list, the Dumbo Octopus refers to an entire genus of creatures rather than a single one.

The name covers all the octopuses that fall under the same family of deep-sea umbrella octopuses. They are known to live deep under the ocean at depths of 13,100 feet and below and move much slower than their cousins and use their cute little arms to steer while their tiny fins propel them forward.

Dumbo Octopus forage for small invertebrates and are found very rarely to come into contact with humans.

6The Underwater City of Pavlopetri 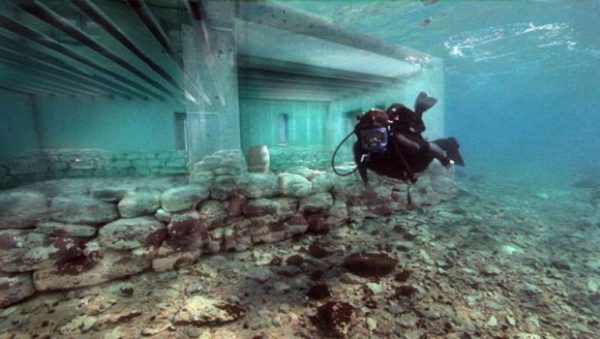 Pavlopetri is a small city that dates back to almost 5000 years and still exists today but completely submerged.

Pavlopetri has roads, houses, gardens, temples, cemetery and even a complicated water management system. Upon further exploration, it was found to span nearly 9 acres and that it is older than “Iliad,” the iconic ancient Greek poem.

The presence of large storage containers spread throughout and Neolithic pottery discoveries led to the conclusion that it must have been a major hub for commerce in its day.

7Underwater River of the Black Sea 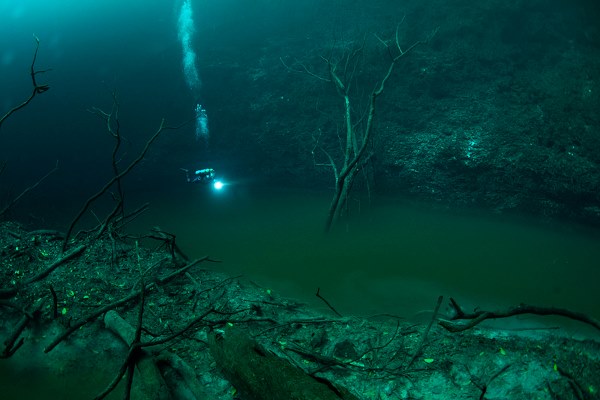 Just when you think the things in the ocean cannot surprise you anymore, it knocks you out completely.

Scientists found the flow of water in terrestrial rivers tends to go round the bend, but in underwater rivers, it’s the opposite. This underwater river flows under the Black Sea has an actual ecosystem surrounded by trees, leaves and even a waterfall.

Taking its size into consideration, if it existed on land, it would have been the sixth largest river in the world.

8The Lost City of Heracleion 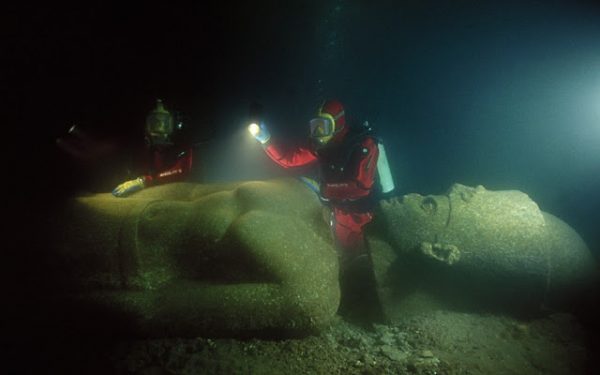 For several centuries, the city of Heracleion existed only in legends and myths. Known in mythology as a city of immense wealth, the discovery of this ancient city solidified the fact it was very much real.

Also known as “Thonis,” it is believed to have disappeared beneath the Mediterranean about 1200 years ago. More than 64 ships were found near the city pointing to the fact that trade was abundant in the city during its heyday. Divers also found massive statues 16 feet high buried in the sand along with several gold coins and other objects of significant value.

At the heart of the underwater city resides the temple to one of ancient Egypt’s supreme gods, “Amun-Gereb.” The discovery shed light on ancient Egyptian culture and life. Experts estimate that at least 200 years is needed to perform an entire excavation of the city. 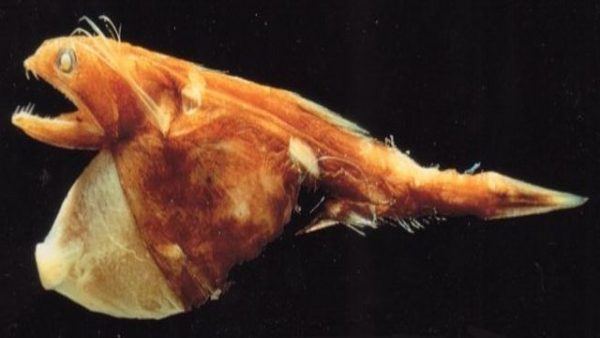 Just as the name suggests, this incredible but scary fish can eat prey several times its size. It is found deep in the oceans at depths ranging from 700 to 2745 meters. They are known to grow to a maximum size of 9.8 inches and have an elongated head and body with no scales and a large mouth.

Its prey is mostly bony fishes which it can swallow as a whole without any problems. The jaws of the Great Swallower articulate with the skull from the front and this allows the creature to swing down further than most other living organisms. 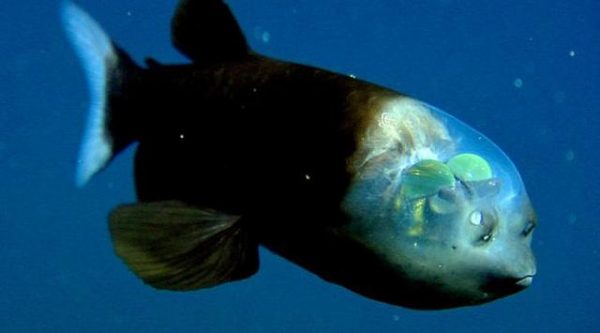 One of the most remarkable deep-sea specimens ever found the Barreleye is one fish that will surprise you. It has a transparent head through which we can see its tubular eyes.

Deep-sea fish have adapted incredibly well to the environment they live in, and the Barreleye is no different. It's believed that the fish's eyes remain static in one place and therefore provides a tunnel vision of sorts for the fish. But recent studies showed that it could very much rotate its eyes within the transparent covering over its head.

Its tubular eyes are perfect for the dark environment in which it lives as it helps in collecting light.