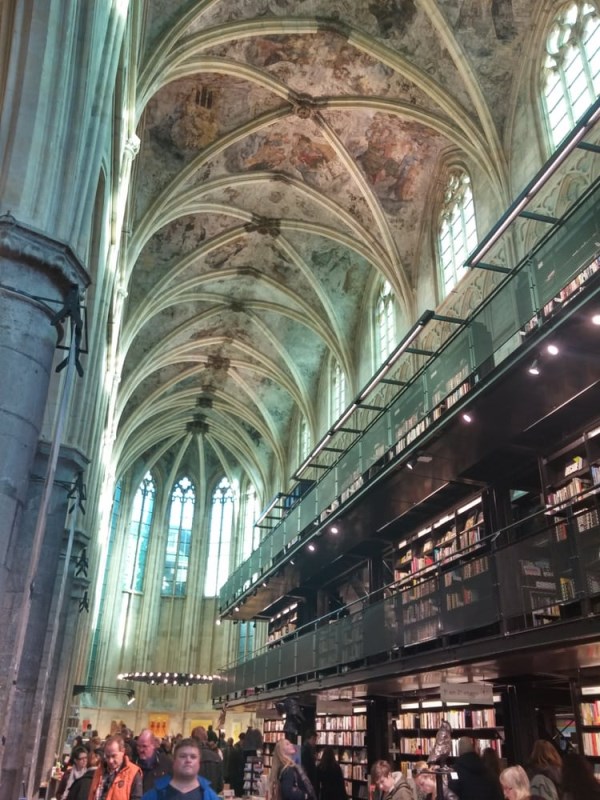 A branch of the popular Dutch bookstore chain Selexyz can be found right inside a 13th century Dominican church in Maastricht, Holland.

Built in 1294, the cathedral features large open spaces boasting three-story bookshelves. Architects at Merkx + Girod fused the old with the new and created a seamless design that integrates a thoroughly modern bookstore within the preserved historic structure. The cafe within the space also pays homage to the bookstore's past-life — there is a long table shaped like a cross, which is conveniently located where the choir formerly situated themselves. 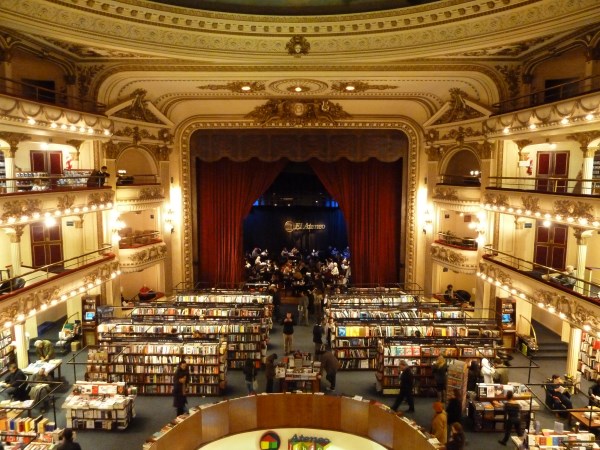 El Ateneo Grand Splendid began as a performing arts theater in 1919 before undergoing a transformation to become a cinema in 1929, with the distinction of being the first in Buenos Aires to show sound film. By the 1990s, the Grand Splendid in disrepair and under threat of demolition due to a weak economy.

It is now thanks to the Grupo Ilhsa — which owns 40 bookshops around Argentina — that visitors can revel in this remarkable monument to a bygone era. The interior of the building remains as stunning today as when it was first built. Plush seating is scattered throughout the shop, the stage houses a café and — how awesome is this? — the theatre boxes are used as reading rooms. 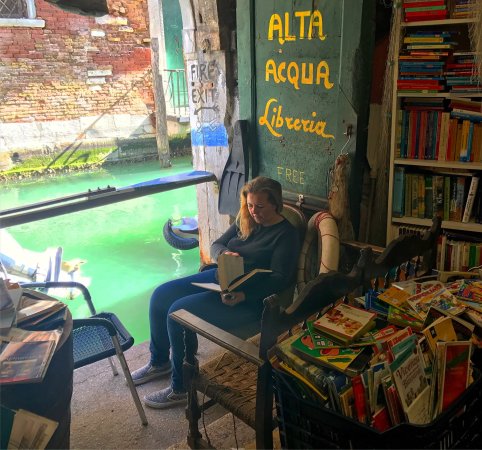 The Libreria Acqua Alta has been called "the most beautiful bookstore in the world." Located in Calle Lunga Santa Maria Formosa, the bookstore not only sells books but also turns them into furniture (there's a book staircase you've got to climb to get a good view of the adjacent canal). Picturesque piles are all placed inside bathtubs, waterproof bins, and — in one room — a full-size gondola, due to Venice's constant flooding. The name itself means "Library of High Water." 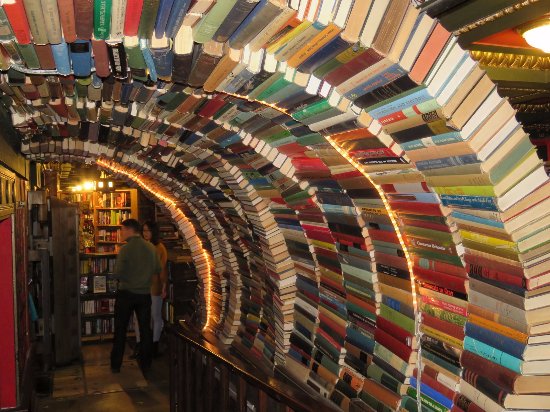 The owners of The Last Bookstore are well aware that the book selling industry is in crisis, hence the store's name, but that hasn't slowed them down.

The store started as an online shop before finding a brick and mortar location in downtown LA in 2005, which it quickly outgrew. By 2009, it settled in its current location — a 16,000 square foot space that once housed a bank.

Everything in the store is broken up into specific genres, and every area is utilized —  even the old bank vault holds crime and mystery titles, which you have to go through an actual vault door to see.

Powell's City of Books spans an entire block in Portland's Northwest quadrant and is so large that visitors find their way around via fold-up maps and large directory boards that resemble the arrivals-and-departures signage at the airport. Used, new, hardcover, and paperback volumes commingle on the shelves, and a system of color-coded rooms and clearly labeled aisles directs browsers in an orderly fashion. The store has a whopping 8000 visitors a day, and there's even a coffee shop within.

John K. King Used and Rare Books is nestled inside an old glove factory in downtown Detroit and is packed with some of the most hard-to-find books in the world. And by packed, we mean there's about a million titles. “We have the first edition Book of Mormon. We have the first edition Federalist Papers. And we have a lot of books signed by famous people like Presidents,” owner John K. said.

The store has four above-ground floors open for browsing, while an adjacent building has a collection of rare and notable items available for viewing by appointment only. 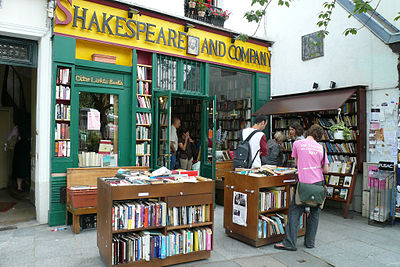 Sylvia Beach opened the original shop, which was forced to close in 1941 during the Nazi ­occupation of Paris, when Beach, along with thousands of others, was interned. In the late '50s, she bequeathed the title to American George Whitman, who lived in the apartment above the store until his death in 2011 at 98. (His daughter, also named Sylvia, has since taken over.)

Shakespeare and Company became a refuge for generations of wandering writers who turned up unannounced to live there. If the “Tumbleweeds" (George's name for them) worked for two hours and read one book every day, he would let them stay for free in the shop, sleeping on cots tucked away between the stacks. He also required them to write a one-page autobiography, often typed on one of the store's typewriters, using sheets of pale blue paper. Shakespeare and Company now has thousands of these testimonies, some even from the children of previous Tumbleweeds. 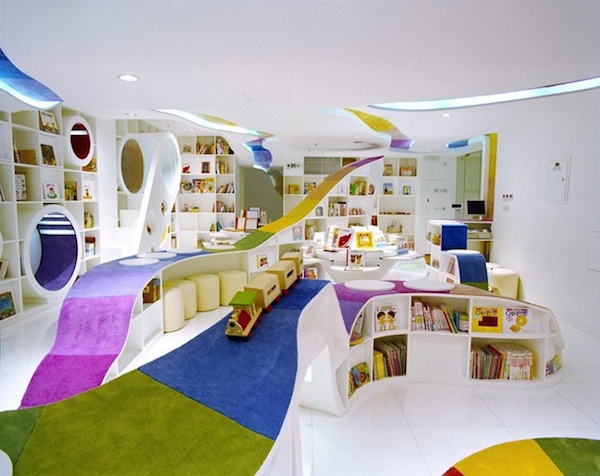 This playful bookstore for children in Beijing not only carries a wide range of books but also provides a fun and comfortable place in which to read them.

The books at Kid's Republic Bookstore are presented in a unique and colorful environment that captures the spirit of reading. To illustrate this process of discovery, a ribbon of rainbow carpet weaves its way around the store, running across the floor, over shelves, and along the ceiling, turning the entire space into a play area. Once a book has been found, kids are welcome to curl up in one of the reading cubbies to enjoy their find. 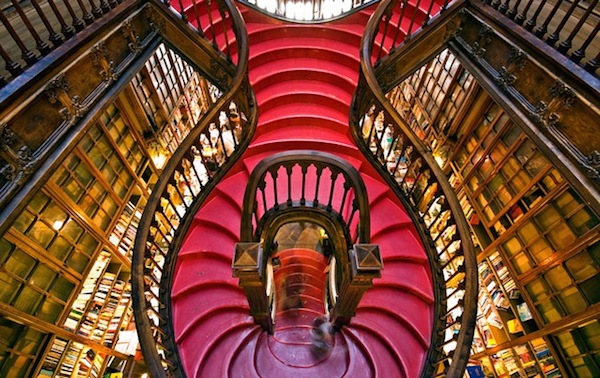 Built in 1906 by the Lello Brothers (Antonio and Jose), the Lello Bookstore gives Libreria Acqua Alta a serious run for its money, as is also called "the most beautiful bookstore in the world." It is certainly the most ornate, mixing Neo-Gothic and Art Deco elements.

The bookstore experienced several decades of disrepair, but in 1995 a massive renovation project returned it to its former glory, and now it is as much a tourist attraction as a bookstore. Carved wood ceilings, a stained glass roof, an opulent red staircase, and even a built-in wheelbarrow on rails for moving the store's 120,000 titles are all part of the store's whimsical charm.