Magic is all about misdirection, and so are these cool Halloween costumes that use false legs to help sell an illusion. They might not really be magic, but they'll leave people gasping and asking "how did you do that?" 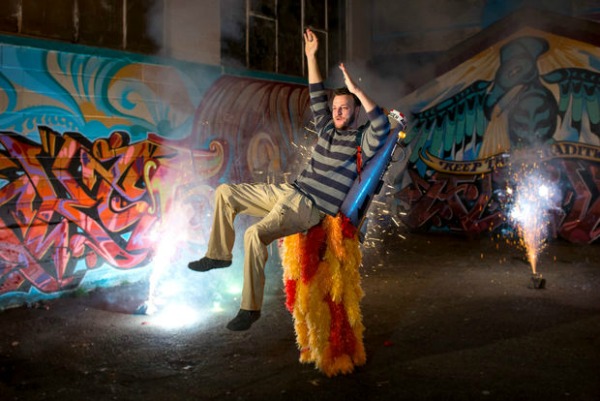 Ready to blast off? You will be when you make your own cool rocket costume. This tutorial by by mikeasaurus on instructables.com shows you how to make your own rocket blast costume complete with lights, sound and puppet effects to lift the legs off the ground when you start flying. 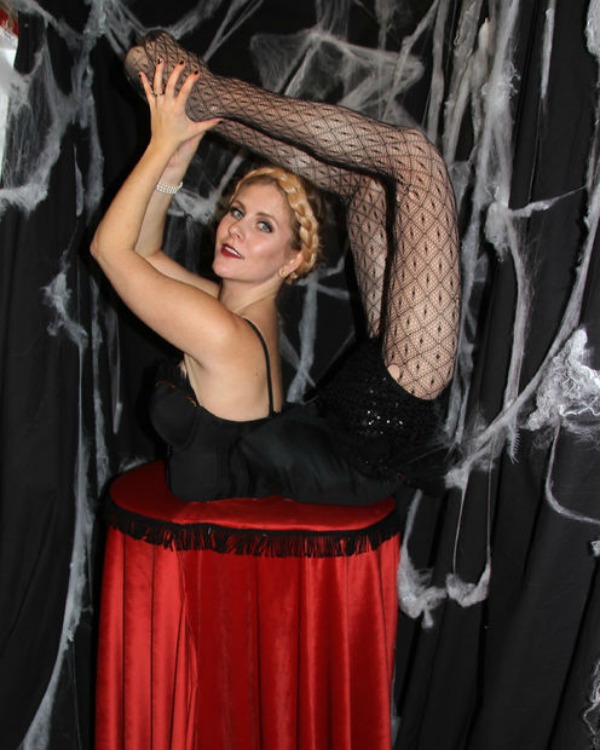 We aren't all able to contort our bodies into incredible shapes like circus performers, but anyone can pretend to be one with this cool costume by Instructables user nicemag. 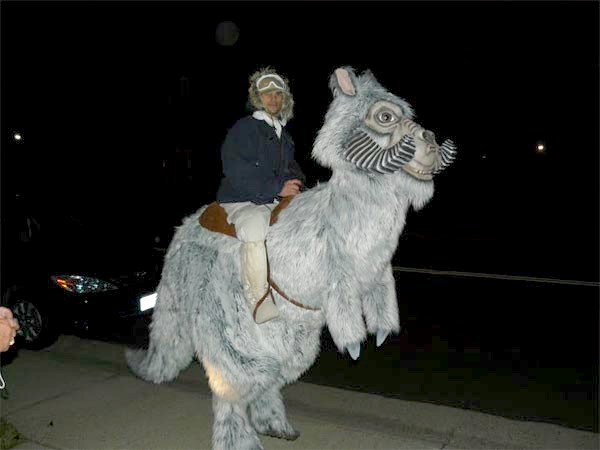 Star Wars fans will immediately fall in love with this amazing Tauntaun costume. In order to give the creature the right height, this costume is actually fitted with stilts. Scott Holden actually documents the entire creation process on his website and while you might not be inspired to copy the elaborate plans anytime soon, it's cool to see how much goes into this impressive piece of geeky greatness.

4Robot With An Alien In A Cage 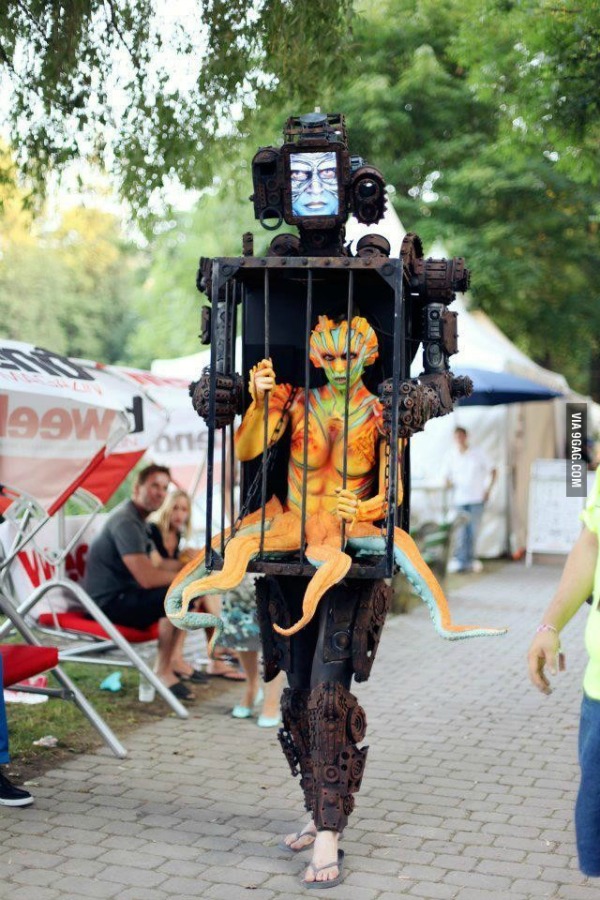 This brilliant costume combines two of the most popular elements of sci-fi, aliens and robots, into one wonderful masterpiece. The robot's brilliant video screen face emotes while the alien inside lives and breathes.

5Gorilla With A Man In A Cage 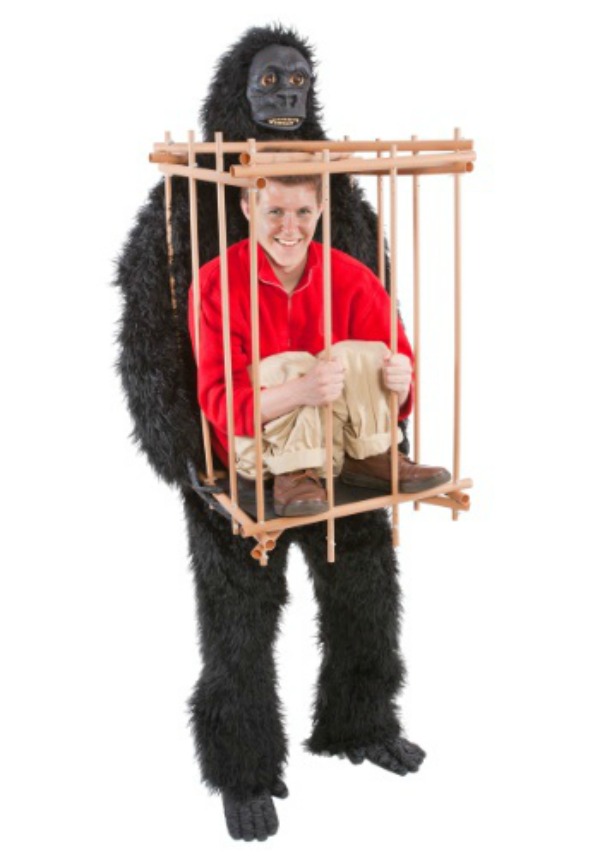 Perhaps the most classic costume of its kind, this gorilla in a cage is a funny illusion that will entertain everyone at your next party. Be warned though, it can be a pain in the butt to eat or drink anything in this get up.

6Dinosaur With A Man In A Cage

This dino carrying a man in a cage is a fun take on the classic gorilla version, though we think it could be made even better by dressing the man in caveman duds. 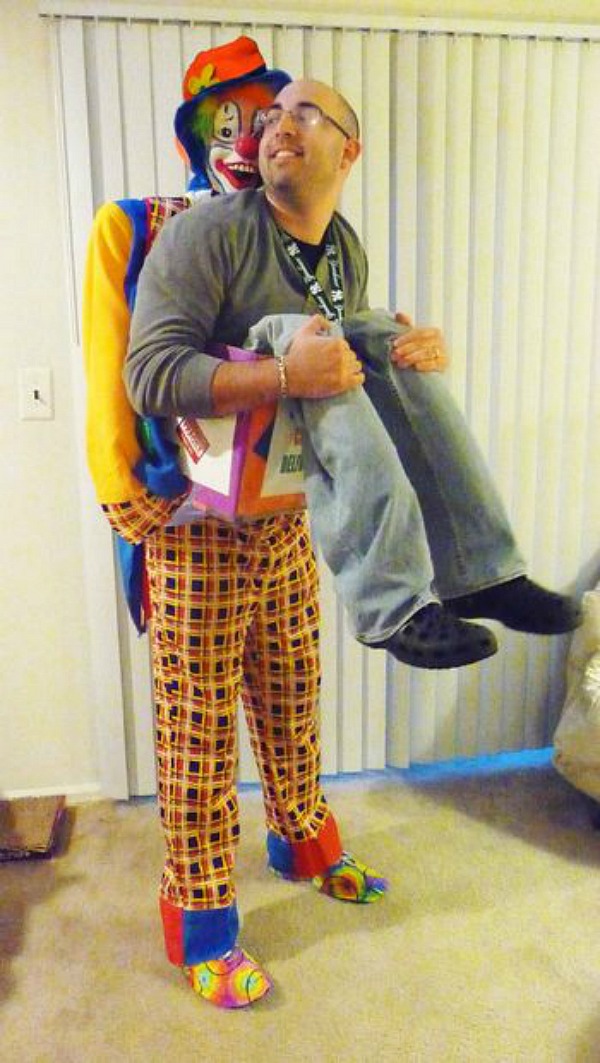 Here's a costume sure to traumatize anyone with a clown phobia – a clown carrying someone in a box. You can even make this one for yourself with the help of this Instructable by Sonata85. 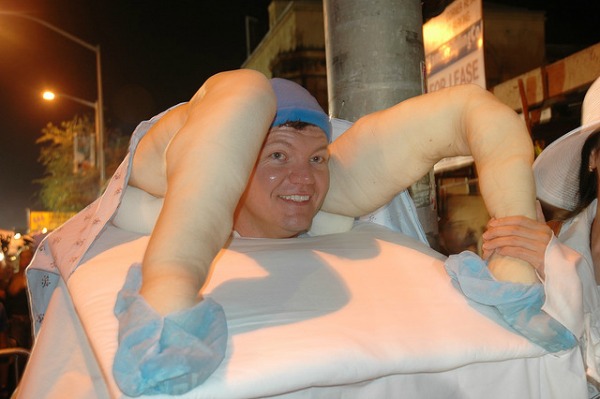 Mothers everywhere will shudder when they see this creepy birthing costume. At least the legs don't look too real, allowing it to maintain a playful silliness instead of the truly terrifying image of a grown man coming into this world. 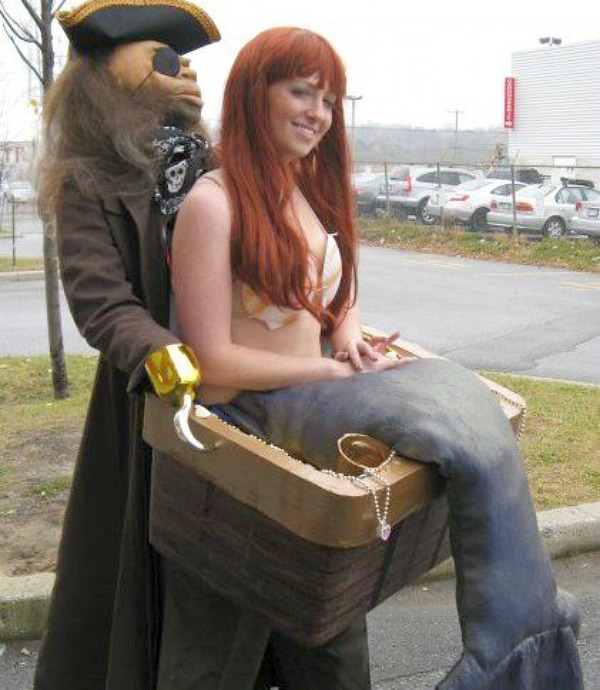 Every pirate dreams of a beautiful mermaid bride and a treasure trove of goodies. This cool costume tutorial by ModMischief lets you play the role of that lovely mermaid getting whisked away by a dirty pirate scallywag. 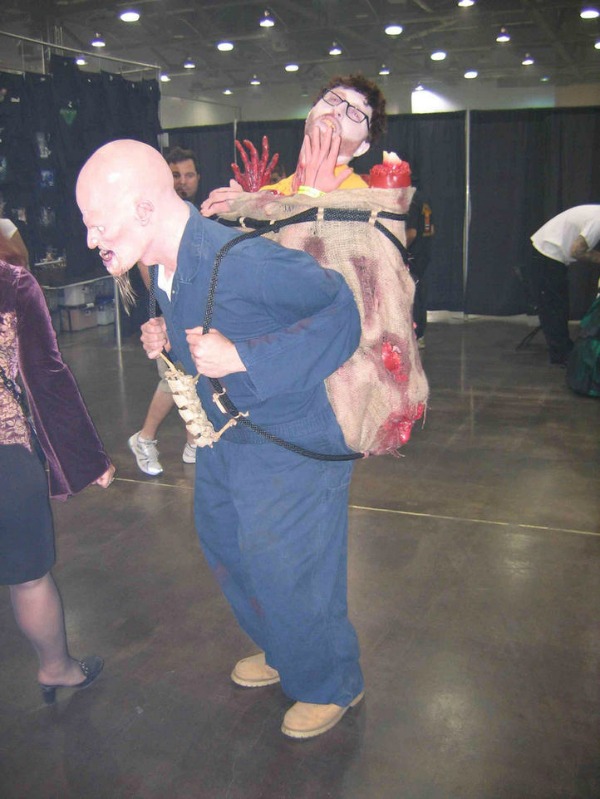 This horrifically gory costume by Halloween Forum user DeadMeat is sure to impress and terrify everyone when he strolls through the party playing the part of the dismembered victim riding in the backpack of a madman. 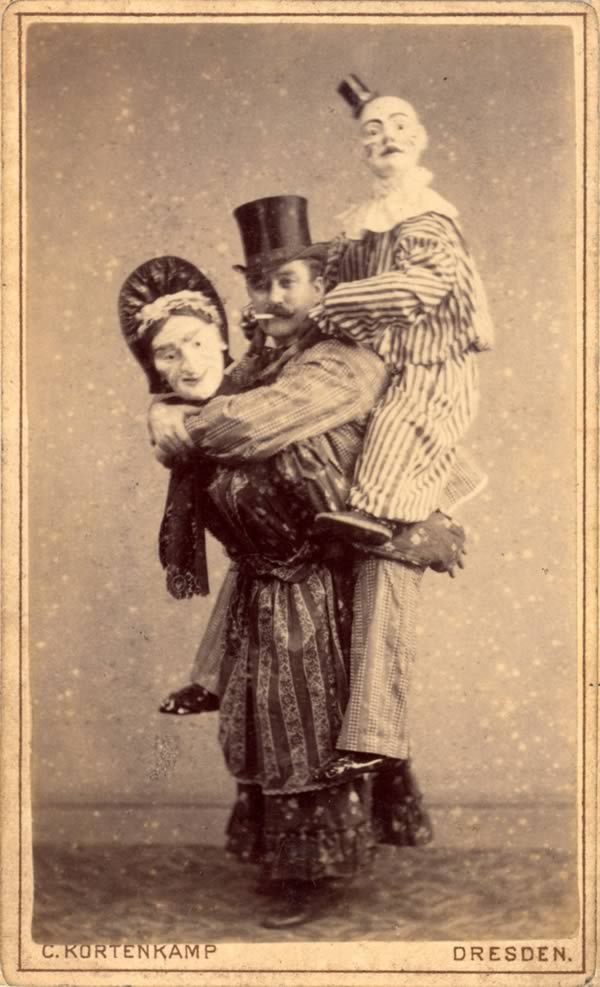 It's easy to imagine these types of kooky costumes are a modern invention, but they've actually been around for years and were once popular in vaudeville acts like this one. 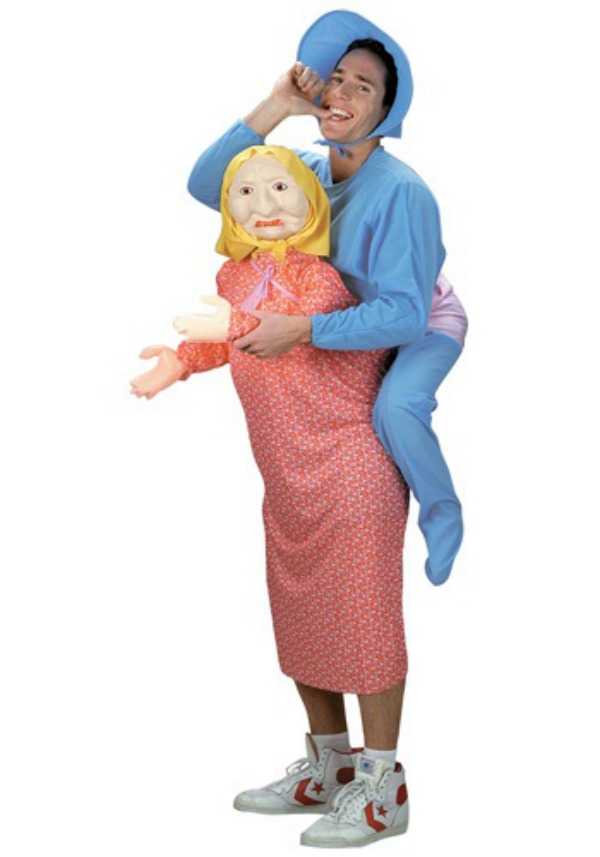 Love the idea of these types of kooky costumes but don't have the skills or time to make your own? Then check out this funny "Don't Want to Grow Up" costume. 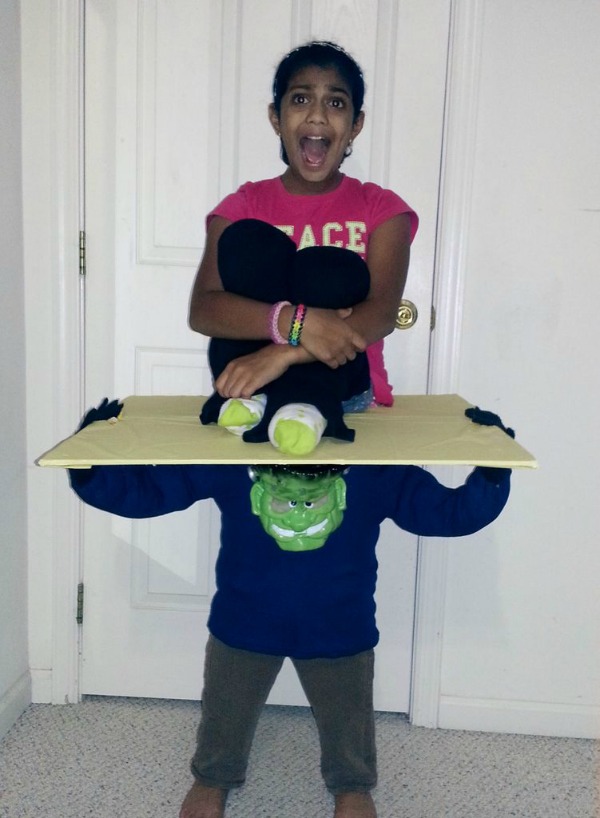 Some kids fear the monster under the bed, but this little girl decided to let one take her away for Halloween and the result is fantastic. You can replicate this one for yourself thanks to nprabhu's Instructable. 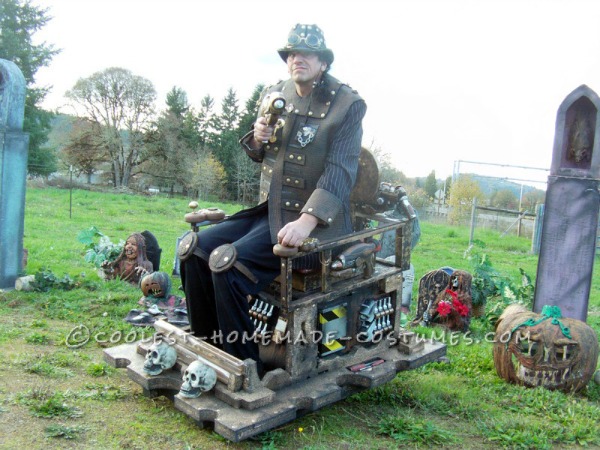 Hovering chairs might not exist yet, let alone in a world inspired by Jules Verne, but you can still fake it like Scott from Eugene, Orgeon.

Impressively, the whole rig weighs less than 20 pounds, so it's easy to wear for hours at a time. 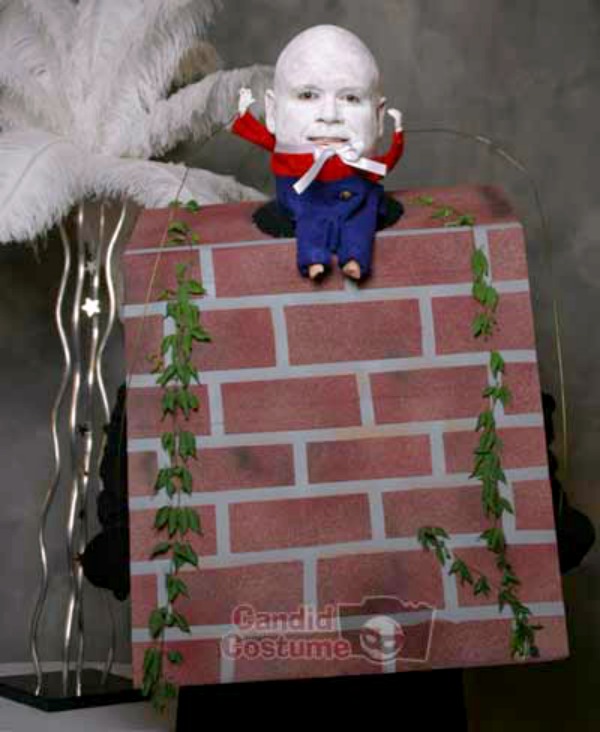 Candid Costume holds a yearly costume contest, and Humpty Dumpty by Mark Simmons was one of their first winners.