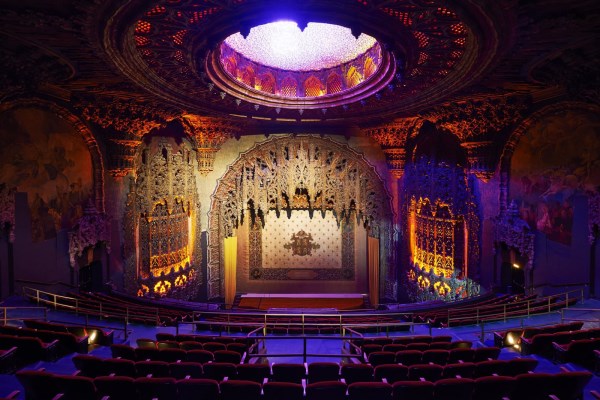 The first entry on our list is more than a movie theater, although it started its life as one. The Theatre at Ace, formerly known as the United Artists Theatre, first opened in late 1927 in downtown Los Angeles. It was commissioned by United Artists, the film industry powerhouse founded by silent film legends Mary Pickford, Douglas Fairbanks, Charlie Chaplin, and DW Griffith.

It changed hands several times after its heydey and by 1989, was no longer showing movies. Instead, the building was home to the University Cathedral, the church headed by colorful televangelist Dr. Gene Scott until his death in 2005.

In 2009, the theater was purchased by the Ace Hotel theater chain, and the renovations began. Everything was restored to its former glory, including the showstopping dome above the center of the auditorium which was fitted hundreds with LED lights. The theater's 1600 chairs where reupholstered, and a fish-scale patterned rug was installed, along with a new Deco-inspired ticket booth. There's even a connecting passageway on the theater's upper level that leads to the Ace Hotel's private banquet rooms. The beautifully restored theater is now open to the public for concerts, premieres, private screenings, conferences, seminars, performances and creative gatherings.

2The theater that prides itself on enforcing moviegoing etiquette

While there are more and more theaters sprouting up that serve food and alcohol with your entertainment, none do at as well as Austin's Alamo Drafthouse. Named "the best theater ever" by Time magazine, the Drafthouse is not only a theater, but it's also home to largest genre film festival in the United States and a collectible art gallery, Mondo, which offers breathtaking, original products featuring designs from world-famous artists based on licenses for popular TV and movie properties including Star Wars, Star Trek & Universal Monsters.

The Drafthouse prides itself on moviegoing etiquette, and has strict policies on behavior while in the theater. Kids under the age of 6 are not allowed, nor are any unaccompanied minors. It should go without saying that texting and talking are also verboten in any movie theater, but people still do it. In 2011, the Drafthouse made headlines when they turned a customer's angry rant about being ejected from the theater for texting into a PSA.

3The luxury theater in Seoul that offers VIP treatment 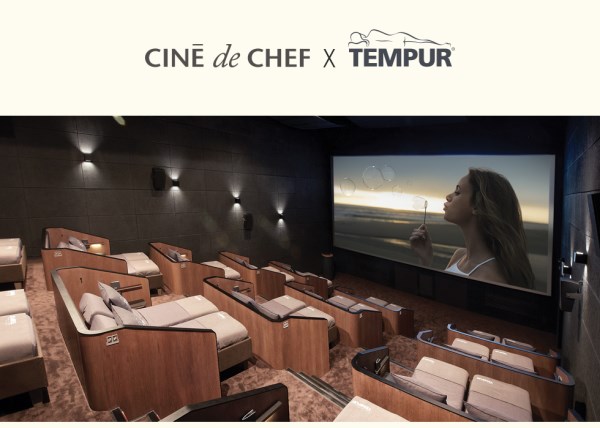 The 30-seat Ciné de Chef, a luxury theater located in Seoul's stylish Apgujeong district, boasts two high-tech screens with 11.1 surround sound and luxury seats that cost ?8 million each (US$7500) – but that's not all. Patrons are also served upscale French-Italian cuisine, courtesy of a Le Cordon Blue chef. Other services provided by the theater include valet parking, a private elevator, an escort service and English-speaking staff. Chose your date wisely, because a night at the Ciné de Chef doesn't come cheap – prices start at ?38,000 (US$34) and dinner prices start at ?60,000 (US$53). 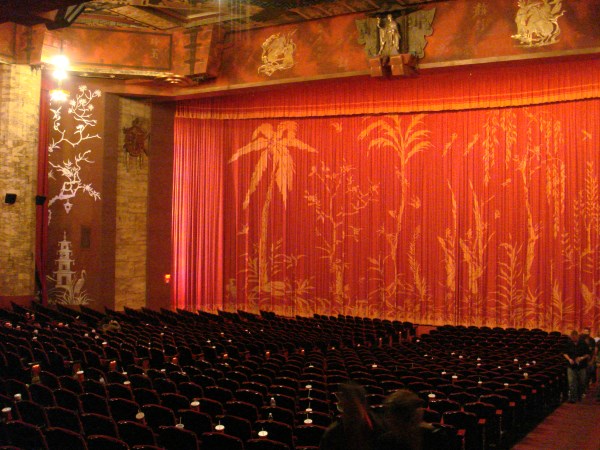 Hollywood's famed TCL Chinese Theatre is known worldwide for the footprints of stars past and present outside, but the inside is equally as impressive.

Built in 1927, the theater has been home to many premieres (including Star Wars and The Wizard Of Oz) as well as birthday parties, corporate junkets, and three Academy Awards ceremonies. The theater has changed hands over the years, and the latest owners have gone to great lengths to keep the original Asian deco design intact, while adding more modern conveniences. In recent years, the old orchestra pit was removed to accommodate an enormous 94 by 46-foot screen. Cushy stadium seating (932 seats) has been added, as has more efficient LED lighting.

In 2013, the film projector was removed to accommodate digital IMAX projectors and the theater currently ranks as the largest (seating) capacity IMAX theatre in the world. Check out the restoration below: 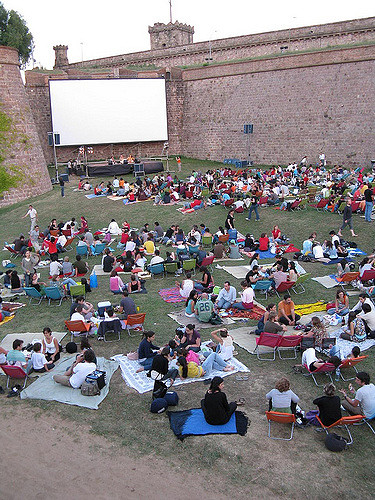 Built around 1640, Barcelona's Montjüic Castle is home to Sala Montjuïc, an openair film festival that runs for a month each summer. Movies are shown three times a week (Mondays, Wednesdays and Fridays) between June and August, and at just €6 a ticket, the festival is one of the best entertainment values in the city. If you want to settle back in the shadow of this 17th-century fortress in a deckchair, you can rent a one for €3. Food is available onsite with vendors selling hot dogs and nachos as well as beer and bottles of Cava. Picnics are also welcome.

6The revival house that is owned by a famous director 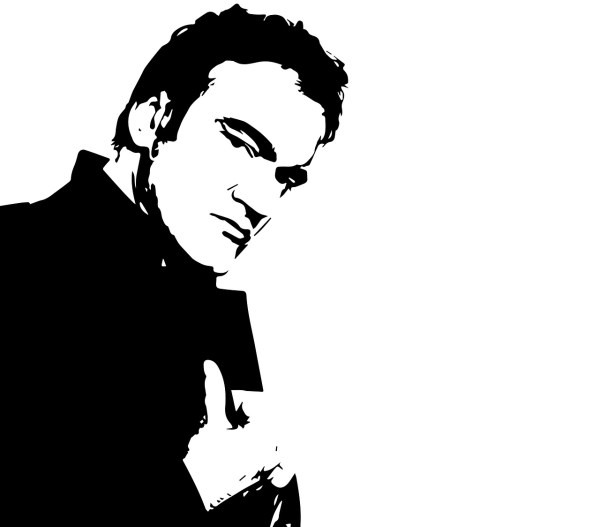 While there is nothing majestic about the look of the New Beverly cinema, it does have one thing the other movie houses don't – famed director Quentin Tarantino.

Tarantino, director of such modern classics as Pulp Fiction and Django Unchained, purchased the New Beverly after its owner died in 2007 to save it from being torn down. He took over programming duties in 2014, after the previous operator had recently purchased a digital projector for the theater. Tarantino has been very vocal about his dislike of digital and has vowed the New Beverly will only show movies in 35mm, many of which will come from his personal collection. He's so passionate about the moviehouse, he's even making mixtapes from his favorite movie soundtracks to play during intermission.

“If you're not worried about packing the house because you can't make your rent, then you can have a lot of fun,” says Tarantino. “If people come, fine. If they don't, f--k them.”

7The R.V. resort that offers a classic moviegoing experience 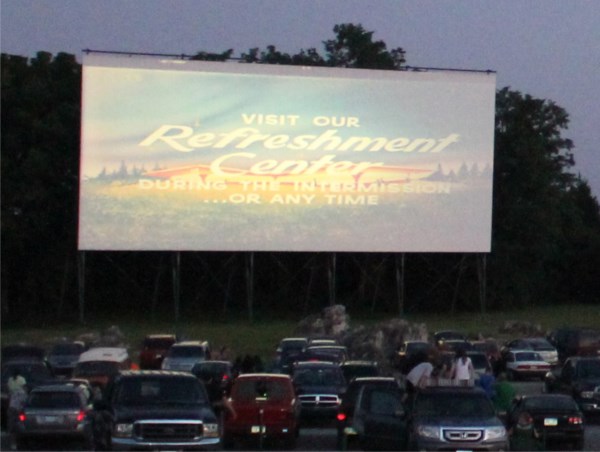 Just west of Escalante in Utah lies the The Shooting Star Drive-In and R.V. Resort. Opened in 2011, the resort features a classic mid-century drive-in movie theater. Chose from 8 custom-designed Airstream trailers, each of which bears resemblance to an old Hollywood star's dressing room – you can even thumb through your “star's” personal shooting script or try on wardrobe pieces.

The resort also borders Grand Staircase-Escalante National Monument where you can explore the 1.9 million-acre wilderness during the day while hiking, or tooling around on ATVs. At night, hop into a '64 Caddy, a '61 Rambler or a '66 Olds 98, and put the top down to enjoy a movie with pizza, popcorn and shakes, the way it was done when drive-ins were at their peak of their popularity.

8The open air film series that is held in a cemetery 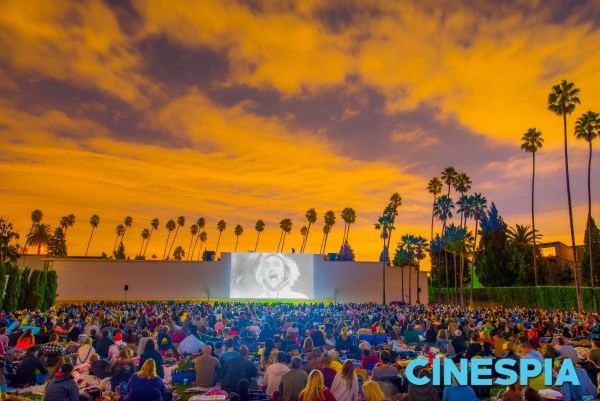 Cinespia is an organization that hosts onsite screenings of films around the Los Angeles area, the most popular of which is held at the Hollywood Forever Cemetery and runs weekly from May through September on Saturday (and occasionally Sunday) nights.

The open-air theater is held on the Fairbanks lawn (close to the crypt housing Hollywood legends Douglas Fairbanks, Sr. and Jr.). Films are digitally projected on the wall of the Cathedral Mausoleum, which houses the crypt of Rudolph Valentino and other early film greats.

Notable DJs play sets before and after the show, and patrons are welcome to bring blankets, picnic baskets, alcoholic beverages and candles to make the night complete. Vanity Fair says the Hollywood Forever series, “captures the excitement of a drive-in movie date night of the 1950s, but with a decidedly campy twist.”

9The world's oldest outdoor cinema that is still in operation 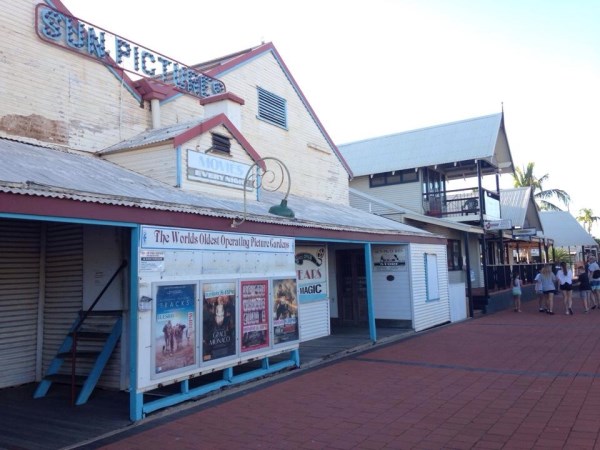 Originally an Asian emporium, the cinema officially opened as a silent movie theater in 1916 and has stayed open despite obstacles including war time bombings, tidal floods, cyclones and even a period of racial segregation. Replete with lawn chairs and memorabilia, the theater continues to screen multiple films a night almost a hundred years after its humble beginnings, despite being located under the flight path to the runway at Broome airport.

10The luxury cinema that comes with double beds 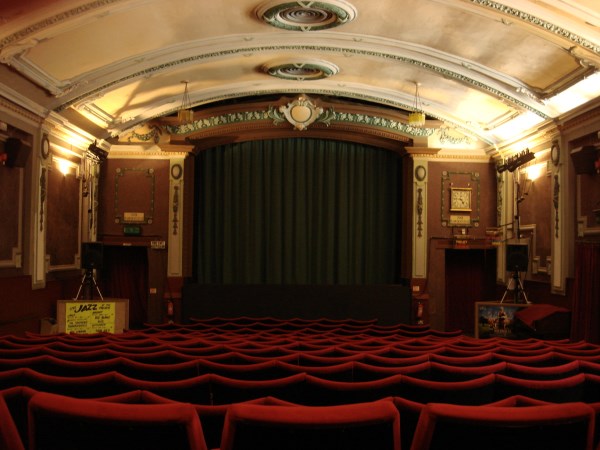 The 102-year-old Electric Cinema, located in London's fashionable Notting Hill, was refurbished by the Soho House group into a luxury theater with leather seating, footstools, tables for food and drink and two-seater sofas, but its most unusual feature lies (literally) in its double beds that make up the front row. Couples can get cozy under a cashmere throw and watch a movie, but please, no hanky panky. You'll be in full view of the rest of the theater patrons. Bed tickets are cheaper at £18 per person compared to £20 per person for regular tickets.