1Daniel Day-Lewis pushes the boundaries for every role he undertakes 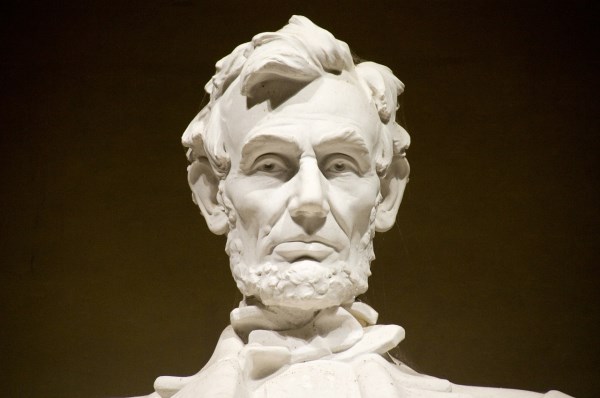 Daniel Day-Lewis is one of the greatest actors in history or one of the most insane depending upon who you talk to. How far has Day-Lewis gone to immerse himself in a role? Let's take a look:

- For his role as paralyzed poet Christy Brown in My Left Foot (1989), Day-Lewis refused to move from his wheelchair and had the crew lift him over obstacles. He insisted his meals be spoon-fed to him. Several weeks of slouching in the wheelchair resulted in two broken ribs and a Best Actor Oscar.

- For his role as Nathaniel Hawkeye in Last of The Mohicans (1992) Day-Lewis lived in isolation in the Alabama wilderness where he tracked, hunted and skinned animals for food. As director Michael Mann told Time magazine: “If he didn't shoot it, he didn't eat it.”

- As Abraham Lincoln, the 16th President of the United States, Day-Lewis prepared for a year before shooting began and stayed in character even when the cameras weren't rolling. He demanded that everyone on set – including director Steven Spielberg – call him "Mr. President" and would not let English cast members speak to him in their own accents, for fear that it might throw him off.

A real pain in the butt to work with to be sure. However, Day-Lewis' dedication to his craft has certainly paid off, earning him another Best Actor win for Lincoln (2012).

Check out Daniel Day-Lewis doing what he does best: 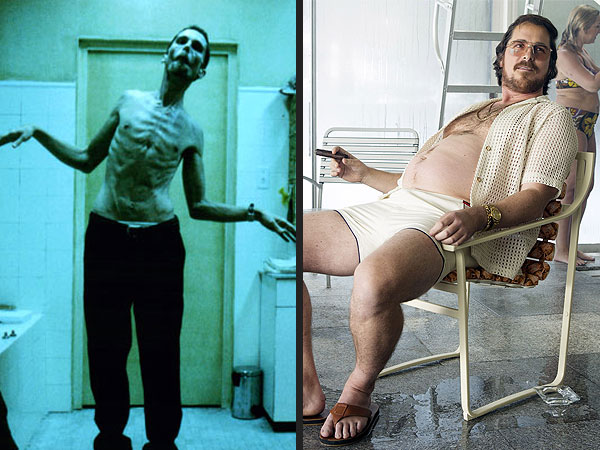 Actor Christian Bale's weight fluctuates with his roles. For The Machinist (2005), Bale dropped a whopping 63 pounds and it was not at the request or demand of the director.

At 6 feet tall he weighed 185 pounds, which is average for his height. For The Machinist, Bale received virtually no weight loss guidance. After meeting with a doctor only once, he simply took matters into his own hands.

His diet consisted of one can of tuna and one apple per day. Bale thought as long as he felt okay he could simply keep going. He reached 120 pounds and it's rumored that he wanted to go even further, but producers warned him against it, fearing it would seriously damage his health.

Less than five months later, Bale bulked up for his role in Batman Begins (2005) by gaining almost 100 pounds. His weight gain was healthier than his previous weight loss – he ate a high-carb diet and returned to a regimen of three-hour training sessions to gain 60 pounds of muscle and eventually added on another 39 pounds during filming.

3Did Heath Ledger's role as The Joker eventually kill him? 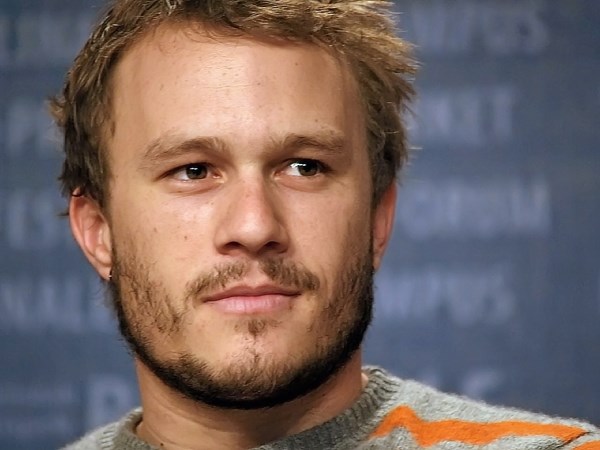 Another actor in the Batman franchise, Health Ledger, also took his craft seriously, but his immersion may have played a part in his death.

To play Batman's arch-nemesis The Joker, Ledger locked himself in a hotel room for a month and barely slept. He created a diary filled with images of clippings from Batman comics, pictures from Stanley Kubrick's A Clockwork Orange, playing cards, pictures of clowns and more.

As shooting commenced, Ledger told reporters he "slept an average of two hours a night" while playing "a psychopathic, mass-murdering, schizophrenic clown with zero empathy. I couldn't stop thinking. My body was exhausted, and my mind was still going."

By the time he started his next movie, The Imaginarium of Doctor Parnassus, Ledger was suffering from chronic insomnia, pneumonia, and exhaustion. On a break from the movie, he went back to New York to recuperate, but on January 22, 2008 he was found dead from what is believed to be an accidental overdose.

Side note: Did Ledger get the voice for The Joker from an Australian interview singer Tom Waits did in 1979? You be the judge: 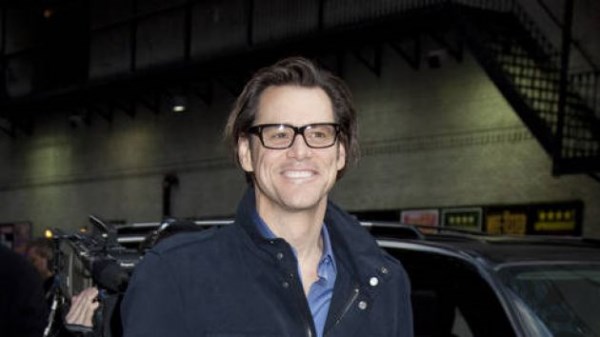 During the shooting of the 1999 biopic Man On The Moon, which details the life and death of comedian Andy Kaufman, actor Jim Carrey refused to ever break character. He wouldn't respond to anyone on set unless they referred to him as Andy or Tony (Tony Clifton, Kaufman's alter ego). As Clifton, a third-rate Vegas lounge singer with a purposely repulsive personality, Carrey would put Limburger cheese in his pockets so he smelled horrible.

For Man On The Moon, Kaufman's real life feud with WWE wrestler Jerry Lawler was re-created. The men gained national attention after a joint interview on Late Night With David Letterman. The interview ended with Lawler slapping Kaufman and Kaufman throwing coffee in Lawler's face.

Lawler was brought in to play himself in Man On The Moon. Carrey was so set on experiencing everything Kaufman experienced that he demanded Lawler put him in the same wrestling hold that landed Kaufman in the hospital for three days. The insurance company refused to allow this and when Carrey approached Lawler secretly and begged him to do it, Lawler told the production.

Denied his right to a piledriver, a furious Carrey spit in Lawler's face and a fight ensued, giving Carrey the moment of realism he wanted. Lawler was fired, then rehired. When they re-created the famous interview, Lawler didn't hold back. The slap you see here is real:

5Rooney Mara gets pierced for The Girl With The Dragon Tattoo

When actress Rooney Mara landed the part of computer hacker Lisbeth Salander in The Girl With The Dragon Tattoo (2005), she didn't even have ear piercings. She felt that to truly inhabit the character, multiple piercings all over her body were necessary.

Mara had her lip, brow, nose, nipples and ears pierced. She said, "because of all the tattoos and the makeup and the piercings, and the physical transformations my body has to go through, it would always feel sort of like I was in costume, even if I was naked."

While Min-sik Choi is not as well known to worldwide audiences as the other actors on this list, he is no less dedicated to his craft and may even exceed Daniel Day-Lewis in the insanity department.

Take for example Oldboy (2003), in which Choi plays Dae-su Oh, a man imprisoned for fifteen years who, once released, exacts revenge on his captors.

In Oldboy, Choi's character Dae-su counts off the years spent in confinement by burning his flesh with a hot wire. Though the act could have been mimicked with make up and special effects, Choi felt that wouldn't be adequate enough and burned himself repeatedly.

Once freed from prison, Dae-su makes his way to a restaurant where he asks to eat something alive. He is brought a living octopus – not a prop. To film the scene, Choi killed and ate several live octopods. Each retake was torture for the actor, who is a committed Buddhist. Before he killed the animals, Choi said a prayer to each one in apology for taking its life. According to director Park Chan-Wook, it took the actor a long time to recover from the experience. 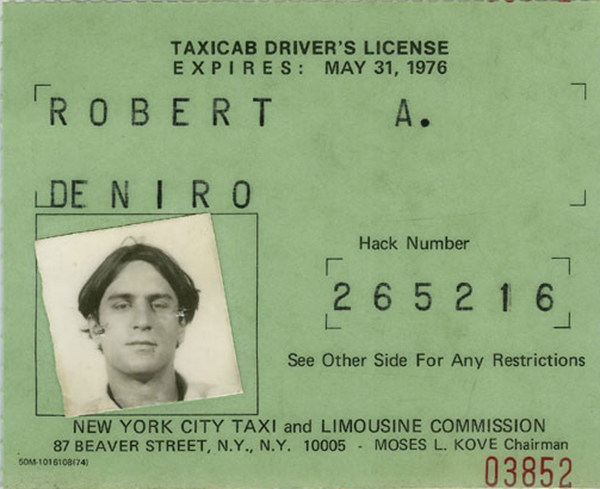 Long before run-of-the-mill comedies like Meet The Fockers (2004) were part of his repertoire, Robert De Niro's immersion into his characters rivaled that of Daniel Day-Lewis.

- For Raging Bull (1980), De Niro gained 60 pounds to play middleweight boxer Jake La Motta. He also endured rigorous boxing training, administered by none other than LaMotta himself. Director Martin Scorcese feared for De Niro's life after he started to suffer from respiratory problems due to his excessive weight gain and production was shut down for a time. De Niro received a Best Actor Oscar for Raging Bull.

- While shooting Taxi Driver (1976), De Niro obtained a cab driver's license (pictured above) and picked up fares while on breaks from the movie.

- Wearing prosthetic teeth wasn't enough for De Niro to get into the mindset of Cape Fear(1991) sociopath Max Cady. To play him, De Niro underwent a complete transformation, which included paying several thousand dollars to have his teeth ground down and deformed.

8Al Pacino makes a citizen's arrest on a trucker 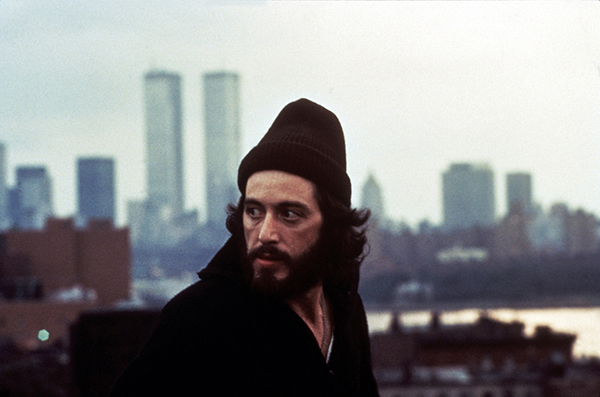 Legendary actor Al Pacino is also known to become heavily immersed in his roles. In Serpico (1973), Pacino plays Frank Serpico, an undercover cop who exposes corruption in the force. Rumor has it that Pacino was so heavily invested in the part that while he was driving (not on film, but in real life) he saw a truck in front of him spewing exhaust. Pacino pulled the driver over and attempted to make an arrest.

Pacino's Method madness didn't end there. On Scent Of A Woman(1992), Pacino claimed that he actually couldn't see during filming, much like the blind character he was playing. Some weeks after the completion of principal photography, Chris O'Donnell received a note of congratulations from Pacino: “Although I didn't see you, I know you were great.” 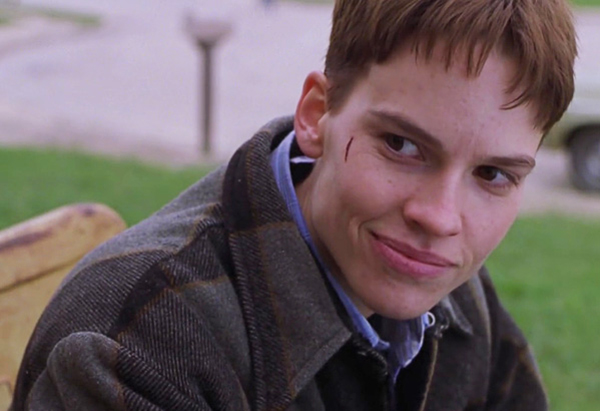 Several actresses auditioned to be Brandon Teena, a female-to-male transgender who was murdered in 1993 and the main character depicted in 1999's Boys Don't Cry. Hilary Swank showed up in her then husband's clothes and a cowboy hat and landed the role.

A month before shooting, Swank lived as a man. She cut her hair short, bound her breasts and even stuffed a sock in her underwear – "trying to disguise my femininity as best as I could" – to pass as a boy. She spoke low voice, and introduced herself to neighbors and friends as Hilary's brother, James.

Like most on our list, her dedication paid off – she too won a Best Actress Oscar in 2000. 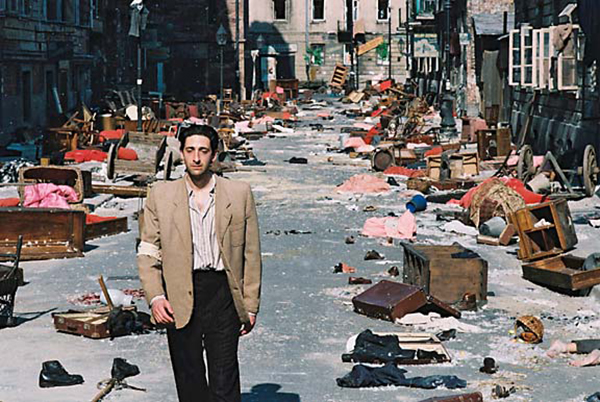 In 2003, a then 29-year-old Adrian Brody won a Best Actor Oscar for his role in Roman Polanski's Holocaust drama, The Pianist.

To get closer to Wladyslaw Szpilman, the real life concert pianist who survived the horrors of the Warsaw ghetto, Brody immersed himself in the character's trials and tribulations. Polanski insisted he practiced piano four hours a day in preparation. By the end of those sessions, he was able to play specific passages by Chopin.

Brody took things a step further to achieve the mindset of man who lost his family and home – he stripped his life back to basics to get rid of the detritus of comfortable living. He gave up his home, his car, his girlfriend and most of his belongings before moving to Europe.