The result of centuries or even millennia of windblown sand, sand dunes occur all over the world, from arid desert regions left over from prehistoric lakes and ocean beds to the barrier between land and sea. Sand dunes have spent the ages protecting the earth from harsh winds and rising waters, and providing unique habitats for countless species that have adapted to the rough, sandy environment. When it comes to size and structure, as with any mountain, some rise above the rest.

Regardless of whether it's going by Pyla or Pilat, this massive mound sitting smack dab in the middle of a huge pine forest, the Atlantic Ocean, and France's Arcachon Bay is the tallest dune in Europe. At its summit, from which the view of the surrounding collision of nature is spectacular, this great dune stands at over 100 meters tall, rising a full 350 feet straight up out of the water. Exactly how it came to be is a mystery, but it's one of France's hidden tourism treasures.

Rising up out of the Namibian soil over 1000 feet, the sand dune called Big Daddy draws in tourists and locals alike to spend a day climbing its rusty red face. Some do it for the unbeatable view, others for the bragging rights. Being the highest dune in Sossusvlei is no small feat, and although Dune 7 (located along the Tsauchab River) is the tallest in the Namib Desert, climbing Big Daddy remains one of the top things to do in this arid desert environment. That's probably because saying, “I hiked all the way up Big Daddy” sounds a lot more interesting than spending a day climbing up Dune 7. 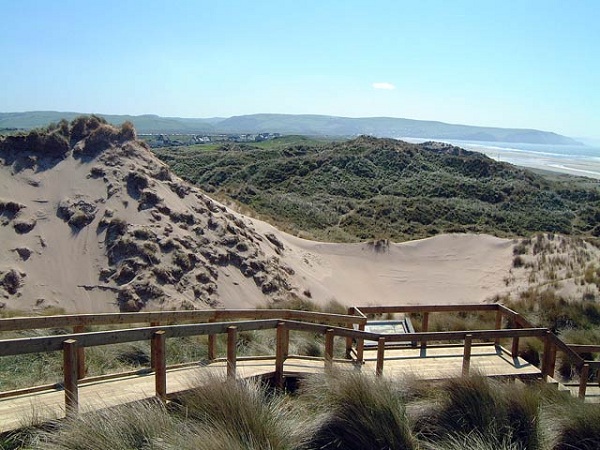 Pronouncing the name of the Ynyslas Sand Dunes might be hard, but the choice to visit is a no-brainer. Providing some of the best views in Wales from their place just at the edge of earth and sea, Ynyslas is an ever-changing tapestry of color and form, with wildflowers painted along the seaward face in the summertime and a crest that continues to rise millimeters per year as the wind continues to whip more material into place. Beyond the beauty of the dunes, Ynyslas also provides needed protection to the ecosystem of the area, forming a sandy wall between the inland plant life and the harsh winds from the ocean.

If you intend to hit these dunes, it might be a good idea to bring some headphones. The Badain Jaran Desert in China is home to the tallest stationery dunes on the planet, some more than 1500 feet at the crest. Held in place by water somehow seeping in from the lake below, the exact properties of these dunes aren't precisely understood, but it's hardly their most interesting feature. Beyond the secret of water absorption, Badain Jaran is also home to a phenomenon called “singing sands,” in which the topmost layer of sand is believed to cause an electrostatic charge in the sand below when ripped away by wind, resulting in a massive low-frequency booming noise similar to that of an airplane propeller passing overhead.

Australia's Mount Tempest may be one of the highest in the world, and claims the title of the highest coastal dune altogether, but that's not what keeps tourists flocking to Queensland for a chance to hike the once-barren slope. The dune is held stationary by plant-life which is rooted deep into the sand, and the view from the top is a sight for day travelers and professional photographers alike, offering a panoramic view from the Sunshine Coast clear to Brisbane.

One of a handful of dunes worldwide that stand over 1000 feet high, Iran's Rig-e Yalan Dune stakes its claim to fame not with height, but with temperature. Located within miles of the hottest place on earth, the desert which this massive dune calls home is known to reach temperatures in excess of 150 degrees Fahrenheit. While it's probably a little cooler at the crest of Rig-e Yalan, hiking in temperatures hot enough to cook eggs is generally discouraged.

Nestled alone between the coastal and high Andes in South America, Cerro Blanco is usually considered to be the single tallest sand dune on the planet. The only dune in the area, the white sand thrusts close to 7000 feet up from the rocky mountains and valleys surrounding it. While it's believed to have been a sacred place in Incan times, today the giant dune is usually used by tourists as the perfect spot to learn how to sandboard and tool around in a sweet off-road vehicle.

While less than one percent of Death Valley is covered in dunes, Mesquite Flats is probably the first image that springs to mind when the valley is mentioned. No claim to fame in height, with the tallest being less than 100 feet high, the dunes are nonetheless massive in that they spread out for miles, giving locals and visitors alike plenty of room to walk around.

South Arabia's Rub` al Khali (literally translated as “Empty Quarter”) covers a quarter of a million square miles, with sand dunes rising from the earth like waves in the sea, interspersed between vast plains of gypsum. Taking a trip to these dunes is enough to make you feel like Lawrence of Arabia, sitting on top of a 250-foot-tall mountain of quartz-rich reddish sand with nothing but desert as far as the eye can see.

No list of dunes would be complete without mention of Colorado's Great Sand Dunes. While they're not the largest in the world, or even the most vast, the Great Sand Dunes are part of a collision of nature unlike any other. Arid dunes slope down into the crisp Medano Creek on one side and rise up with the rocky blue mountains on the other. Because the sands here are so soft and spread out for such a great distance—30 square miles —it's a great spot for sand boarding, sand sledding, and just sliding down like a kid in a playground.