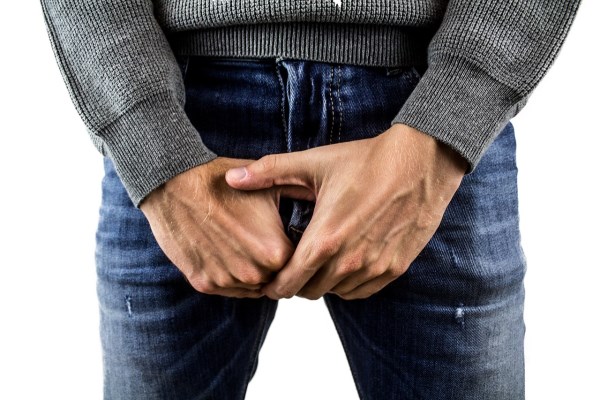 Would you sell a body part for a new car?

Mark Parisi would. He appeared on CBS' show The Doctors to discuss his plans to sell his left testicle for $35,000. But he's not selling his testicle for any old reason; he wants a new car. Specifically, he wants a Nissan 370Z, described on Nissan's website as “a serious car for serious drivers.” Agreed, because you have to be pretty serious to want to sell a body part in order to buy a new car. Luckily for Mr. Parisi, the sticker price for the Z cars hovers between $30,000 and $45,000.

2The Chinese Student Who Sold a Kidney for an iPad 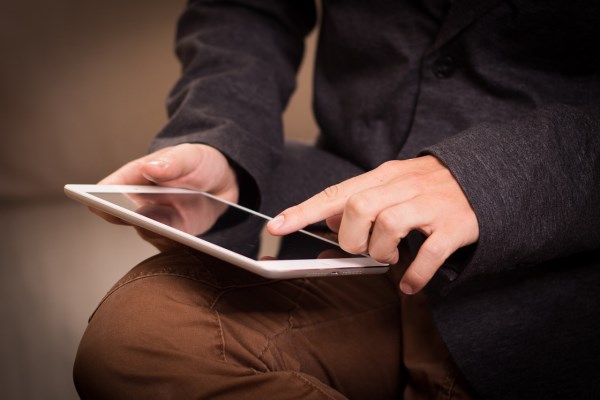 Five people were charged with intentional injury to a Chinese teenager who was so desperate to buy an iPad and an iPhone that he sold his kidney for just over $3,300.

The accused, who live in southern China, include a surgeon who removed a kidney from a 17-year-old boy in return for around 220,000 Yuan, or $33,000. Prosecutors in Chenzhou City, Hunan province, said that one of the defendants received the money to arrange the transplant. He paid the teenager only 22,000 Yuan, then split the rest with the surgeon, the three other defendants, and other medical staff.

The teenager, identified only by his surname Wang, comes from Anhui, one of China's poorest provinces, where inhabitants frequently leave to find work and a better life elsewhere. Following the surgery in 2011, Wang bought an iPhone and an iPad. When his mother quizzed him on how he funded the sought-after goods, he admitted to selling a kidney. It is not known who received and paid for the kidney.

3The Couple Who Sold Their Baby to Buy an iPhone 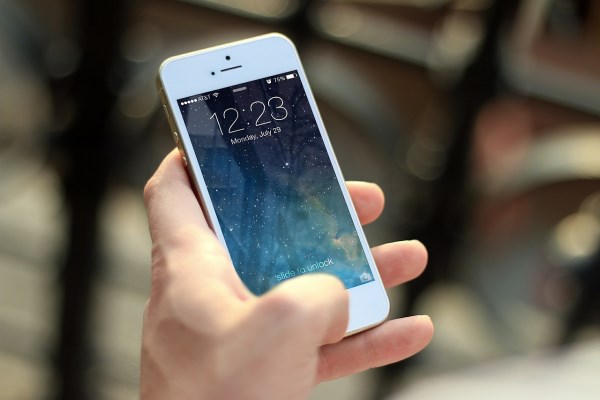 A young Chinese couple may face many years in jail after allegedly selling their baby daughter to raise money for an iPhone and other luxury goods. The couple, identified only as Miss Zhang and Mr. Teng, are said to have placed anonymous advertisements in newspapers suggesting that they would be willing to part with their baby - unborn at that stage - in exchange for 50,000 yuan (about $8,000).

Police in Shanghai later charged the couple with human trafficking after they accepted money for the baby, who was born at home and was still only weeks, or months, old when sold.

The couple said in court that that they were acting in the child's best interest. They didn't have steady incomes and would have had difficulty caring for the child. They hoped that by auctioning her off the child would be placed in a good, stable home and receive a good education.

However, one credit card bill showed that immediately after the baby was "traded" in, the couple spent large amounts of cash during an online shopping spree, which included the purchase of an iPhone and a pair of "high-end" sneakers. 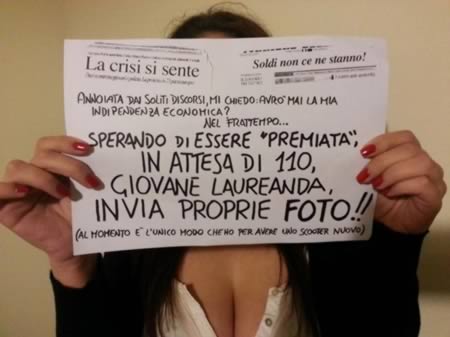 A hard-up Italian law student is selling naked pictures of herself online to raise cash for a new scooter.
Mary says that her beloved moped "is close to its end" and that she desperately needs money to buy a new set of wheels.

With jobs in her native city of Naples hard to come by, she's set up a Facebook page to drum up some funds. No pictures of her in the buff actually appear on the social networking site.

Instead, she is seen holding a board in front of her face on which she's written details of her unique deal. She's also distributed fliers around the city. Staff at the University of Naples Federico II found out about her racket after being contacted by concerned parents.

But Mary, who has not revealed her surname, insisted that she was doing nothing wrong, and that she's already had "lots" of sales. 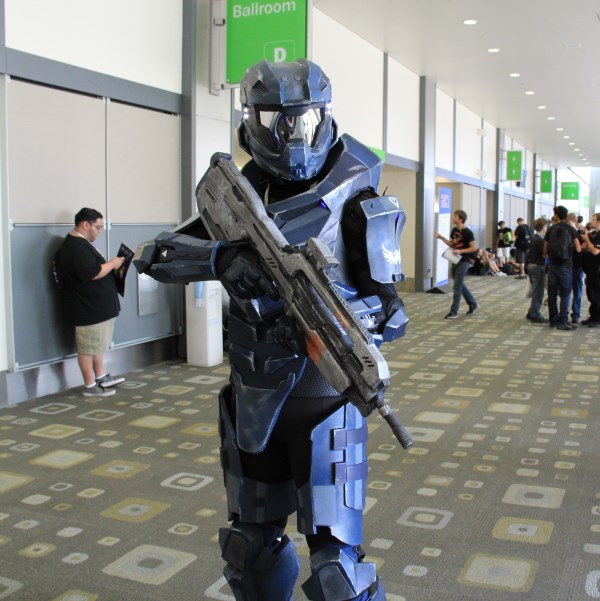 Eric Smith found himself devastated after his long-time girlfriend confessed to cheating and broke up with him. At the time, Smith was prepared to propose to his now ex-girlfriend and had even obtained her perfect image of an engagement ring. After the breakup, the engagement ring remained in his closet for months. Due to the unpopular design, he was unable to sell the ring in-person to anyone, but did find a buyer on eBay and shipped off the unused jewelry.

With a substantial amount of money sitting in his Paypal account, Smith decided to get rid of the cash to destroy any lingering memory of the ex-girlfriend. While Smith still had graduate school loans to take care of, he decided to spend the entire amount on a complete set of wearable Master Chief armor from the popular Halo series.

Designed by an armor builder based out of the Philippines who's known for Stormtrooper designs, the helmet utilizes LED lights and has the shiny golden sheen typical of Master Chief's armor. The various parts of the suit arrived in seven shipments over eight months.

Since the purchase of the armor, Smith likes to walk around as Master Chief at various conventions. It takes two people to help Smith put on the armor, and he has to walk around slowly to avoid breaking any section of the armor. According to Smith, he doesn't regret the decision to spend all proceeds from the sale of the engagement ring on the set of Halo-inspired armor. 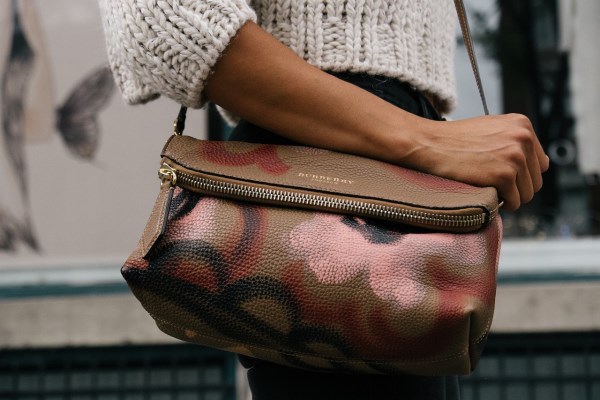 It's no longer just women who go crazy about buying designer or brand-name handbags. It seems that men are joining the craze, not for their own closets but for those of their romantic partners.

However, the prices of the handbags are so high that some men adopt extreme measures, like the 27-year-old Park. “Some time ago, I sold one of my kidneys to get money to buy a Hermes Kelly bag as a present for my girlfriend for our first anniversary,” said Park.

Despite working a couple of part-time jobs and working as a private tutor for three months, he still did not have enough money for the Hermes bag. Desperate, he responded to a note on the toilet wall of a general hospital that read, “Looking for human organs.”

Today, Park realizes that what he did was in vain. “I broke up with her after that, and I regret doing such a thing,” said Park. Go figure.

7The Man Who is Selling His House for Bitcoins 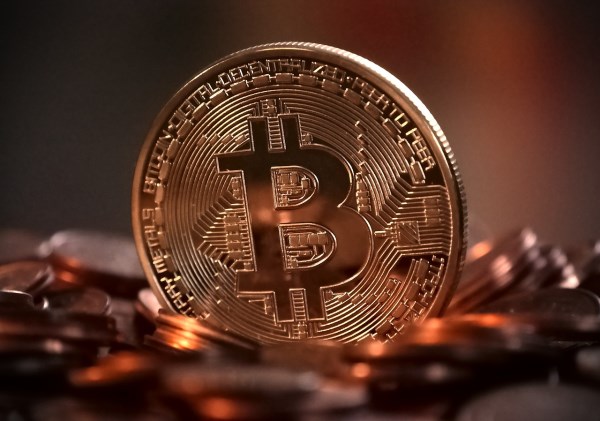 There's no doubt that the housing market is tough. So like most things these days, a man wants to add a technical spin to it by selling his house for digital currency.

Bitcoins are a peer-to-peer decentralized digital currency system that began surfacing over the last few years. Essentially, they're virtual coins that you can send through the Internet. Unlike government-backed currencies, Bitcoins have no central user, so transactions can be completed without "middlemen."

8The Girl Who Sold Her 5.2-Foot-Long Hair to Buy Her Parents a Home 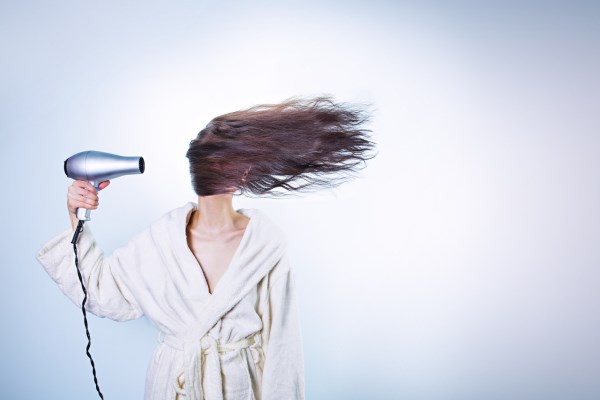 Natasha, who lives in a shanty town in Rio de Janeiro, was previously unable to do things enjoyed by other children, such as going to the beach.

It took four hours every week to wash her hair and an hour and a half to brush every day, making her life miserable. Now, she has had it all hacked off into a simple bob of just 40cm long, and washing her hair only takes five minutes.

While Natasha previously slept in a tiny, windowless room, she got B$9,000 (about $4,500) from selling the hair for extensions, which she has put towards a new home for her family. 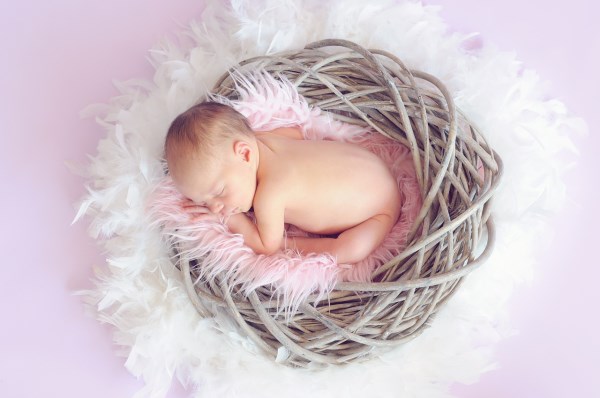 This mother tried to sell her newborn son for $15,000 to afford a trip to Disney World.

Delaware mother Bridget Wismer, 34, planned to use the money paid by 55-year-old John Gavaghan to take her other two children to the theme park. She even falsified her one-month-old's birth certificate to list Gavaghan, who has a criminal record, as the boy's father.

Bridget and John were arrested after Bridget's grandmother informed authorities that baby Christian was sold to John and his longtime partner, Antonio. Authorities were tipped off that Bridget was trying to sell the baby because she did not want it and needed money for a trip to Disney World.

10The Man Who Sold His Wife to Buy Liquor 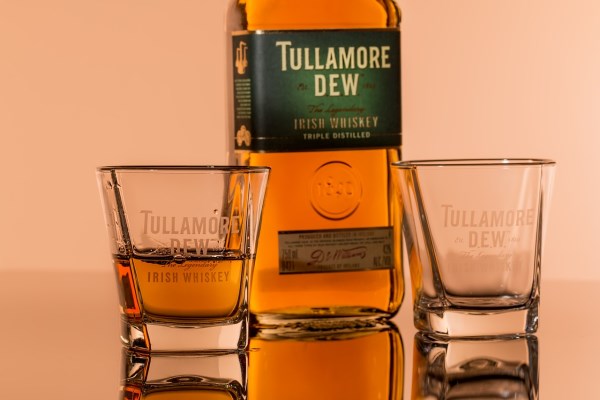 An alcoholic man from India was arrested for allegedly selling his wife to a friend for Rs.25,000 in order to finance his drinking.

The incident occurred in June 2013 in the town of Akola, 625 km from Mumbai in Vidarbha, where Pundlik Chavan "sold" his wife Sangita to his friend Ganesh Walode.

This came to light when the woman's sister filed a complaint with the police. Pundlik Chavan was arrested, while Sangita admitted in front of police that she was in a relationship with Ganesh Walode, since she married him after being sold.